I’ve wanted to host movie nights with a projector and screen in my backyard all my of life. Alas, as a longtime condo and apartment dweller, I did not actually have a yard.

That changed recently when I moved with my family into a nice St. Paul, Minnesota, house with a big yard suitable for all kinds of social gatherings.

Jumping at the chance to create a memorable event for friends and neighbors, I set out to acquire and master the technology required for this.

I ended up putting on three movie nights, the first two screening “Frozen” for kids in my social circle, since these tykes skew female and Elsa-obsessed, and the third a showing of “The Matrix” for my 16-year-old son. 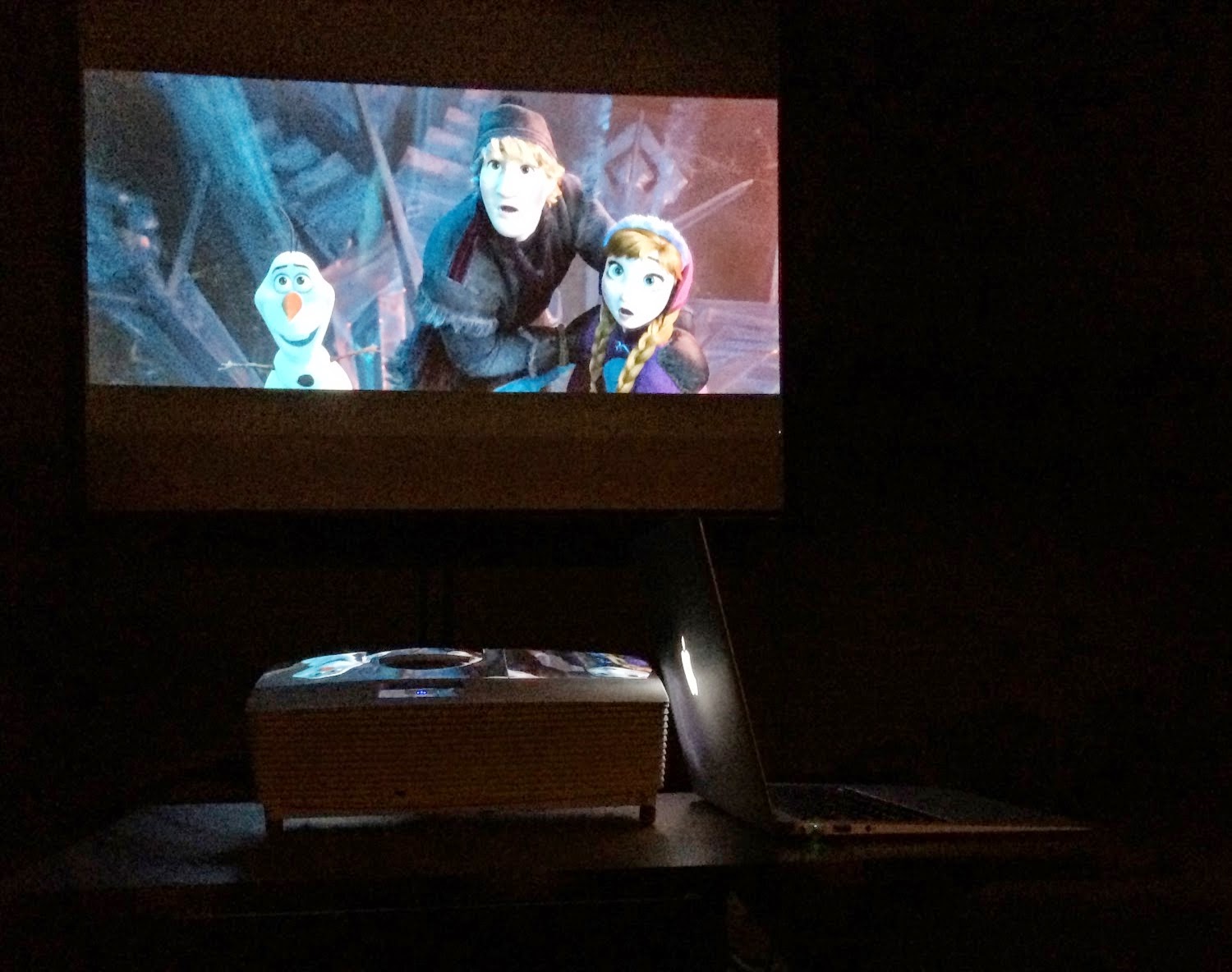 The nights were magical, with the little girls in princess outfits and glow-stick headbands singing along to “Let It Go” and the other “Frozen” tunes. 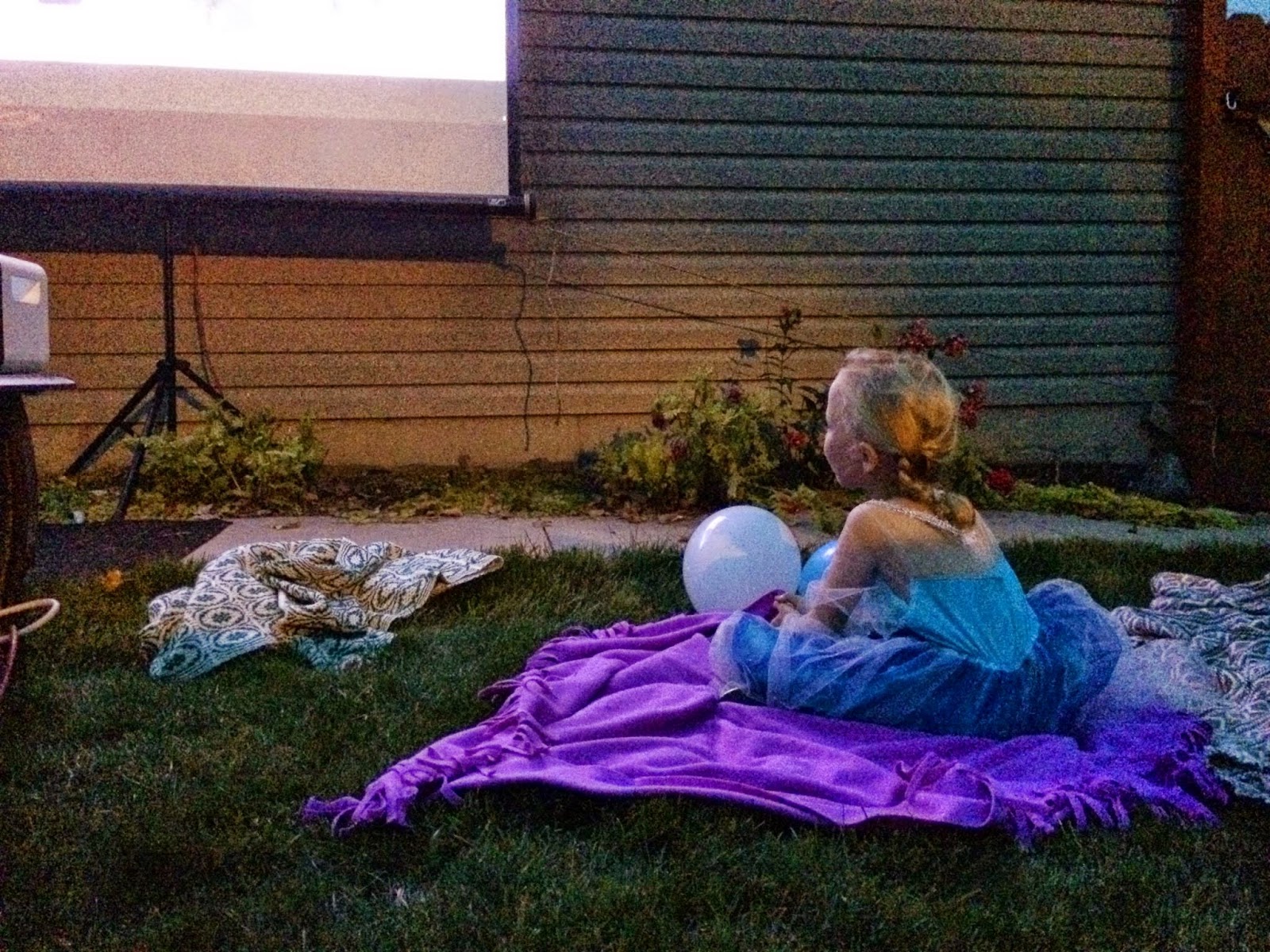 These were Apple-flavored shindigs, too, with a classic Apple iPod Hi-Fi boombox providing surprisingly rich and powerful sound, along with my MacBook Air to run “Frozen” during one of the showings (for the other, I harnessed a Microsoft Surface Pro tablet). 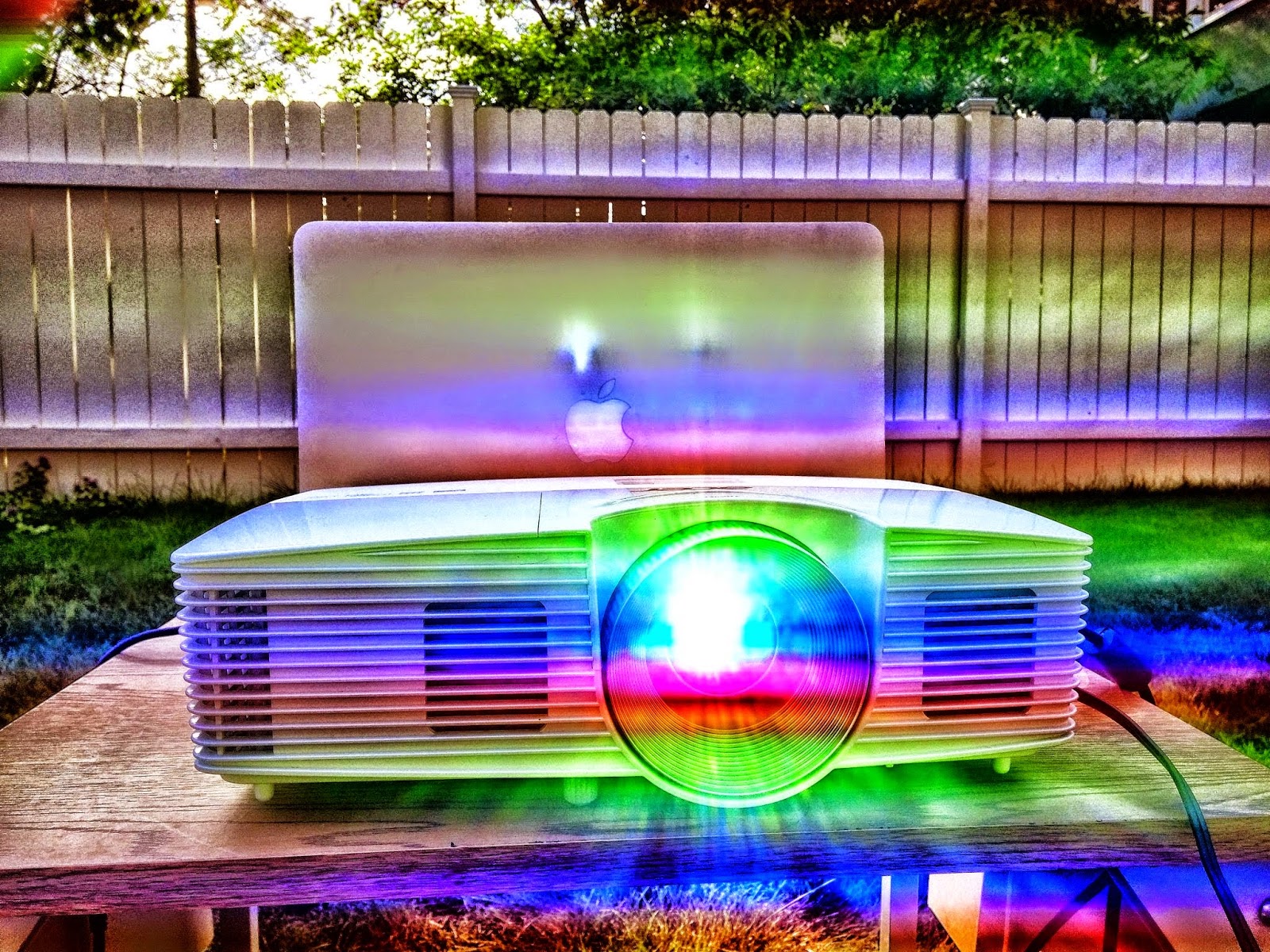 But figuring out the tech was not always easy. Here are my takeaways for anyone who might wish to take advantage of a warm summer night.

Pick Your Projector Wisely — For my movie-night experimentation, I borrowed a pair of projectors: Acer’s $549.99 H5380BD DLP Projector and Epson’s $799 PowerLite Home Cinema 750HD. They connect to my computers via an HDMI-to-DisplayPort adapter. 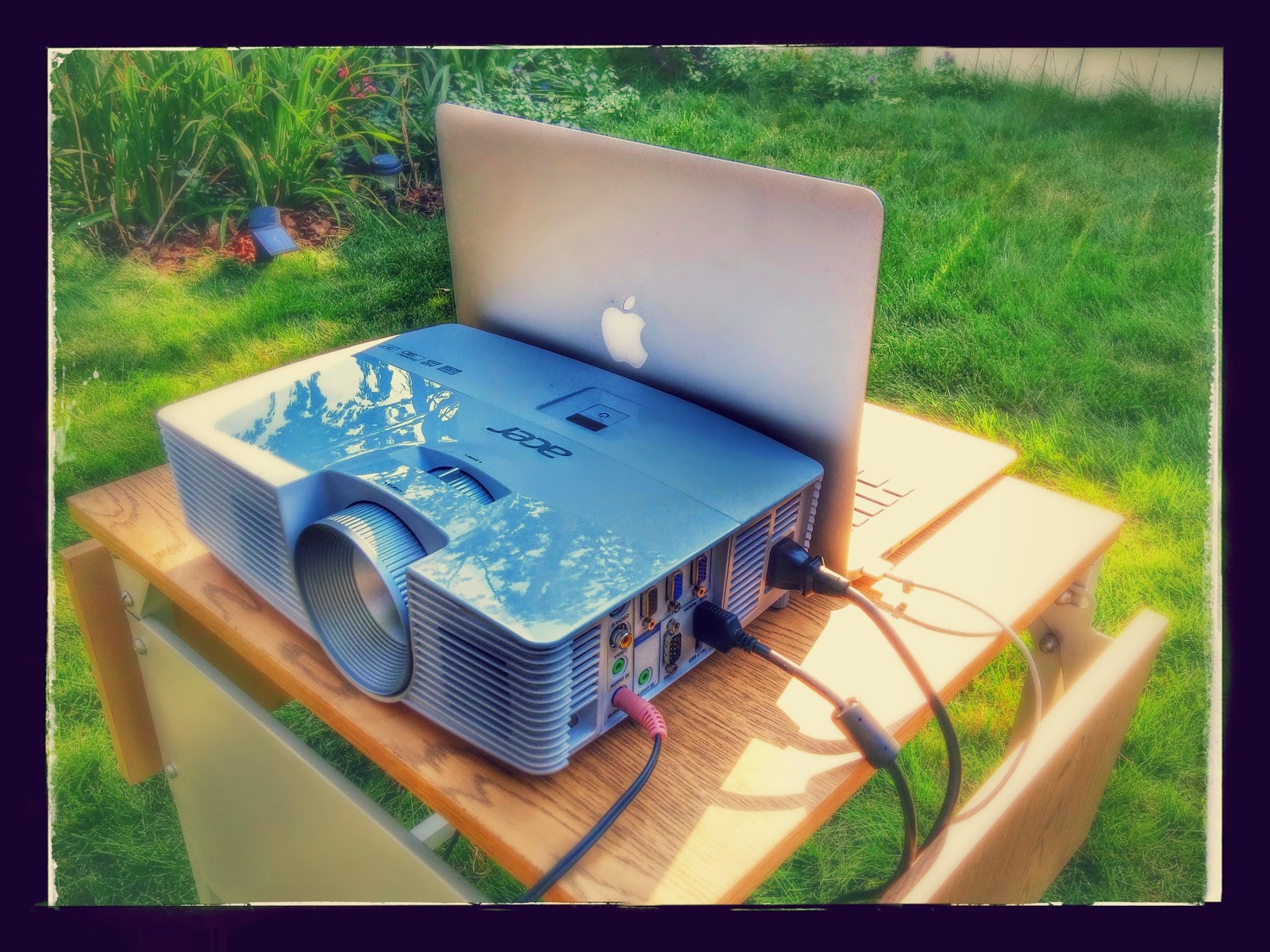 Both turned out to be pleasant surprises. Neither suffered from the dreaded dimness that plagued mainstream projectors years ago. Even at dusk, with a streetlight adding to the ambient illumination, the projectors pumped out more than enough light to show three Pixar shorts prior to the main feature. 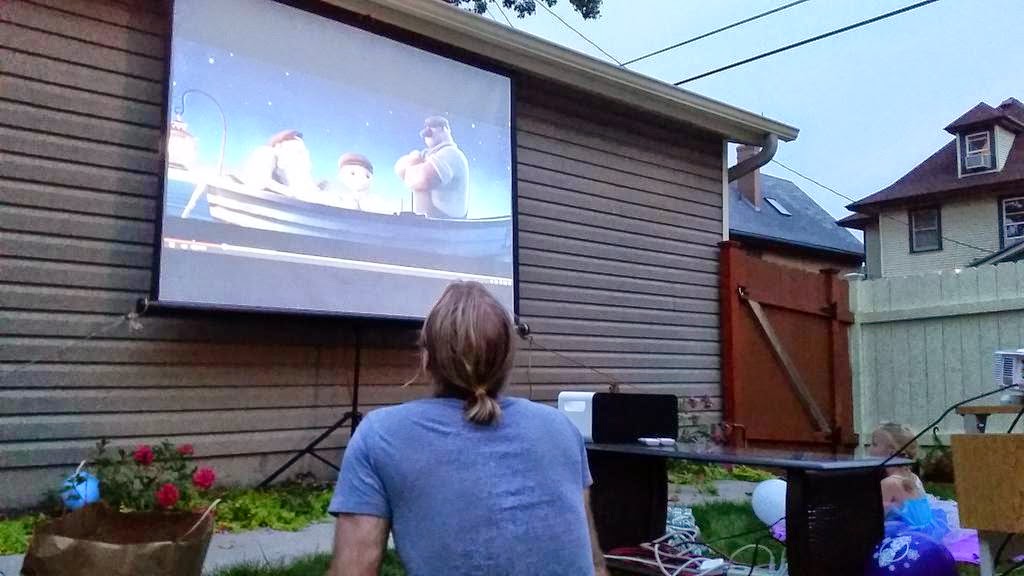 The Epson projector proved to be problematic because its audio output options don’t include an auxiliary port, which is what my iPod Hi-Fi required. Thankfully, the Acer projector has that port.

On the plus side, the Epson has duplicate sets of controls: one set on its remote and one on the main unit. In contrast, Acer users are dependent on the projector’s remote for many of the projector functions.

Don’t Overreach — My wife and I initially planned to build a screen using white fabric and plastic pipes which would have meant hours, if not days, of toil.

Then she stumbled on a Best Buy 113-inch collapsible screen with tripod-like legs for a reasonable $100. It’s smaller than our handmade screen would have been, in all likelihood, but it took only a few minutes to set up. It’s currently out of stock at Best Buy, but Amazon offers it for $109.

This is a modest setup compared to that of my friend and Apple troubleshooter Mark Fawcett of St. Paul, who told me he once used an old highway billboard as the display centerpiece for his tricked-out movie night, an event attended by neighbors for blocks around. I’m not that ambitious (well, not yet).

Allocate Plenty of Setup Time — Since I had never tackled anything remotely like this, I needed a ton of time — several evenings prior to each of the movie nights — to experiment and perfect my setup.

Just setting up the screen ate up a lot of time. It tended to flap and twist in the wind, so I anchored it to the ground from either side using twine pulled taut (if you need help with this, Knots 3D is a useful app that Josh Centers profiled in “FunBITS: Learn Knot Tying the iPhone Way,” 22 August 2014). Getting the projected imagery to be perfectly rectangular, and to fit precisely within the screen, was another ordeal. Fortunately, both projectors make compensating for angled “keystone” or “tombstone” distortion relatively straightforward.

I’m a raging neatnik with OCD overtones, so I wanted my setup arranged just so with the unsightly cords tucked out of sight, the projector aligned precisely with the iPod Hi-Fi, and so on. This took a while, but I felt oh-so-much-better for it, and I didn’t have to worry about my young moviegoers tripping over cables and potentially hurting themselves or the equipment.

Keep Your Stuff Organized — I was surprised at how many items I had to juggle – cables, adapters, chargers, and so on — and how easily things could go missing in the grass. I even managed to lose the remote for the Acer projector at one point.

It’s a good idea to use a duffle bag or cardboard box to keep all your materials consolidated — with cords wound and wrapped with twist ties or packing tape. I used a little messenger bag to organize my gear for the second showing, which was a big stress reducer.

Let It (The Internet) Go — My Surface Pro was about halfway through its “Frozen” showing when a “Sex with Emily” Gmail notification popped up on the lower-right corner of the screen… and stayed there for several minutes until I noticed it.

I’m not embarrassed about subscribing to an email newsletter from Emily Morse, the sex and relationship expert, but it’s not the kind of thing I want appearing on my projection screen during a kid movie night.

I publicly professed not to be mortified, per the tweet below, but, truthfully, I was, a little bit. On the bright side, I learned I have super-cool neighbors. 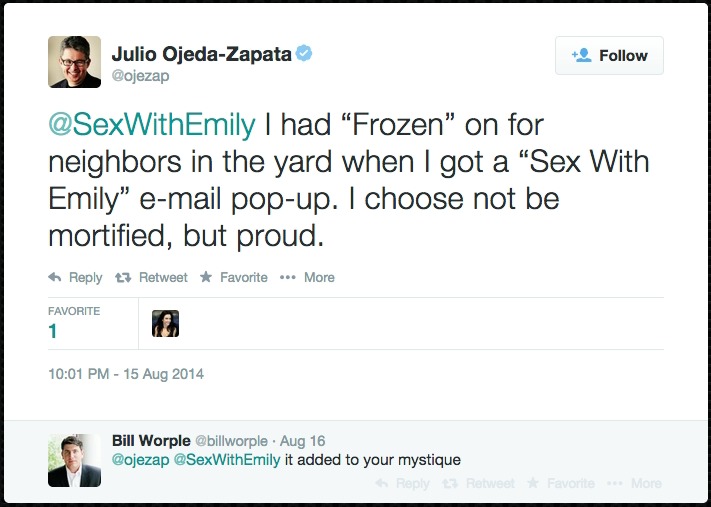 The moral of the story is that I should have switched the Surface tablet to airplane mode. On a MacBook Air or other laptop, it would have been wise to deactivate Wi-Fi. (An app like CoverDesk may have helped, as well.)

Don’t Stop! — The “Frozen” nights went so well that we decided we were not done for the year.

Giving the big kids their turn, we helped our 16-year-old son organize a screening of “The Matrix” and a bonfire to enjoy with friends (no adults allowed, except for his parents on A.V. and snack-server duty). 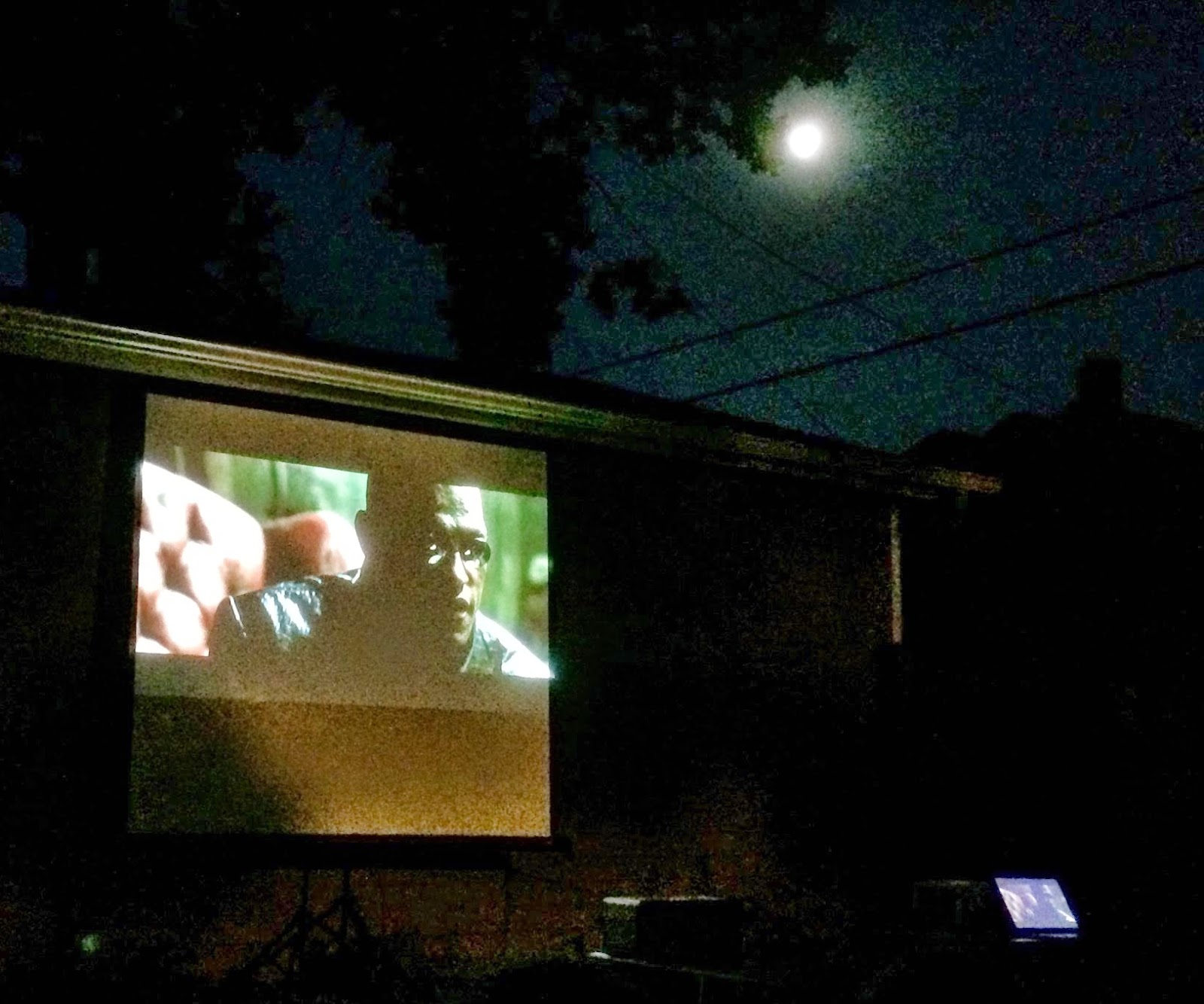 This event was also a smash success — except for the surprise return of Minnesota’s state bird, the mosquito, which had been mysteriously absent from the “Frozen” screenings. When we ran out of bug spray, my wife had to make an emergency Target run.

And in a few weeks, my friend and “Minimal Mac” blogger Patrick Rhone and I will be hosting a backyard “Phantom Edit” screening with a version of the vile “Star Wars: The Phantom Menace” that has been re-edited to be, I have been led to understand, actually enjoyable.

Thanks to these movie nights, this has shaped up to be one of my best summers ever.