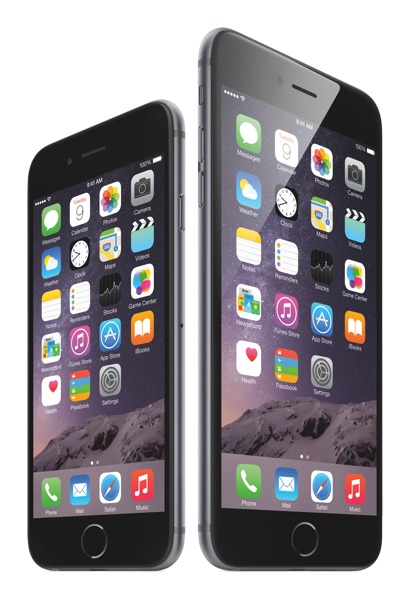 The displays aren’t just bigger, but better. Both are termed Retina HD, with the “smaller” iPhone displaying at 1334-by-750 resolution and the iPhone Plus displaying at 1920-by-1080. Both support the full sRGB color standard and feature higher contrast, more brightness, and better white balance. Apple promises deeper blacks and sharper text, with wider-angle viewing, and an improved polarizer for better performance outdoors. Despite rumors suggesting sapphire screens, the screen in both iPhone 6 models is still glass.

Our own Jeff Carlson, who was present at the event, pocketed both models (with the permission of the patient Apple demo staff) — and found that they fit into regular jeans pockets, with the iPhone 6 Plus obviously occupying more room. Ars Technica has posted a PDF template of the iPhone 6 Plus that you can print and cut out to see how it feels in your hand; perhaps tape it to some cardboard to get a sense of its pocketability. When Adam did that, he found that while the iPhone 6 Plus fit in his jeans pockets, it dug in uncomfortably when he sat down. Your mileage (and clothing) may vary.

Another tweak that will be almost shocking to long-time iPhone users is that the Sleep-Wake button, which has always been at the top of the device, has moved to the right edge, above the SIM slot. Apple’s reason is to better facilitate one-handed use of the larger cases. The Touch ID fingerprint-sensing Home Button is standard.

Alongside the A8 is Apple’s next-generation motion coprocessor, the M8, which features a barometer to sense air pressure to determine elevation (it might also be useful for weather apps). It can also estimate distances with improved sensors.

Also welcome are major improvements to the cameras. The iPhone 6’s 8 megapixel iSight camera has an f/2.2 aperture, along with a host of new features. Focus Pixels is a new technology that replicates the autofocus capabilities of high-end DSLRs for faster focusing. The camera also has faster and more accurate face detection, auto image stabilization to compensate for motion blur and shakiness, and higher-resolution panoramas of up to 43 megapixels. A unique feature of the iPhone 6 Plus camera is optical image stabilization, which moves the sensor to prevent motion blur in low-light situations.

Videos can be captured at up to 60 frames per second in 1080p resolution, and slow-motion video can be captured at 240 fps in 720p resolution (as well as at 120 fps, which was introduced in the iPhone 5s). Video capture now features continuous autofocus to stay sharp on the subject, and cinematic video stabilization to keep video steady.

But at heart, the iPhone is still a phone, and the iPhone 6 features more connectivity options than ever. It supports up to 20 LTE bands, the most of any smartphone on the market, and can download data at up to 150 Mbps over LTE. Apple will also offer voice over LTE (VoLTE) where available, which should offer increased voice clarity. It also features 802.11ac to take advantage of Apple’s latest AirPort routers, with up to three times more throughput than the 802.11n standard used in the iPhone 5s.

A curious feature of the iPhone 6 Plus is Reachability, which enables one-handed operation (and is similar to a Samsung feature that many Apple pundits mocked). Double-touch the Home button and the screen shifts down, making it more accessible to your thumb. The iPhone 6 Plus also features a special landscape view, which works similarly to landscape view functions on the iPad. For example, in Messages, landscape mode displays your list of conversations on the left and your messages on the right, and the home screen rotates to account for the orientation. The iPhone 6, even with a larger screen than the iPhone 5s and iPhone 5c, does not gain the orientation additions.

One software display feature both iPhone models will enjoy is Display Zoom, which will increase the size of content to take advantage of the larger screen sizes. Instead of zooming the entire screen, as the existing accessibility feature does, Display Zoom increases the size of icons and buttons, and also provides larger target areas for tapping. That will be particularly welcome to those of us with aging eyes.

Speaking of display size, apps will have to be tweaked to take full advantage of the larger screen sizes of the iPhone 6 and iPhone 6 Plus. As with iPhone-only apps on the iPad, apps that aren’t adjusted for the larger screens will automatically be scaled up via what Apple called “desktop-class scaling.”

Finally, both iPhone 6 models will feature near-field communication (NFC) for the first time, which is a cornerstone of Apple’s new Apple Pay system. For more on that, and how it relies on the Touch ID sensor built into both iPhone 6 models, see “Apple Pay Aims to Disrupt Payment Industry,” 9 September 2014.

9to5Mac is reporting that the 64 GB and 128 GB models will come with iMovie, GarageBand, Keynote, Pages, Numbers, and iTunes U pre-installed; they’re available as free downloads for the 16 GB models. We hope they can be deleted, for those who don’t use them and want to recover the space.

Apple is offering a new set of cases in silicone and leather. The silicone cases will retail for $35 for the regular iPhone 6 and $39 for the iPhone 6 Plus and will come in black, blue, pink, green, white, and red (benefitting the Product(RED) charity). The leather cases will cost $45 and $49 and come in black, soft pink, olive brown, midnight blue, and red (again benefitting Product(RED)).

If you’re not interested in the new iPhone 6 or 6 Plus, you may appreciate lower pricing for the current models, which remain available. When you purchase with a two-year service contract, the iPhone 5s drops to $99 for 16 GB and $149 for 32 GB, and the iPhone 5c is available for free.

Although we won’t know for sure until we spend some quality time with the iPhone 6, it appears that Apple has once again released a worthwhile update. The iPhone 6 and 6 Plus aren’t revolutionary — that’s not Apple’s goal — but they offer enough new features to attract those who are in the market for a new iPhone, along with those for whom a larger screen is a must. People who are actively turned off by the larger size of these models can stick with the iPhone 5s and 5c for now; it remains to be seen if Apple will maintain a smaller model in future releases.