Apple CEO Tim Cook reached back in time following his introduction of the iPhone 6 and Apple Pay at the Flint Center last week with a traditional but long absent “There’s one more thing.” That “thing,” of course, was Apple’s long-awaited smartwatch, which Apple showed on slides using the “WATCH” logomark, though, luckily, the company uses the more text-friendly “Apple Watch” name on its Web site. 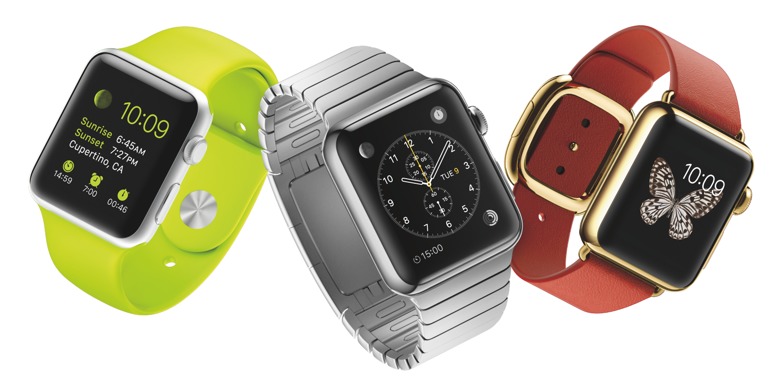 However, you’ll have to reach forward in time to get one: the Apple Watch won’t be available until early in 2015. And it’s not a single device, but a whole range of them, spread among three separate lines:

Each line consists of a number of different models, in two sizes — 38 mm and 42 mm — and with a variety of available bands, from durable colored plastic with a magnetic fastener, through various traditional buckle models, to Milanese loops. Between the various Apple Watch lines, there are dozens of different configurations being offered. Apple has never, in my recollection, offered so many varieties of a single product at launch. And, compared to other smartwatches currently on the market in terms of design, Apple’s latest offerings are, well, there isn’t any comparison: these are the first smartwatches I’ve seen that look absolutely like wristwatches. 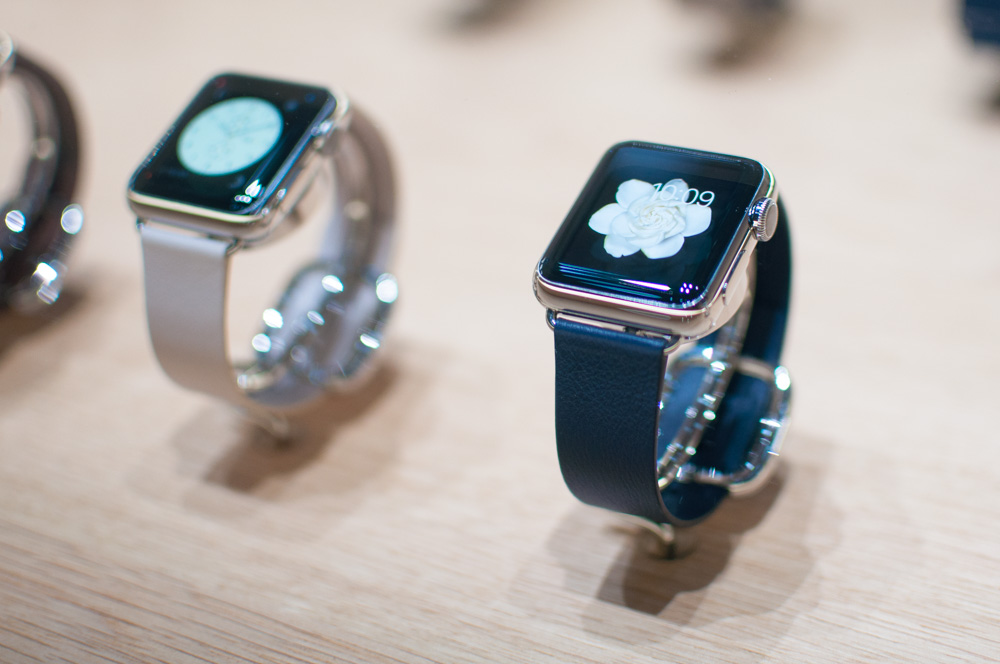 The Apple Watch, like many watches, is water-resistant but not waterproof. That is, you will be able to wear it in the rain or wash your hands with it on, but not wear it in the shower or swim with it. Athletes may be uncomfortable with that level of protection; there isn’t much difference between a downpour and a shower.

But that’s all on the surface. What does the Apple Watch actually do, and how does it do it?

As a watch, it offers over two million different ways to tell time, according to Apple. The Apple Watch will have a wide variety of software watch faces, many of them customizable with what watchmakers call “complications.” Apple Watch complications include stopwatches and stock reports, along with phases of the moon and upcoming meetings. The screen, of course, is touch-sensitive, but not just multi-touch. The Apple Watch screen also offers force sensitivity, so it can distinguish between a tap and hard press, which Apple calls a “force touch.”

Methods for controlling the interface itself are almost a blend of the old-fashioned click-wheel on the original iPod and the touch-screen of the iPhone. Aside from the screen, the watch stem, known as the “digital crown,” is a primary means of control. Users click and twirl the crown to control many onscreen actions. A second button below the crown can be pressed to switch to a list of contacts who can be reached using the Apple Watch’s connection to the user’s iPhone.

That’s right: many of the Apple Watch’s features work in collaboration with a nearby iPhone, and in fact, an iPhone is required. Happily, any model from an iPhone 5 on up will do. In conjunction with the iPhone the Apple Watch can message contacts, play music, serve as a real-life Dick Tracy wrist-radio using its built-in speaker and microphone, handle mail, and more. Among that “more” is Siri, allowing for dictation as well as information retrieval, and various new personal messaging capabilities, including the ability to exchange sketches, animated emoji, and tap sequences (the Apple Watch includes haptic feedback, meaning you can feel those taps on your wrist). The
watch can also share your heartbeat in real time.

That last is courtesy of the various sensors built-in to the Apple Watch. These can measure heart rate, body movement (including when you stand and sit), and, in conjunction with an iPhone’s GPS, keep track of how far you’ve gone on your morning run or bike ride. All this information and more is handled via the watch’s Activity app and its Workout app, not to mention the apps that communicate with HealthKit, a new iOS 8 feature, on the iPhone. Although Apple claims to have designed the Apple Watch for everyone from couch potatoes to serious athletes, Adam tells me that many serious runners would be unlikely to want to carry an entire iPhone as well as wear a watch, and as a
lifelong competitive runner, he should know. 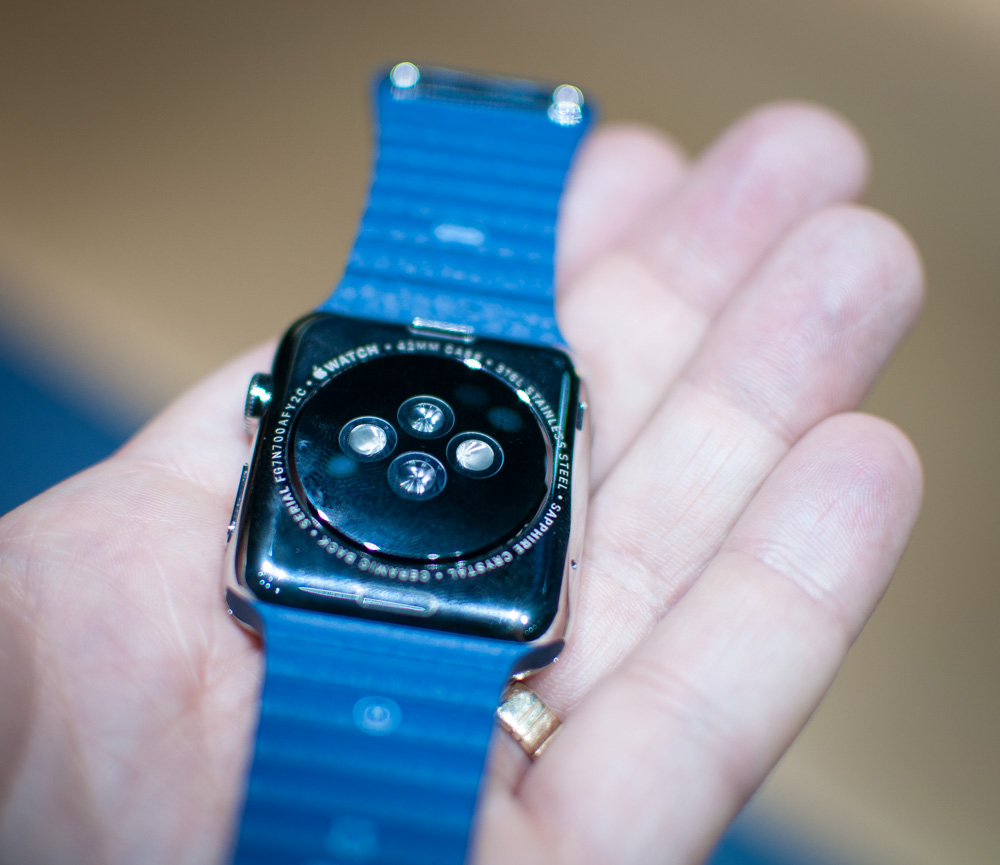 Also in conjunction with the iPhone, the Apple Watch can serve as a point-of-purchase device, using an NFC transceiver to make payments via a merchant’s reader. This is all enabled courtesy of the new Apple Pay service that was announced at the same event (see “Apple Pay Aims to Disrupt Payment Industry,” 9 September 2014).

Although most of what Apple demoed the Apple Watch doing involved Apple apps, there will be a WatchKit API that independent developers can use to create their own apps. They’ll presumably need to communicate with a host app on the iPhone, but Apple provided no details on that today.

Given all the things that the Apple Watch does, and its small size, one inevitably wonders what kind of battery life it offers. Apple isn’t saying anything beyond “an active day’s use” right now. The Apple Watch uses a magnetic induction device that snaps to the back of the watch and recharges it overnight — how long a charging cycle takes is another question that Apple has yet to answer. We anticipate that it will be the sort of thing you’ll need to plug in before bed every night.

Those in the “shut up and take my money” crowd (I may find myself marching with them) will need to save up at least $349 for the cheapest Apple Watch. How much the highest end watch, or, indeed, any other than the cheapest watch, will cost is another of those pesky unanswered questions at this time.

Last year, Josh Centers speculated on what kind of watch Apple would deliver (see “Making the Case for an iWatch,” 3 July 2013). It looks like he scored rather well. Among the items floating in his “claim chowder” offering were:

But will Apple Watch sales be tasty for Apple? Even at $349, I expect Apple to sell carloads of these timepieces from the future. What’s more, given that what was shown today was a preview of a 1.0 product, I expect the product lines to evolve quickly, and the price range to expand both lower and higher.

I believe we’ll see a lot of “IOU an Apple Watch” cards being left under the tree this holiday season.