My Twitter feed exploded last week with the news that numerous long-time Macworld editors, including Dan Frakes, Roman Loyola, Philip Michaels, Dan Miller, and Dan Moren have been laid off. (There is no truth to the rumor that Macworld parent IDG just had too many editors named “Dan” on the books.) In addition, Jason Snell has quit; he was a senior vice president and editorial director for IDG Consumer. 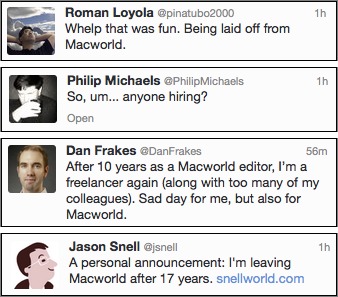 Specific details about what happened emerged quickly afterwards, with Macworld Editor Dan Miller confirming that the print edition of Macworld would be going away and the macworld.com Web site would continue with a reduced staff.

The timing was particularly grating, since a number of the Macworld staff had put in especially long hours the day before covering Apple’s announcement of the iPhone 6, Apple Pay, and the Apple Watch. Whether the timing was intentional or just part of a pay cycle, IDG should be ashamed.

IDG has made no official statement, either about the layoffs or the closing of the print edition of Macworld, and the company’s business-as-usual home page displayed a wonderfully awkward Twitter feed box showing tweets from the laid-off editors. New editor-in-chief of Macworld Jon Phillips wrote an article introducing the new Macworld staff: Susie Ochs, Chris Breen, Leah Yamshon, and Caitlin McGarry. He also noted that Macworld would be relying heavily on freelancers in the future.

We at TidBITS are tremendously sorry to hear about the layoffs. These people have been friends and colleagues for years, and although occasional turnover in the industry is inevitable, mass layoffs like this are deeply unsettling. Some of them have written for TidBITS and worked on Take Control in the past, and all have been mentioned in our pages. We hope to have the opportunity to work with them in the future.

Also sad is the demise of the print edition of Macworld. Since the launch of the Macintosh in 1984, Macworld has been a stalwart of the Mac community, a role that has continued through the 1997 merger with MacUser (see “MacUser and Macworld Merge,” 11 August 1997) and the disappearance of MacWEEK (“MacWEEK to Roll into MacCentral,” 5 March 2001). But with circulation reportedly dropping from 160,000 in 2013 to 135,000 this year, the writing for Macworld’s print edition was on the wall, despite Apple’s current dominance in the technology industry.