In keeping with tradition, Apple has announced that the latest iPhone models — the iPhone 6 and the large-screen iPhone 6 Plus — have set a new record for pre-orders, topping over four million in the first 24 hours. That’s twice as many pre-orders as Apple took for the last major revision, the iPhone 5, which chalked up two million pre-orders in its first 24 hours. (Apple didn’t report 24 hour sales for the iPhone 5s and iPhone 5c last year, but in the chart below we’ve estimated them at three million based on those models’ nine million sales in the first three
days.) 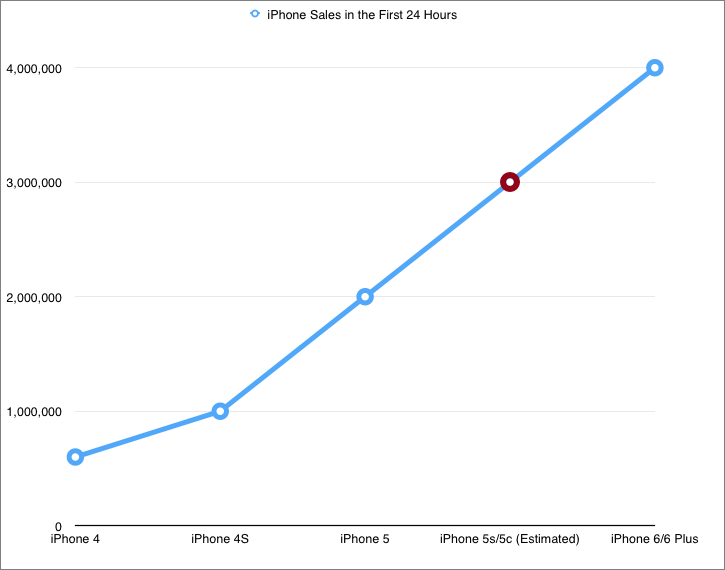 Apple and the major cell phone carriers appear to have sold out of their allotments of the iPhone 6 Plus, with all of them quoting longer ship dates for the larger model. Apple currently says that the iPhone 6 Plus is available to ship in 3–4 weeks, while pre-orders for the iPhone 6 will be fulfilled in 7–10 days.

Neither Apple nor any of the carriers have broken out sales numbers by model, nor has there been any information about how many of the iPhone 6 Plus model Apple manufactured. It’s entirely possible that Apple anticipated the iPhone 6 selling much better and built many more of them for launch. Last year, Apple overestimated demand for the iPhone 5c — Tim Cook acknowledged in Apple’s January 2014 earnings call that the iPhone 5c represented a smaller mix of iPhone sales than expected.

Apple almost never releases breakdowns of sales by model, but independent estimates by J. M. Manness on Seeking Alpha suggest that the iPhone 5s probably outsold the iPhone 5c by a margin of 2.5 to 1 early on. Subsequently, the iPhone 5c seems to be on an upswing, posting significant growth in Apple’s June 2014 quarter.