Prominent among Apple’s WWDC announcements for iOS 8 and OS X 10.10 Yosemite was iCloud Drive, designed in part to bring iCloud’s previously document- and app-specific storage capabilities back into plain view in the Finder (“Apple Unveils iOS 8 and OS X Yosemite at WWDC,” 2 June 2014). With iCloud Drive, Apple is hearkening back to iDisk, a feature of iCloud predecessors MobileMe, .Mac, and iTools that provided online storage that looked and worked like a normal (though slow) drive in the Finder.

But there’s a problem. Actually, there are three problems. Apple hasn’t officially released Yosemite yet, iCloud Drive doesn’t work in 10.9 Mavericks, and upgrading your iCloud account to use iCloud Drive in iOS 8 is a one-way street — once you upgrade, you can’t go back to the old document- and app-specific approach that’s compatible with Mavericks. So when iOS 8 asks you to upgrade to iCloud Drive, tap Not Now.

If you were to enable iCloud Drive, and use it for storing documents, you wouldn’t be able to see those documents within apps on a Mac running Mavericks. Upgrading to iCloud Drive reportedly moves your data to different servers (and probably rearranges it to boot), so I’m guessing that Mavericks simply has no idea where to look for it.

Beyond the basic inability to access iCloud-stored documents on the Mac, this limitation also prevents you from working on iCloud-stored documents on both an iOS device and a Mac, although the iCloud Web site now has an app that lets you see and download files stored in iCloud Drive. So, if you’re a fan of switching fluidly back and forth between Pages on your iPad and on your iMac, you really want to postpone upgrading to iCloud Drive until Yosemite ships.

Less obvious is that numerous developers rely on iCloud behind the scenes to keep iOS and Mac versions of an app in sync. A number of developers are warning users not to turn on iCloud Drive because it will prevent their iOS apps from communicating with the Mac versions still running under Mavericks. The Day One journaling app is in this situation, and its developer, Bloom, has put together a simple flow chart to illustrate what you should do. Realmac Software has also issued a similar warning for users of its Clear to-do and reminders app. 1Password developer AgileBits is also alerting early adopters about this problem; luckily 1Password can easily sync its data via Dropbox or Wi-Fi instead of iCloud. 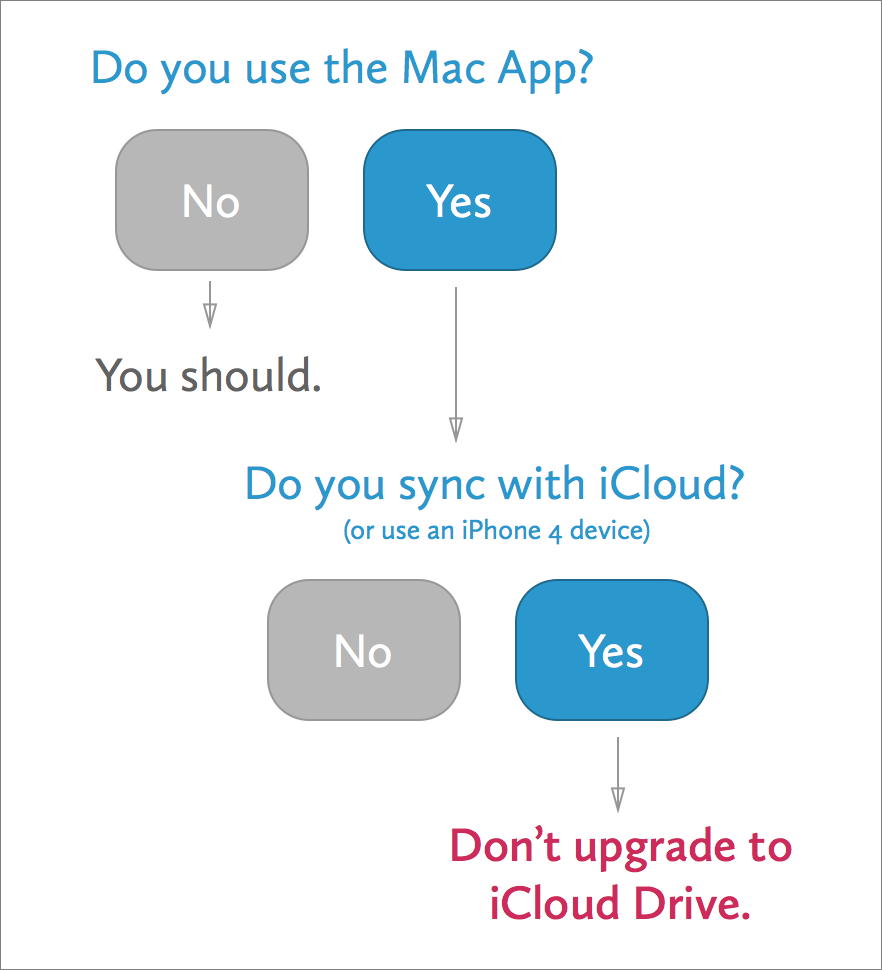 Confusing matters even further is that Pages, Keynote, and Numbers on the iCloud Web site now require iCloud Drive, and prompt you to upgrade when you open them. Unfortunately, this leaves you between the proverbial rock and hard place, since you can either use the iWork apps on the Web and in iOS 8 (with iCloud Drive enabled), or on the Mac and in iOS 8 (with iCloud Drive disabled), but there’s no way to work with the Mac and Web versions at all any more without downloading files to the Mac manually from the iCloud site. 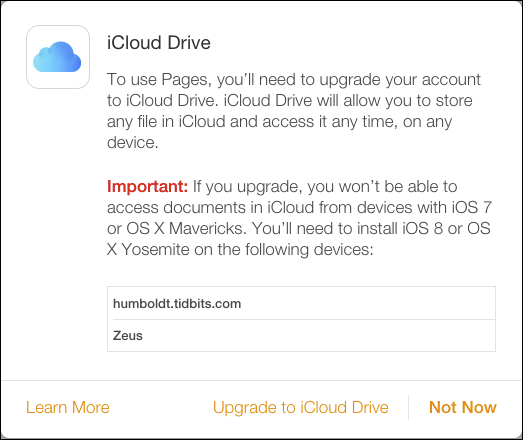 Of course, you could upgrade your Mac to the public beta of Yosemite, but since it is a beta, there’s no guarantee that everything will work as expected (if you do want to explore this option, be sure to read ““Take Control of Beta Testing Yosemite” Says It All,” 24 July 2014). Importantly, although developers have been using the beta versions of Yosemite to test their apps, they may not have released the necessary updates to enable iCloud Drive for their Mac
versions.

Comments About iOS 8 Users: Do Not Upgrade to iCloud Drive