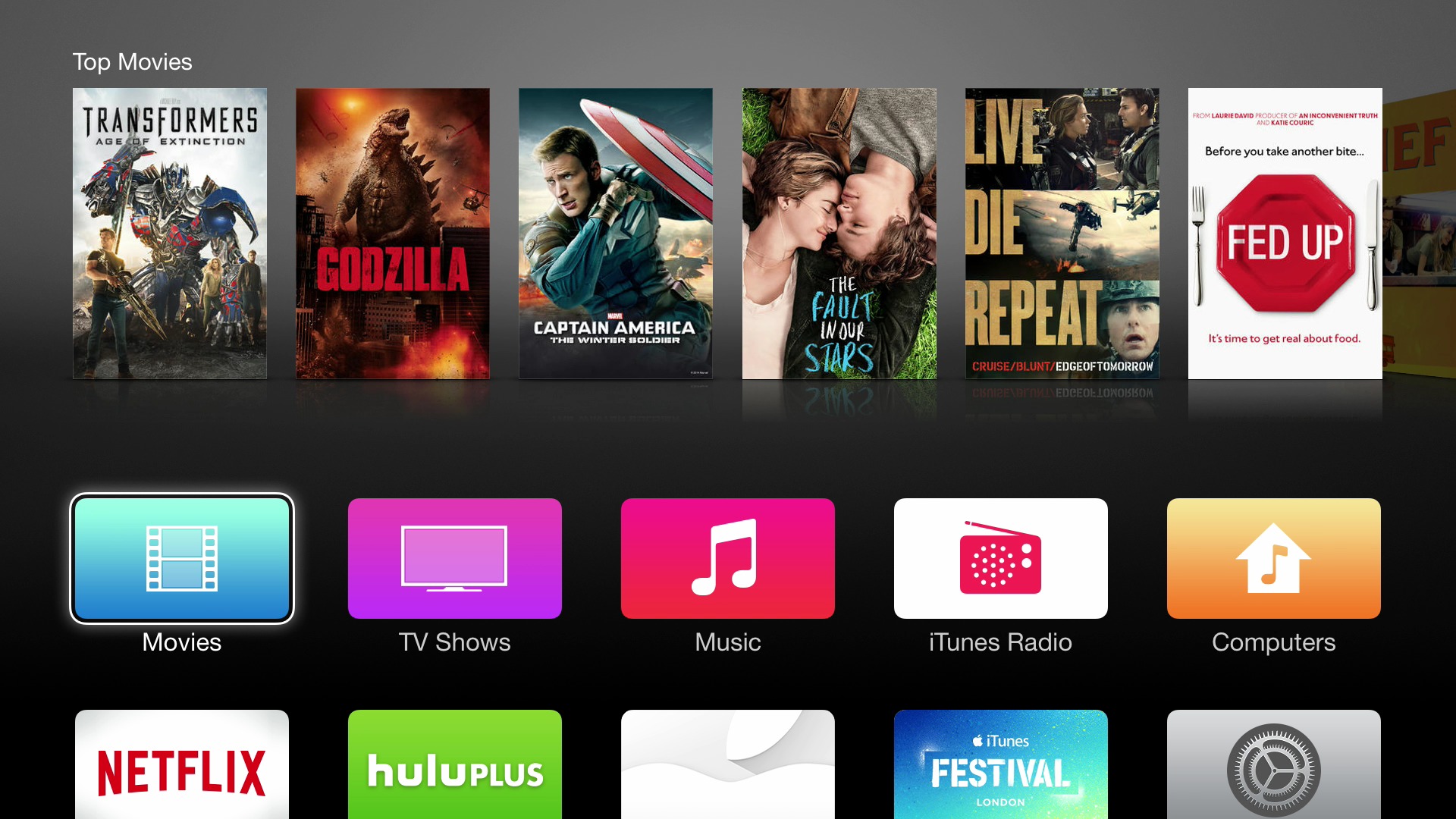 While I like the new look, it might take a bit of getting used to. I’ve noticed that the main menu is now incredibly bright, and you might have difficulty making out the new, thinner type from a distance. 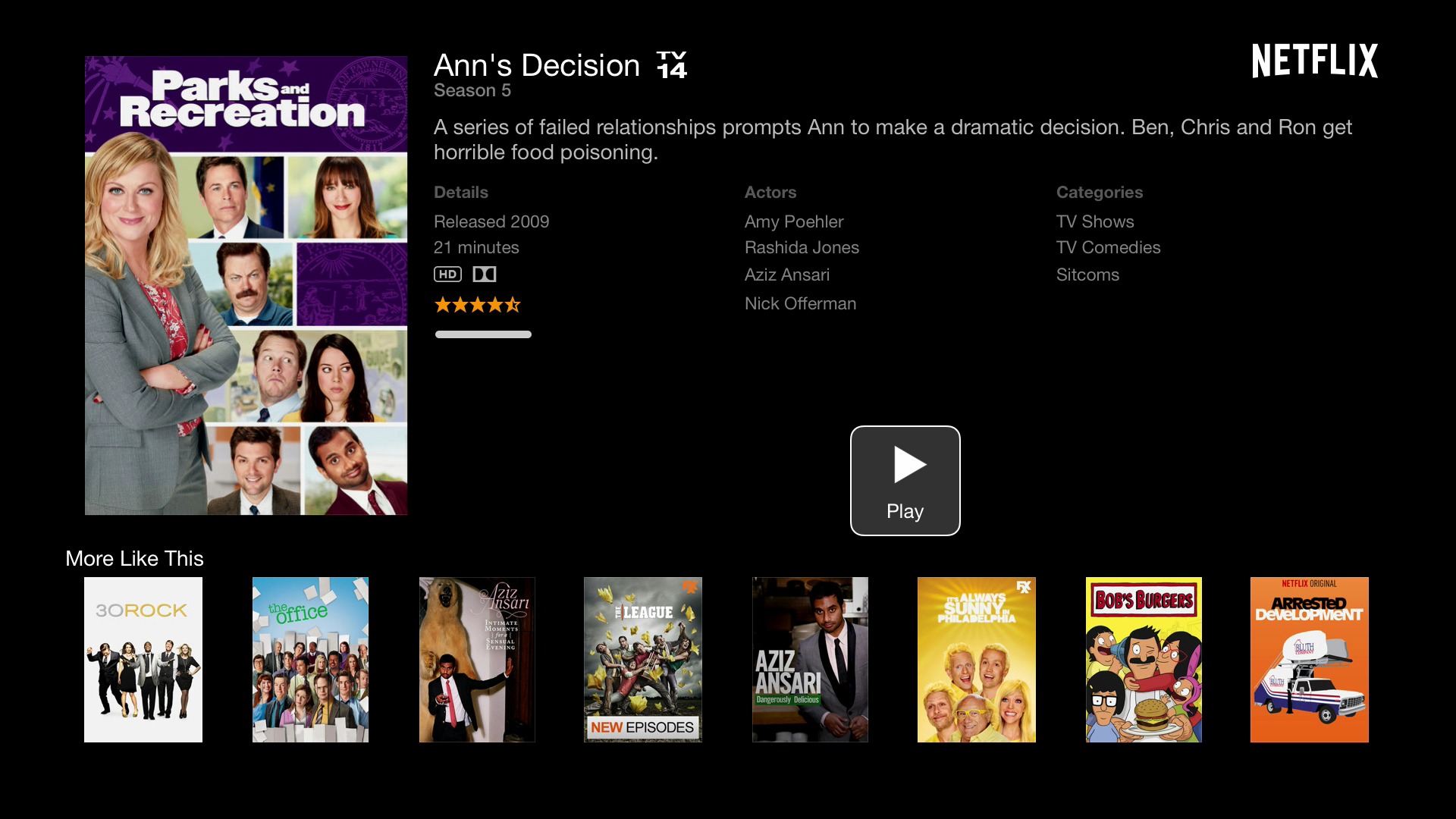 Functionally, everything works as it always has, so although the screens look a little different, my instructions in “Take Control of Apple TV” remain mostly the same (the largest change since publication was outlined in “Apple TV 6.1 and Remote 4.2 Bring Welcome Interface Improvements,” 10 March 2014, which details changes in how you hide apps).

However, there are a couple of behind-the-screen tweaks. Apple TV 7.0 can take advantage of the new Family Sharing and iCloud Photo Library features of iOS 8 (for an explanation of those features, see “10 Annoyances Solved by iOS 8 and OS X Yosemite,” 6 June 2014). If you’ve set up Family Sharing with other users, those purchases should show up in your Movies, Music, and TV Shows apps. If you’ve chosen to upload your photos to iCloud Photo Library in iOS 8, those should appear in the iCloud Photos app. (However, it’s still labeled as My Photo Stream.)

You will notice a not-unexpected addition to the Apple TV lineup: the Apple-owned Beats Music (for my take on Beats Music, see “FunBITS: What Sets Beats Music Apart,” 16 May 2014). If you’d like to check it out with a 14-day free trial, you can do so right from your Apple TV.

After you set up an account, Beats Music asks about music genres you like. Click once to set a genre as liked, twice to say you love a genre, or three times to mark it as a hated genre. 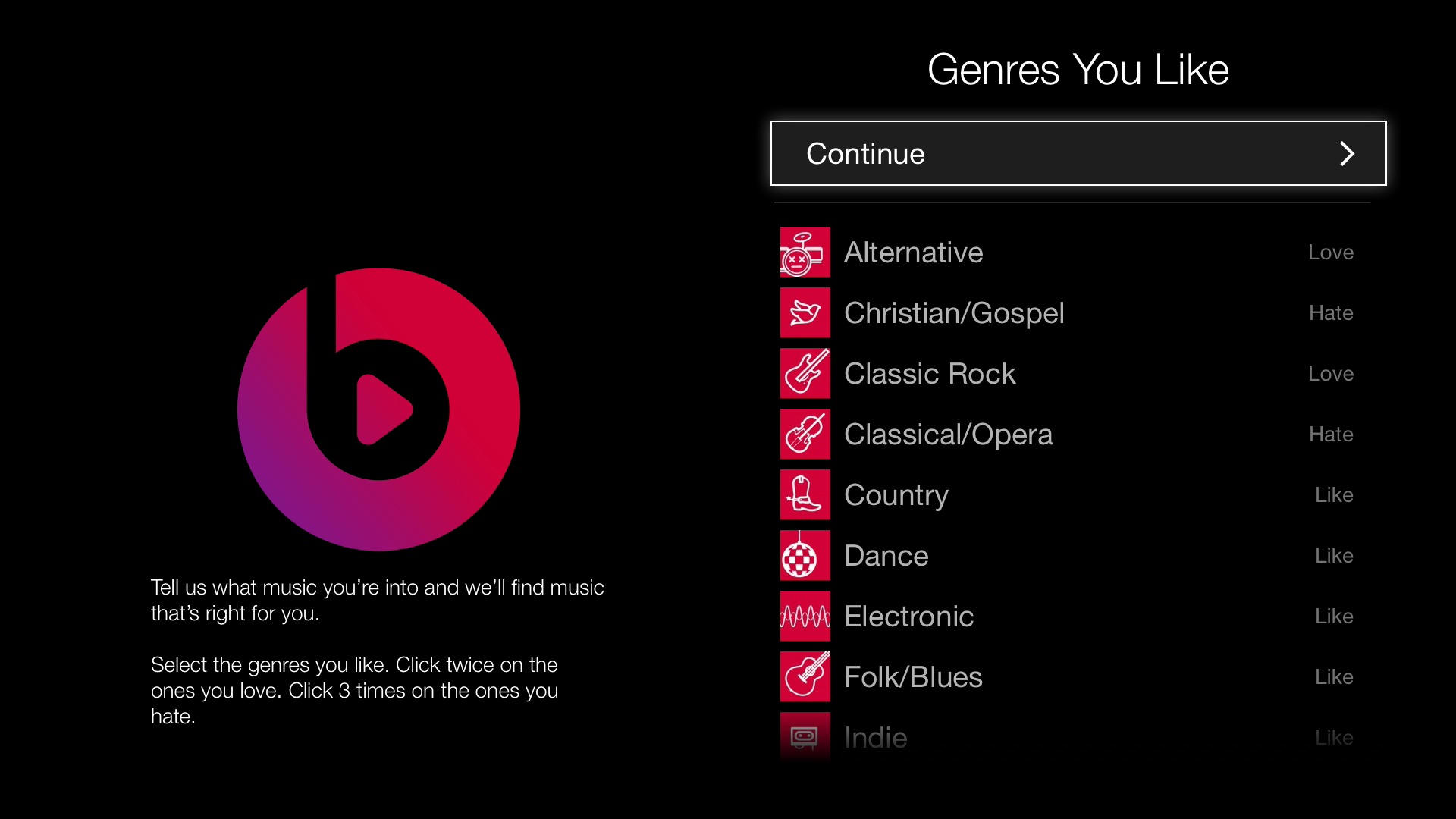 After that, Beats Music will prompt you to identify artists you like or love. 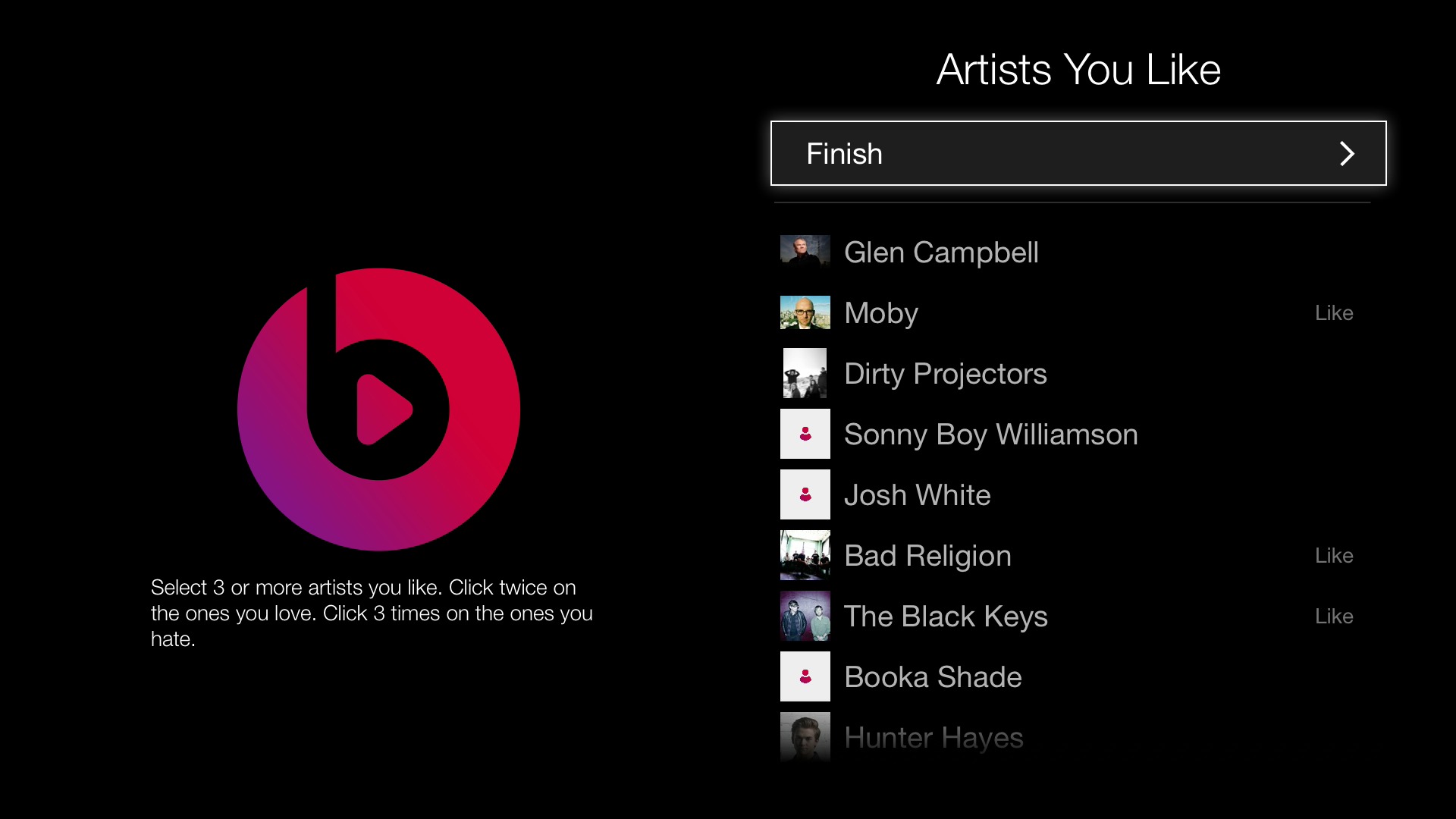 Once that’s done, you’re dropped into the main interface. There are five tabs available: 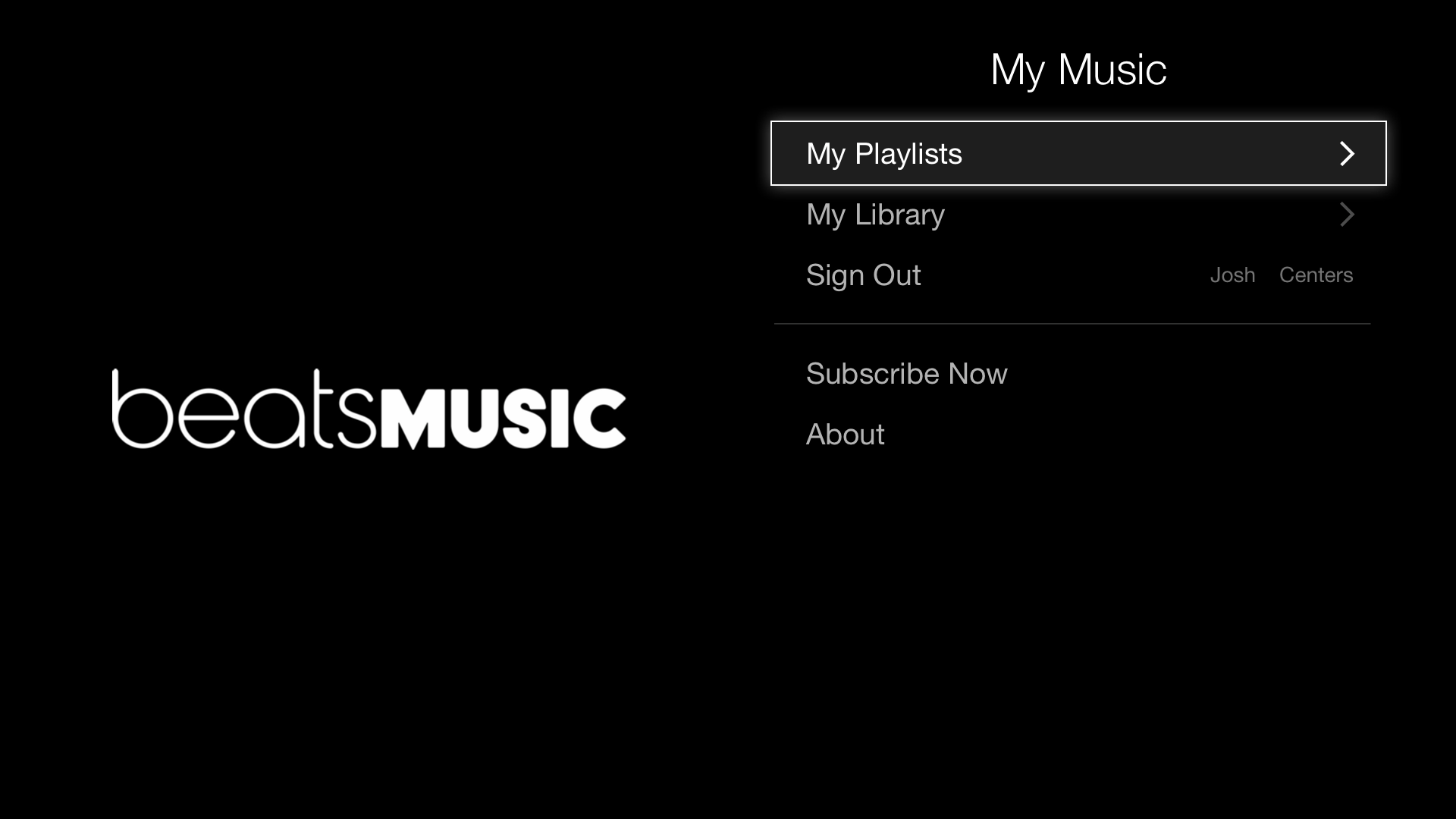 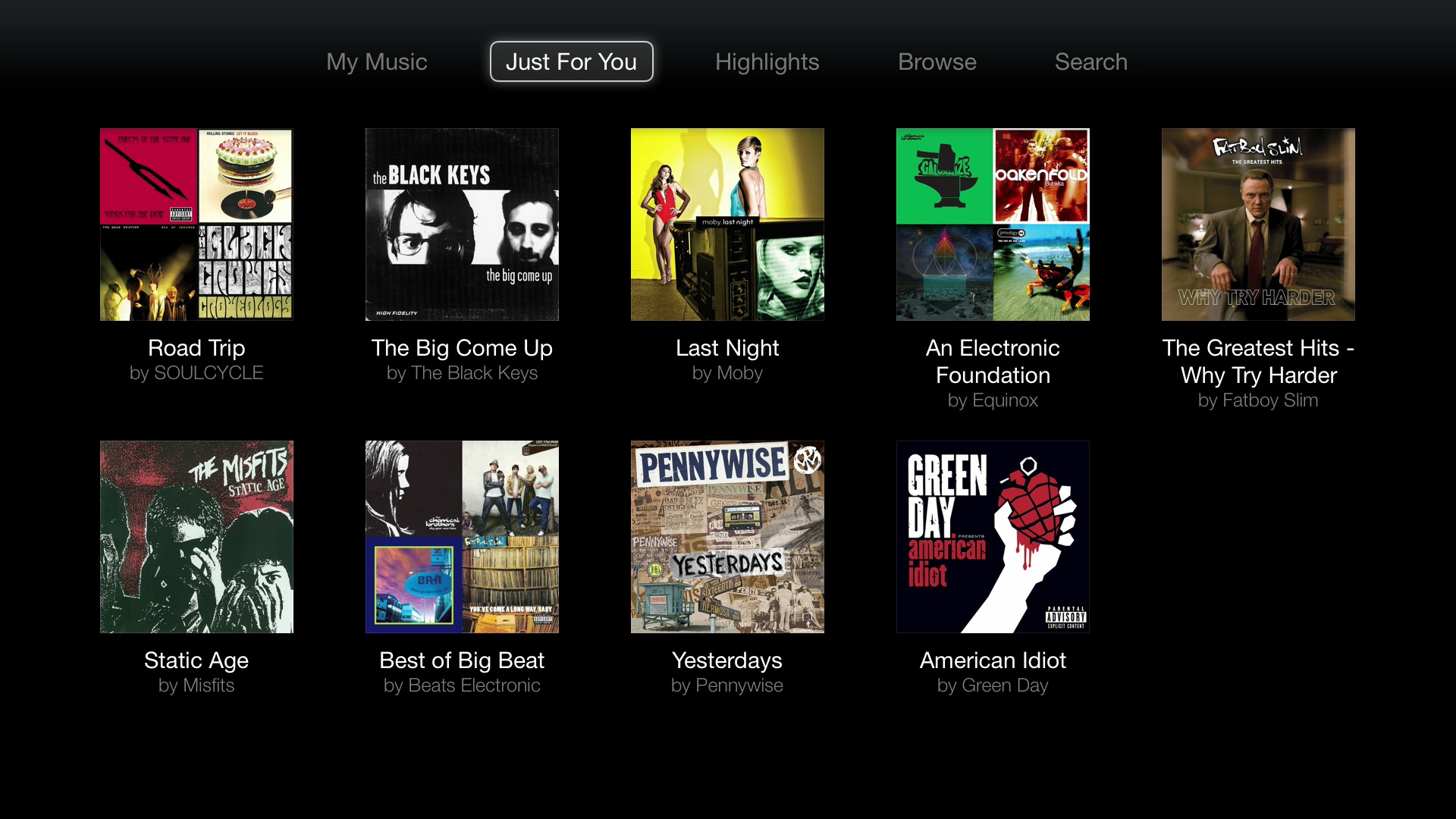 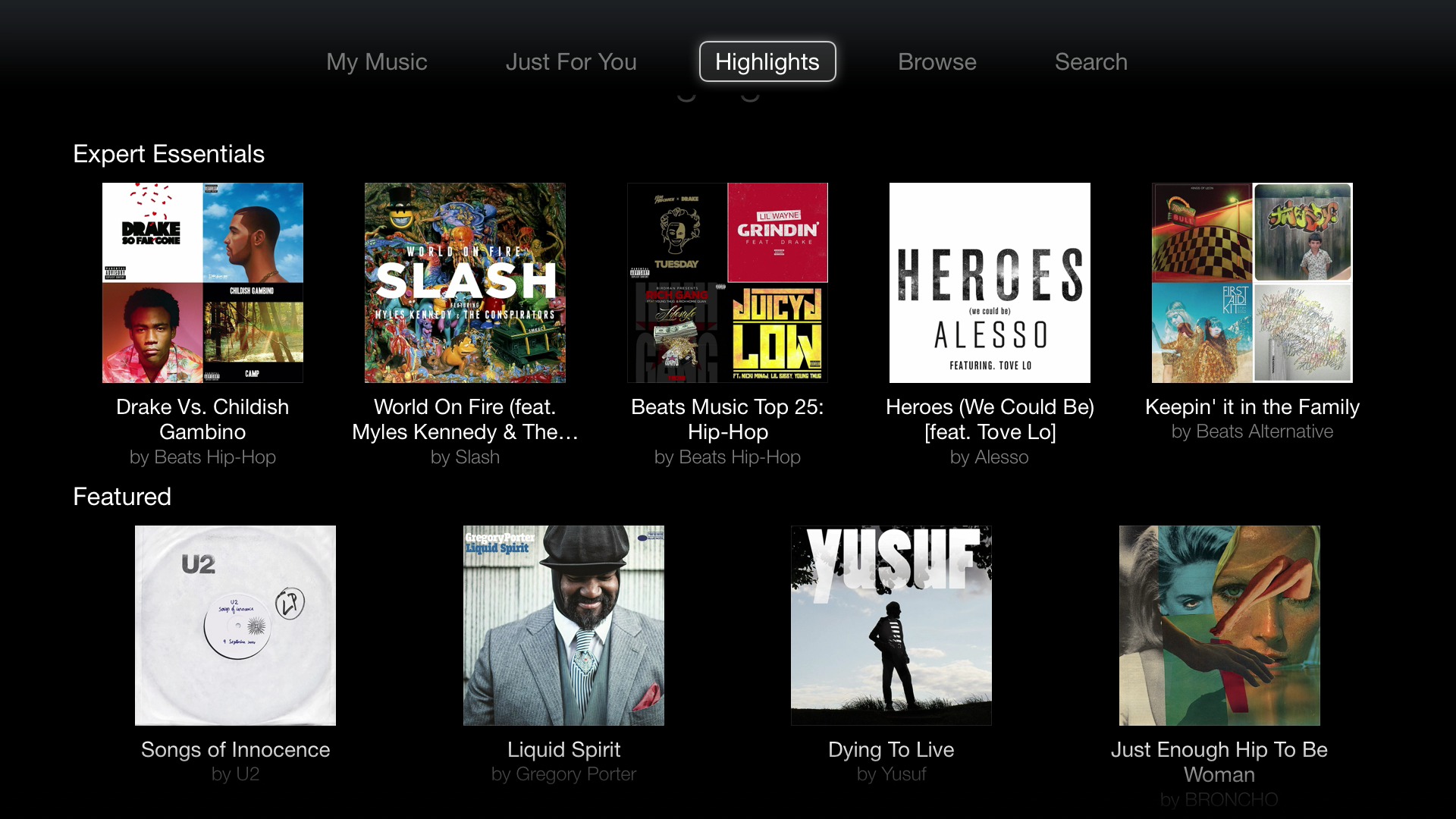 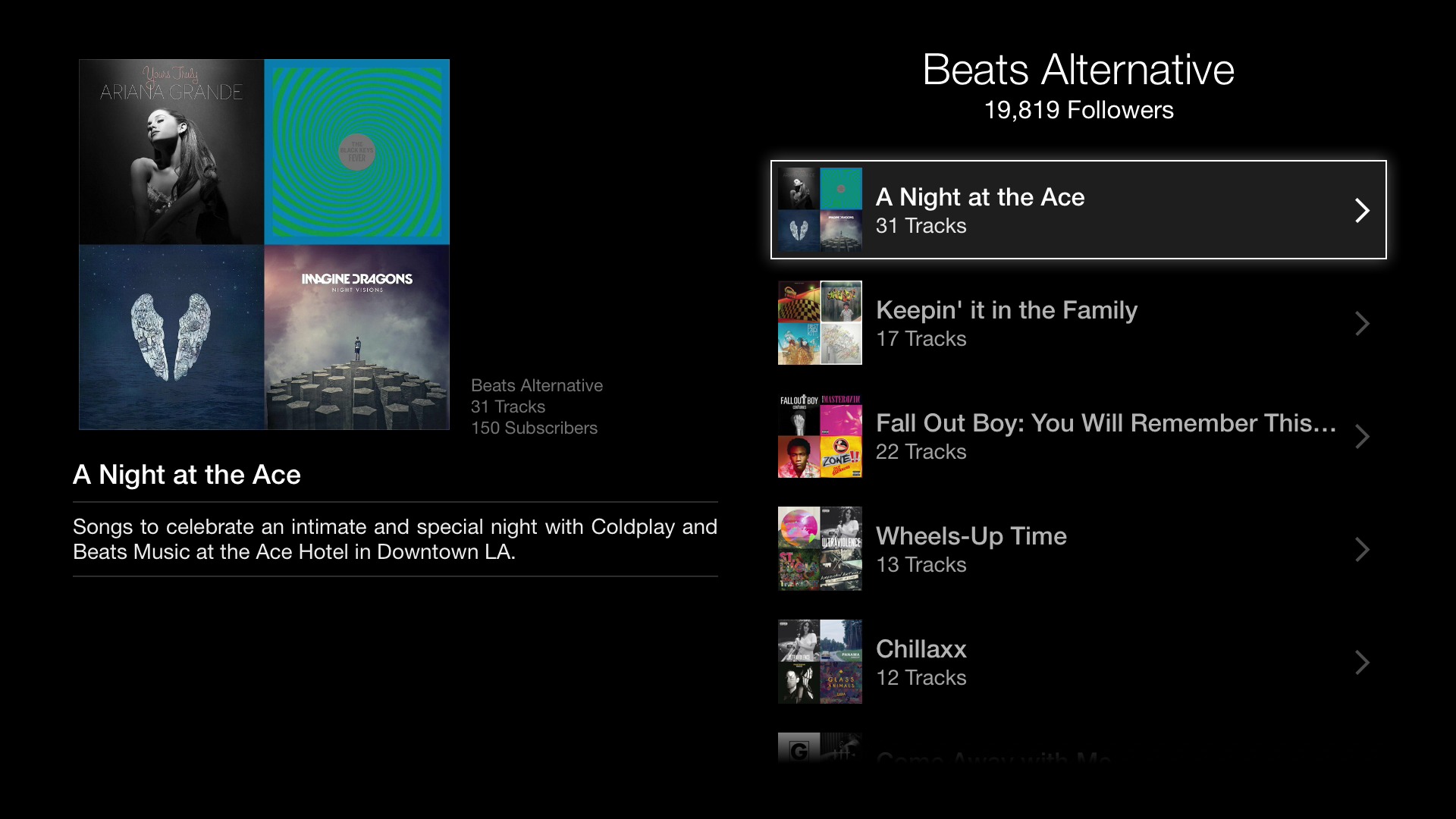 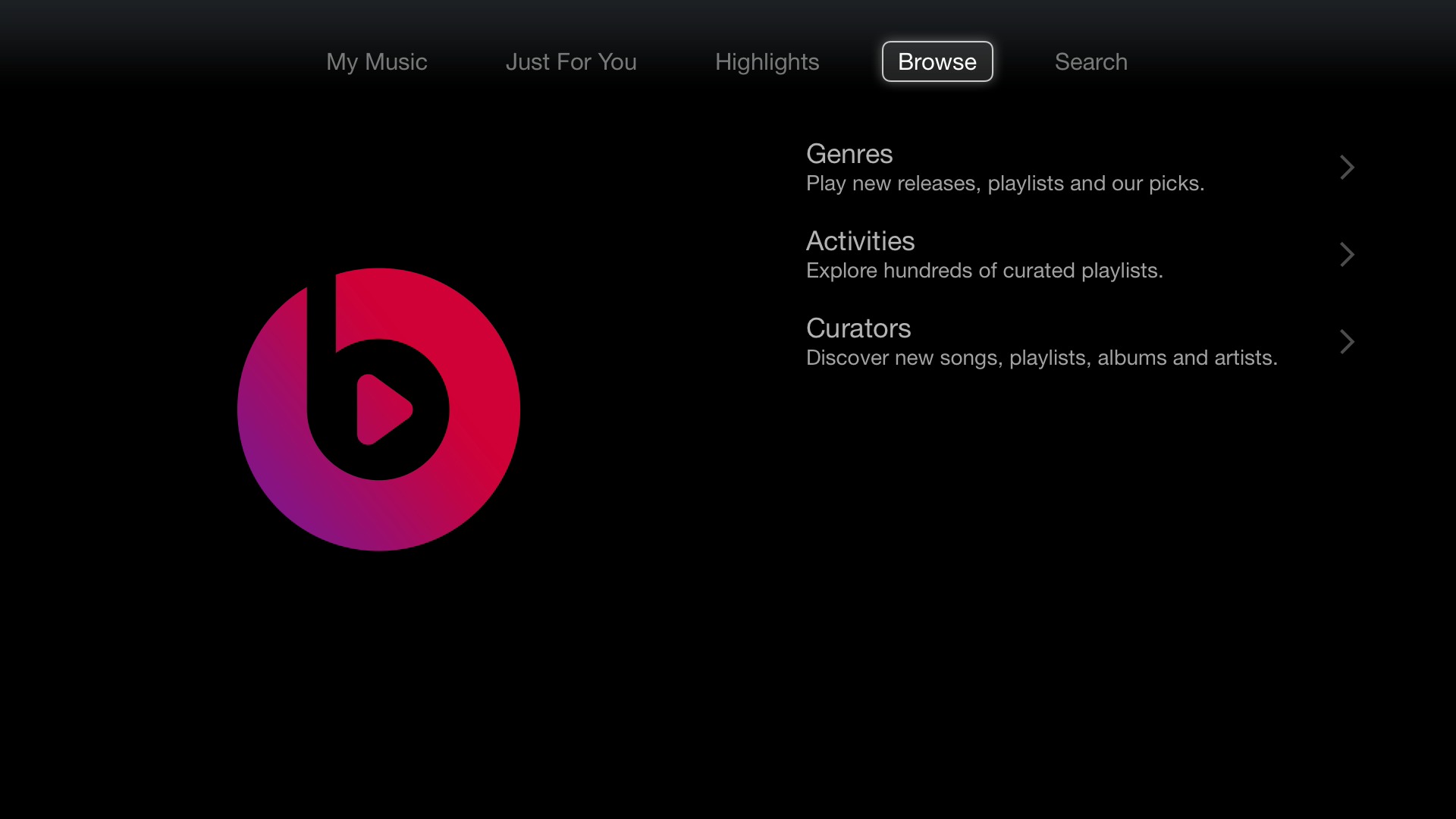 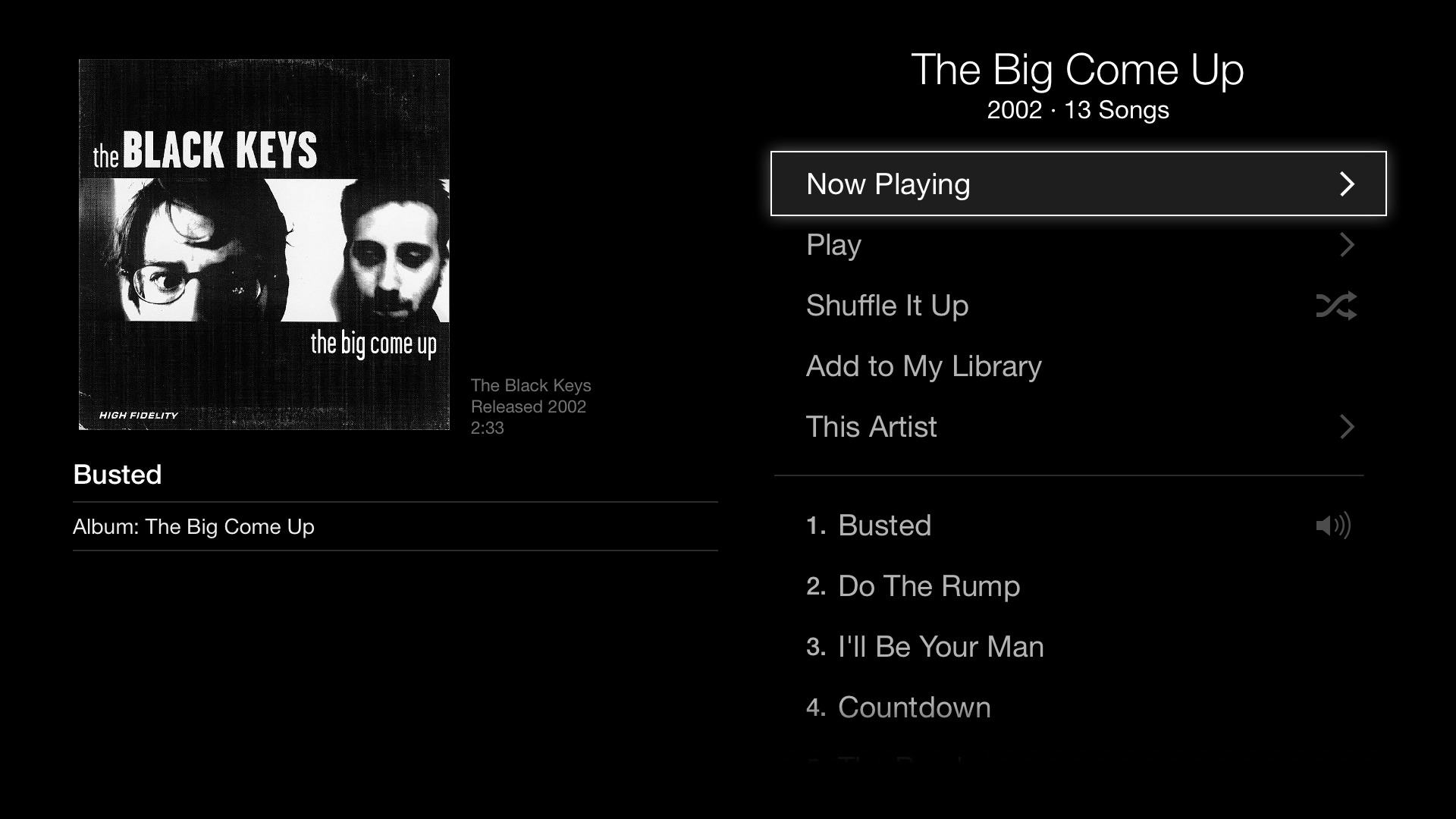 Curiously, the playback screen has no way to mark a song as a favorite, nor does the app provide access to a key feature of Beats Music: The Sentence, which is a unique way to generate playlists. 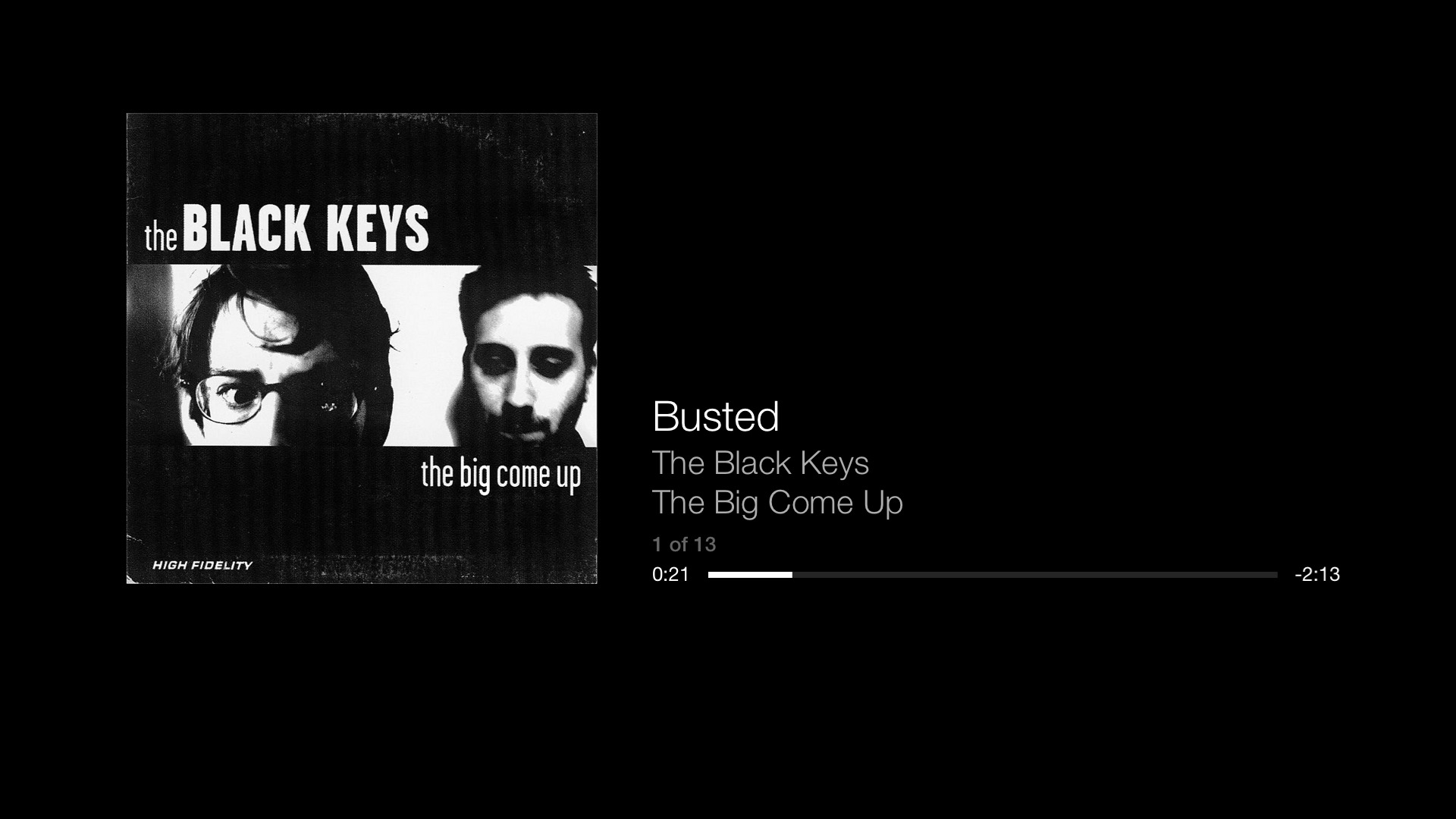 I suspect that the Beats Music team is far from done with the Apple TV app, but for now it’s nice to have it on board. Perhaps Apple will have an event next month with more exciting Apple TV news (Tim Cook has already hinted that you will be able to control the Apple TV with an Apple Watch, see “Apple Previews the New Apple Watch,” 9 September 2014).