Microsoft made waves when it bought independent developer Mojang for a staggering $2.5 billion (see “Microsoft Buys Minecraft Developer for $2.5 Billion,” 15 September 2014). Mojang’s claim to fame is a single game called Minecraft. You might be wondering why Microsoft dropped so much money on a such a tiny game studio.

Minecraft was released as an alpha on 28 June 2010. It wouldn’t see an official retail release until 18 November 2011, but even before then it was making waves. In the past few years, Minecraft has become a cultural phenomenon, spawning books, toys, and even its own convention. All from a tiny developer in Sweden, spawned from the mind of one man, who goes by “Notch.”

So just what is Minecraft? It’s a game unlike any you’ve ever played before. Imagine a randomly generated world larger than even the planet you’re standing on now, where you can build just about anything you can imagine: bridges, statues, castles, the Apple Campus, even a gigantic game of Pong.

Minecraft is available for several platforms, including iOS, but for this article, I’m going to talk about the Mac version. It costs $26.95 from Mojang, and while the listed system requirements apply only to the Windows version, there is a free demo mode you can try to see if your Mac can handle it. Most systems released in the past three years should be able to. You also need the current version of Java.

You start Minecraft by generating a new world. You can create as many worlds as your computer can store, and you can even input the “seed” used to generate the world (so you can share generated worlds with friends). There are two main game modes: creative and survival (hardcore mode is like survival, but the world is deleted if you die; the special adventure mode is available only in custom-made maps). For the sake of simplicity, I’m going to talk only about survival mode, but creative mode is identical, except you’re given access to all building materials from the start, you can fly, you destroy blocks instantly, and you cannot die. (Creative mode features heavily in the myriad educational uses of Minecraft — see the MinecraftEdu site.) 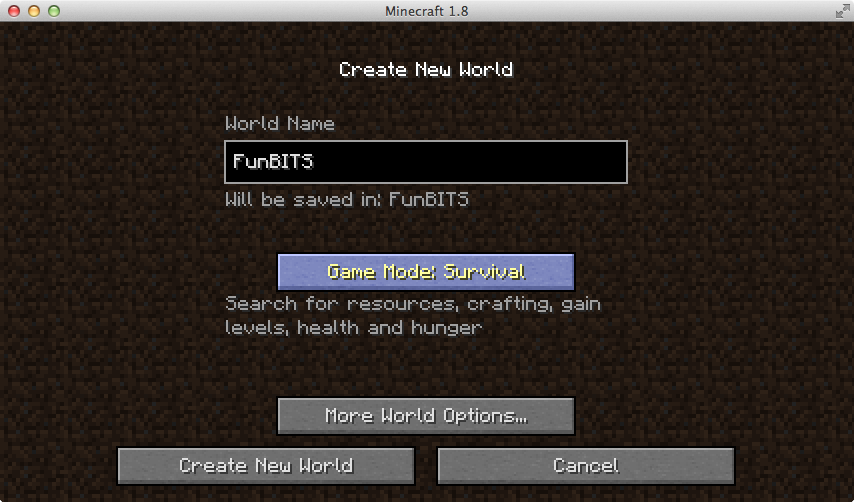 After the world is generated, you’re dropped into a vast world, made up of blocks. Almost everything in Minecraft is a block: blocks of dirt, blocks of wood, blocks of leaves, blocks of water, blocks of stone — you get the idea. 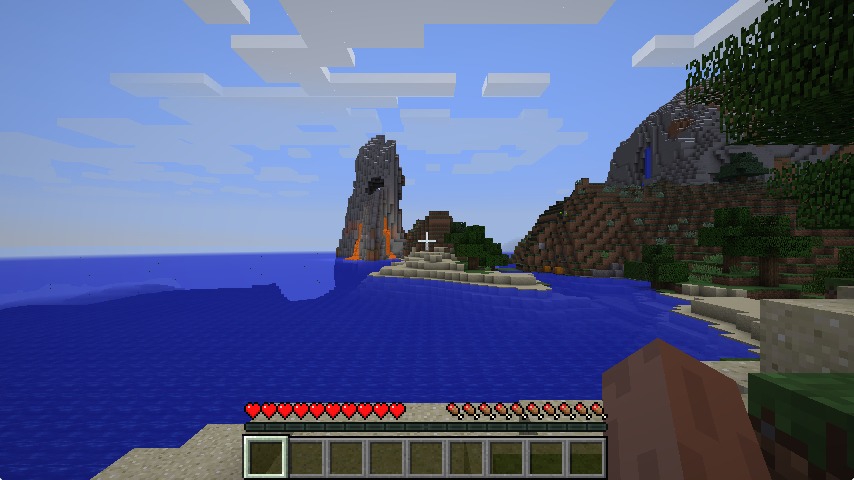 I could write an entire book about Minecraft (several, probably), but I’d like to give you a quick walkthrough of how to get going in survival mode.

Survival mode is just what it says on the tin. You’re dropped in the middle of this mysterious, blocky world, and like a computerized Les Stroud, you must figure out how to survive.

First, you need to build some tools, most importantly a pickaxe. To get the materials for these tools, you’re going to have to punch some trees.

Luckily, your character (nicknamed Steve) has an iron fist. Run up to a tree, hold down the left mouse button to punch it, and a block of wood eventually flies out. Repeat as necessary. Some blocks may fall to the ground, but you can walk over them to pick them up. 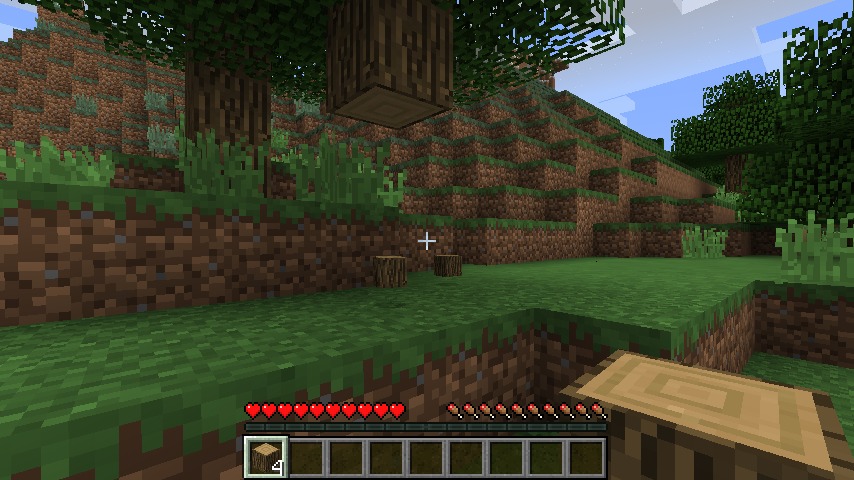 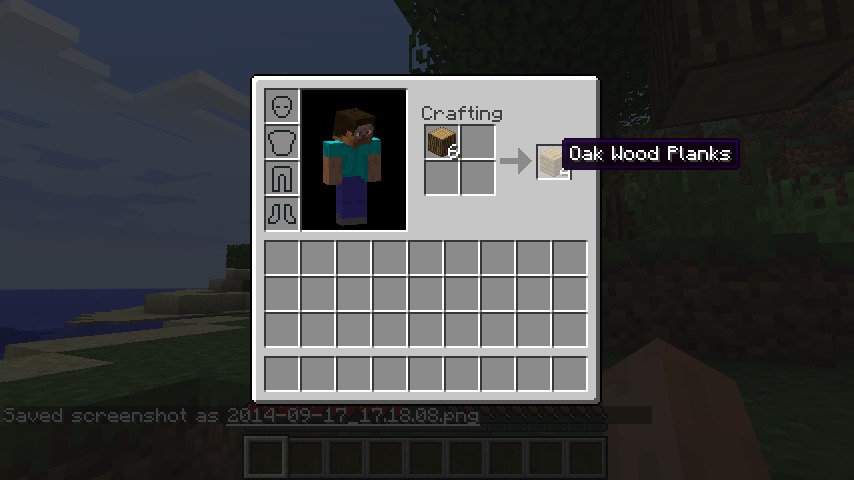 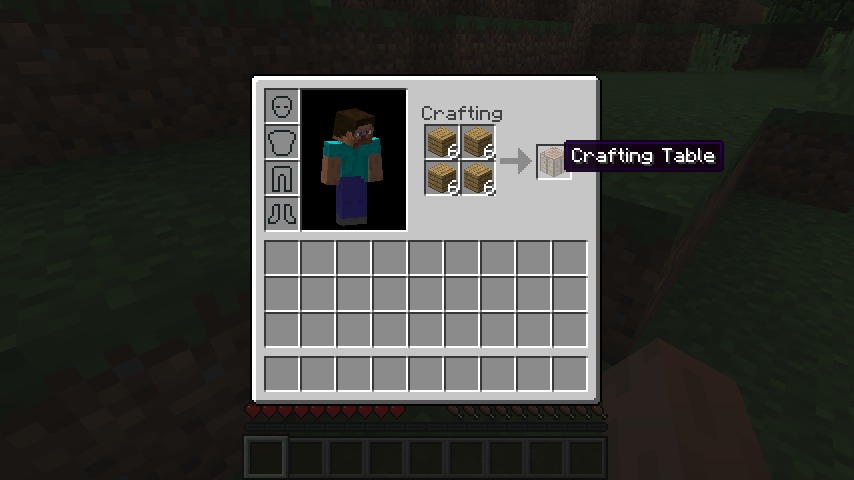 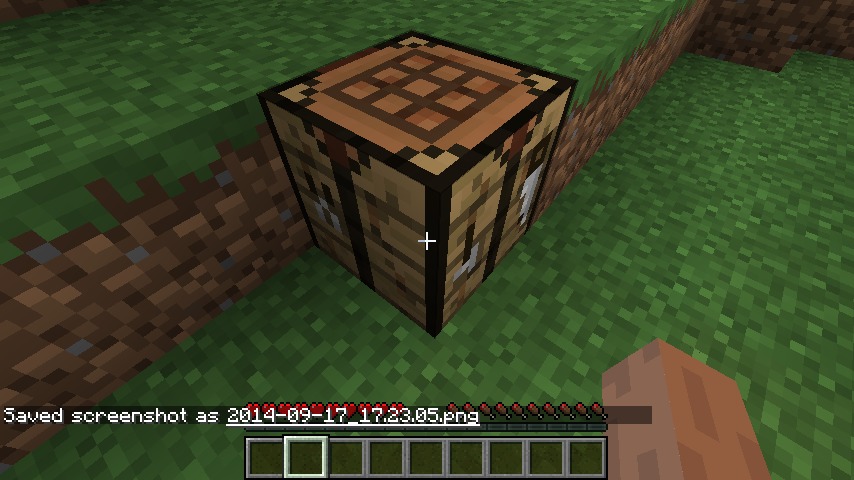 But a pickaxe without a handle is useless. So drop some planks into the crafting grid to create sticks. Drop the first plank anywhere, then put the second above or below it. All crafting in Minecraft works this way; to build an item, you must draw it out on the crafting table. 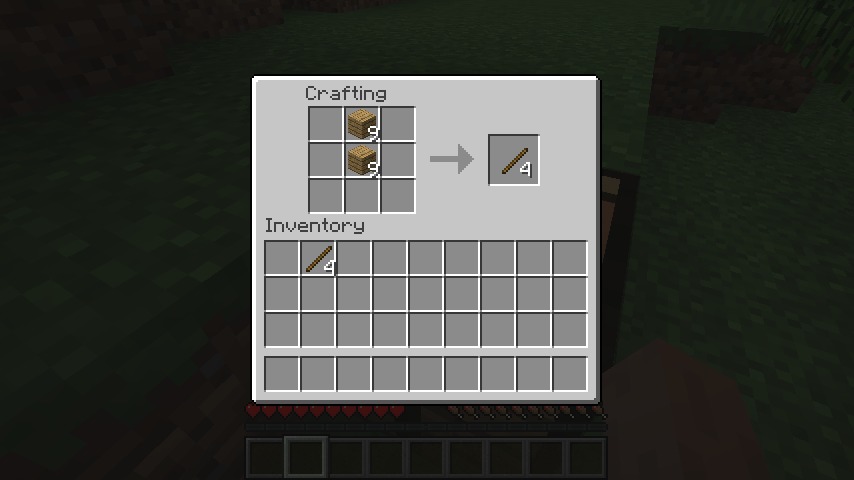 Once you have sticks, you must arrange the sticks and planks on the crafting grid to form a T, as I’ve done in the screenshot below. This will produce a wooden pickaxe. 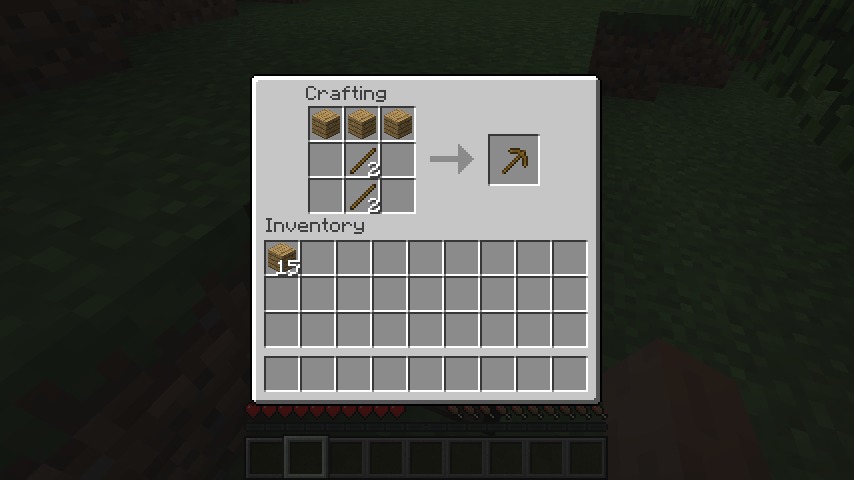 The pickaxe is essential, because you need it to break stone. There are other wooden tools you can build at this point, like a wooden shovel (which helps in digging) and a wooden axe (probably a good idea, since it makes chopping trees go faster), but right now I’m going to mine some stone, which can construct stronger tools. Stronger tools are essential, since they last longer and they enable you to mine precious blocks (like diamond) that weaker ones can’t. Your wooden pickaxe can later be remade in stone, iron,
gold, and the king of pickaxes, diamond, which can mine any material and lasts much longer (1562 uses as opposed to 251 for iron or 60 for our humble wooden pickaxe). But that will come much later, and is out of scope of what I can discuss here.

Now it’s time to find some stone, which shouldn’t be difficult. Look around hillsides for gray blocks. Equip your pickaxe and hammer away at that stone! 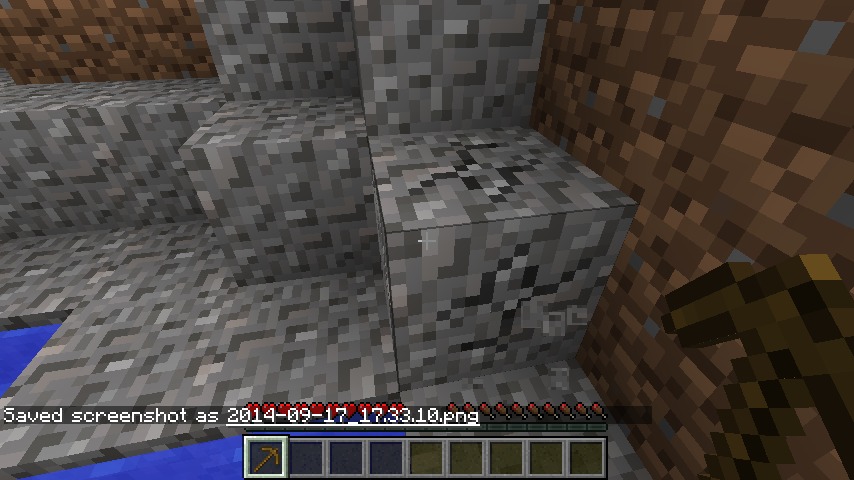 Our next survival priority is fire. I haven’t mentioned it yet, but the clock starts the second the game does. You begin in the morning, but when night falls, the monsters come out, including:

The fun part is, monsters can spawn in darkness of any kind, such as an unlit cave. So to prevent that, we need torches. And to build torches, we need coal or charcoal.

Coal can be identified in the world as a stone block with black blobs. Fortunately, if you cannot find any, you can make charcoal. 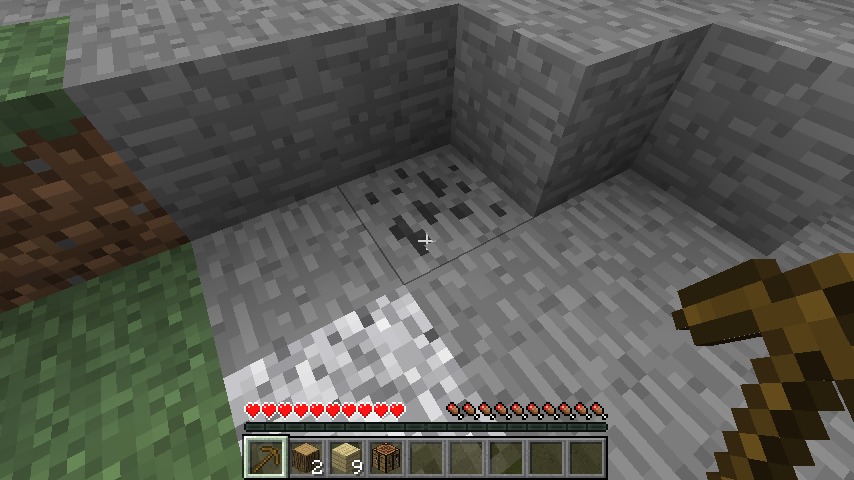 But to make charcoal, you need a furnace, which can be constructed on the crafting table with eight stone blocks arranged so the middle square is empty. Once the furnace is made, you place it on the ground and interact with it just like the crafting table. 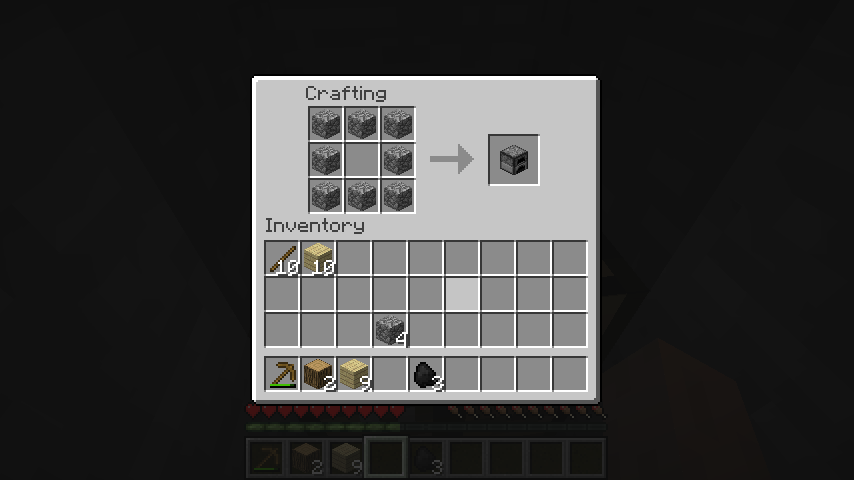 The furnace interface has three squares. The bottom square is for fuel, such as wood, the top for the material to be burned, and the right square is the output. To make charcoal you need to burn a block of wood (not a plank, but a fresh block from a tree). You can use either planks or wood blocks for fuel, but planks are more efficient. 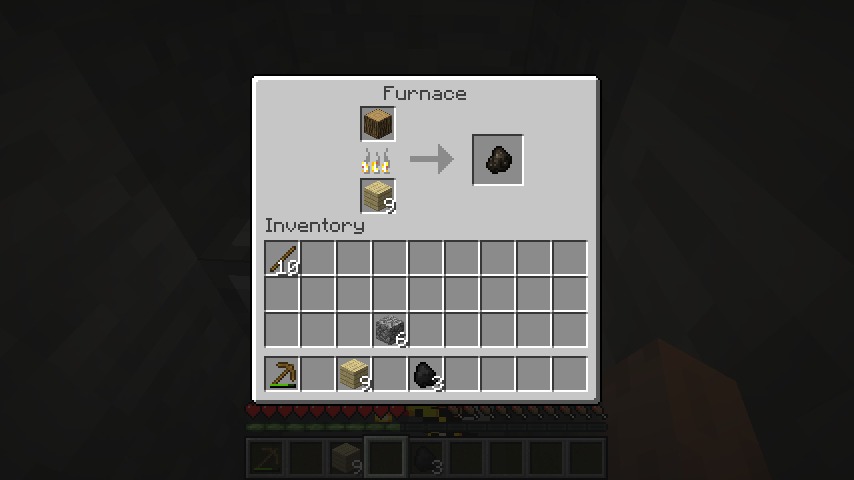 Once you have charcoal (or coal, if you could find some), you can craft four torches by placing a lump of charcoal on top of a stick. Once equipped, torches can be placed just like you did with the crafting table and furnace. 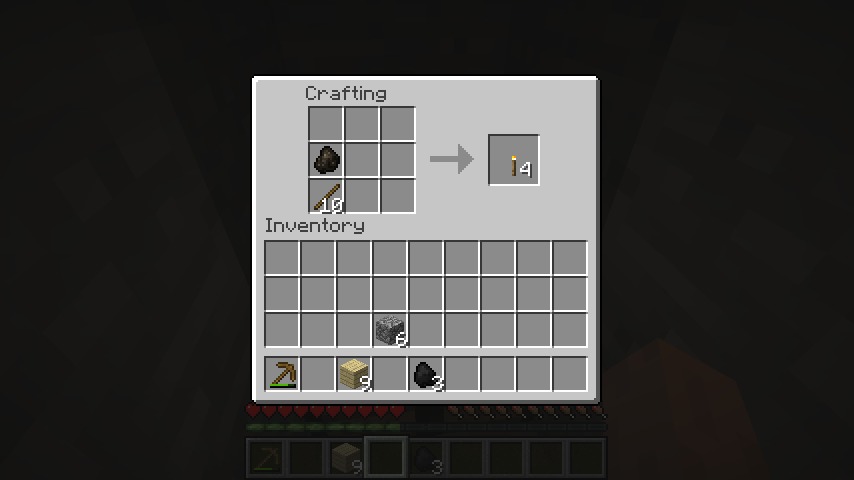 You’re probably running out of time, so you’re going to need shelter. The easiest thing to do is to dig a hole in the side of a mountain or hill, blocking off the entrance except for a small opening to see when the sun rises. Plant some torches in your tiny cave to keep monsters from spawning. 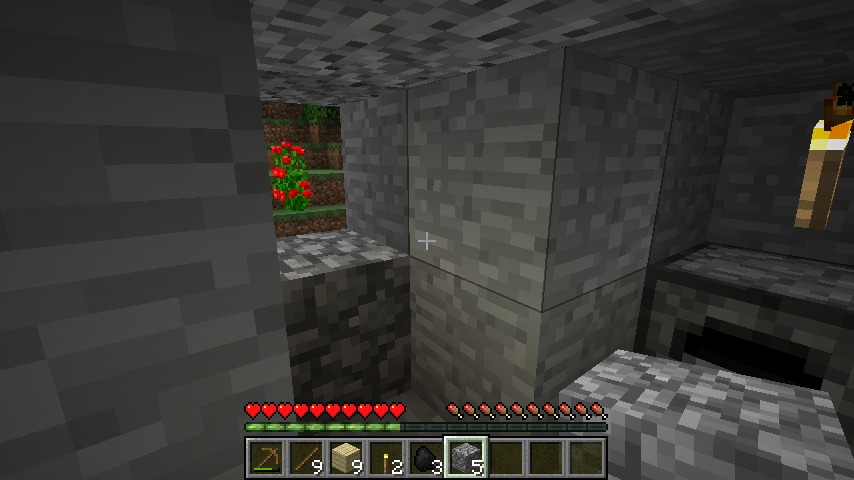 But, what do you do if you leave your cave in the morning and are approached by some ghastly beast? If you have time, you should craft a sword to defend yourself, which can be made with two stone blocks stacked on top of a stick. 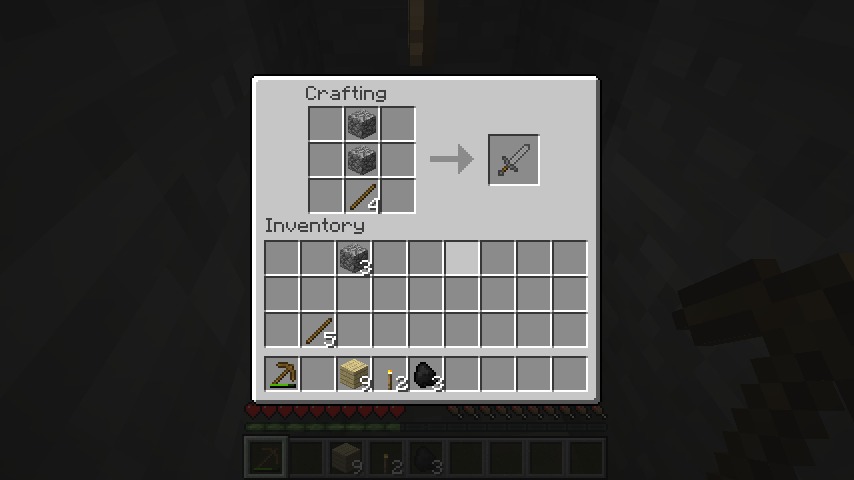 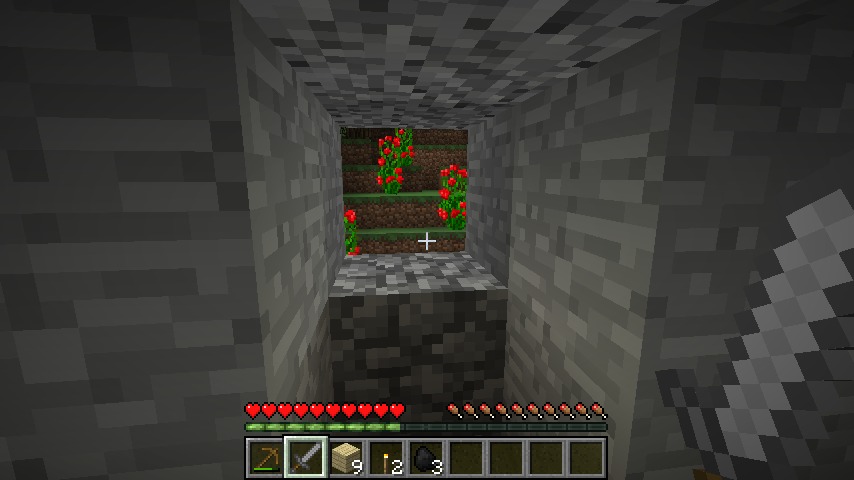 Now you have the knowledge to survive your first “day” in Minecraft. Whew! As you can probably tell, my instructions scratch only the dust in the surface of the game. As you play longer and interact with others — there’s a huge player community around Minecraft that shares information online —
you’ll learn about food, farming, animal breeding, fishing, villages, enchantments, redstone electronics, multiplayer, and the hidden Netherworld, among much else.

Minecraft is the most mind-blowing game I have ever played. It’s part sandbox, part world-builder, part exploration game, part farming simulator, and part role-playing game. It has a “conclusion” of sorts (that you must discover on your own), but it never truly ends. You can play alone or with others, and you can even run your own Minecraft server and invite just your friends to play on it. It’s all too easy to spend thousands of hours in Minecraft, and millions of people already have.

Sadly, Notch and the gang that created the game are leaving Mojang once Microsoft takes the helm. I only hope that Redmond can take good care of it. There have been many attempts to replicate its success, but Minecraft is one of a kind.