As gaming becomes a bigger and bigger business, it also becomes more and more serious. Back in the 1980s and 1990s, when you thought of gaming, you probably thought of a little Italian plumber who eats magic mushrooms and jumps on turtles. Or maybe an animated circle that eats dots while being chased by ghosts. At the risk of sounding like Old Man Centers, games were quirky and fun. These days, it seems like the face of gaming is a bald, angry, usually white man with a grimace and a gun.

And if you think that trend in gaming doesn’t have an effect on your life, consider that Dave Anthony, who directed Call of Duty: Black Ops and Call of Duty: Black Ops 2, is now advising governments on how to sell the public on a police state. “The public won’t like it, they’ll think it’s a police state,” Anthony said of putting soldiers in public schools. He likens selling policy to selling videogames: “We market it, and we market it as much as we can — so that whether people like it or not, we do all the things we can to essentially brainwash people into liking it before it actually
comes out.”

Yikes. But I digress.

I suppose the lack of originality from big game publishers is to be expected. As game development has become astronomically more expensive, big-name publishers have become more risk-adverse. When they gamble $50 to $100 million on a single game, they demand a return on investment.

The good news is that smaller, more agile developers have an opportunity to cash in with originality, as developer Coffee Stain Studios has with the surprise hit Goat Simulator, which has sold nearly a million copies. It’s now available for the iPhone and iPad for $4.99 (99.8 MB). Check out the official trailer.

How did a game about goats become a smash hit? Before I try to answer that, let me describe the game briefly.

The title might make you think that you manage virtual goat herds, but the name, like the rest of the game, is a joke. The easiest way to describe it is as a parody of the Tony Hawk games, where you thrash around a neighborhood on a skateboard, pulling off tricks for points.

Except in Goat Simulator, you control a goat who trashes a neighborhood (which represents purgatory) for points. You can ram people, objects, and other players; lick things to drag them around; and faint, which leaves you helpless on the ground.

Goat Simulator gives you a lot of toys to experiment with. Cars explode when you ram them, and if you ram a gas pump, it creates an explosion that action-movie director Michael Bay would heartily approve of, flinging you across the map. There are trampolines to jump on, protesters of pointy food to chase, houses to trash, and even a swimming pool. 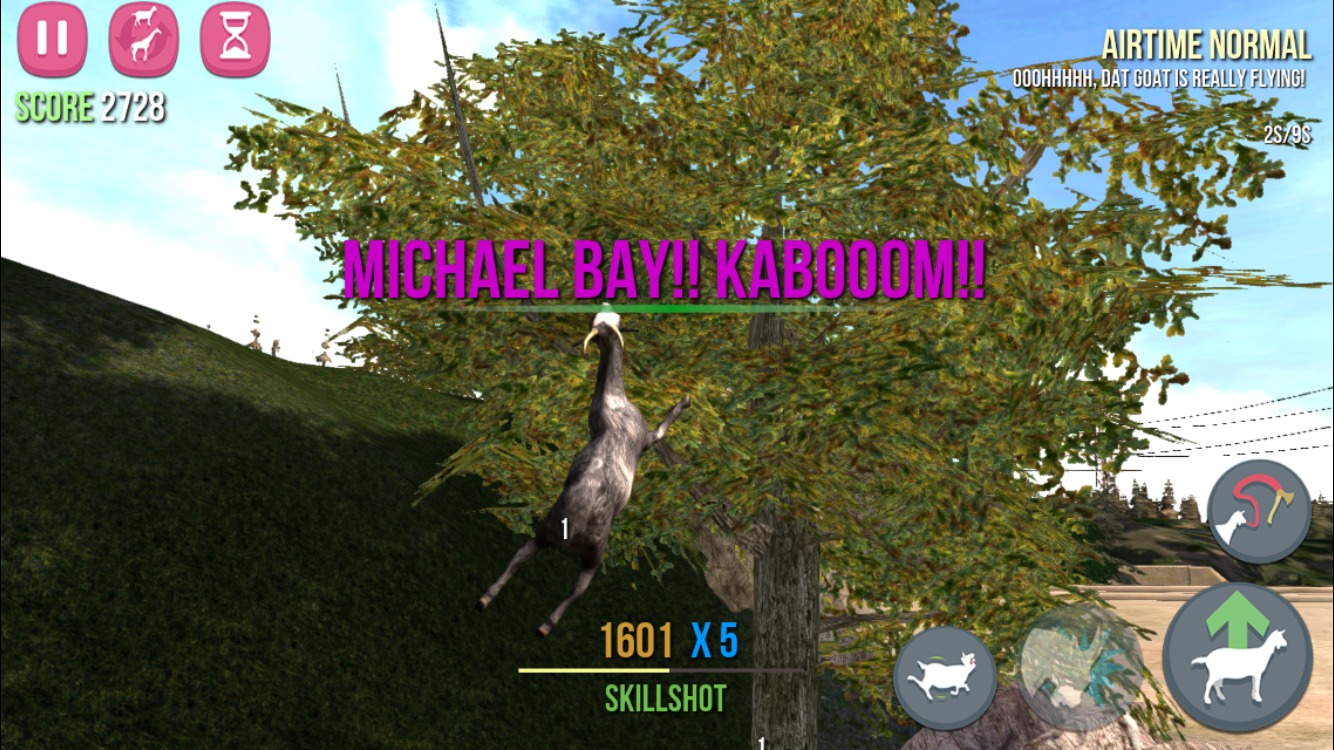 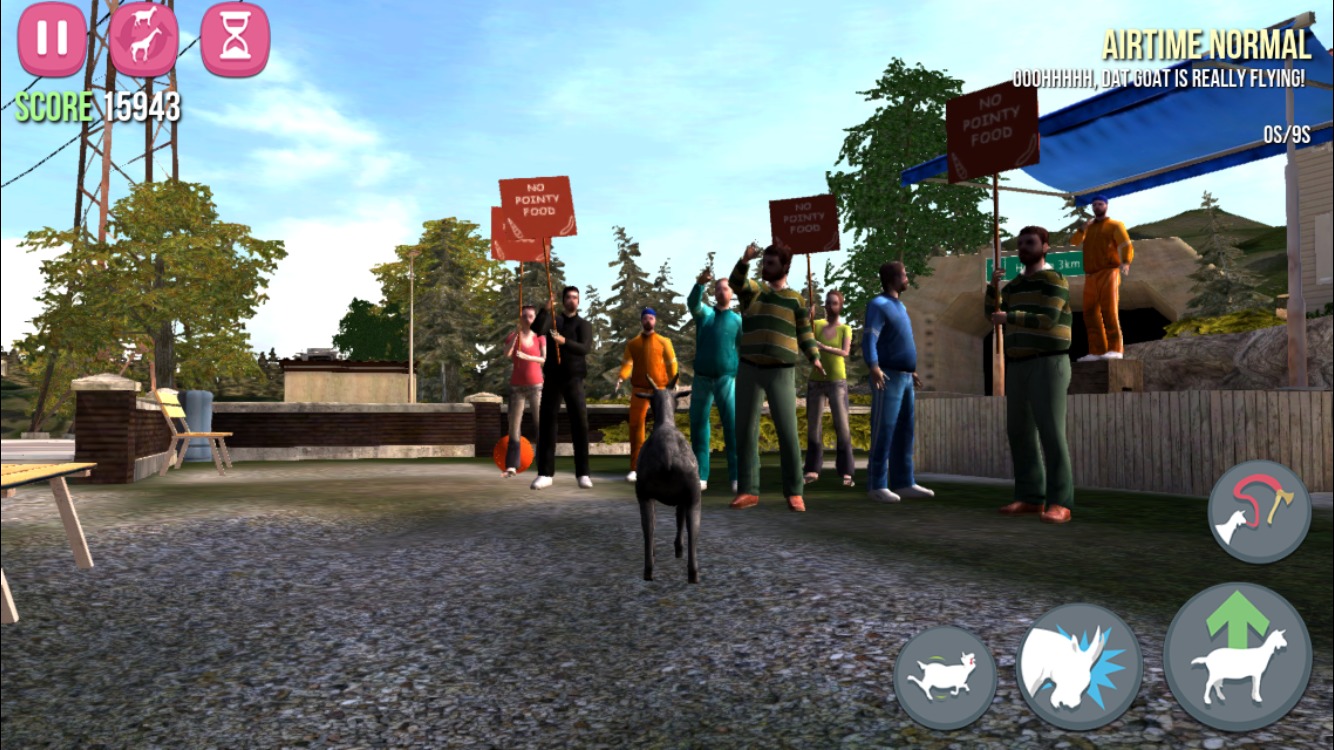 There are also different goat modes you can unlock and play with, like the Classy Goat (which is a penguin), Spider Goat (who bears a resemblance to a certain super hero), and the Goat Queen (the unlocking of which requires a pseudo-Satanic ritual). You can also equip your goat with a jetpack,
which works about as well as you might think. 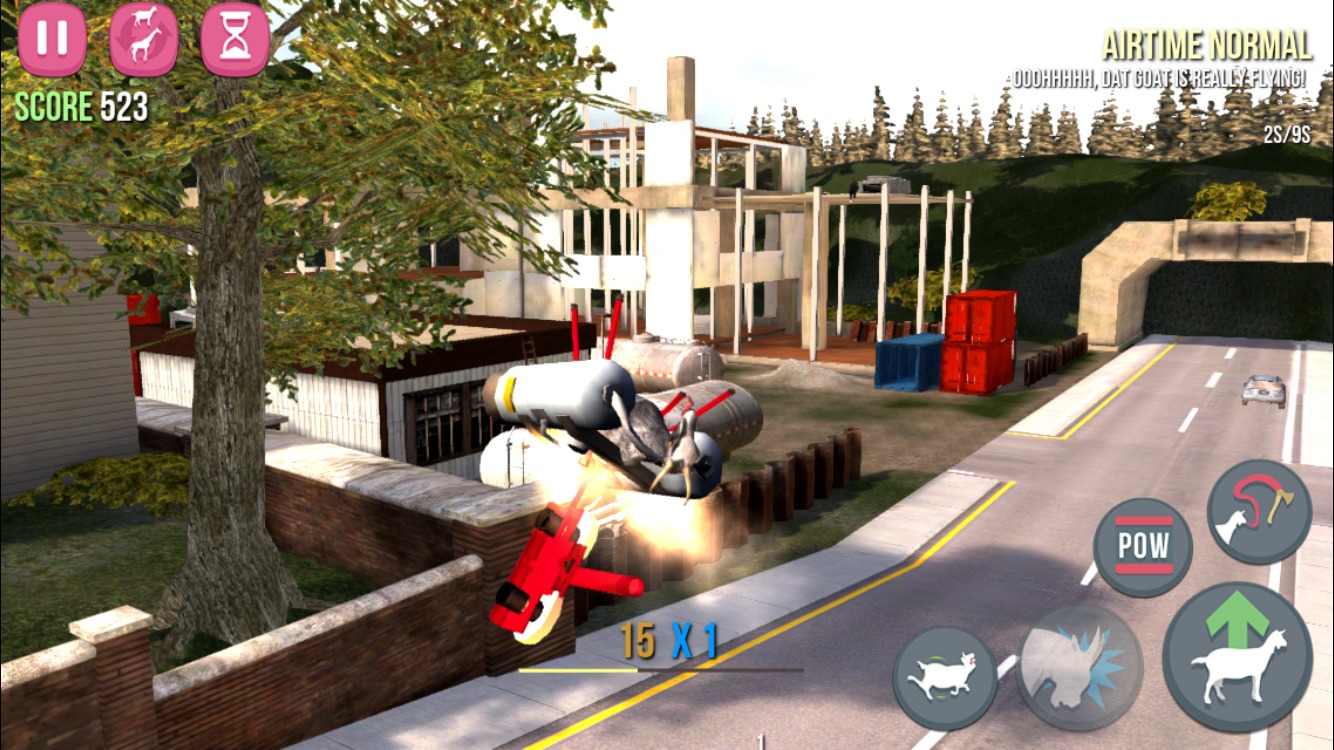 One of the things that adds a certain bizarre charm to Goat Simulator are the visual glitches that were intentionally left in place. The goat’s head often clips through fences and rubberbands in weird ways. There’s no animation when climbing a ladder; the goat just sort of hovers up, its head bobbling around like an over-caffeinated bobblehead. 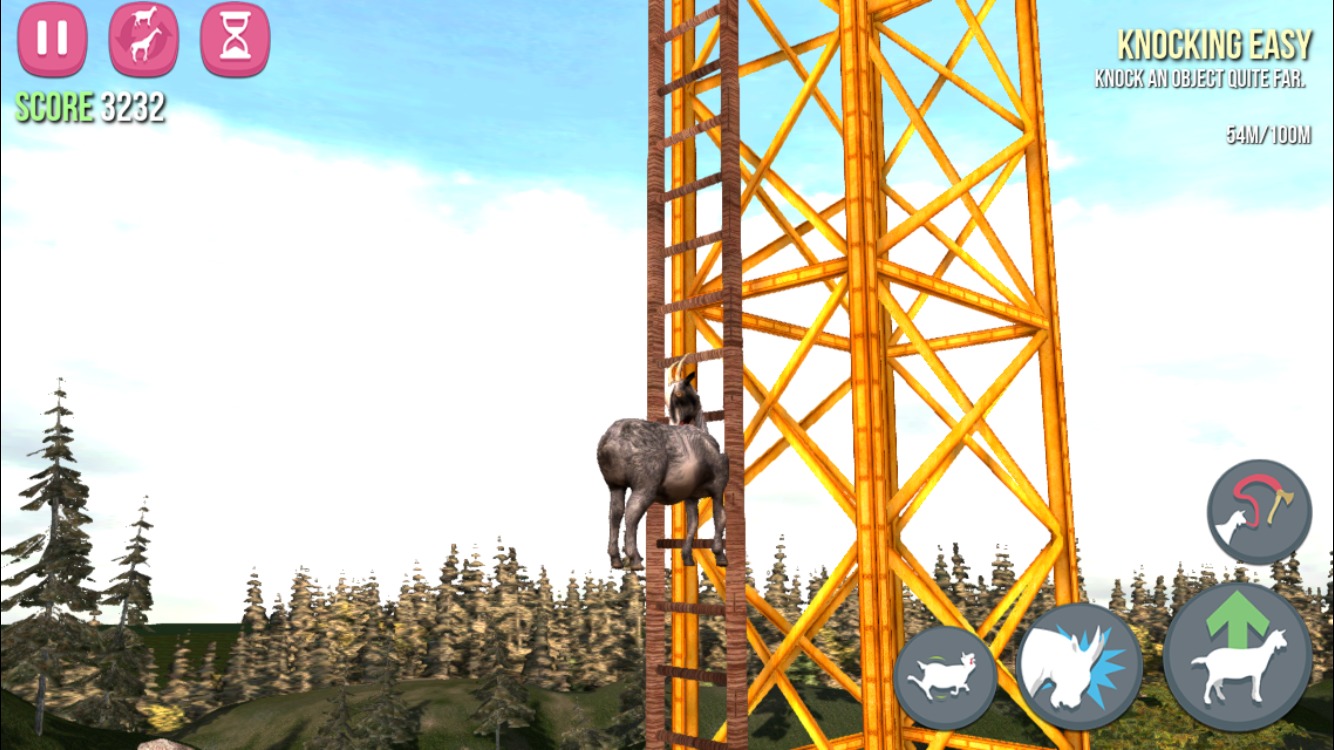 There is no point to Goat Simulator, though there are achievements to unlock and goat statues to collect. But despite being run over and blown up repeatedly, your goat is never injured. Nor are the people it terrorizes. There is no end game to speak of, just endless violent silliness.

Is Goat Simulator the best way you can spend $4.99 in the App Store? Honestly, no. There are plenty of less-expensive games that will provide more fun for longer. At best, Goat Simulator is something you may spend a few minutes or hours on, then rarely pick up again.

That being said, I love the fact that Goat Simulator exists. Apparently, I’m not alone, as it quickly shot up to near the top of app store top charts at launch, selling 100,000 copies for both iOS and Android in less than 6 days.

So what it is about an eccentric, limited game that people have found so compelling? I think it’s that the concept itself is so strange. Playing as a goat, instead of a person, offers a degree of disconnection that lets the player rampage through the virtual world, with less of that uncomfortable sense of identification. Other touches, like the animation glitches, enhance this sense of otherworldliness, making Goat Simulator an even more potent diversion. And ultimately, what is the purpose of gaming if not to escape from reality for a while?