I had a sad phone call with Paul Kent of IDG World Expo last week, during which he shared the news that IDG is putting Macworld/iWorld “on hiatus” after a 30-year run. There will be no show in 2015, and I think it’s safe to say that there will never be another Macworld Expo as we have come to know it. The separate MacIT event, which focuses on deploying Apple technologies in the enterprise, will continue in 2015, and Paul will be shepherding its next instantiation. 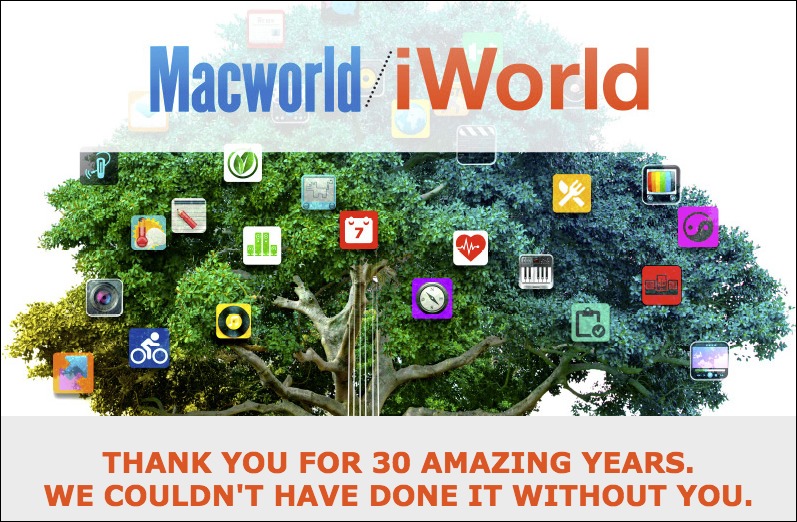 Macworld/iWorld will not take place in 2015 and the show is going on hiatus. The show saw a remarkable 30 year run that changed the technology industry, provided an important forum for Apple developers to bring new companies and products to market, delivered world class professional development to Apple product enthusiasts, and fostered the development of one of the most dynamic professional communities in the tech marketplace.

On behalf of IDG World Expo, we’d like to take this opportunity to thank you for having been an important part of this incredible journey. We offer our deepest appreciation to the entire Macworld/iWorld community.

Our MacIT event, helping Enterprise professionals with their Apple deployment projects, will continue in 2015 with exciting details to be announced in the coming weeks.

With this announcement coming on the heels of Macworld putting its print edition to rest, it has never been more clear that the massive changes engendered by the Internet have reshaped the world we live in. While at the Çingleton conference last weekend, I was reminiscing about my first Boston Macworld Expo in 1989 and the many pounds of paper I collected. Picking up brochures and handouts from every vendor was an essential task back then, since it was the only way to create a reference database of product information. When Tonya and I moved to Seattle in 1991, we brought four file drawers full of paper with us; when we returned to Ithaca in 2001, we didn’t even bring the empty filing cabinets
back.

(As an aside, Çingleton won’t be continuing in 2015 either, but the underlying reasons are completely different. Çingleton, like predecessors C4 (see “C4 Conference Rethinks MacHack,” 20 August 2007) and MacHack/ADHOC (see “Adieu ADHOC,” 1 August 2005), was a small hotel-based conference put on by just a few people, not a corporation devoted to event management. While there were undoubtedly other factors, the key one in Çingleton’s case was the amount of time and effort it took out of the lives of the organizers, who had other jobs and businesses to run.)

Apple pulling out of Macworld Expo was a blow (see “Macworld Expo 2010 Reboots,” 15 February 2010), but the real knife in the side of the show — of most trade shows — was the rise of the Internet. For those of us in the press, meeting and talking with companies at the show was still worthwhile, but for normal users, it had become easier to learn about and get support for products online. The traditional trade show simply couldn’t compete.

The other sea change that hurt Macworld Expo is one that I still don’t fully understand. In the early days of the show, money flowed like water. Big companies paid tens of thousands of dollars for spacious booths and flashy parties, and while products cost significantly more back then, the overall market was far smaller. Now, even with Apple posting record profits every quarter and hundreds of millions of people using Apple devices, few Apple developers approach the size of the firms that filled multiple exhibition halls during the biannual Macworld Expos. The parties dried up even earlier, and while I can’t say that a party or even a booth was a worthwhile marketing expense, clearly people thought so back in the day. Perhaps the
profits are there, but are spread out across so many more developers that few have the wherewithal to shoulder such marketing expenses. Or perhaps individual companies do have the money, but are using it for other purposes entirely.

Regardless, Macworld Expo is gone, and it will be missed. I can’t see any exhibit floor–based trade show springing up to replace it, but small, focused conferences are the future. Çingleton may be over, but I know of at least three more such conferences taking place in the next few weeks, CocoaLove in Philadelphia, NSScotland in Edinburgh, and MacTech Conference in Los Angeles, the last of which Tonya and I will be attending again. (Registration closes very soon for all three!) Further out, there’s the 2015 Úll conference in Ireland (see the Úll 2014 page for a sense of what goes on — I believe it’s pronounced “ool”), and I’m sure we’ll see others popping up as well.