At last week’s Apple event, Apple unveiled the new entries in its iPad lineup, after having accidentally leaked some of the details the previous day with a premature upload to the iBooks Store of the new “iPad User Guide for iOS 8.” Unsurprisingly, the new iPad Air 2 and iPad mini 3 are not innovative new takes on the tablet, though they do feature well-considered evolutionary enhancements to their predecessors — which remain available for purchase at lower prices. As a result, the iPad line now consists
of, depending on how you count, some 22 different models. And that’s before you take case color into account.

Let’s look at what’s new and what’s not so new.

iPad Air 2 — The latest full-size iPad is the iPad Air 2, the successor to last year’s iPad Air. (Thankfully, Apple has returned to numbering its iPad models, rather than reusing the same name for each successive model.) The iPad Air 2 features the same screen resolution (2048-by-1536 pixels at 264 pixels per inch) as the iPad Air, and to a casual observer it might appear indistinguishable from the original iPad Air. But it’s not. 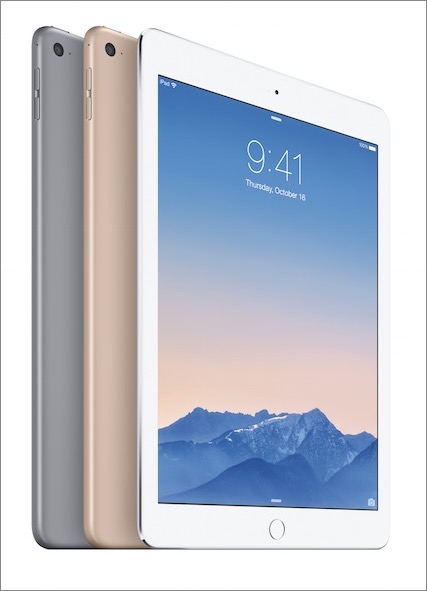 First, though the display resolution is identical to the older iPad Air, the iPad Air 2 features a display that is fully laminated, eliminating the air gap between layers, and adds an anti-reflective coating to improve visibility in bright conditions.

It’s also faster. The iPad Air 2 features a version of the same chip that’s in the iPhone 6, modified for the iPad line. Apple claims that its A8X chip provides 40 percent faster CPU speeds and 2.5 times the graphic performance of the original iPad Air. The new model also sports an M8 motion co-processor chip (a generation newer than the M7 found in the older iPad Air).

The backside camera has been raised to the same 8 megapixel resolution as the iPhone 6 cameras, with a fixed f/2.4 aperture, and, by virtue of the faster processor, can now shoot burst-mode images and take slo-mo videos. The front-facing camera remains on a par with the previous version. However, a second microphone has been provided to improve audio recording when shooting videos.

Wi-Fi has been slightly enhanced as well with the move to 802.11ac, making it a Wi-Fi speed demon capable of up to 866 Mbps of throughput. Apple also says the cellular model supports more LTE bands (20 of them) and up to 150 Mbps of throughput.

The iPad Air 2 also boasts two new sensors: a barometer (it can watch you climb stairs like your iPhone 6) and a Touch ID sensor. The Touch ID sensor makes the iPad Air 2 capable of using the new Apple Pay system for online shopping, and enables it to work with all the Touch ID-savvy apps that have begun to appear in the wake of iOS 8’s release (see “1Password 5 Touches New Heights in iOS 8,” 1 October 2014). Interesting factoid: Apple claims there are now over 675,000 iPad apps in the App Store.

The base-model iPad Air 2 is available at the same price point, and with the same amount of flash storage provided, as the previous base model: $499 for 16 GB. However, as with the iPhone 6, Apple has dropped the previously available 32 GB tier, offering only 64 and 128 GB options, each for an extra $100 premium (add another $130 for cellular capability at each tier). A new gold color has been added to the previously available silver and space gray finishes. 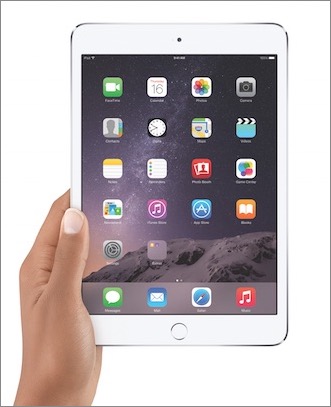 The iPad mini 3 has not changed in size or weight from its predecessor, nor have any of its other specifications changed much, other than the addition of the Touch ID sensor and a gold model to supplement the silver and space gray varieties.

Older Models Still Available — The new iPads are not the whole story, though. Apple is continuing to sell the original iPad Air (with 16 GB for $399 and 32 GB for $449; add $130 for cellular models) in its original colors.

In other words, Apple offers iPad models that are now among the cheapest tablets on the market, with all of them capable of running the latest version of iOS.

Pre-orders for the newest iPads can be placed now, with availability scheduled for later this week.

For those who want every Apple release to be a radical departure from the past, there is much to ho-hum about the new iPads. But for the rest of us who simply want an iPad that is a worthy update to an already well-defined and successful product, Apple has once again delivered (for cogent thoughts on why this is what Apple usually does, see Glenn Fleishman’s “Incremental Change Wins Apple Big Gains,” 29 March 2012).