It has been a busy week for the Updates pane in the App Store window, with various software updates being issued to provide Yosemite and iCloud compatibility, so you can be excused if you didn’t notice this one: Apple has updated its free iBooks Author ebook authoring software to version 2.2.

Though its toolbar now contains a curious blend of Yosemite-style and Mavericks-style icons, and with the app itself looking more like Pages ’09 than its Yosemite-enhanced descendent, iBooks Author has nonetheless received some under-the-hood enhancements to bolster its ebook-building prowess.

The change list is short and several of the items are no more than welcome usability tweaks. For example, the HTML widget can now provide on-the-page interactivity (formerly, the widget opened in a separate view when activated), several widgets that provide playback can now have auto-play enabled so that they start playing when a reader comes to that page, the Keynote widget now provides better transitions, and images can now function as hyperlinks. (There is another hyperlink feature touted — the capability to link to a
location in another book — but I couldn’t figure out how to create such a link, and the help was silent on the topic.)

iBooks Author also gains two new Blank templates, one for landscape books and one for portrait-orientation books, a gift to publishers who want to create their own book designs and who formerly had to do so by stripping the artwork out of an existing iBooks Author template.

The headline features in this update, however, are two new import capabilities — or, rather, Apple mentions two, but I found three.

The first is the capability to import Adobe InDesign IDML files. These are not actual InDesign document files (those are .indd files); rather, IDML is an intermediate format to which you can export InDesign documents so they can be opened in versions of InDesign other than the one in which they were created. iBooks Author users can access this import feature by choosing Insert > Insert Chapter From > InDesign File (IDML).

The second import capability is support for EPUB (or, as Apple incorrectly spells it, “ePub”) books. This feature merits a top-level place on the File menu: File > New from ePub File. Just for larks, I tried this out on my own EPUB of “Take Control of iBooks Author” (which I hope to update soon).

This was a particularly interesting book with which to test the EPUB import feature, and not just because of the topic — Take Control books generally tend to push the EPUB format rather hard, as they incorporate varying list styles, embedded graphics, multiple fonts and various colors, and lots of internal and external links. Nonetheless, the EPUB imported in a matter of a few seconds, somewhat surprising given that it’s over 7 MB in size: most novels in EPUB form clock in at under 1 MB. Even more surprising, the results, while not perfect, were quite good. I imagine it would take me only a few hours to clean up the rough edges. 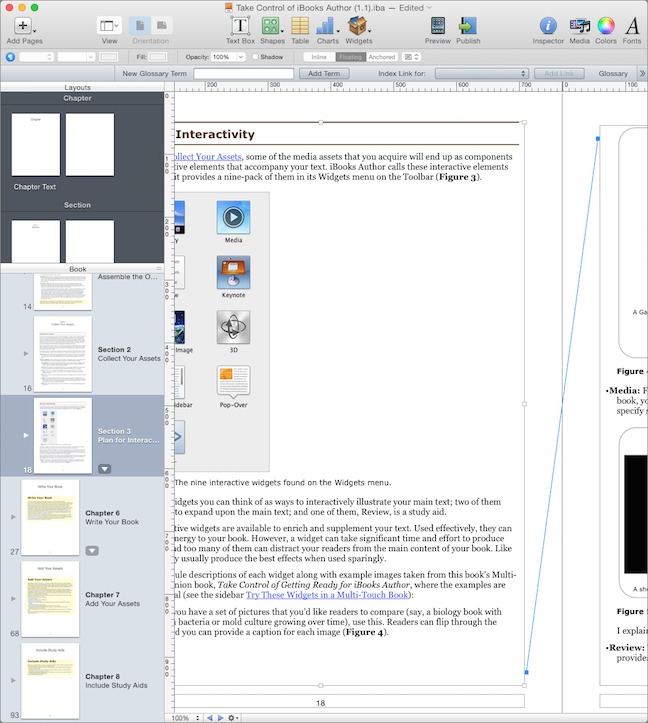 The third new import capability was likely not mentioned by Apple because it is embarrassing. Although iBooks Author has, from the beginning, been able to import Pages files as chapters, the app could only, until now, bring in Pages files produced by Pages ’09. At long last, though, it can import files both from that version and from the current Pages 5.5.

The changes to iBooks Author in this latest update are welcome indeed, and make the free app even more useful for both casual and professional ebook publishers. However, it’s time that Apple turned some serious design attention to the app so that it matches the look and feel of Yosemite. And, who knows, maybe even give it the capability to export EPUB as well so it could be used to create books that could be read beyond the iPad and Mac, and sold in places other than the iBooks Store.