Wi-Fi is a mature part of OS X, but Apple likes to tinker, and OS X 10.10 Yosemite brings a tinkling cascade of tiny changes, from new information and a new way to display data in the Wi-Fi menu to removing the last vestiges of the long-outdated and completely broken WEP (Wired Equivalent Privacy) encryption protocol.

With iOS 8.1 installed, Yosemite also adds a nifty way to activate Personal Hotspot from your Mac instead of your iOS device.

An Expanded Menu of Hidden Data — The Wi-Fi menu (previously known as the AirPort menu) has long concealed a hidden treasure trove of performance and connection data that’s revealed when you press the Option key before clicking the menu bar icon. For the last few releases, it has contained seven pieces of data about any network to which you’re connected and five items about others, visible when you hover over their names.

Yosemite adds a new option to the hidden menu as well as several new bits of network data. These help you diagnose network problems quickly, without the need for other software.

Taken together, this information can help you sort out network difficulties. If you always see 20 MHz in the Channel line, but the PHY (physical protocol mode) is 802.11ac, you have other networks in the vicinity on the same or adjacent channels that are forcing the base station and client to negotiate a slower rate; moving the base station or forcing a different channel could help.

If your noise value is very high (like -30 dBm instead of -90 dBm), there’s interference from other devices, Wi-Fi or otherwise, in the same band, and you again may need to move the base station or pick a different channel.

(Apple also added a number of tweaky options in its Wireless Diagnostics program, which you can open from the hidden Wi-Fi menu. I’ll go into the particulars in the next edition of “Take Control of Your Apple Wi-Fi Network.” Apple has a perverse need to fiddle with this app: this is the fifth distinctly different version across four operating system releases.)

The Final Death of WEP — WEP was Wi-Fi’s first encryption standard and was almost intentionally designed to be weak. It had to work on the slow silicon of the day, and couldn’t be too robust due to issues surrounding U.S. export policies related to encryption. Starting over a decade ago, effective attacks rendered WEP protection essentially useless, and it was abandoned beginning in 2003 with WPA and then in 2004 with the full-fledged WPA2. The only encryption that may be used with 802.11n and 802.11ac networks is WPA2. Every Wi-Fi adapter released starting in 2003 included or could be upgraded to use WPA2. (A lot of point-of-sale systems continued to use WEP until
recently — some still do!)

Apple persisted for the longest time in allowing only WEP encryption for ad hoc computer-to-computer networks (a special Wi-Fi mode) and in the software base station mode available by sharing a networking connection in the Sharing preference pane. Finally, in 10.8 Mountain Lion, Apple let the software base station use WPA2, but had a hidden Option-click trick to bring up WEP (see “Software Base Station in Mountain Lion Adds Modern Encryption,” 30 July 2012). 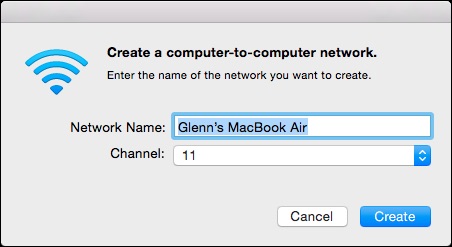 Yosemite kills WEP once and for all. Ad hoc networking offers only unencrypted connections, which I can recommend only if there are no other computer users in your vicinity. There is now no way to prevent someone from joining an ad hoc network or sniffing the traffic passing by. Use other approaches to sharing files, like AirDrop or Dropbox. The software base station now exclusively offers WPA2. I think users have had enough time to make the transition. 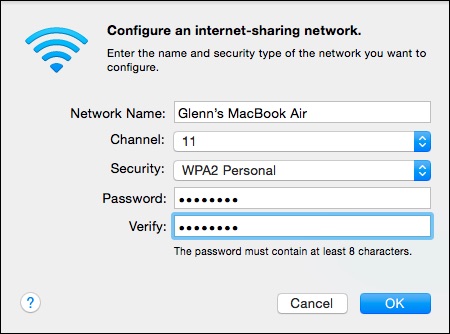 Hands-free Hotspot — Personal Hotspot dates back to iOS 4 as a way to use your iPhone (and later an iPad) as a Wi-Fi bridge to a cellular data connection. The feature improved substantially in subsequent releases, but it still requires a few steps to enable unless you both leave the feature turned on in iOS and tether via USB or Bluetooth.

The combination of Yosemite and iOS 8.1 removes that pain — oh, the pain of a few taps, I know! — with Instant Hotspot, if you have a recent Mac that supports the Continuity suite of features. The cutoff is mid-2012 for some models and later for others; Apple has a complete list of which Macs support which Continuity features.

Instant Hotspot shows nearby iOS devices in Yosemite’s Wi-Fi menu as long as the Mac and the iOS device are logged in with the same Apple ID in iCloud. The device appears with its battery life, cellular network connection type, and signal strength. Choose it from the Wi-Fi menu, and you’re connected. 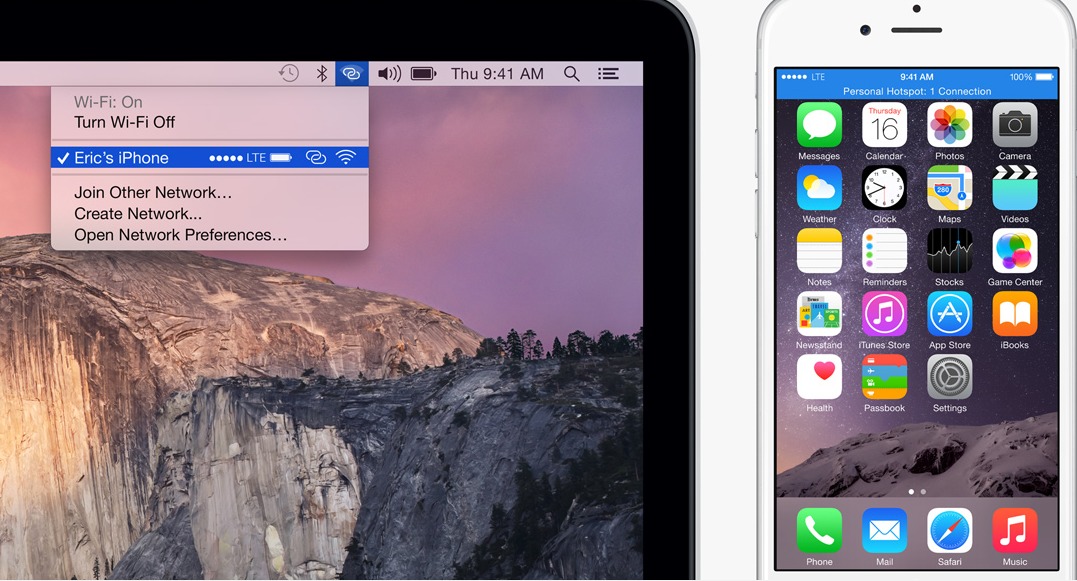 Instant Hotspot is pretty clever, too: it disconnects when the network isn’t in use to save battery life (both of your Mac, if it’s a laptop that’s not plugged in, and your iPhone or iPad), and it skips downloads of system updates and other large files to avoid using up data transfer allocations on cellular data plans.

Overall, these features aren’t groundbreaking, but for those of us who work with Wi-Fi networks, they’re entirely welcome, particularly the passing of WEP. At long last, I can say with confidence, “It’s dead, Jim.”