The new jumbo-sized iPhone 6 Plus has, for some, inspired the notion of an all-in-one iOS gadget. Why own and carry both an iPad and an iPhone when an extra-large phone can do the job of both?

The iPhone Plus may be just big enough. In fact, I wrote this article almost entirely on one while at my front-porch workstation, using a variety of wireless keyboards and a handful of writing apps, like Google Docs, Byword, and Pages.

While the iPhone 6 Plus won’t replace my iMac for serious productivity, it has the right hardware attributes for certain kinds of work — such as writing — when I’m away from my desk. The iPhone 6 Plus’s display is large enough to make text legible in either landscape or portrait mode.

But to get real work done, you need a physical keyboard. Few iOS users are like my pal and Mac blogger Patrick Rhone, who has been known to write long-form posts with only his thumbs on his iPhone screen. Ordinary mortals need solid keys beneath their fingertips.

You need the right kind of keyboard: one that’s large enough to type comfortably, but not so big that it’s a pain to carry. It should incorporate or include a stand, be reasonably inexpensive, and be solidly built.

I’ve tested a lot of keyboards in tandem with iOS devices (typically iPads) in the past, and not all of them are suited for use with the iPhone 6 Plus. For this article, I narrowed the field to keyboards that work best with Apple’s new smartphone.

Microsoft? — Although many don’t realize it, Microsoft has been making hardware accessories for ages, and has recently created some fantastic mobile keyboards.

One of these, the new Universal Mobile Keyboard ($79.95), works equally well with Android, Windows, and iOS devices. It even lacks the traditional Windows key, a first for a Microsoft peripheral of this kind. The Universal Mobile Keyboard comes in an elegant bundle with a stiff and rubbery-to-the-touch lid that flips open to reveal the keyboard. A slight minus: The rubber cover is a bit of a dust magnet. 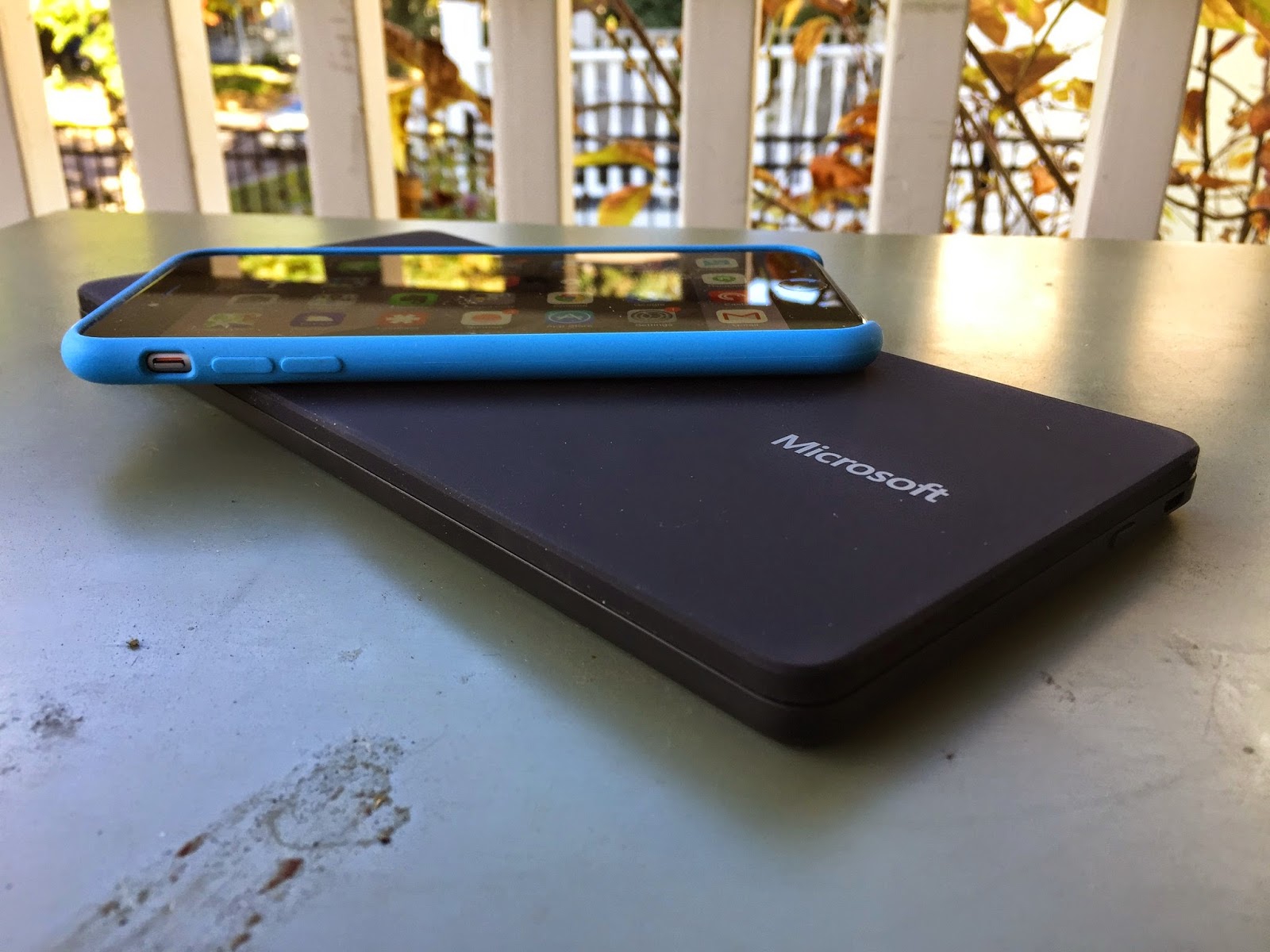 The lid’s underbelly becomes a device stand via a slot for a smartphone or a tablet. The stand can be used attached to the keyboard, via magnets, or separated from it. 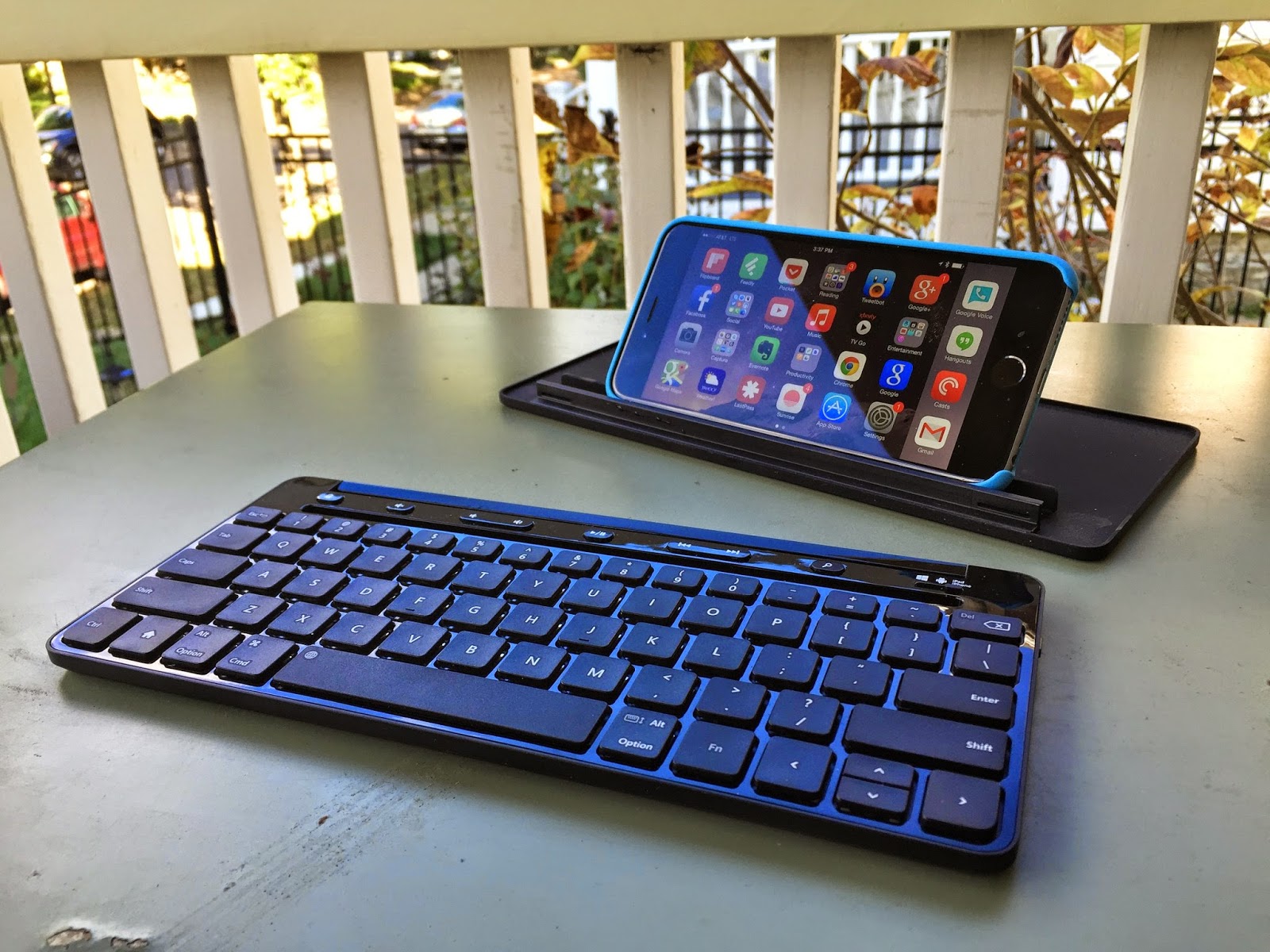 Unfortunately, the Universal Mobile Keyboard isn’t a perfect fit with the iPhone 6 Plus (or its smaller iPhone 6 sibling). The iPhone 6 Plus fits into the stand nicely in landscape mode, whether naked or in one of Apple’s cases. In portrait mode, though, the phone’s curved bottom doesn’t achieve proper balance in the slot. However, I did figure out that I could spin the lid 180 degrees to use the stand. 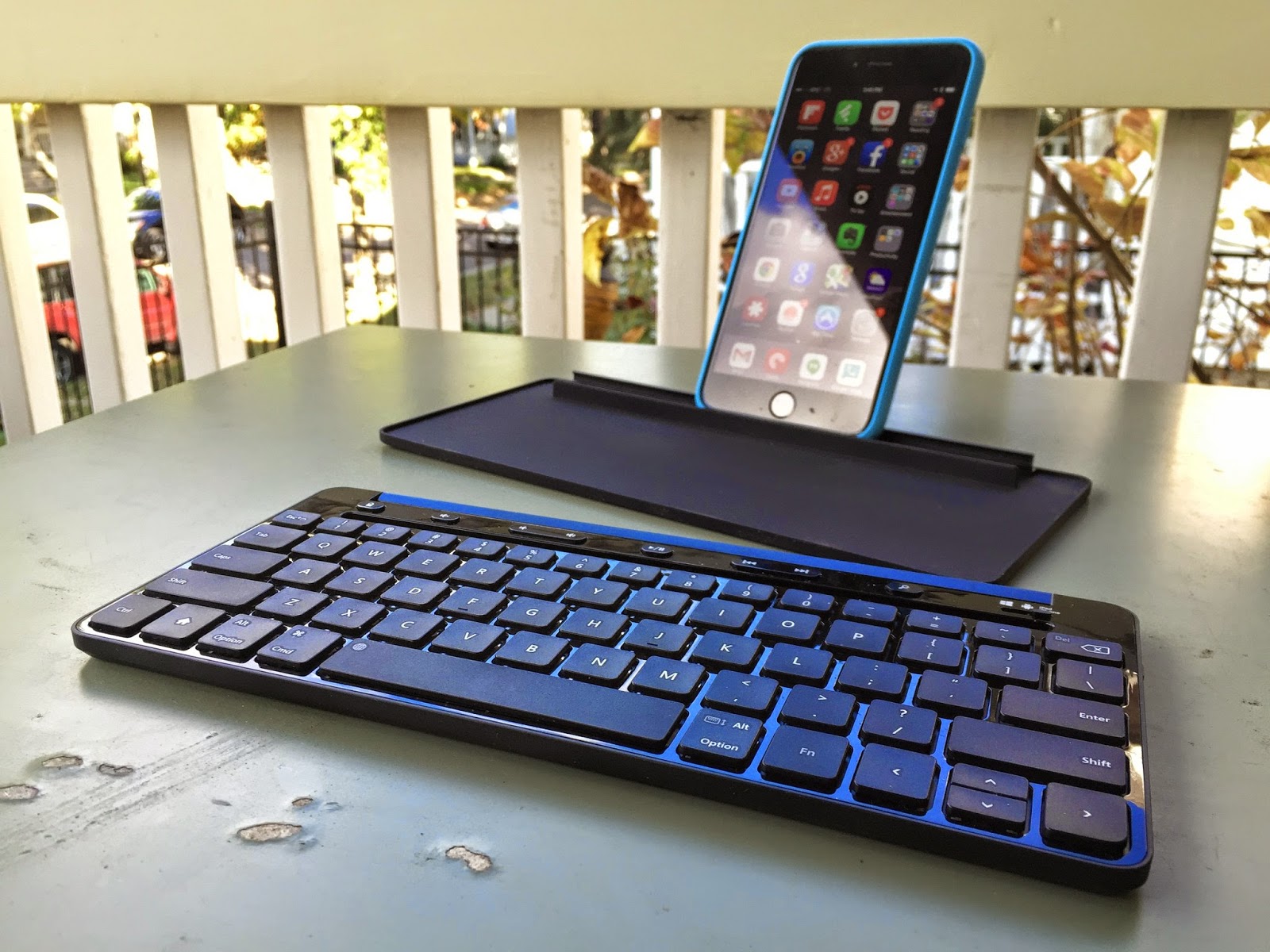 The keyboard, though cramped compared to a full-size keyboard, feels terrific for touch typing. It includes lock-screen, mute, volume, play/pause, and search buttons, along with a switch to quickly switch among iOS, Android, and Windows modes. You can use the keyboard with up to three devices using any of these operating systems.

Even with its imperfect iPhone 6 Plus compatibility, the Universal Mobile Keyboard is my go-to keyboard. It’s marvelously compact with a simple, elegant design that enables speedy typing.

Another of Microsoft’s mobile keyboards, the Wedge Mobile Keyboard ($79.95), has a compact configuration with a rubber cover that detaches and then folds into itself to become an adjustable stand. This works poorly with smaller phones, but it’s fine for tablets and larger phones such as the iPhone 6 Plus.

ZAGG It — ZAGG, a well-regarded purveyor of portable accessories, offers two portable keyboards especially suitable for use with the iPhone 6 Plus.

The ZAGGkeys Flex ($79.99) is an ultra-compact keyboard that looks and feels a bit chintzy but offers comfortable typing. It’s bundled with a suede-like wrap-around protector that folds into a surprisingly sturdy stand. The ZAGGkeys Universal ($69.99) has a curved and aesthetically pleasing design with a plastic cover that slides off the keyboard and turns into a device stand via its pop-out dock. It works nicely with the iPhone 6 Plus. The Universal is a bit
bulkier than the Flex, but has a more premium feel. 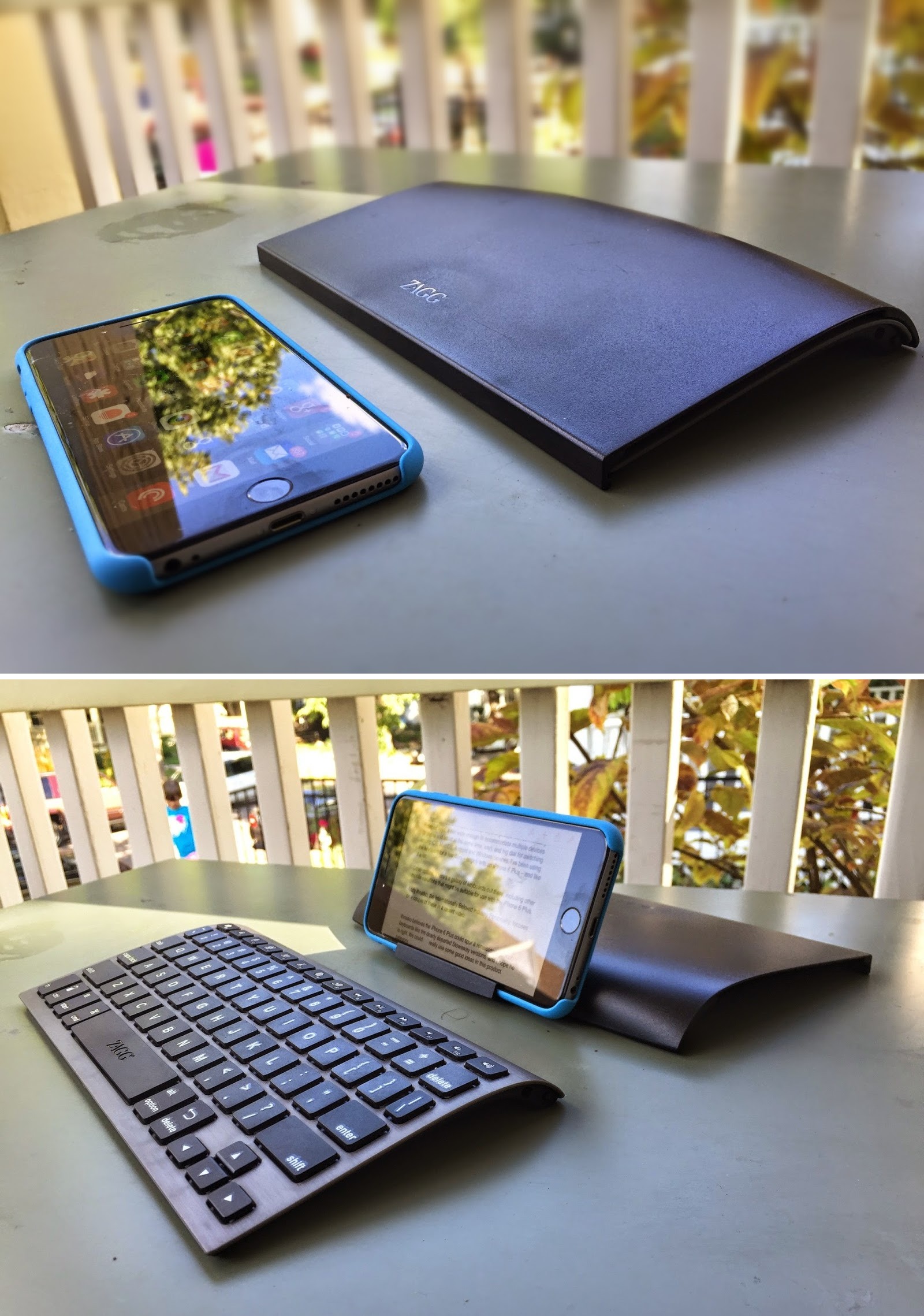 Apple Wireless Keyboard — Apple’s default wireless keyboard is officially a Macintosh peripheral, but it works just fine with iOS gadgets, even though it lacks iOS-specific keys. It’s far from the smallest keyboard in this roundup, but it is compact enough to be portable in many cases.

To hold an iPhone 6 Plus upright for use with the Apple Wireless Keyboard, I have a couple of suggestions.

The Incase Origami Workstation ($29.95) is a sturdy Apple-keyboard protector with a stiff flap that flips up and then folds back to create a pyramidal stand. Though officially intended for the iPad, this arrangement works well with just about any Bluetooth tablet or phone and performs nicely with the iPhone 6 Plus. The Origami Workstation is firmly attached to the keyboard, even when in workstation mode. Simpler and less expensive is the WINGStand kit, which consists of two plastic pieces (in white or black, $14.95 and $11.87 respectively) that slide snugly onto the keyboard’s cylindrical rear and become an integrated mobile-device stand. These doodads accommodate an
iPhone 6 Plus perfectly, even if it’s in a case. 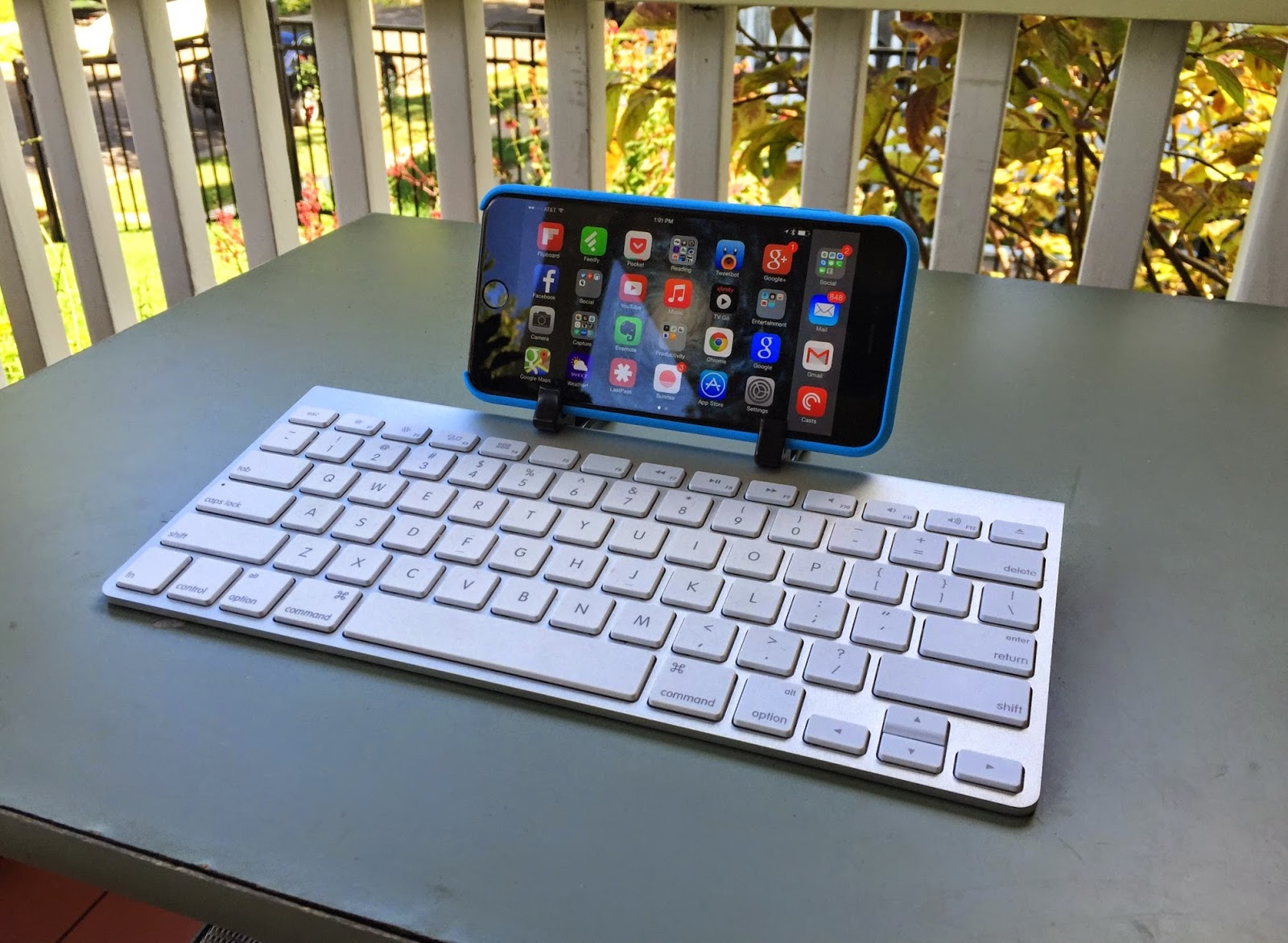 Cleverly, the WINGStand units can also be used while detached from the keyboard, if you want to move the propped-up iPhone a bit farther away on your desk while typing or watch a bit of YouTube while munching on your corn flakes. A Desktop Option — Logitech’s Bluetooth Multi-Device Keyboard K480 ($49.99), though bulky and therefore not terribly mobile, is worth a look because of its versatility and unique touches. 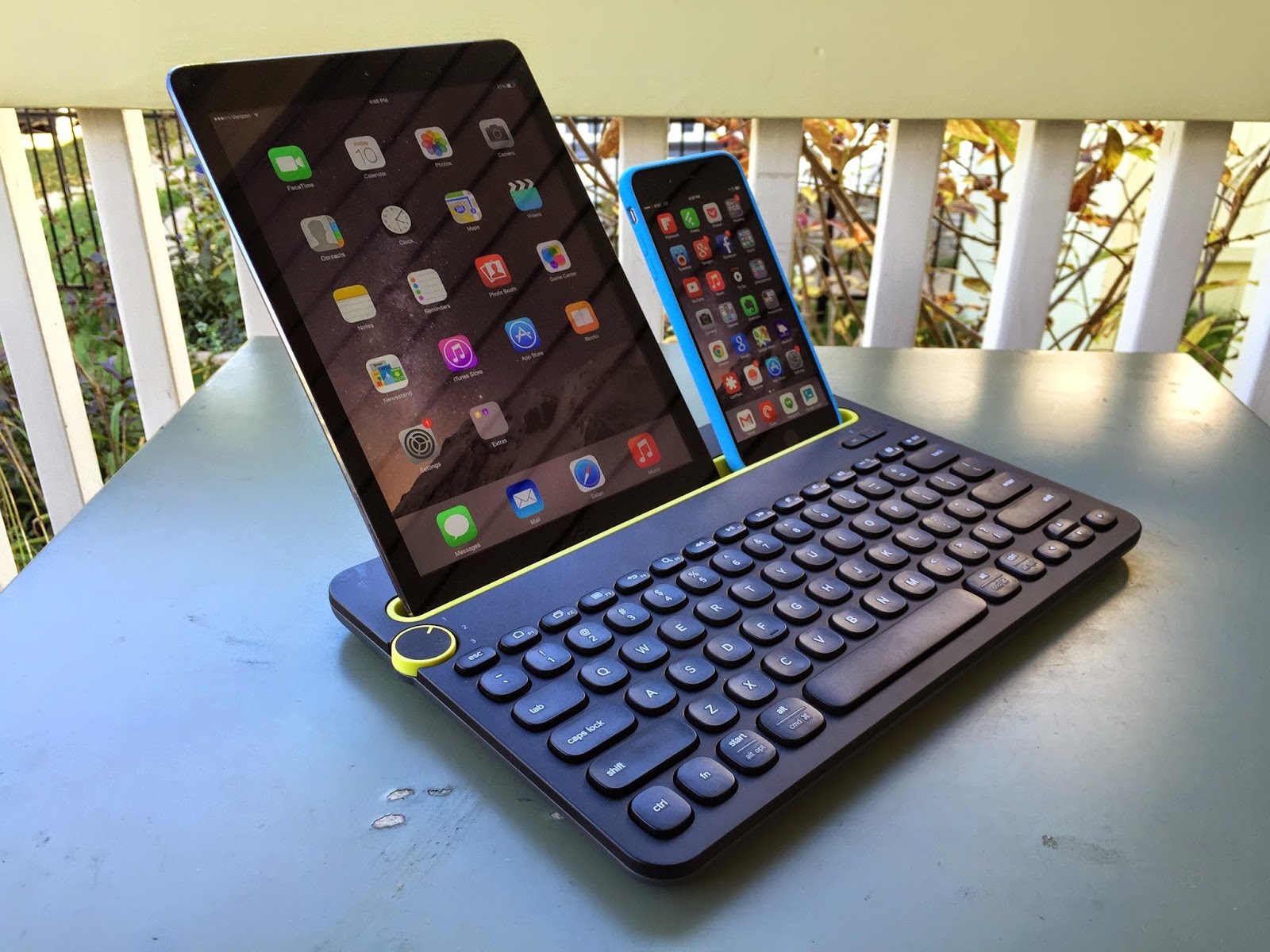 It is another OS-switchable peripheral, but with a twist — literally. Spin a colored dial on the keyboard’s upper-right corner to switch among any of three devices (iOS, Mac, Android, or Windows). The K480 also incorporates an extra-wide device slot that can hold an iPhone and iPad at the same time, among other combos.

The K480 has nicely scooped keys that feel comfortable, though they sound a bit clackity. Even so, after using it for a while, I like it a lot, and it’s a bargain at under $50.

Folding Keyboards — There’s another variety of ultraportable keyboard to consider here: the kind that folds and thus makes for a compact bundle when closed for transport.

This concept isn’t new. Some of us are old enough to remember the ingenious folding keyboards available a decade or so ago for use with Palm OS personal digital assistants and other, similar gizmos. Here is one such keyboard I have tucked away, for sentimental reasons: 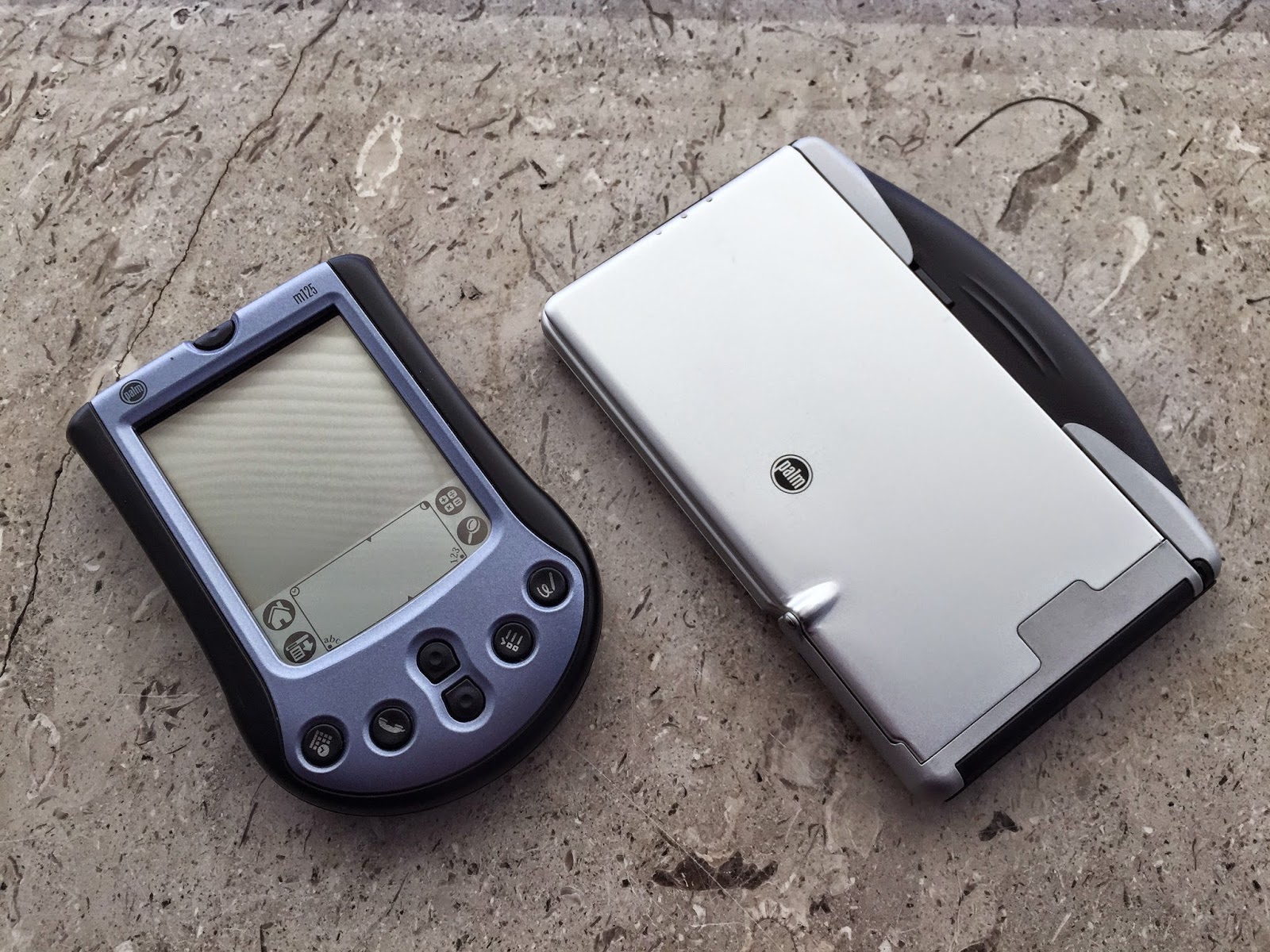 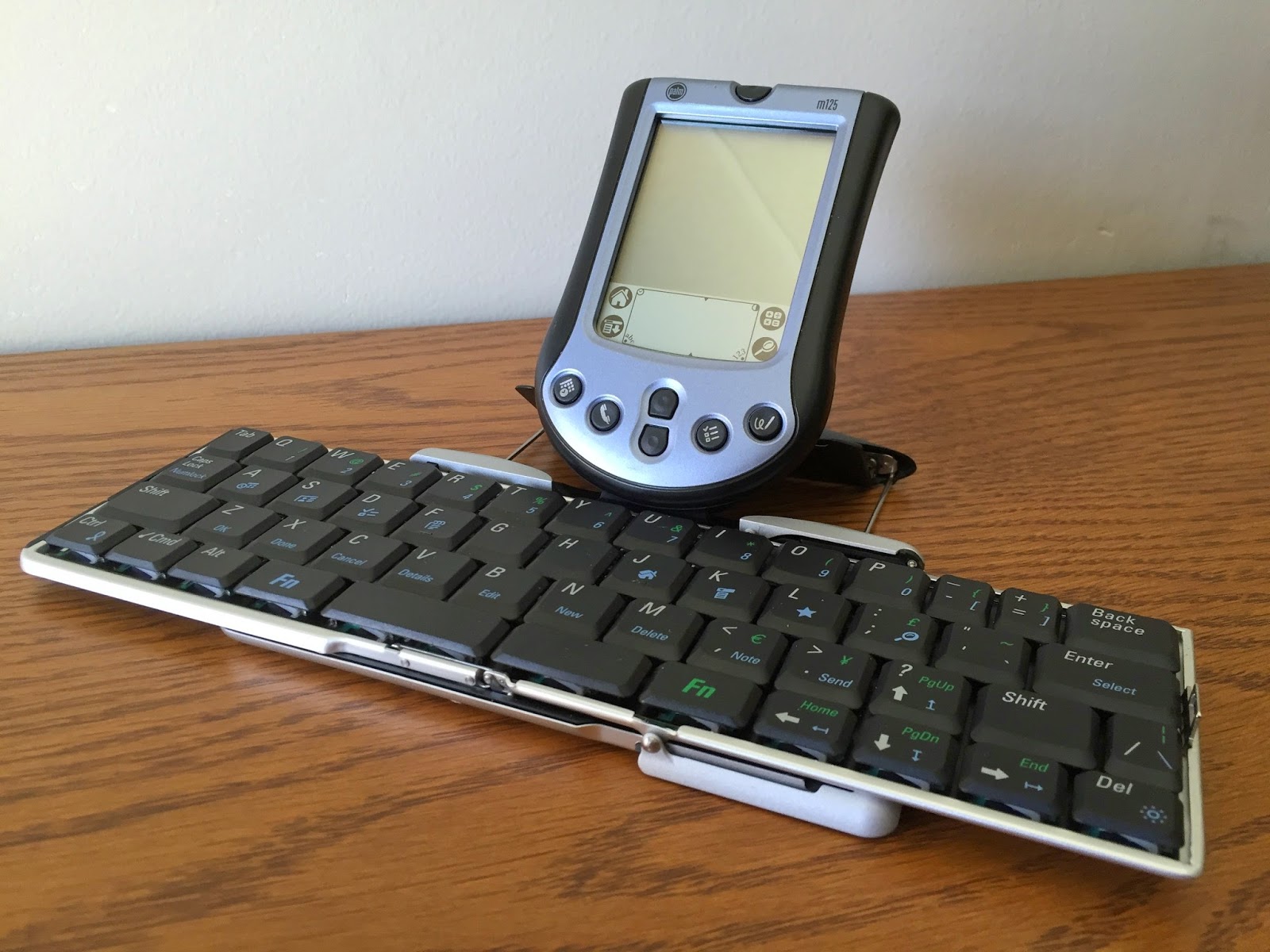 Sadly, neither this keyboard nor another folding model in my possession support Bluetooth, or I’d be using them with the iPhone 6 Plus. You can find a Bluetooth version if you look hard enough, but you’ll pay a steep price for a
new-in-the-box one since the keyboard was discontinued years ago.

A number of other folding keyboards are in production in a wide range of styles.

Verbatim’s Wireless Bluetooth Mobile Keyboard ($86) has a companion gizmo stand that lives in a slot within the upper right edge of the keyboard. The stand unfolds once it is removed from its storage bay but supports the iPhone 6 Plus only in landscape orientation and seems alarmingly flimsy. The keyboard itself is sturdy, folded or unfolded, with keys that are large and have a nice feel and plenty of throw. You’ll have to adapt to one quirk: Alt and Command keys are where your thumbs expect to find the Space bar, which on this keyboard consists of two smallish keys that require mild contortions to reach. The Verbatim keyboard kit includes a nice leather sleeve to protect the keyboard when it’s not in use. 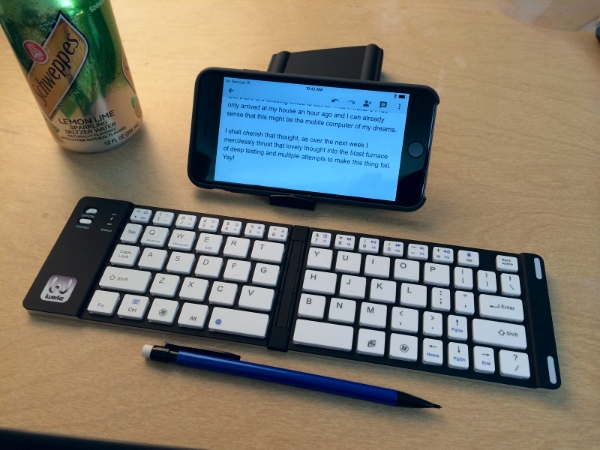 He later tried and thought highly of another folding keyboard, the LapWorks Amigo (139.95).

Conclusion — Even though I greatly enjoyed my bursts of work using the iPhone 6 Plus, I wouldn’t consider it a primary productivity setup. It’s smaller than an iPad mini, and even on its larger (but small for a tablet) screen I’ve had claustrophobic moments. I wouldn’t, therefore, recommend folks rely on iPhone-plus-keyboard combos except as an auxiliary work option.

Andy Ihnatko thinks this space is ripe for disruption as accessory makers derive inspiration from the big new iPhone to come up with fresh ideas. I hope he’s right. Though I mostly liked all of the keyboards I tried, they’re not transcendent.

That said, these keyboards are surprisingly effective and mean less weight to tote around. With your iPhone in your pocket, you have only a svelte mobile keyboard to tuck in your bag. Such a keyboard could be a perfect iPhone accessory to take on vacation when you’re leaving the laptop behind — you wouldn’t choose to work on it, but if something were to come up, you’d be a lot more productive with it.

Comments About Physical Keyboards for the iPhone 6 Plus