Although most of us don’t need to do so regularly, it is occasionally useful to make a movie of actions taking place on an iPhone or iPad screen. Happily, with iOS 8 and OS X 10.10 Yosemite, Apple has us covered. The key is the slightly misnamed QuickTime Player 10.4 and its File > New Movie Recording command, which has long enabled you to make simple movies with your Mac (not to be confused with the File > New Screen Recording command that you use to record actions on your Mac’s screen).

When you choose New Movie Recording, QuickTime Player fires up your Mac’s FaceTime camera and displays a video controller you can use to start and stop recording. Even if you’ve used this feature, you may not have noticed that the controller has an unobtrusive pop-up menu beside the record button: click it and you can choose input sources other than your Mac’s camera. Here’s what’s new: in Yosemite’s QuickTime Player 10.4, when you connect a device running iOS 8 to your Mac with a Lightning cable, those input
sources include both the iOS device’s audio and its screen. 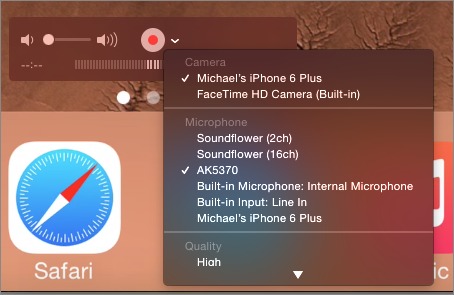 You can mix and match input sources: for example, you can record video from the iOS device and audio from your Mac’s microphone simultaneously. To shoot the movie, just choose your inputs, click the red button, and capture away. Then, to finish the recording, click the red button again, and you end up with a QuickTime movie (named “Untitled,” but you can change that). Like any other QuickTime movie, you can edit the movie with QuickTime Player itself,
iMovie, or any other video editing tool.

Interestingly, the capture is not quite faithful to reality. As you can see in the movie linked above, QuickTime Player replaces the status bar shown at the top of your iOS device’s display with a generic one, a display that shows perfect cellular reception, a perfect Wi-Fi signal, no cellular provider, a completely charged battery, and a clock that always registers 9:41 AM (the time of day when Steve Jobs unveiled the iPhone).

With version 10.4, QuickTime Player, which is simple, free, and available on every Mac, has become a great solution for those who occasionally need to record what’s happening on an iOS device’s screen. However, those who need to make professional-level screencasts of iOS apps should still look into a more powerful capture solution, such as Telestream’s ScreenFlow. Version 5.0, due out within weeks, will also be able to record directly from iOS devices, and ScreenFlow has numerous features to improve the screencast quality.

My only complaint with QuickTime Player’s convenient iOS video capture feature is that it doesn’t let me capture still images of my iOS screen as well. Maybe it will someday; for now, though, I guess I’ll still need to use one of the many other less convenient approaches for moving screenshots to my Mac.

Comments About How to Capture iOS Device Video in Yosemite