After I wrote “Moving to iCloud Drive” (15 October 2014), I received several messages asking me how to use iCloud Drive as a Dropbox replacement. As I said in several responses to those inquiries, “iCloud Drive is not a replacement for Dropbox.” But I don’t blame the inquirers for the confusion: Apple has not done a stellar job explaining iCloud Drive, nor, for that matter, iCloud in general.

Part of the problem is that iCloud is not just one thing but a whole panoply of services, including calendar and contact storage and syncing, email, location services, media and app sharing, backup, data storage, document storage, and more. From time to time, Apple highlights one or more of these services in its marketing, usually when it is introduced or expanded, but to my knowledge the company has never provided a comprehensive guide to the entire beast. That’s one reason Joe Kissell’s “Take Control of iCloud” has been so successful (and yes, he’s working hard on an update that will be out shortly). As a result, we end up like the blind men in the story about the elephant, each of us thinking that iCloud is whatever part of the elephant that we have happened to have laid our hands upon.

iCloud Drive is one part of the iCloud elephant, but Apple has not gone to great lengths to explain which part of the beast it is, so it’s easy to think that iCloud Drive is a brand new animal. But it’s neither completely new nor its own animal. It’s simply a more mature form of an existing iCloud feature: Documents & Data.

Documents & Data — Before Apple introduced iCloud Drive, each iCloud-compatible app could have its own private storage space in a user’s iCloud account. Only that app could access that space and manipulate the files stored in it. Apple slapped the generic name “Documents & Data” on that capability when talking about it to users and exposing it in interfaces. Here’s how it worked.

If an iCloud-enabled iOS app (like, say, Pages or PDFpen) had a related Mac app that also used iCloud, the Mac app and the iOS app could both access the same private storage space and use the same files. This meant that you could create a file on your iPhone, save it in iCloud, and open it on your Mac or your iPad in the related app.

However, even on the Mac, you had to use the app to create, delete, or modify files in its private iCloud storage space; the Finder had no direct access to it. (Technically, you could delve deep inside your Home folder’s Library with the Finder and find the cached iCloud files, but those cached files inside your Mac’s Library were only local copies and not guaranteed to reflect the current “truth” — that is, the master file as it was stored in iCloud itself.)

iCloud Drive — On the Mac, iCloud Drive provides a Finder-accessible method for viewing, adding, and removing the documents that apps store in iCloud. In addition, it gives users a way to create their own folders in iCloud and put whatever documents they like in those folders. iCloud Drive appears as a choice in the Favorites sidebar of Finder windows and, when clicked, displays what looks very much like a normal list of folders. Looks, however, can deceive. 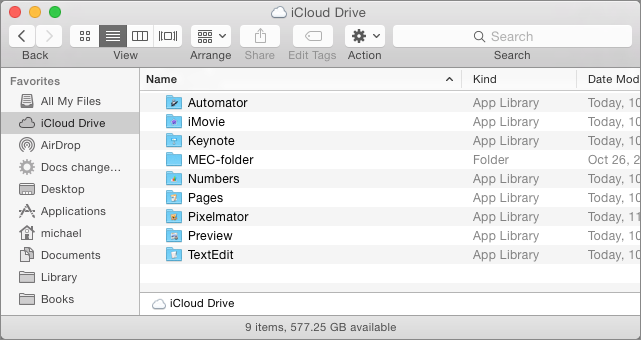 Many of the folders shown in iCloud Drive — in fact, all of them if you haven’t added any of your own — are not Finder-type folders at all but “app libraries.” These app libraries are how the formerly private document storage spaces for apps appear in iCloud Drive. They are still managed and maintained by the apps that own them, and what you can do with them is still largely dictated by individual apps. For example, some apps may restrict the kinds of documents you can put into their app libraries. You can’t even Get Info on an
app library “folder” in the Finder; File > Get Info is disabled, and if you try the Command-I shortcut, the Finder beeps at you.

In iOS 8, which has no Finder, iCloud Drive can be accessed from within iCloud-enabled apps — if, of course, the app’s developers provide that capability. In most cases, iCloud-enabled apps in iOS 8 display the iCloud documents they manage in much the same way that they did in earlier versions of iOS. 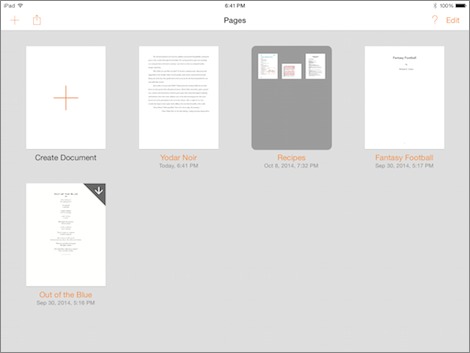 However, even when they display their documents in the same old way, apps can also provide a method for browsing iCloud Drive and opening compatible documents stored in other app libraries or user folders. For example, in Pages for iOS, tapping the + icon on the document manager toolbar can take you to the iCloud Drive “document picker,” from which you can open user folders and other apps’ libraries (for those apps that allow you; some libraries may be disabled or not even appear in the picker), and, from within those
libraries or folders, choose documents to open. 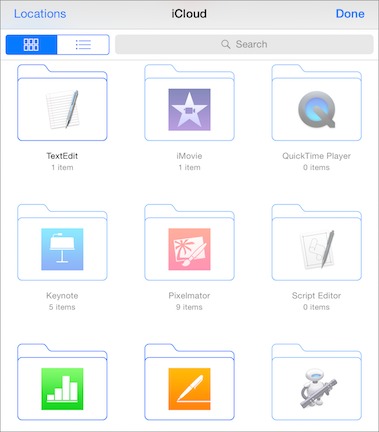 It’s hard to predict what an app will do when you open a document from another app’s app library or from an iCloud Drive folder. One app may make a copy and store it in its own app library; another may create an alias and store that in its app library.

For the most part, iCloud Drive simply gives you more control and convenience for managing the Documents part of the old Documents & Data service than previous versions of iOS and OS X offered. However, because it also allows you to make your own folders on iCloud Drive — even within some app libraries — and to store whatever documents you want in your folders, you can’t be blamed for thinking, “This here sure looks like I could replace Dropbox with it!” You would most likely be wrong, though.

iCloud Drive Isn’t a Dropbox Replacement — To begin with, Dropbox is far cheaper than iCloud: $99 per year for one terabyte of storage for Dropbox versus $19.99 per month (or $239.88 per year) for the same amount of iCloud storage.

But cost is just part of the reason: the two services also work differently. Take sharing, for instance. iCloud is generally all about sharing, but it’s mostly about sharing your stuff with your devices: that is, sharing the same stuff (calendars, music, mail, your budget in Numbers, and your half-finished novel in Pages) among all of your devices. Sharing stuff with other people, even other iCloud users, is not easy, and worse, the options are limited and tightly focused (such as specific photo streams or explicitly shared documents in Pages or Numbers).

Dropbox, on the other hand, lets you share folders and all the documents therein with other Dropbox users — this is how Take Control manuscripts are made available to authors and editors for writing, editing, and production. Doing the same thing with iCloud Drive would be impossible.

Furthermore, iCloud, unlike Dropbox, doesn’t store previous versions of a file (though some individual apps do), nor does it let you restore deleted files.

Most importantly, though, iCloud Drive is not just a file sharing service. Remember that apps on both Mac and iOS have a lot to say about what you can do with their app libraries. This means that the Finder, in order to create the illusion that iCloud Drive is just another drive with a bunch of folders and yet respect those individual apps’ rights and requirements concerning their own stuff, can behave unpredictably. You can’t tell by sight, for example, which app libraries will accept which files until you try them.

Also, at least in the initial release of Yosemite, the Finder can get confused when you do some seemingly normal file handling things within the confines of an app library, such as changing the name of an alias created by an iOS app. I have seen the Finder go into a spinning beachball mode from which it doesn’t recover when I have done that; other times I have seen the changed filename turn into a long string of letters and numbers. This is not the sort of behavior you want in a file sharing service.

For what it is — a better way to manage, access, and sync your documents stored in iCloud — iCloud Drive is a welcome enhancement.

But it isn’t Dropbox.

Comments About iCloud Drive Is Not a Dropbox Replacement