Microsoft raised eyebrows earlier this year when it released a full iPad version of its flagship Office productivity suite without providing comparable touch-friendly software for its own Windows platform (see “Office for iPad: A Deep Look,” 3 April 2014).

That trend continues in what has clearly become aggressively a cross-platform age for the once Windows-centric software company. Last week, Microsoft made a slew of Office-related announcements involving the iPhone, iPad, and Android, all while continuing to treat Windows as a bit of an afterthought (at least publicly).

Most surprising, many Office features are now available for free. This isn’t Steve Ballmer’s Microsoft anymore.

Office for iPhone — Perhaps the biggest Office news for Apple aficionados involves the iPhone. Microsoft released new and universal versions of Word, Excel, and PowerPoint that work on either the iPad or iPhone, with the latter tweaked for the iPhone’s smaller screen. 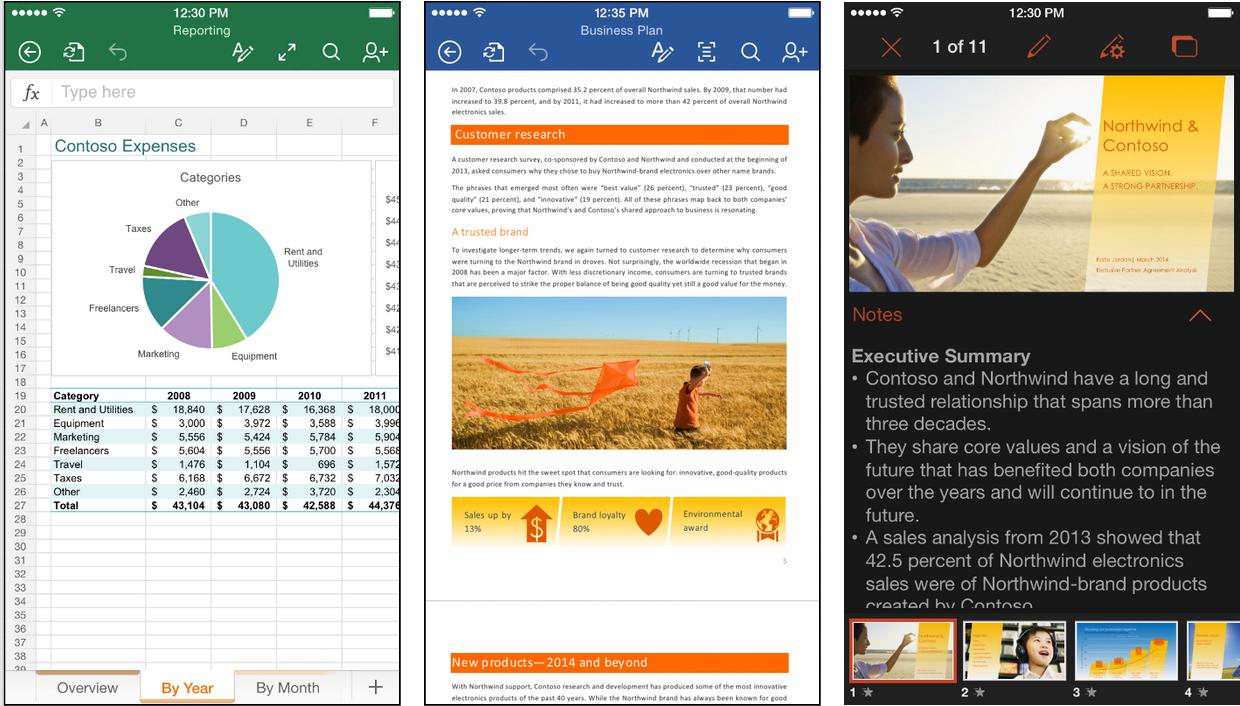 Word, for instance, makes the most of the iPhone’s limited screen real estate by revealing the formatting pane with the tap of a button. It slides up from the bottom and can be dismissed with another tap.

That formatting pane is nicely designed to save space. The traditional Insert, Layout, Review, and View menus, which are in a toolbar along the top on the iPad, live in a tidy popover on the iPhone. There are lots of controls in that formatting pane, but they’re a cinch to find with a quick scrolling motion.

Word users now have two viewing choices: the default view and one Microsoft calls an “easy-to-read layout” or “reflow view.” 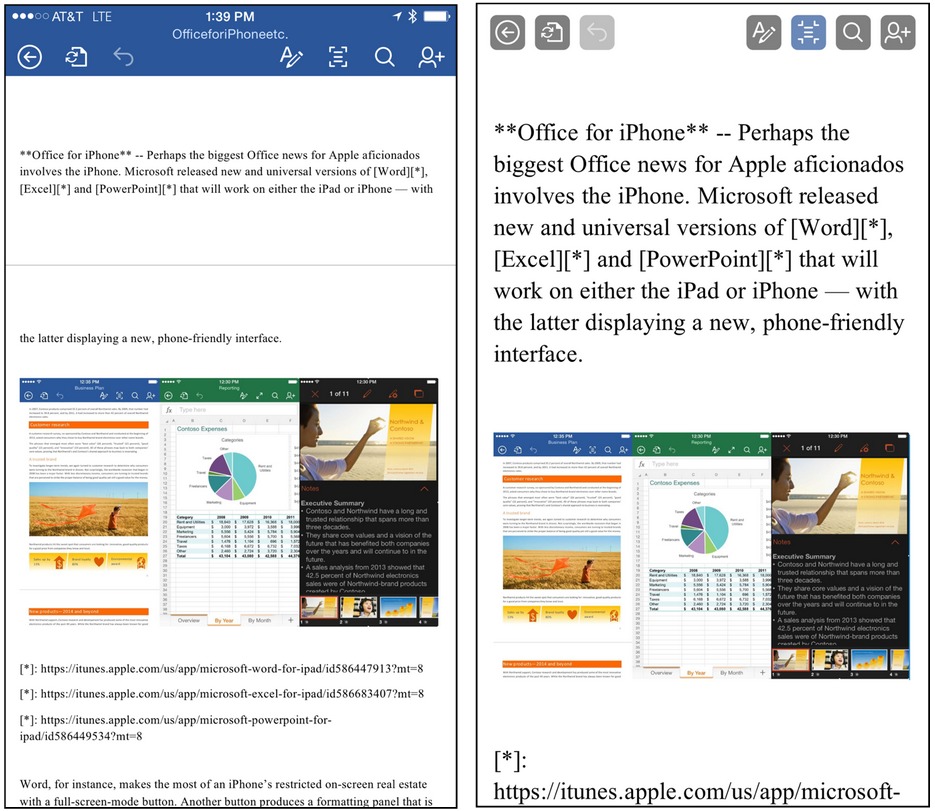 These new, standalone versions of Word, Excel, and PowerPoint for the iPhone replace a single Office Mobile app that iPhone users could use to open and edit Office files. Office Mobile had a limited feature set, didn’t have many fans, and won’t be missed.

Relatively minor feature upgrades apply to both iPhone and iPad. The Office apps have more-customizable charts, for instance (but only for paying premium users). PowerPoint also tweaks animations, theming, zooming, and background formatting. 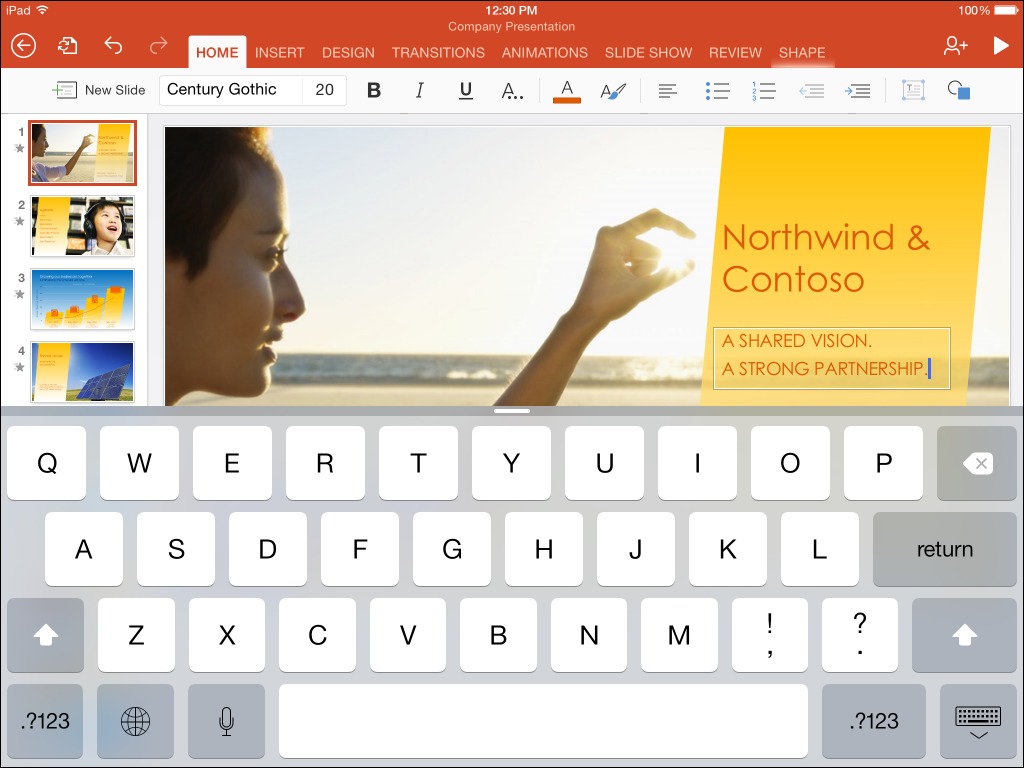 Microsoft did not announce updates to its OneNote apps for iPhone and iPad, but late last month it pushed out an update with iOS 8 support and optimized viewing on the iPhone 6 and iPhone 6 Plus. Those OneNote updates also added iCloud Drive support and improved security, including compatibility with Touch ID.

Editing for Free — Microsoft’s Office apps for iOS were previously of limited use to those without an Office 365 subscription because they could only open and display Office files — editing and saving wasn’t an option.

Now it is… up to a point. Microsoft has made core editing features in Word, Excel, and PowerPoint free for all users while keeping advanced, business-centric features as premium offerings for Office 365 users.

The new Office apps are now akin to certain iOS games that are technically free to play, but include in-app add-ons for those wanting the full experience. Want to level up? Pay up.

Average Office users might not feel much pressure to upgrade, though, since Microsoft has been generous in what can be done at the free level. I’m writing this article in Word on my iPhone 6 Plus without paying a dime (but I can’t sync my work with Word for the Mac for free).

Figuring out what’s possible in the free apps is a bit tricky, and some of the differences are silly. Only premium users can switch orientations in an existing Word document or create a document in portrait mode. Seriously? Macworld has a detailed rundown of free-versus-paid features. It would be nice to be able to purchase desired features à la carte, rather than having to pony up for Office 365 for just one or two paid features.

Microsoft’s move to make its Office apps essentially free is not much of a stretch when you consider it had already done so with robust browser-based versions of Word, Excel, and PowerPoint, along with OneNote.

Dropbox — Microsoft has expanded saving options, too — including added support for Dropbox. This comes courtesy of a new Dropbox-Microsoft alliance (see “Dropbox Is Coming to Office,” 4 November 2014). As a result, when I fired up the Office apps on my iPhone and logged into my Microsoft account, I was also prompted to connect to my Dropbox account. Naturally, you can still save documents to Microsoft OneDrive.

Dropbox and Microsoft are working to make their offerings more compatible. Other announced features include the option to edit Office files from within the Dropbox app, Dropbox integration with the Office Web apps, and the sharing of Dropbox links from Office, but these features did not appear to be fully active as of this writing.

Hello, Android — Microsoft had promised an Android version of Office, and that has now come to pass. Sort of.

The company has launched a preview program for early adopters who want to kick the tires on beta versions of Word, Excel, and PowerPoint for Android. You must register, but using the apps costs nothing. As of this writing, the preview is by invitation only.

The Android apps look extremely similar to the iPad versions, and are important for those individuals or companies who use a mix of mobile devices and want Office consistency across multiple platforms. Android users previously had only limited Office-like apps from third-party sources. Some such apps are nice, but for many companies only Microsoft’s official Office suite will do. 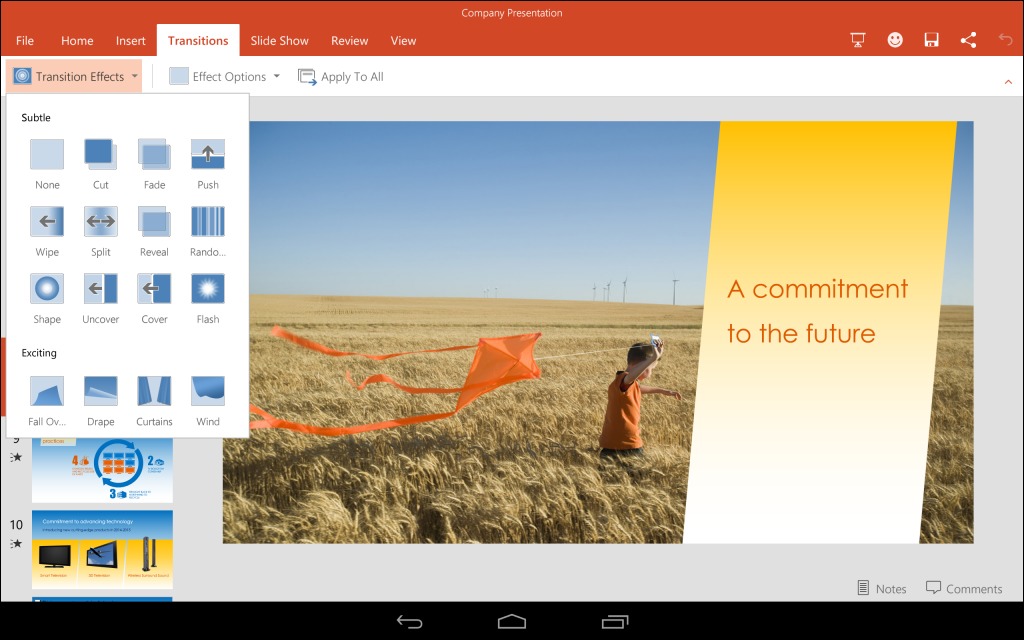 Poor Windows Users — Those on Windows PCs continue to suffer as they see iOS and Android enjoy the latest in Office goodness. I’m in that group, since I regularly rely on a Microsoft Surface tablet, and I dislike using the traditional versions of Office apps on a touchscreen.

Microsoft has said that touch-optimized Office apps for Windows will be released alongside the Windows 10 operating system, which is slated to ship late next year. No other details were forthcoming, but the company did post a screenshot of the upcoming PowerPoint. 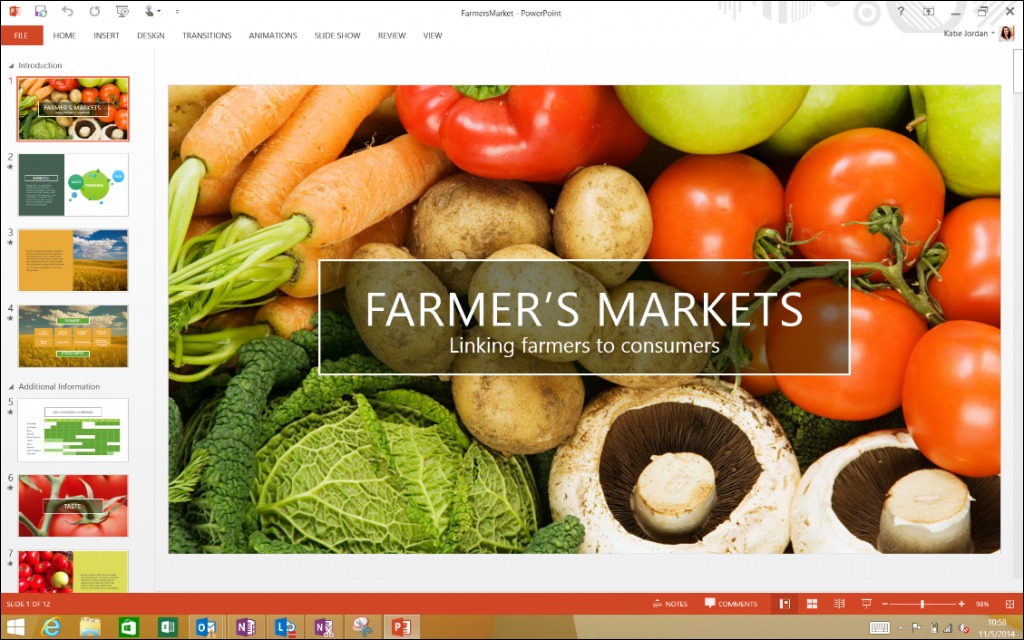 Comments About Microsoft Office Comes to the iPhone, and It’s Free