When it works, iMessage is one of Apple’s best online services. With iOS 8 and OS X 10.10 Yosemite, it seamlessly merges SMS and instant messaging across all your Apple devices, and you won’t find better security in a mainstream messaging app. (No, really! See “EFF: Apple Offers Best Mainstream Messaging Security,” 7 November 2014.)

But if you decide to switch away from the iPhone to any other type of mobile phone that uses SMS text messages instead, iMessage can become a Kafka-esque nightmare. That’s because messages sent to your phone number from your Apple device–using “blue bubble” friends would still go through iMessage and into the void, unless you had disabled iMessage in Settings > Messages on your iPhone. Previously, if you forgot to disable iMessage before getting rid of your iPhone, you were in for long phone calls to Apple to remedy the situation.

Apple has finally released an online tool to disengage your phone number from iMessage (a class action lawsuit might have encouraged its creation). Visit the page, enter your phone number to receive a confirmation code, and then enter that code on the site. 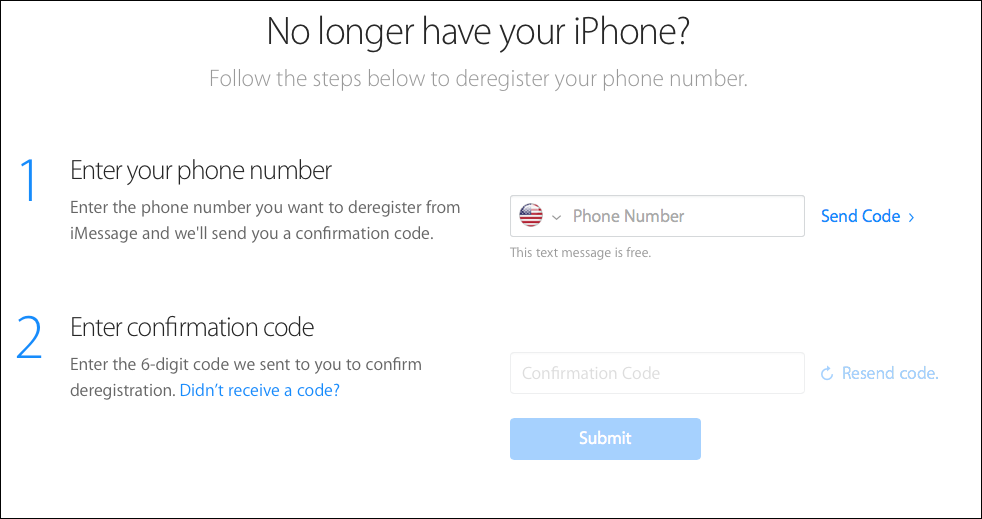 While it’s good that Apple has released a tool to deregister a phone number from iMessage, it’s infuriating that it took so long. Granted, Apple doesn’t have much incentive to help customers switch to a competing platform, but to paraphrase a common saying, “If you want a loyal customer, let them go. If you truly make the best product, they will return.”

Networking Problem Solving
Cookies & Privacy: We wish we were talking about chocolate-chip cookies here, but our Web site—like nearly all others—relies on a few minor digital cookies. Various laws around the world require us to tell you that fact, so consider yourself informed, if not nourished. By continuing to use this site, you agree to our use of these cookies. Cookie and Privacy Notice