Standing desks are all the rage. As I look across my day-job workplace at the St. Paul Pioneer Press, I see more and more of my coworkers on their feet as they peck at their PCs.

Standing for significant portions of a workday — or, rather, not sitting — is said to have major health benefits. Most of my colleagues accomplish this via standing desks, which are workstations that can be readily raised and lowered with cranks for use while in a chair or standing up, as they see fit.

The main problem with standing desks, however, is cost. They can be pricey purchases, routinely exceeding $1,000, and running double or triple that in some cases — especially for fancier models with motorized adjustability and other exotic features.

Of course, you can build a standing desk for little or no money — Lifehacker has covered a number of these projects. But for a professional alternative that’s less expensive than a full standing desk, look into adjustable work platforms that clamp onto the edges of desks or tables to create the equivalent of a standing desk.

Ergotron, a company in my Minnesota neck of the woods, offers a variety of clamp-on platforms. Ergotron got my attention recently with a line of “WorkFit” products marketed specifically to Macintosh users and made of anodized aluminum to match the appearance of modern day Macs. The firm even created an Apple-centric page to entice the Mac crowd, though the products on that page can be used by other computer users. The online Apple Store also carries the Ergotron products.

One of Ergotron’s Apple-flavored products, the WorkFit-A, is an elaborate contraption designed to accommodate an iMac while adding a keyboard-and-mouse surface, along with a separate platform for paper, iPhones, iPads and the like — all suspended by an articulating arm that looks like something out of a James Cameron movie. 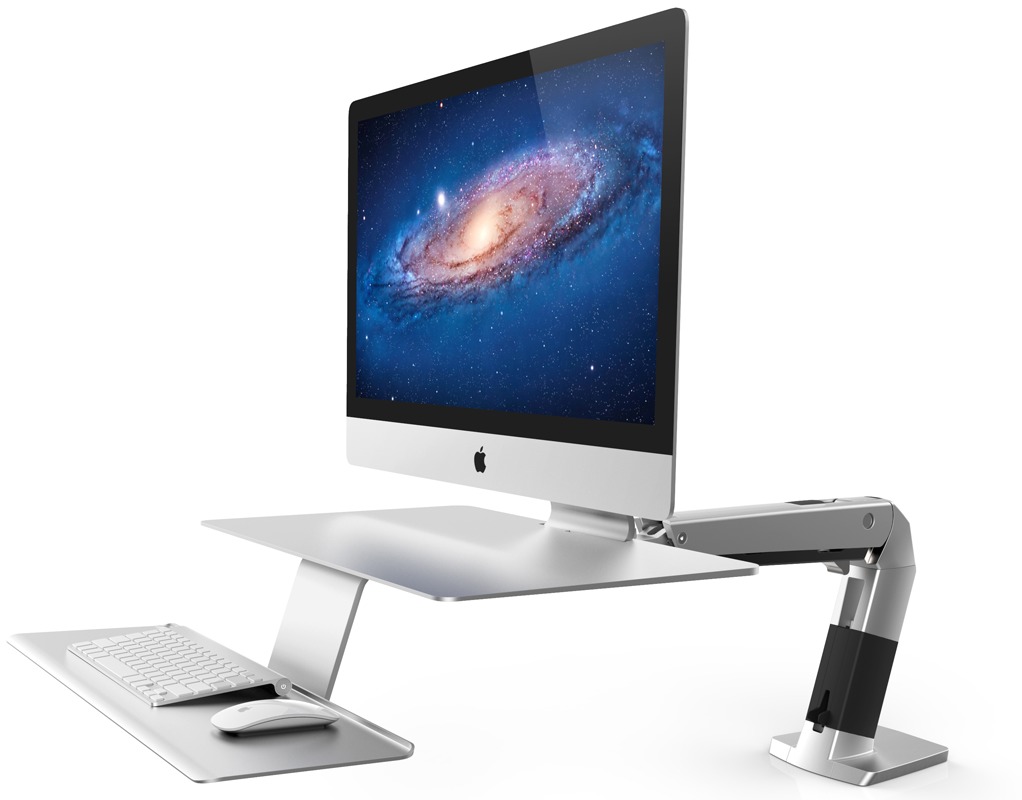 The other product in Ergotron’s Apple-flavored line, the WorkFit-P, is simpler: it’s just a laptop tray held in the air with a smaller version of that “Terminator” appendage. 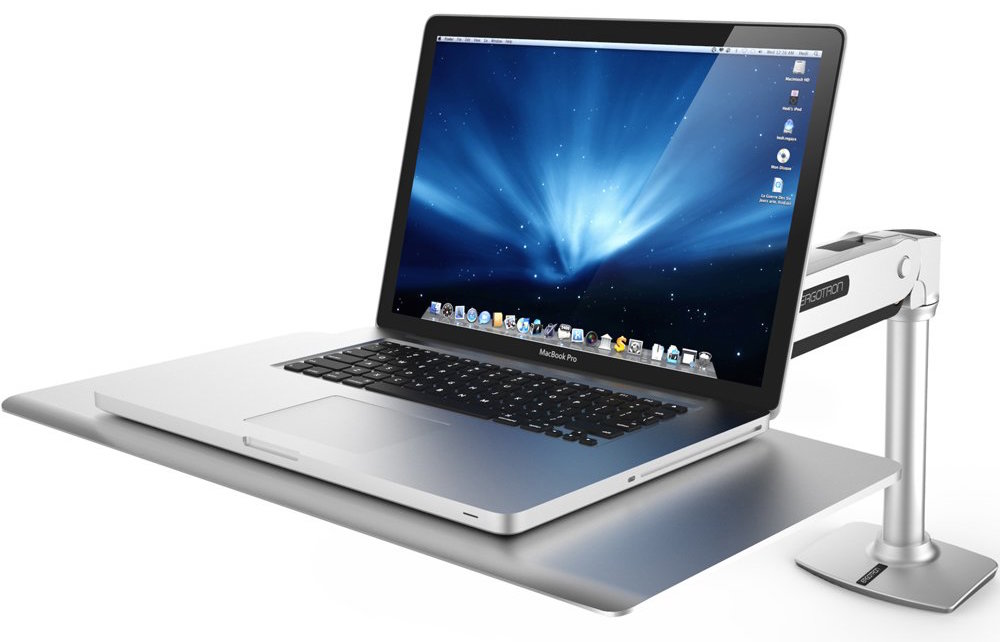 I was instantaneously skeptical of these products. I couldn’t see how they could be as stable as my colleagues’ sturdy and all-but-immovable standing desks. Sure enough, when Ergotron sent me samples to try, I found shaking and wobbling to be a problem with both stands, as I had expected. The WorkFit-A is the most problematic.

For some users, this could be a deal-breaker, but my sources at Ergotron told me that its customers grow accustomed to the wobbliness and adapt quickly. I became quite productive on the workstations after an adjustment period, but I still prefer typing on a firm, anchored surface.

WorkFit-A — This thing is a beast. Assembly is a bit of an undertaking, as well, so I had an Ergotron staffer help me with that. (Thanks, Steve!) We clamped the WorkFit-A onto the back edge of a computer workstation in my office.

I used my $579 test station with Apple’s new iMac with Retina 5K display, a 27-inch model that is identical in shape and size to older 27-inch iMacs. The WorkFit-A can also accommodate 21-inch iMacs. As part of the assembly, the iMac is clamped firmly to the top of the workstation so there’s little chance of it falling off, something I initially worried about and can see being especially concerning to anyone living in earthquake country.

A deck for papers and an iPhone sits below the iMac surface. Below that, via a metal extender, is the keyboard-and-mouse tray. 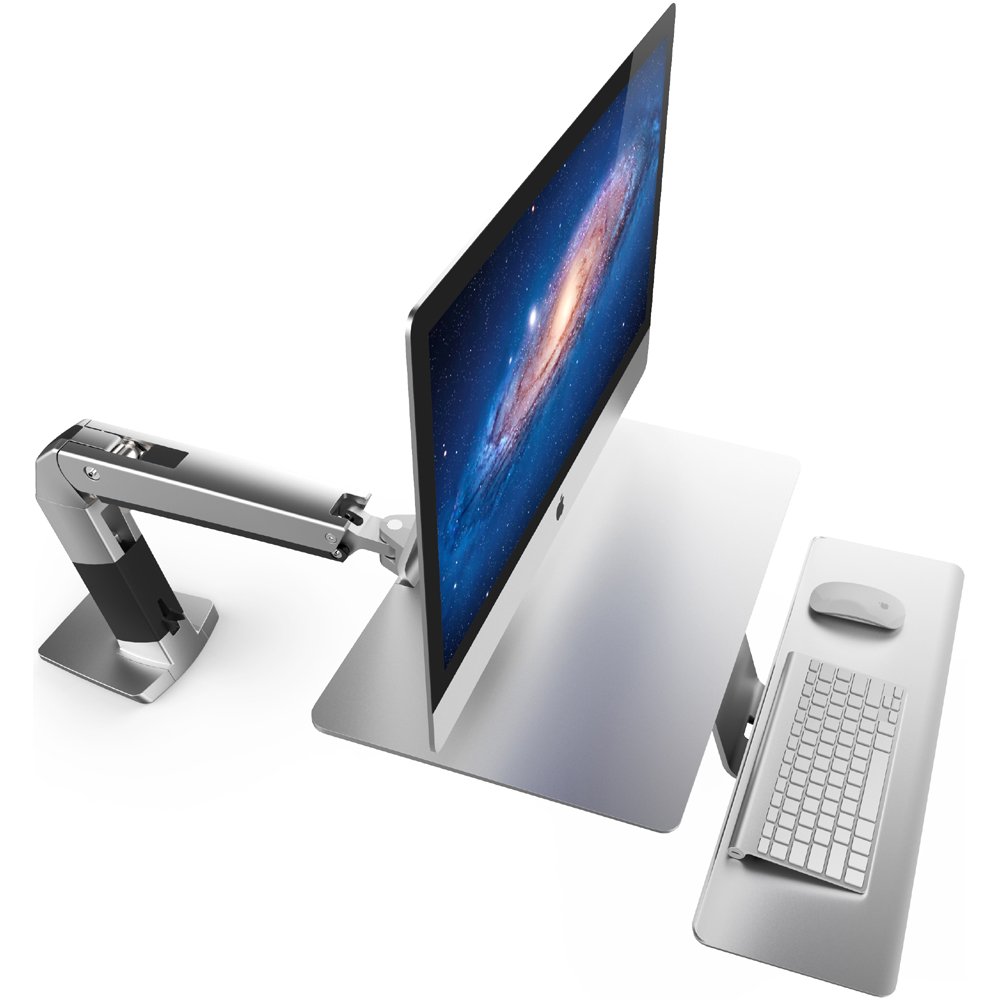 As I started to work on my Frankenstand, I immediately noticed a few potential problems.

The heavy-duty adjustable arm stays in place where you leave it, but the arrangement is marred by a bit of side-to-side and up-and-down wobble that makes the computer seem to be nodding slyly at you. This is to a large extent a Mac and not Ergotron problem: friction where the iMac screen and stand meet is not great enough to prevent movement.

Ergotron has an accessory intended to keep the iMac from moving as much. The company doesn’t advertise it, but sends it out for free upon request; contact Ergotron and ask for part number 97-834-085.

WorkFit product manager Neil Lien said it “adds friction to the tilt on the iMac monitor.” Unfortunately, I couldn’t get the thing to work with the Retina iMac, apparently due to a subtle change in the Mac’s design that may require Ergotron to update the plastic piece.

Positioning is another potential issue. When sitting or standing at this workstation, I found the iMac to be a bit too close to my face for comfort. This might be fine for others. Indeed, the screen was about an arm’s length away as I worked, which is what some recommend, but I personally found the huge and bright iMac to be uncomfortably prominent as positioned. My point here: the fact that this can’t be adjusted to account for different tastes is a problem. 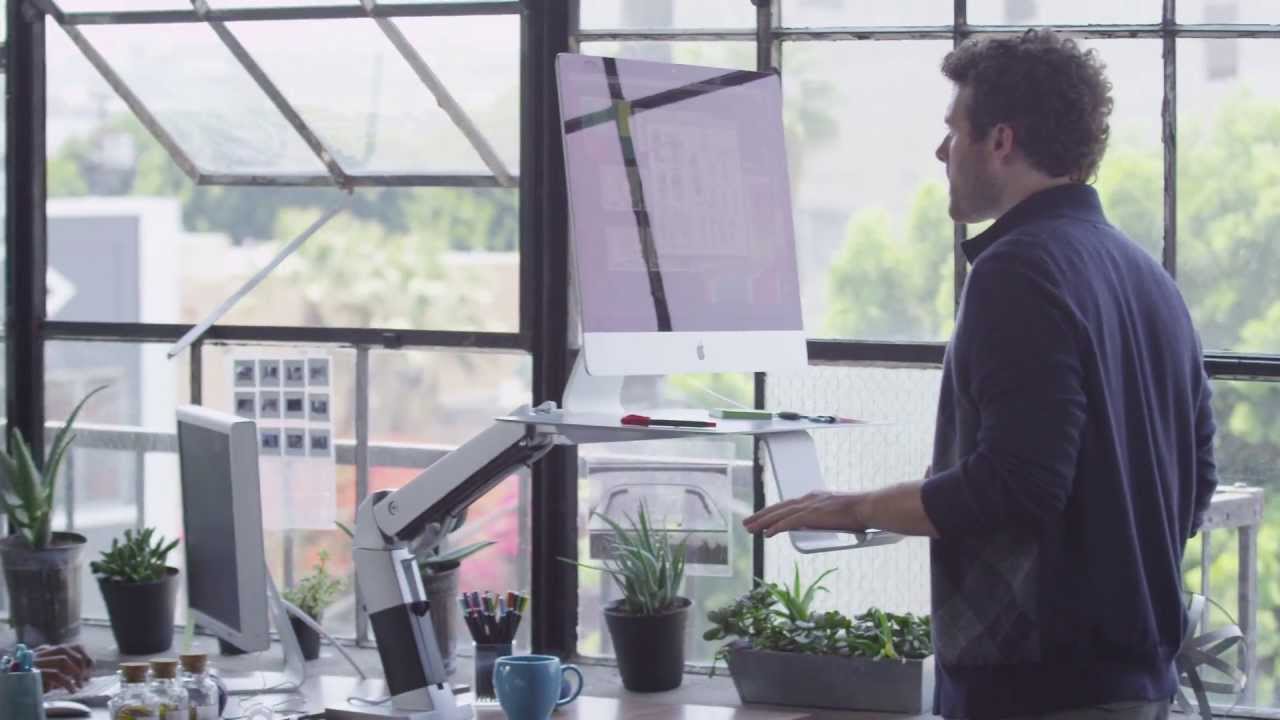 I could tolerate the screen closeness when working on my feet, but when I lowered it so I could sit down, the iMac also was a bit too high. This, also, is not adjustable. There is no way to modify the display and keyboard height independently; changing one changes the other since all parts of the station rise and descend in unison. 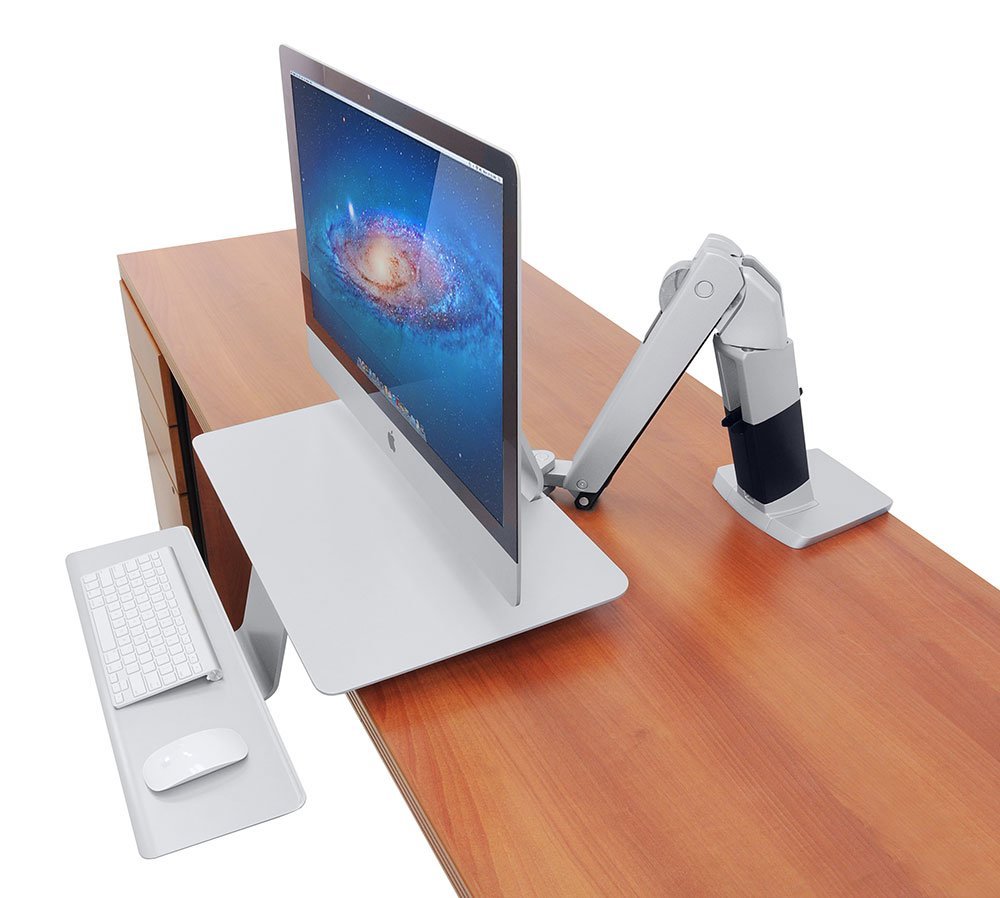 The keyboard tray has issues, too. Width is a minor one: you will be fine if you use an Apple Wireless Keyboard with a mouse, but you will feel cramped with a wider keyboard that has a numeric keypad.

Depth is a bigger problem — I didn’t have adequate mouse-maneuvering room, and I kept banging my rodent into the raised lip on the far edge of the tray. 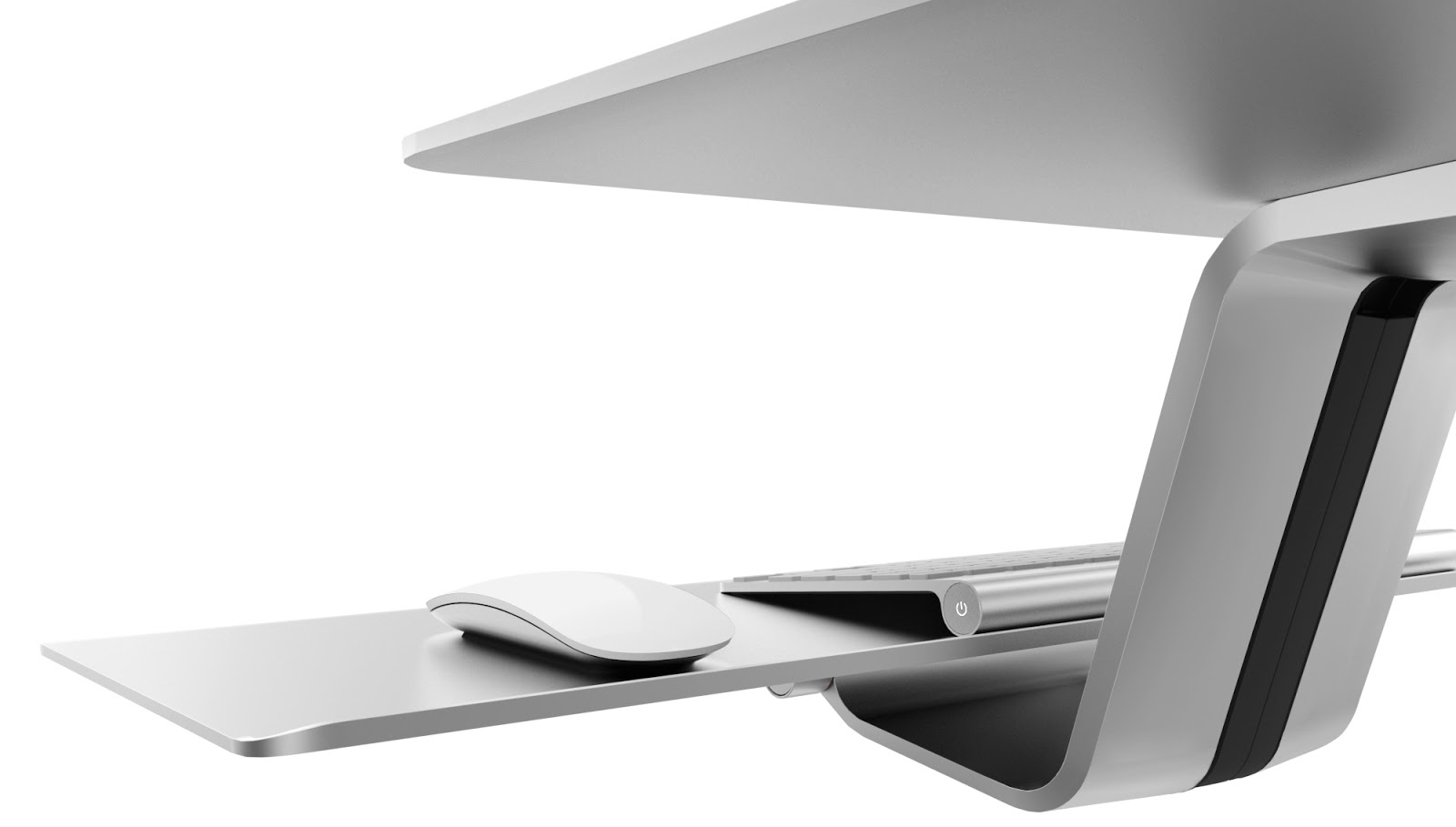 The keyboard tray also sported a superficial imperfection that seemed trivial, yet marred its smoothness enough to make mousing over that portion of the surface stress-inducing. Think of it as a princess-and-pea problem.

Switching to Apple’s Magic Trackpad would resolve all of my issues with the tray, but it’s not my favorite input device.

Don’t even think about investing in the WorkFit-A unless you have a super-sturdy desk or table. I initially clamped it onto a smaller typing stand that was not up to the job, creating additional wobble.

On the positive side, both its Terminator arm and the computer/keyboard combo can be rotated to the left or right if you want to share something onscreen with a colleague, or just move the whole workstation out of the way temporarily.

The WorkFit-A is a real conversation starter, too. Many who run into it will have never seen anything quite like it, making you Mr. or Ms. Popularity, at least for a while.

But you must give careful consideration to whether the WorkFit-A design will suit you given the potential problems I’ve detailed. Again, it could be just the ticket for certain iMac users, but I decided it definitely wasn’t for me.

WorkFit-P — I’m more enthusiastic about the simpler WorkFit-P, precisely because it’s simpler. It’s a minimalist apparatus for those who want to work on their laptops while on their feet, and it is splendidly, if not perfectly, designed for this purpose. At $299, it’s a bargain for what you get.

Like the WorkFit-A, the WorkFit-P clamps onto the far edge of a working platform and suspends its tray over that surface so that a notebook computer can be placed upon it for work sessions. It’s intended for users of Apple laptops, but there’s no reason you couldn’t use a Chromebook or a Surface Pro 3 instead of a MacBook Air.

The WorkFit-P is simpler to assemble, and I was able to pull it off on my own despite my legendary ineptness with tools.

Once properly affixed to my desk, the WorkFit-P provided a sufficiently stable surface for work sessions. It’s certainly no substitute for a rock-stable standing desk, and I experienced a bit of jiggle, but it was not bad. Given the convenience of leaping to my feet, placing my laptop on the tray, adjusting its height and getting right to work, I was willing to tolerate a bit of instability. After a while, I barely noticed it. 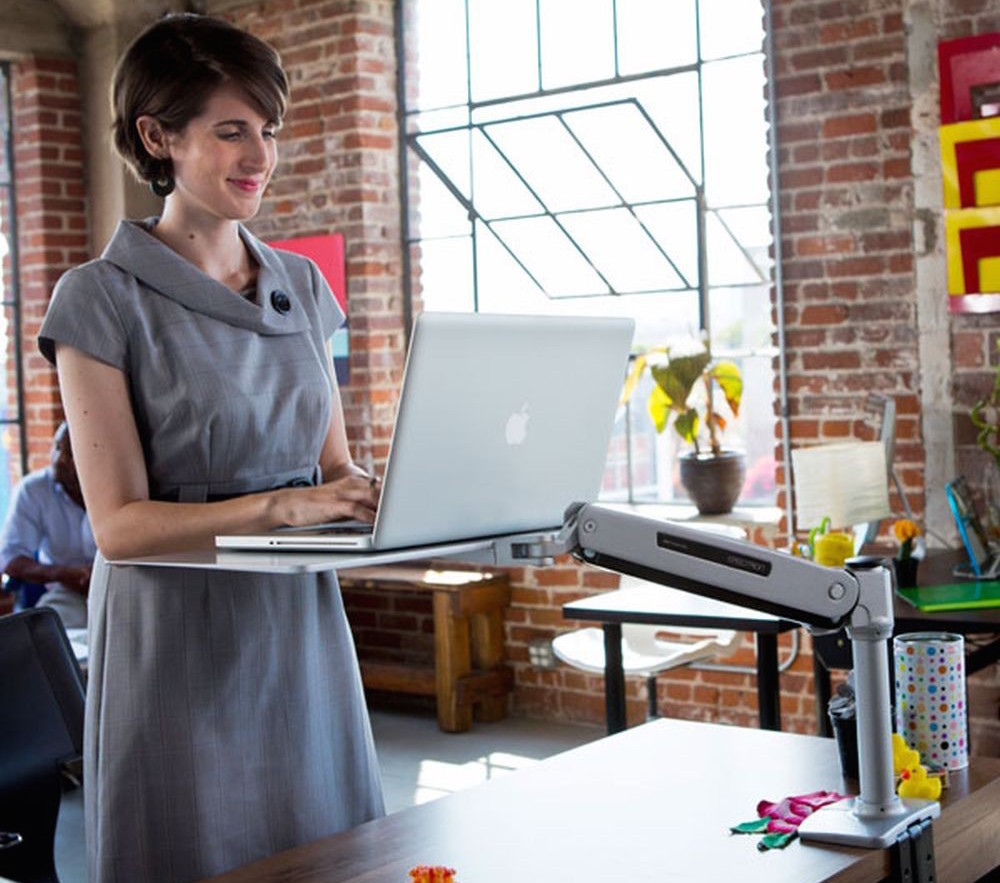 The WorkFit-P didn’t work as well for me as a sitting work surface. When lowered, it was too far back on my desk to reach comfortably — your mileage may vary depending on how deep your desk or table is. But this is a minor issue, since I simply removed the laptop from the stand and then pushed the stand out of the way. 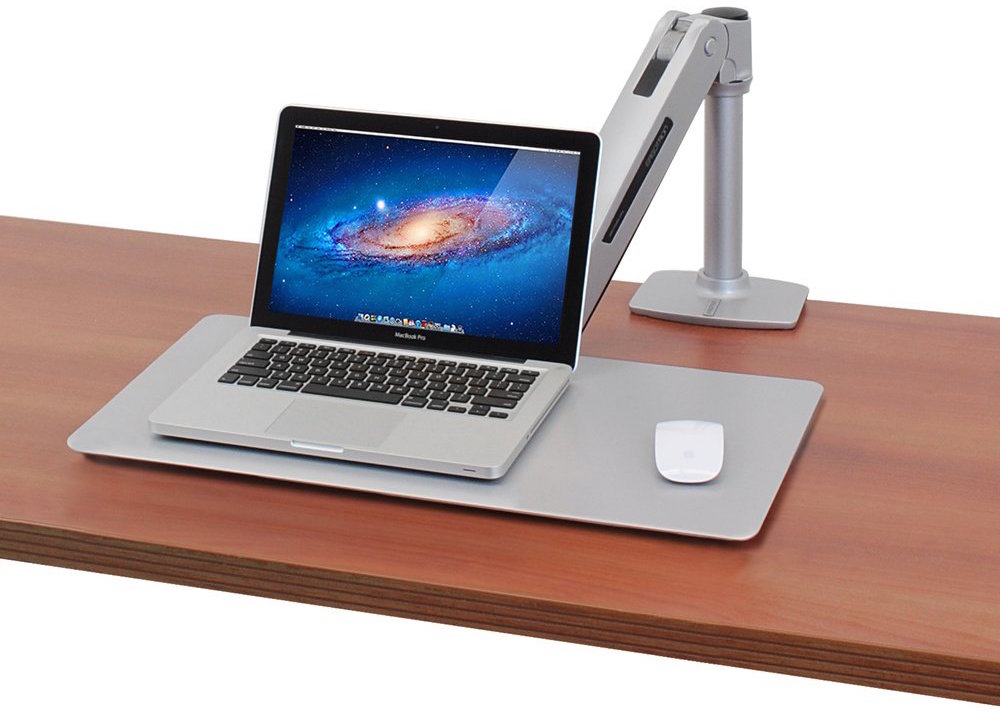 It’s important to note that working directly on a laptop for lengthy periods is not the most ergonomic arrangement, and though the WorkFit-P does ameliorate this somewhat, the screen and keyboard are clumped too close together. This is an issue for some, though it doesn’t bother me.

Variations — Ergotron’s Apple page also includes a WorkFit-A variation, called WorkFit-A with VESA Mount ($599), for those using external monitors (or special-order iMacs). The monitor (or iMac) attaches to a metal stand resembling that of an iMac via the VESA Flat Display Mounting Interface (also known as the Mounting Interface Standard).

Ergotron has a separate product line, without the Apple aluminum look, called the WorkFit-S ($399), also with a VESA mount, although with an accessory Notebook Tray, it can hold a laptop instead of a monitor. One such workstation is shown in the picture below. 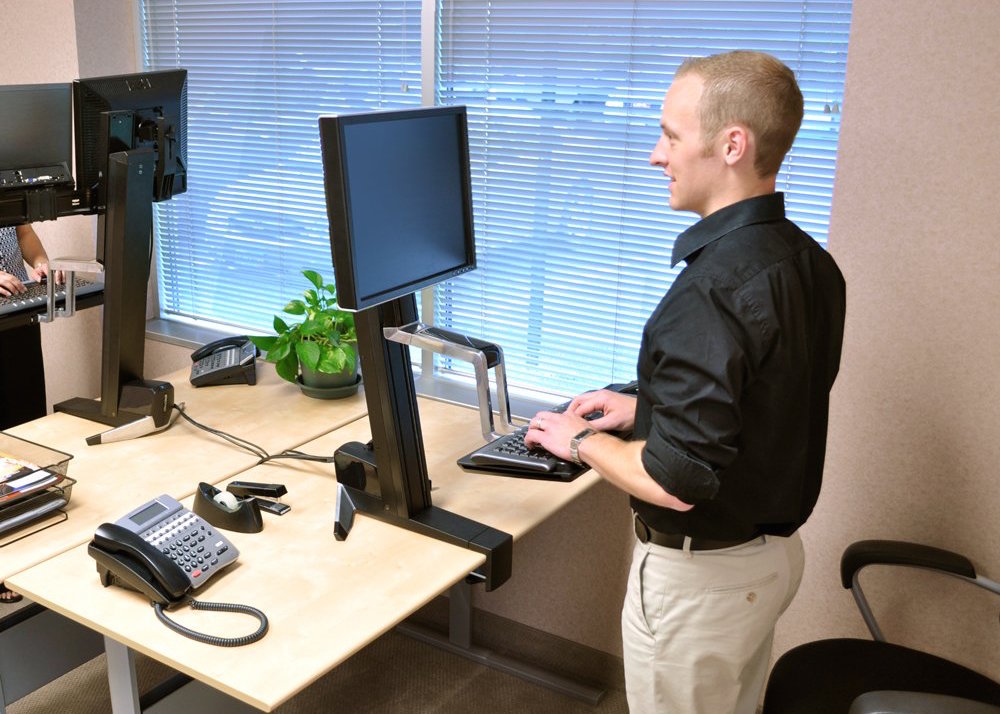 The WorkFit-S design differs from the others in that it clamps onto the front edge of a work surface, essentially grafting a vertical stalk onto the front of a desk with the screen placed at an optimal height and the keyboard on a tray; the whole shebang slides up and down on a track.

I tested one of these workstations a few years ago and did not like how I lost the bulk of my desk to it. But I found it to be a solid-feeling setup since it has no articulating appendages, and it’s easy to alternate between sitting and standing positions.

Bottom Line — I never grew comfortable with using an iMac on the WorkFit-A, though I hesitate to dismiss it out of hand based on my personal predilections. Since it’s just one version in the WorkFit-A line, with options for those using different varieties of computers, you might find something that works well for you.

I loved the WorkFit-P and definitely think that laptop users should consider it.

For those who have an external display (or a notebook with the extra Notebook Tray), the WorkFit-S might work out well if you can make peace with its weird desk positioning.

One additional thing to keep in mind about Ergotron: If their standard setups do not suit you, they can work with you to create a different one that meets your needs. A central WorkFit page shows multiple variations of each of the above workstations. The custom variations can accommodate a multiple monitor setup, or the combination of a laptop and external display.

That in itself is pretty cool — no Apple flavoring required.