Firefox 34.0 — Mozilla has updated its Firefox Web browser to version 34.0.5 with the addition of the new Firefox Hello communication client (which is still in beta). The Skype-like, Web real-time communication (WebRTC) feature enables you to make voice and video calls without having to set up an account (though signing up for a Firefox account provides one-click calling), and calls work with any WebRTC-enabled browser such as Chrome and Opera (but not Safari). To initiate a call, click the Hello icon
in the Firefox menu (the three-lined “hamburger” button at the far right side of the toolbar), and then send the generated link to a contact. (If the Hello icon is not immediately visible, click the Firefox menu button, click Customize, and drag the icon from Additional Tools and Features to the Firefox menu tray.) The update also adds the capability to use Yahoo as your default search engine, changes the default search engine for Belarusian, Kazakh, and Russian locales to Yandex, and uses HTTPS for secure searching of Wikipedia. (Free, 68.6 MB, release notes, 10.6+) 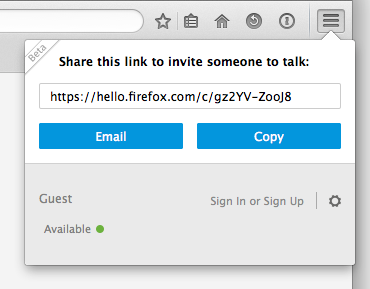 Boom 2.0 — Global Delight has released Boom 2.0, a major new release for the volume booster and equalizer app (see “FunBITS: Boom for Mac Pumps up the Volume,” 18 April 2014). Rebuilt to complement OS X 10.10 Yosemite, Boom sports a new look that plays well with both standard mode and Dark Mode in Yosemite and is engineered to take advantage of 64-bit processors to deliver smoother performance. The equalizer has been improved with precise Frequency Constrain controls that enable you to adjust minute aspects of bass, mid, and treble frequency bands. Boom 2.0 also adds
one-click audio effects (Ambience for a surround sound effect and Fidelity for crisper, sharper tones), intelligently improves file audio boosting, and customizes the sound output according to your Mac model. Boom 2.0 is priced at $14.99 for a single-user license that’s valid for use on two Macs. If you have a Boom 1.x license purchased from the Global Delight Web site, you are eligible for a 50 percent discount. If you purchased Boom 1.x from the Mac App Store, you can email Global Delight with your Mac App Store sales receipt to receive the upgrade price from the Global Delight site (details on this support page). At this time, Boom 2.0
is not available on the Mac App Store, but Global Delight is preparing to submit it in the coming weeks. ($14.99 new from Global Delight with a 25 percent discount for TidBITS members, free update, 5.0 MB, release notes, 10.10+)

Downcast 1.1.5 — Jamawkinaw Enterprises has released Downcast 1.1.3, a maintenance release that fixes several niggling problems while enhancing performance of all lists and context menus. The podcatcher app fixes several crashes (including crashes on OS X 10.8 Mountain Lion that occurred after displaying a sheet window), restoration of the main window in 10.10 Yosemite, a bug that led to an empty podcast after certain iCloud operations, and an issue that caused high CPU usage related to scoped bookmarks. Quick 1.1.4 and 1.1.5 updates resolve a number of newly introduced bugs, although Apple has not yet approved the 1.1.5 update.
($4.99 new from the Mac App Store, free update, 20.6 MB, release notes, 10.8+)

Lightroom 5.7 — Adobe has released Lightroom 5.7, which adds an integrated utility that imports images from Apple’s Aperture and iPhoto libraries (previously, this utility was available as a separate downloadable plug-in). The professional photo cataloging and editing application also displays a more prominent share button on synced collections, syncs comments and likes left on the Lightroom Web site to the Lightroom desktop catalog (and displays a badge on images with unread comments), fixes an issue that prevented Lightroom from reading Photoshop Elements 13 libraries, returns the context menu to
images contained in Lightroom mobile collections, and fixes a crash when rapidly adding corrections with the Spot Removal tool. Lightroom is offered via Adobe’s Creative Cloud app subscription scheme, and you can get both Lightroom and Photoshop with the Creative Cloud Photography plan for $9.99 a month ($119.88 annually). It can also be purchased as a standalone app for $149, and a free 30-day trial is available for those with an Adobe ID. ($9.99 monthly subscription, free update for subscribers, 528 MB, release notes, 10.7+)

Carbon Copy Cloner 4.0.3 — Bombich Software has released Carbon Copy Cloner 4.0.3 (CCC), which offers numerous fixes for issues related to OS X 10.10 Yosemite. The backup utility works around bugs related to Yosemite’s Service Management daemon, works around an issue that caused Yosemite’s Finder to continue to display disk image volumes after CCC had successfully unmounted them, and squashes a bug that prevented power management options from being respected. The update also adds a new scheduling selector option that provides more control over the handling of a task when a source or destination is missing, obtains a sleep assertion
that will keep the system awake during Dark Wake, and fixes a crash that occurred due to a slow network volume. ($39.99 new, $19.99 upgrade from version 3.5.x, 11.1 MB, release notes, 10.8+)

PopChar X 7.0 — Ergonis Software has released PopChar X 7.0, a major new release for the character discovery utility that adds a new Shape Finder feature. Simply draw the approximate shape of a character to display all characters that resemble that shape, helping you find characters easily when you don’t have the Unicode name at your fingertips.

The Shape Finder also works with the new Find Similar Shape contextual command, which enables you to right-click a character in the table and then add more strokes to it to find similar characters. PopChar X 7.0 also adds a new font filter for limiting the font list to fonts that match a given substring, enables you to export and import favorite characters to and from a text file, improves the appearance in OS X 10.10 Yosemite, makes it easier to resize the PopChar X window from the corners, and fixes internal
issues that could lead to increased memory usage over time. PopChar X now requires 10.6 Snow Leopard or later. Single-user and family pack license holders can upgrade to version 7 for €14.99 and €22.99 respectively. If you purchased PopChar X 6 on or after 1 March 2014, you are eligible for a free upgrade. (€29.99 new with a 25 percent discount for TidBITS members, free update, 3.8 MB, release notes, 10.6+)