Screencasting is not a new concept: as soon as people figured out how to focus a camera on a monitor to explain something, they did. You could argue that Douglas Engelbart’s famous 1968 demonstration of a graphical user interface and a mouse pointer is one of the earliest examples. ScreenFlow 5 from Telestream is the latest release of a long-running screencast app that adds some significant new capabilities for recording and editing walkthroughs or demonstrations, even if yours isn’t destined to be remembered forever. Sometimes, a bit of video can save dozens of email messages or
hours on the phone.

ScreenFlow’s goal is to let you record any audio input, video source, or screen connected to your Mac. In version 5, Telestream tapped into a new feature of iOS 8 and OS X 10.10 Yosemite that allows capturing the screen of any USB-connected iOS device on a Mac (this is possible without ScreenFlow too; see “How to Capture iOS Device Video in Yosemite,” 31 October 2014). Apple ostensibly added this option for developers who want to add video to their App Store listings, but it’s available to everyone. You can also natively import video into ScreenFlow from high-end cameras in MPEG Transport Stream and AVCHD file
formats.

But ScreenFlow isn’t just a capture aid. Its core is a track-based editor that enables you to create extremely sophisticated demonstrations. It resembles iMovie — before the HD version that changed everything (see “Regain the Timeline in iMovie ’11,” 21 October 2010). ScreenFlow has a steep ticket to entry for casual users at $99. But given that its intended audience is tech support technicians, technical writers, and folks like us at TidBITS, Telestream can charge a professional price. (Owners of any previous version can upgrade for $34. If you bought a previous version on the Mac App Store, you can transfer your
license to obtain an upgrade.) 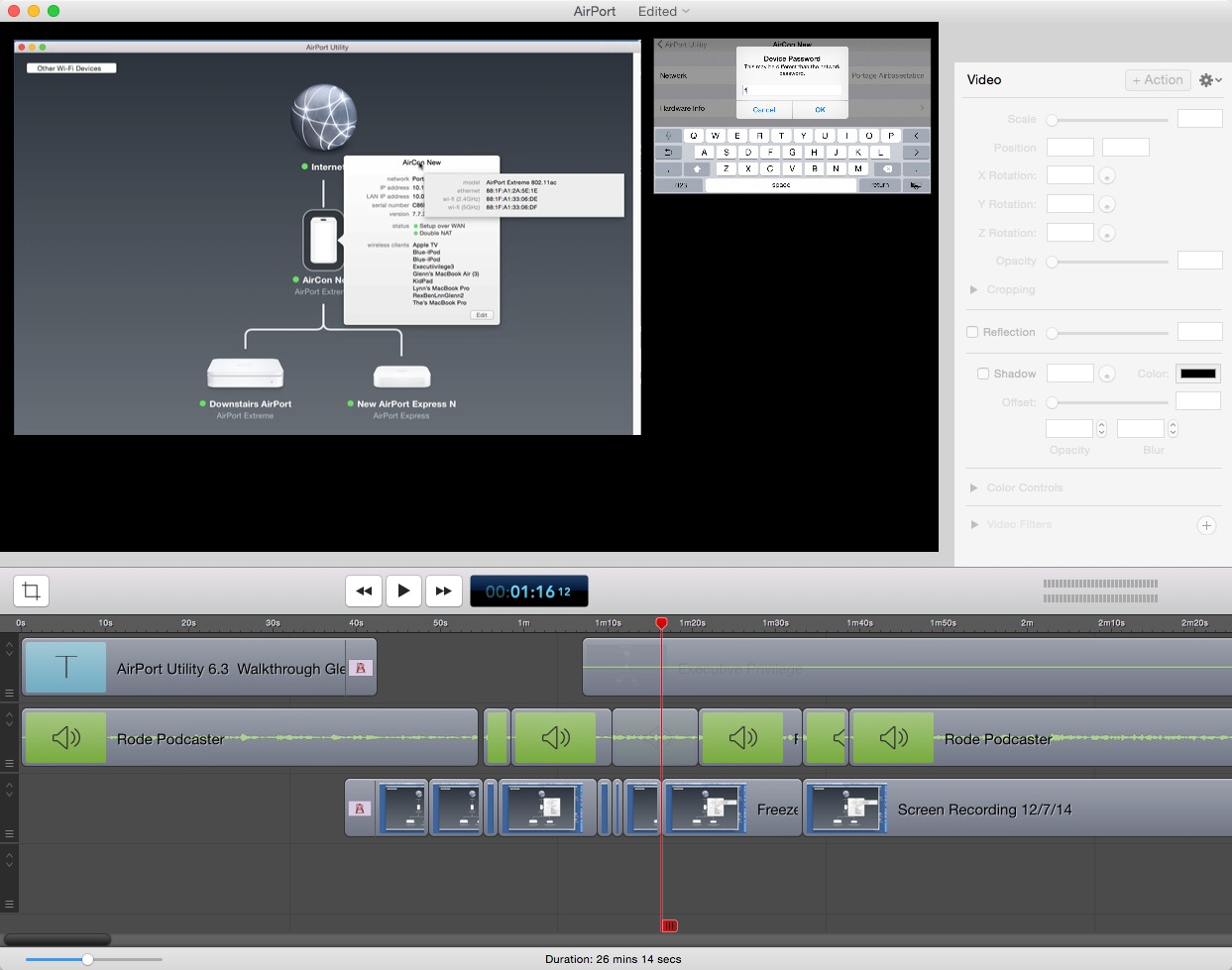 Using ScreenFlow starts with a new recording. The dialog lets you simultaneously capture any or all of five kinds of sources: the desktop (only one monitor at a time), an iOS device, FaceTime camera or other attached video source, an internal or external microphone, and system audio. Each source is recorded as a separate track that can be edited later. You can also import external video or add additional recordings to the document after the initial capture. Version 5 adds an iTunes and iPhoto media browser so you can
easily import previously recorded clips, as well as audio, music, and still images. 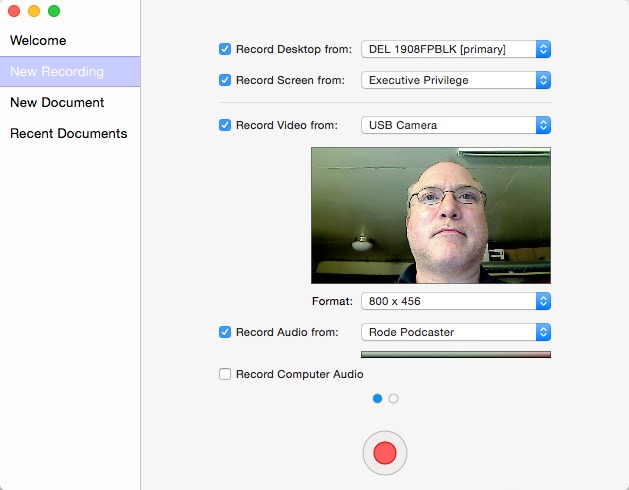 ScreenFlow’s editing environment lets you position, resize, and crop any source within the document frame. You can crop a screen to just an application window, for instance, or you can combine multiple inputs at once. Video or screencast elements can be rotated across three axes, which lets you simulate iChat Theater-style presentations with a video off to the side at an angle. 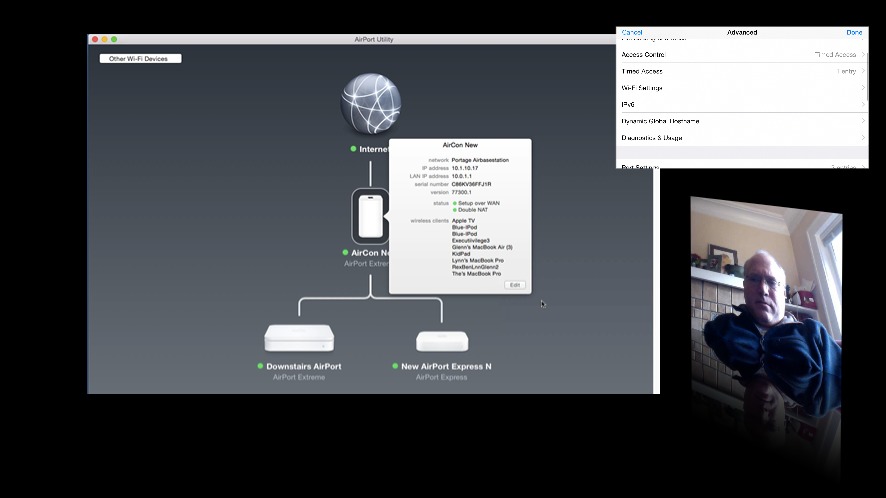 You can modify the video frame to any dimensions, or use standard ones, which include a variety of iOS capture options. This is particularly useful for App Store developers to be sure they fit within Apple’s requirements; ScreenFlow includes a special preview mode to check videos in that format before uploading. 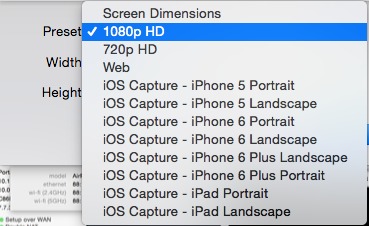 Outside of the canvas on which you lay out visual inputs, ScreenFlow behaves almost entirely like a video-editing program. A main timeline shows tracks, and you can scrub a playhead across the timeline or click to a position to see a rendered preview and hear bits of audio, or click the play button to watch a real-time composite. You can add titles, trim and split tracks, and add audio and video effects. (If you were really a masochist, you could edit videos without any screen recordings at all, but
I’d recommend against that! Choose the right tool for the job.)

ScreenFlow offers some appreciated, demonstration-specific features that enable you to call out, annotate, or put the focus on items. An Annotation Clip lets you draw with lines, rectangles, and ellipses on the video screen as if it were a separate video track.

A Callout Action in a visual track can highlight areas. For a screen captured from a Mac, you can have focus automatically switch to the current foreground window; ScreenFlow retains the window geometry in its captures. It can also follow a mouse cursor. A Freehand option to draw a static callout works in screen captures, as well as in iOS and other visual tracks. Callouts can be zoomed, be partially opaque, and have other effects. It’s a great way to isolate elements.

Because the iOS display capture method that Apple provides doesn’t grab gestures, you have to recreate them in ScreenFlow. The Touch Callout offers many subtleties, enabling you to make any sort of single or multi-finger gesture and movement, specify start and end locations, and even set whether the movement is linear or eases slowly in, out, or both. The app comes with several macros (or “templates” as it calls them) for common touch gestures.

ScreenFlow 5 has a non-trivial learning curve. I’ve used previous versions to produce a number of screencasts, and after re-acquainting myself with it, I’m still feeling only modestly proficient a few hours in. I’m not frustrated; the app is sophisticated rather than difficult.

Its audio editing tools remains weak compared to the screen and video controls. ScreenFlow could use a zoom-in audio editor, like the larger pane in GarageBand, that would enable more precise scrubbing, edits, and clean-up to better align audio to visual components.

ScreenFlow 5 isn’t for everyone, but it might be for a surprisingly large number of people. If your only technical support is for family, a remote screen session using Join.me or Screen Sharing via Messages is probably a better option. But if you regularly find yourself in a professional environment demonstrating the same thing in OS X or iOS — whether for other employees, customers, or potential buyers — don’t be daunted by either the investment of time or money required. ScreenFlow 5 will quickly pay back as you master its features.