Many of us who grew up in the 1980s and early 1990s have fond memories of the 8-bit video game era, especially the Nintendo Entertainment System (NES), the console that pulled gaming from the abyss of the 1983 video game crash.

Alas, most of those games aren’t nearly as good as we might remember. Sure, some, like the Mario and Zelda games, hold up well, but much of the library of NES games was garbage, marred by frustrating controls, subpar gameplay, cruddy graphics (even for the era), and lousy hit detection (imagine falling through the ground). For a sense of just how bad many of these games were, check out the hilariously profane Angry Video Game Nerd series.

Even the best games of the era could be as cruel as a George R.R. Martin novel. Mega Man 2 may be one of the greatest games of all time, but it’s also one of the most frustrating. As evidence, I present a video of the game’s final boss fight, which requires you to shoot a flying alien repeatedly with the equivalent of a bowling ball that immediately falls to the ground. And that was the only weapon that worked! If you failed enough times, you had to start the level all over again. Without reading a game guide beforehand to know the correct weapon, you could spend hours of trial and error finding out.

Despite the faults of those early games, they had a certain something that made them special. The pixelated graphics with limited colors, the chiptunes, and the tropes of the era make for fond, if slightly fuzzy, memories.

Shovel Knight by Yacht Club Games evokes that golden age of gaming, while being as good as your memories of that era are. I spent an entire weekend playing through the game when it was released this summer for the Wii U, and now it’s available for the Mac for $15 (Mac OS X 10.6 Snow Leopard and later). Check out the trailer.

I highly recommend some kind of game pad. I like my old standby: a USB Xbox 360 controller with a modified directional pad. But I had trouble getting Shovel Knight to recognize it. In 10.9 Mavericks, Apple quietly slipped in support for the Xbox 360 controller for games that don’t natively support it. Unfortunately, that support seems to have disappeared in 10.10 Yosemite just as mysteriously as it arrived. An article on iMore led me to an unofficial driver that got it working
again.

Shovel Knight is a platform game that borrows from the best of the 8-bit era. Like the Mega Man series, you fight a gauntlet of bosses to gain their powers. Like “The Legend of Zelda II: The Adventure of Link”, you travel to villages where villagers sell you items, give you tips, and sometimes say nonsensical things. Like DuckTales, in addition to swinging your weapon, you can also use it like a pogo stick. And like “Super Mario Bros. 3,” you transverse the world on a map, with new areas opening up as you progress through the levels. 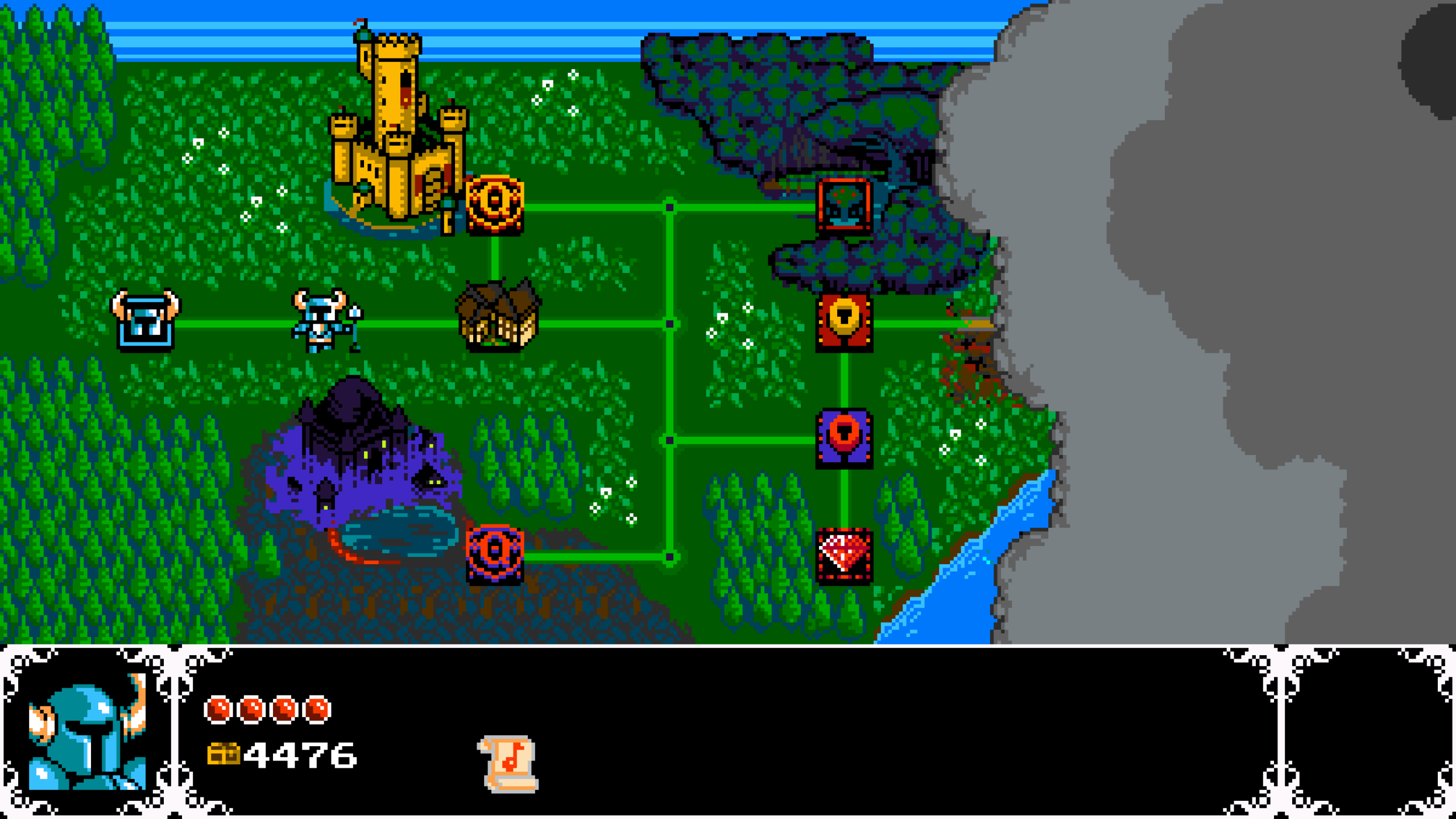 You play as the titular Shovel Knight, who went into exile after losing his beloved Shield Knight. Upon his return, he finds the land under control of the evil Enchantress, and he once again picks up his shovel on a quest to defeat her. But first, he has to fight his way through The Order of No Quarter, consisting of King Knight, Specter Knight, Treasure Knight, Mole Knight, Plague Knight, Propeller Knight, Polar Knight, and Tinker Knight.

Gameplay will be instantly familiar to anyone who remembers the NES era. You travel from stage to stage and jump between platforms, swinging your shovel at enemies and bouncing off your shovel both to attack enemies and reach high places. You can also use your shovel to dig up treasure, which can be used to purchase upgrades, like more life or magic power. 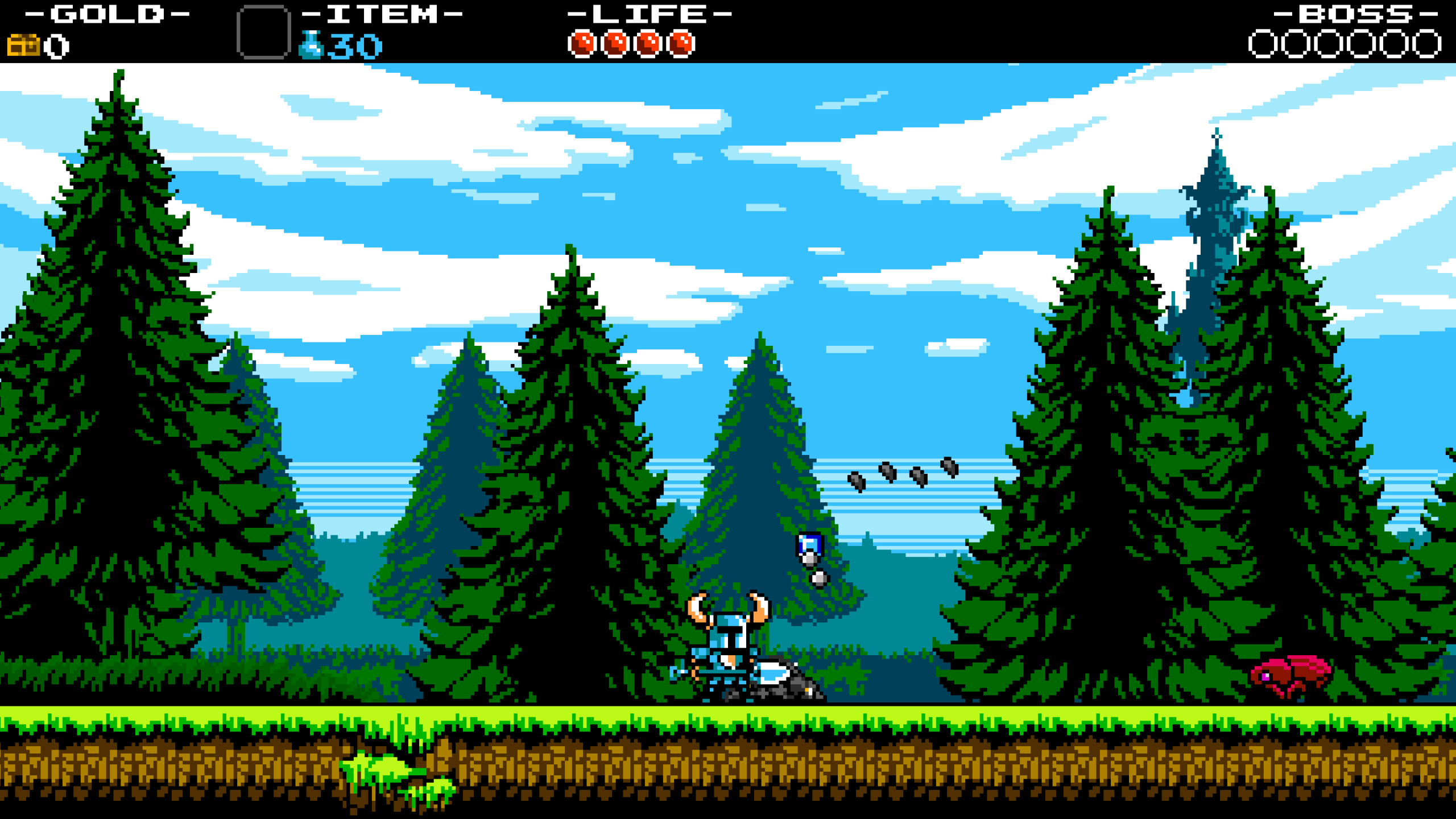 Shovel Knight eliminates much of the NES frustration by adding multiple checkpoints to levels, and abandoning the lives system that gave you limited attempts to beat a level. Instead, when you die, you drop part of your treasure and return to the last checkpoint. You can then go back to where you died and recover all or part of the treasure. Sometimes, the leftover treasure will be in a chasm where you can’t access it, unless you purchase the fishing pole, which helps you extract your treasure from those pits. 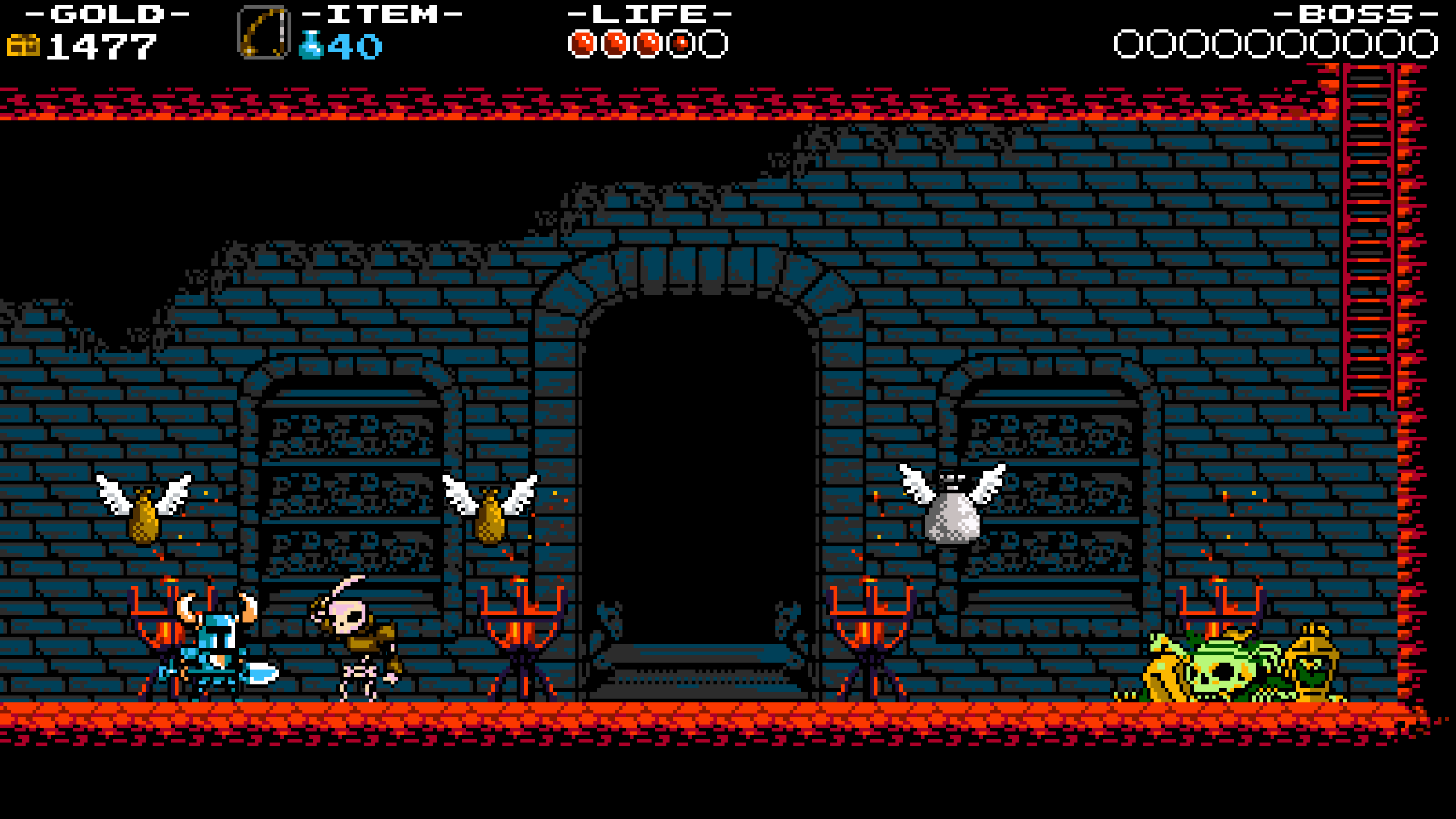 Like a Quentin Tarantino movie, Shovel Knight draws inspiration from multiple sources, while itself feeling fresh and original. And while there are more 8-bit-style games than you can shake a pixelated stick at, what makes Shovel Knight special is its attention to detail.

While many retro-style games give just a rough approximation of NES graphics, Yacht Club Games stuck as closely to the NES style as possible. While they couldn’t adhere to the NES’s 54-color limit and still get the visuals they wanted, they managed to stay within a few colors of it. The developers also added a few modern graphical touches, such as a widescreen display and parallax scrolling, which adds a sense of depth.

Despite the graphics not being possible on an NES, the sound could have been. Using an app called FamiTracker — which is used to create NES music on Windows machines — they programmed the music to work on a special sound chip called the VRC6, which was used in Japanese games of the time, but never in the West.

For more geeky details about how Yacht Club Games made Shovel Knight as authentic to the NES as possible, check out developer David D’Angelo’s post on Gamasutra.

At first, the story of Shovel Knight seems like a generic “rescue the princess” tale, but it gains subtlety and depth over the course of the game. Without spoiling anything, I will say that Shield Knight isn’t your typically helpless damsel in distress.

While the story is pretty serious for a video game, Shovel Knight keeps its tongue firmly planted in cheek. The protagonist’s weapon of choice leads to a number of puns that could have come from our own Glenn Fleishman. Early on, a character encourages Shovel Knight to not “throw in the trowel.” Shovel Knight warns a boss that he is about to taste “shovel justice.” If you enter your name as WSWWAEAW at the start of the game, then you play in “Butt Mode,” which replaces most of the proper nouns in the dialog with the word “butt.” Shovel Knight’s humor is juvenile, but it keeps the game fun.

Shovel Knight maintains the challenge of the NES era, but it never feels unfair. Controls are crisp, and each level offers plenty of checkpoints (which you can elect to destroy for more treasure and challenge). Some of the boss fights were incredibly hard, particularly the battle with Plague Knight, but the game never forced me to replay the entire level, so I could keep trying until I finally beat them.

To my mind, Shovel Knight is just about the perfect game, and it doesn’t outstay its welcome. It’s simple enough for anyone to enjoy, without being so easy that it’s boring. It blends melodrama with humor for a perfect tone of fun. And if you want more challenge, there are achievements for beating the game without spending money, without dying, and without using checkpoints.

This time of year is when gaming publications like to dole out their game of the year awards, usually reserved for big-budget extravaganzas. And while I’ve reviewed some great games this year, Shovel Knight is my FunBITS game of the year.

Comments About FunBITS: Shovel Knight Digs Up the Fun