Podcasts, those broadcast-style audio and video shows distributed as Internet downloads or streams, aren’t just for consumption on mobile devices.

I do most of my podcast listening or watching on a smartphone while on the go, or on a tablet while relaxing on the couch. But sometimes I want to get caught up on shows like MacBreak Weekly or On the Media at my Mac while taking a break from work.

Until recently, options for doing this on the Mac weren’t great. Despite Apple’s attempts to refine the podcast interface in iTunes over the years, I never became a fan, but I stuck with it because it was convenient. Then, everything changed.

Back in 2013, Vemedio released a Mac version of Instacast to complement its iOS version (see “Instacast for Mac Fills the Desktop Podcatcher Gap,” 31 May 2013). Recently, Vemedio bumped Instacast to version 2.0. Later in 2013, Jamawkinaw Enterprises, maker of the Downcast app for iOS, released a Mac version of its client (see “Downcast Comes to Mac, but Lacks Instacast’s Polish,” 3 Aug 2013).

Subsequently, a couple of Web-based podcast clients have burst onto the scene. Shifty Jelly debuted a surprisingly full-featured Web version of its Pocket Casts app for smartphones and tablets. Marco Arment, who made a splash with his audio-only Overcast app for iOS, added a simple Web player, accessible via a user’s Overcast account in a browser.

Although the various apps have their strengths and weaknesses, which desktop podcatcher you pick will, to a large extent, be determined by your preferred iOS podcatcher.

For instance, using Instacast for the Mac makes sense if you rely on Instacast on an iPhone or iPad, since the two apps synchronize your subscriptions and play positions. The same goes for the Web version of Pocket Casts. Using it is a no-brainer for those using the corresponding apps for iOS or Android, because Shifty Jelly offers its own synchronization mechanism. And so on.

There are other considerations when mulling which Mac podcatcher to embrace, and I’ll get to those in a bit. I’ll also tell you which desktop podcast client I currently prefer, and why.

But first, let’s take a close look at the various options.

Instacast for Mac 2.0 — Vemedio has essentially replicated iTunes’ podcast features, enhancing them in ways that will delight podcast aficionados.

Along with playback controls at the top of the window, Instacast 2.0 for Mac provides a simple and logical three-column configuration with a left-hand column displaying your subscribed podcasts with album art, a middle column showing a list of episodes for the selected podcast, and a big right-hand column that shows the selected episode’s show notes and other information. 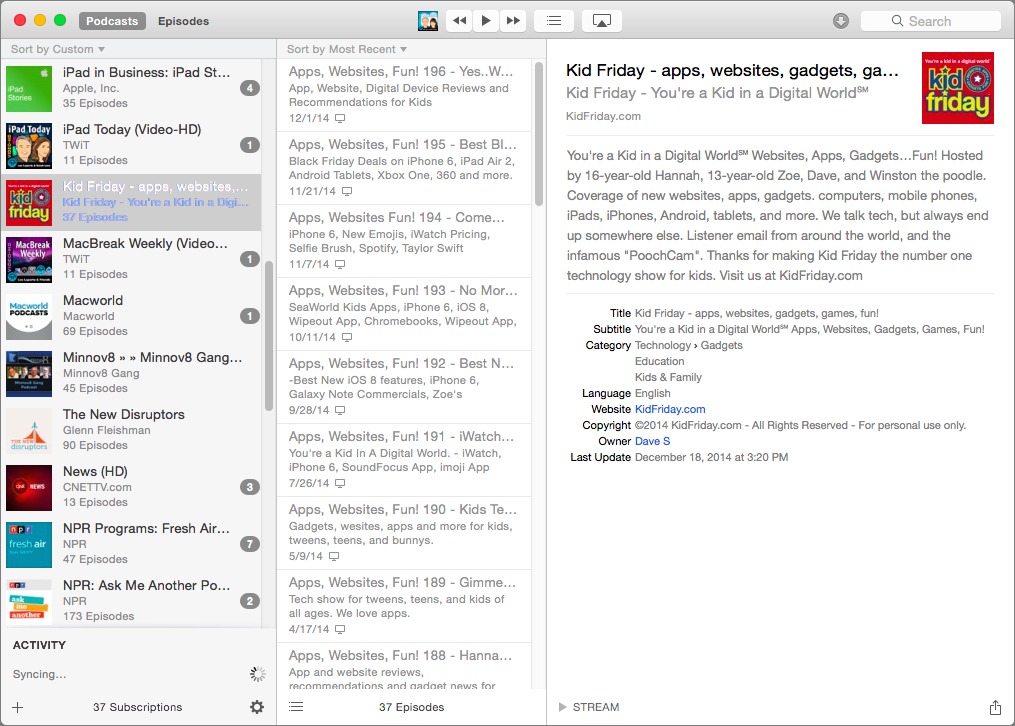 You can switch the left-hand column to instead show playlists for downloaded, unplayed, and favorited episodes across multiple podcasts, along with an option to display only video episodes. 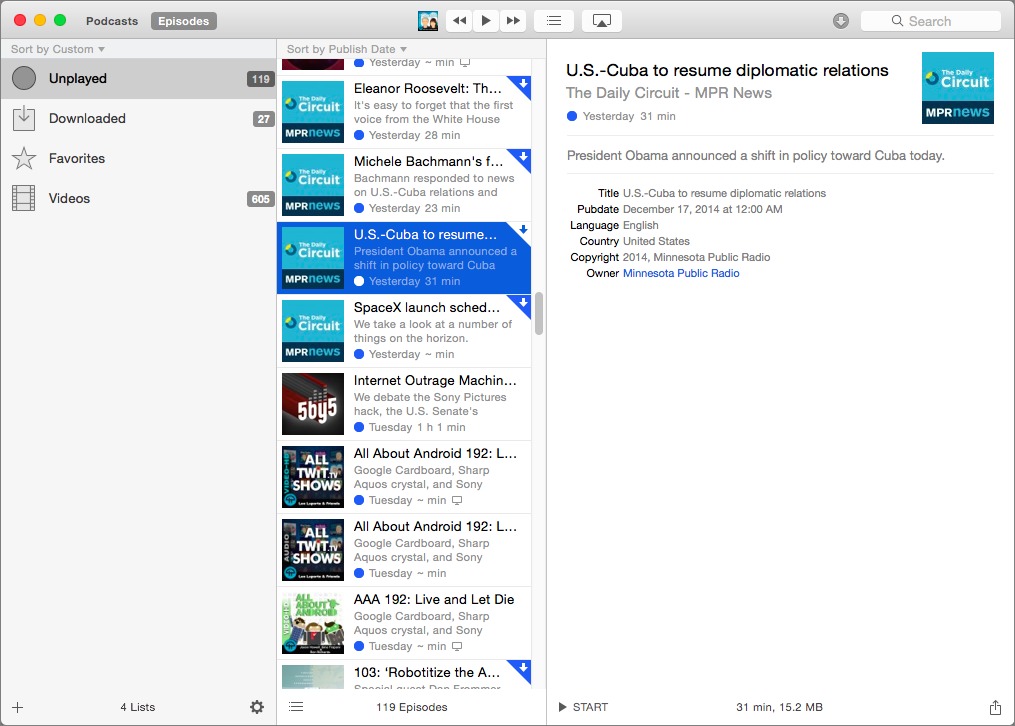 There is a podcast directory for finding new shows, as well. 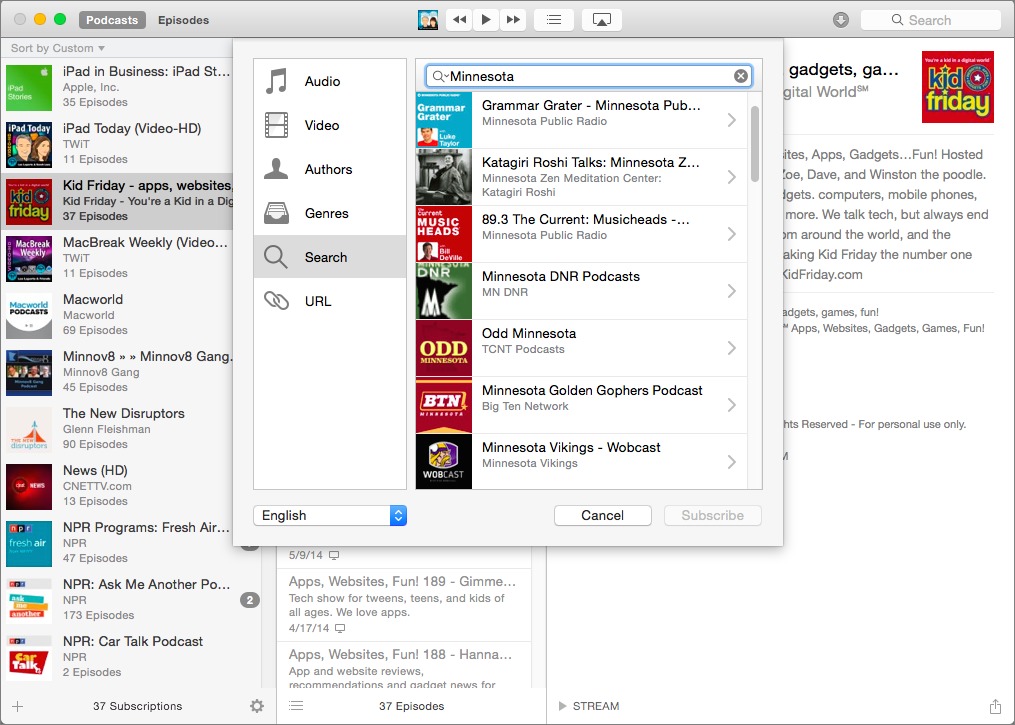 Instacast for Mac lets you download shows, but doing so is optional and I rarely bother. I generally stream podcasts, and Instacast has worked reliably in this regard. Instacast’s streamed video looks terrific, which is not always a given when streaming video, even over my broadband connection.

What’s new with 2.0? For starters, the desktop app appearance has been flattened and simplified to make it conform to the Yosemite style. I think it looks nice.

The app now lets you create customized playlists that play continuously, are populated with new episodes matching the list’s parameters, and sync to iOS and other desktops.

A new search function lets you comb through your episode collection by keyword, and it indexes show notes as well as podcast and episode names.

A single-user license of Instacast 2.0 for the Mac costs $19.99, and users of version 1.0 can upgrade for $4.99. The app is free for those who pay $14.99 per year for Instacast memberships, which offer a few bonus benefits such as no-cost iOS in-app purchases and access to beta software releases.

Downcast for Mac — Like its competitor Vemedio, Jamawkinaw Enterprises has translated its iOS podcast client to the Mac, but there are stark differences between Instacast and Downcast.

The Downcast interface takes a two-column approach instead of Instacast’s three-column approach, which I don’t think works as well. The left-hand column clumps podcasts into two big groupings, Unplayed or Partially Played and Played or Empty, one on top of the other, which seems awkward. This is similar to what Downcast for iOS does, and is part of the reason I don’t use that app. 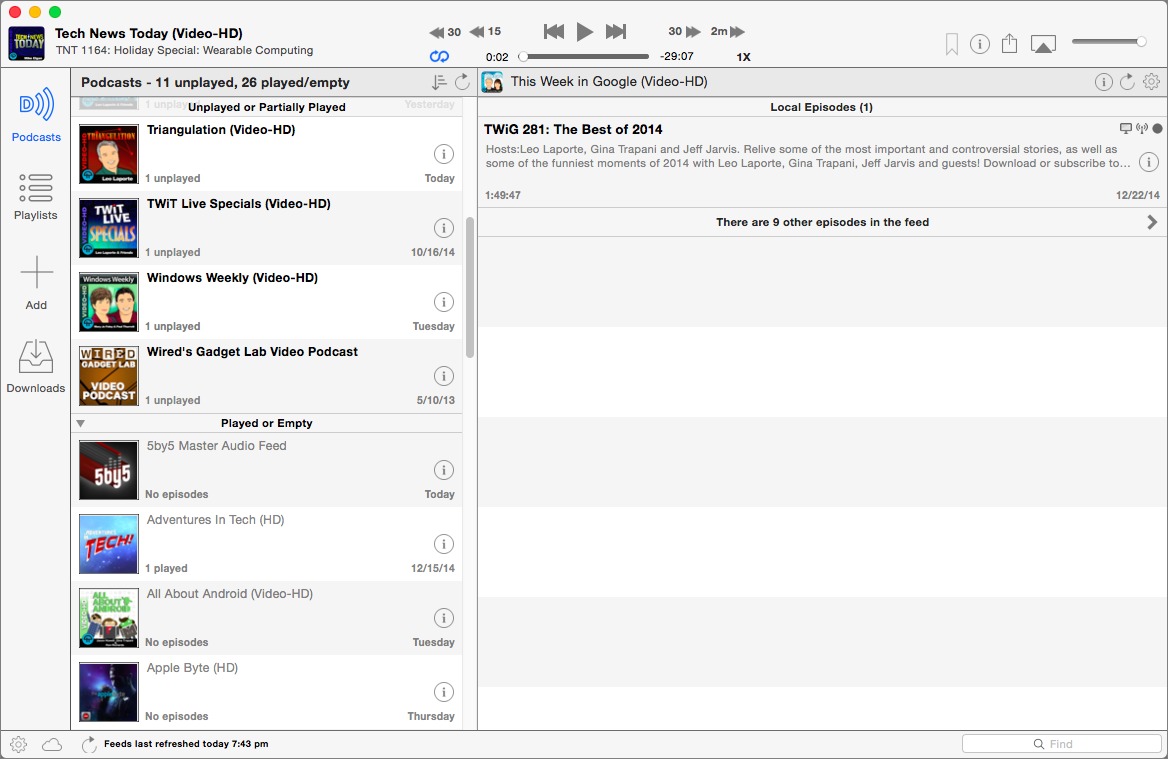 The right-hand column also seems confusing, as it puts a podcast’s “local” (which is different from downloaded) episodes at the top, along with a button to access “other” episodes. Why not just show every episode, as Instacast does? 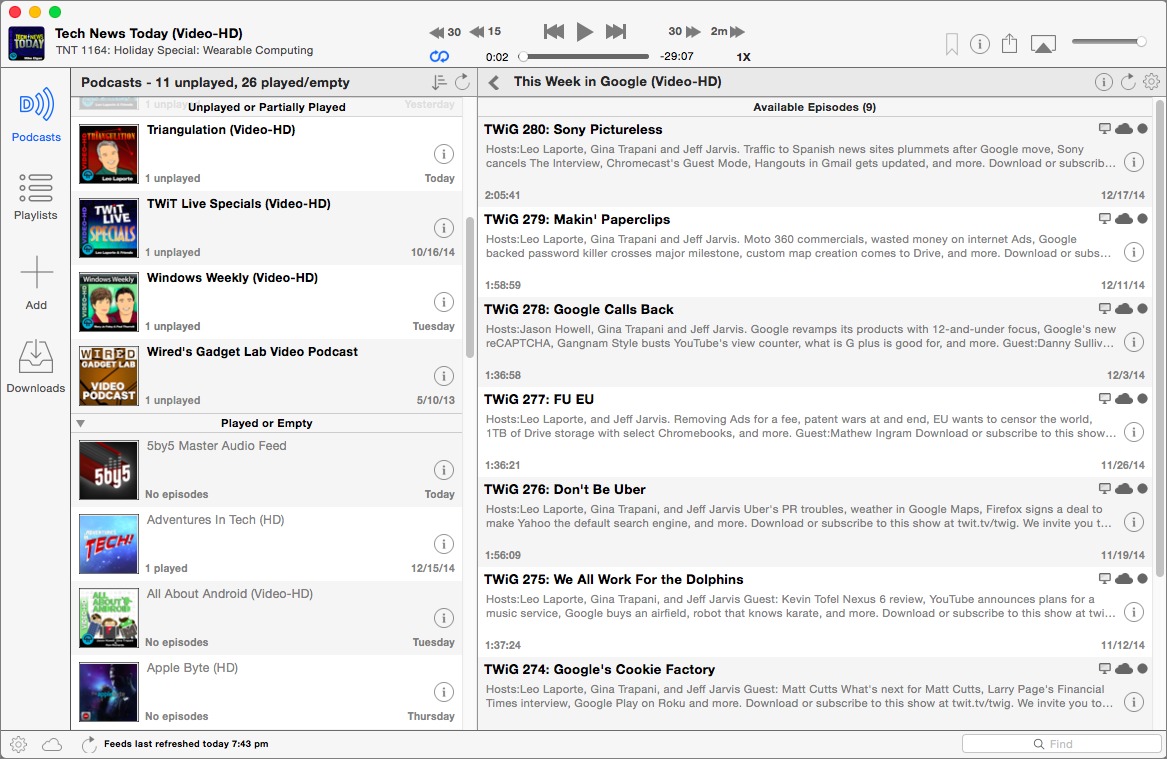 I must also confess to some distaste for Downcast’s overly spartan interface, which is little more than black and white elements with bits of blue here and there. It’s almost as if Downcast designed the Mac app for an old monochrome monitor (except for the album art, which remains in full color). If the publisher meant the interface as a Yosemite flattening exercise, I would argue it went a bit too far.

Downcast is otherwise logically designed, with a playlist section, an easy-to-peruse directory for finding podcasts, and a download queue. For those using multiple devices, Downcast syncs podcasts, episodes, playlists, and preferences via iCloud. I may sound unimpressed by Downcast, but those who like the iOS incarnation should give the Mac app a look. 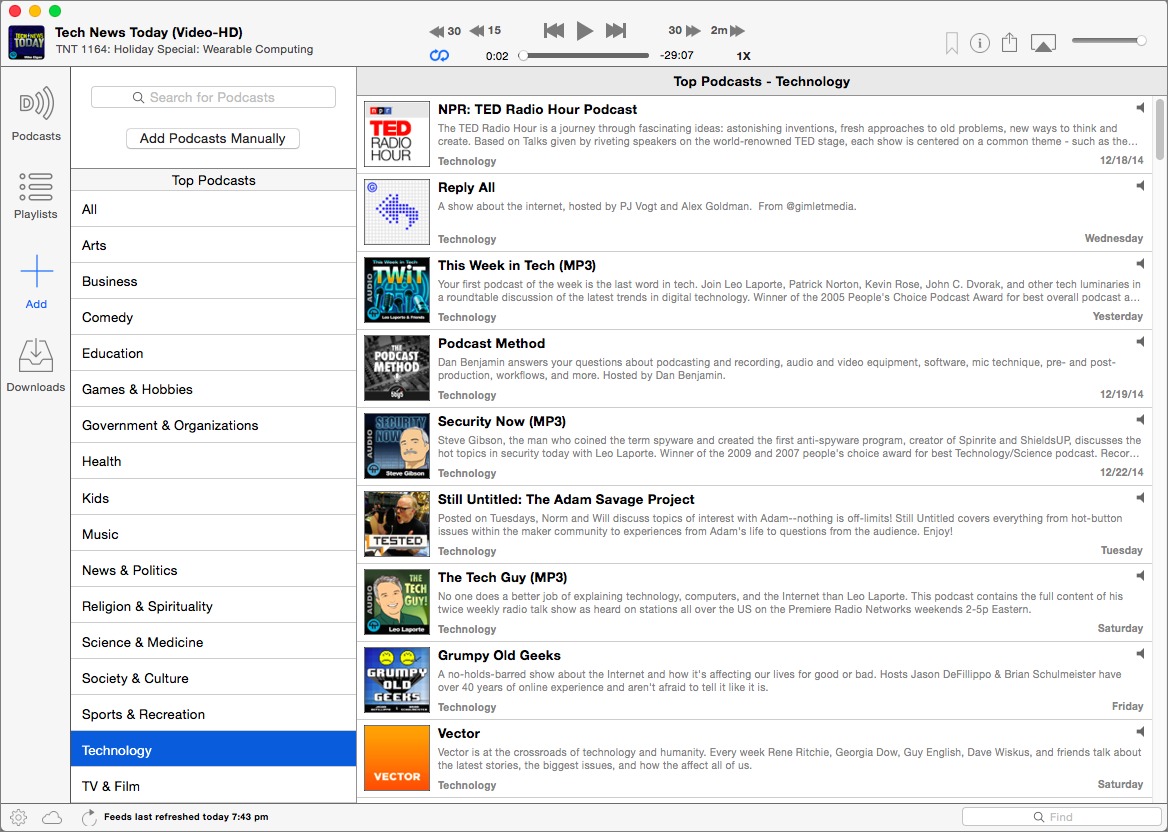 Pocket Casts for the Web — This brings me to Shifty Jelly’s Web-based Pocket Casts client, which is for streaming only. That means it’s useless if you’re at 35,000 feet or conducting research in the Amazon rainforest, but it’s otherwise a fine alternative to native apps, and the streaming performed splendidly for me.

Pocket Casts has a brightly colored, eye-catching, and ultra-flat design that is easy to grasp and use. A list of podcasts appears on the left, either as a single album-art column or a three-across grid (I prefer the latter). Click a show and its episodes appear in the right-hand pane. 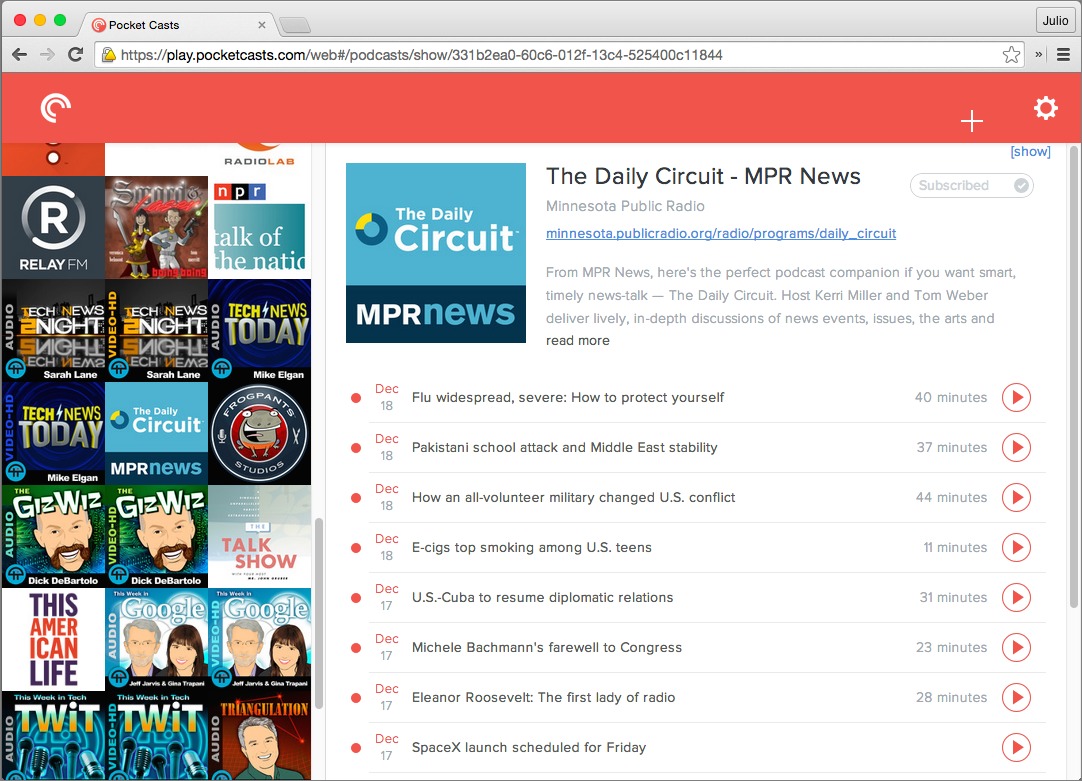 Each episode has a big play button. Clicking it for an audio episode brings up a player on the bottom of the page. For video playback, there are standard, expanded, and full-screen options (the first two appearing atop and in the center of the page). 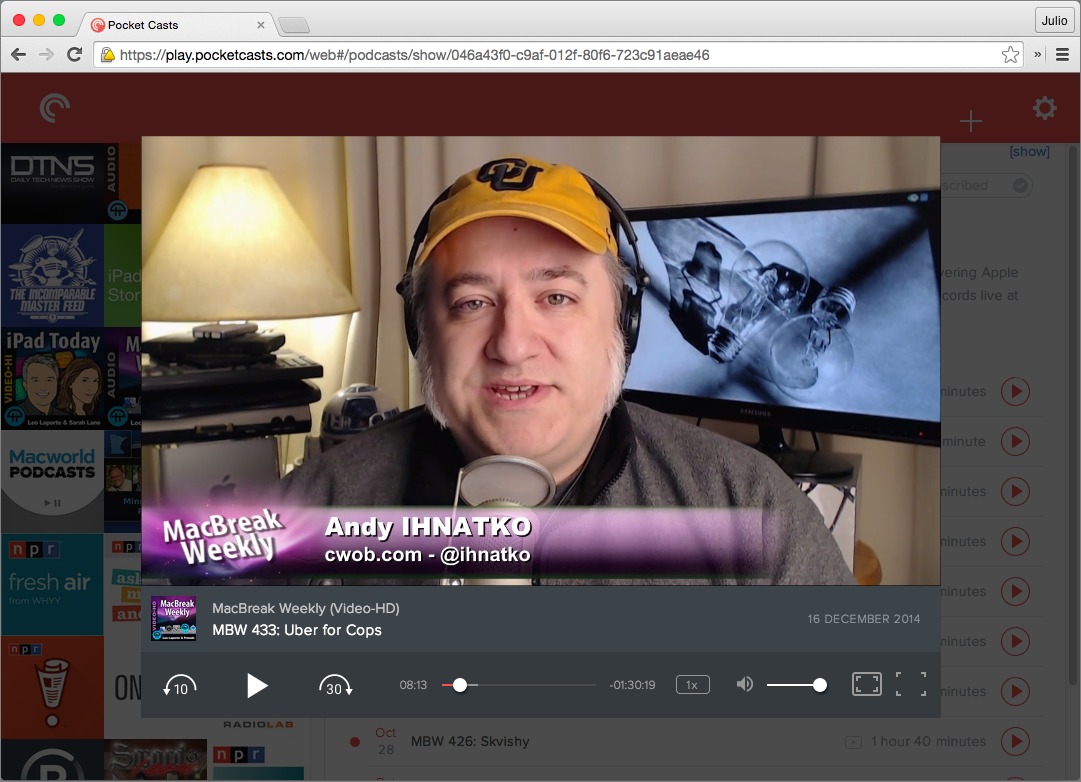 The upper left of the interface offers additional links, including Discover for accessing the podcast directory, New Releases for seeing your subscribed shows’ latest episodes, and In Progress for your partially played episodes. Play something on Pocket Casts for iOS and that progress is instantly reflected on the Web, and vice-versa. 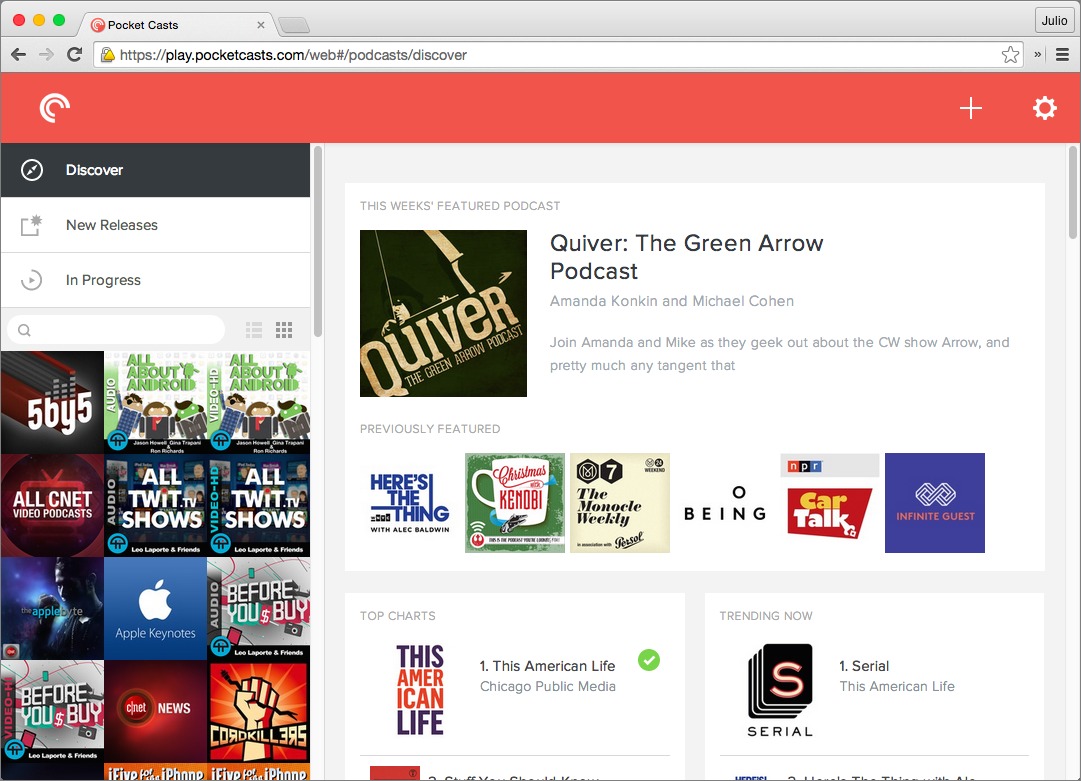 There are two separate search options: one for looking through the podcast directory for shows to sample, and another that finds keywords in the titles of subscribed shows.

I was initially skeptical that a full-featured podcasting client could be executed successfully as a Web app, but Shifty Jelly made me a believer. Pocket Casts for the Web is clean, fast, and fun to use.

Overcast can play only audio podcasts, not video podcasts, and audio features on the Web client are kept simple. The home page has “all active episodes” followed by subscribed shows in a single vertical column. Such a Downcast-like style isn’t to my liking. 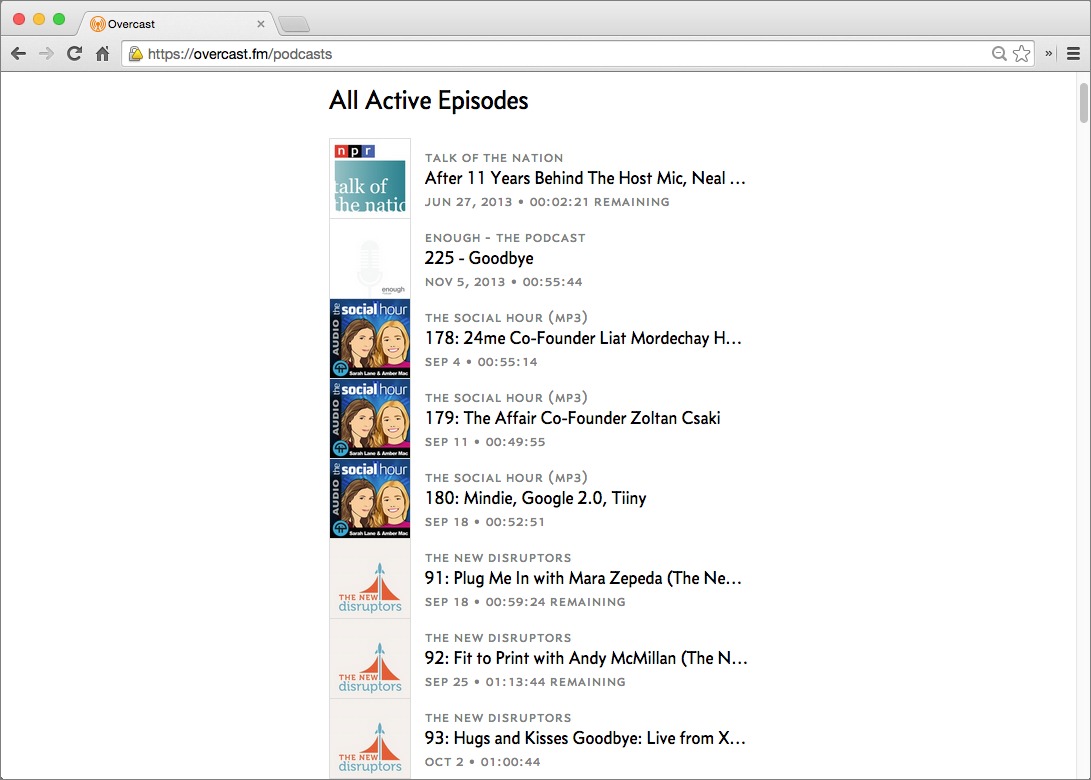 Each podcast gets its own page, as does each of the show’s episodes. For each podcast episode, there’s album art, shown large, along with a play button, a delete button, a clickable progress bar, a pair of skip buttons to jump 30 seconds backward or forward, and a speed bar with seven positions starting at 1x and ending at 2x. Permalink links go to episode pages on the podcasts’ own sites. 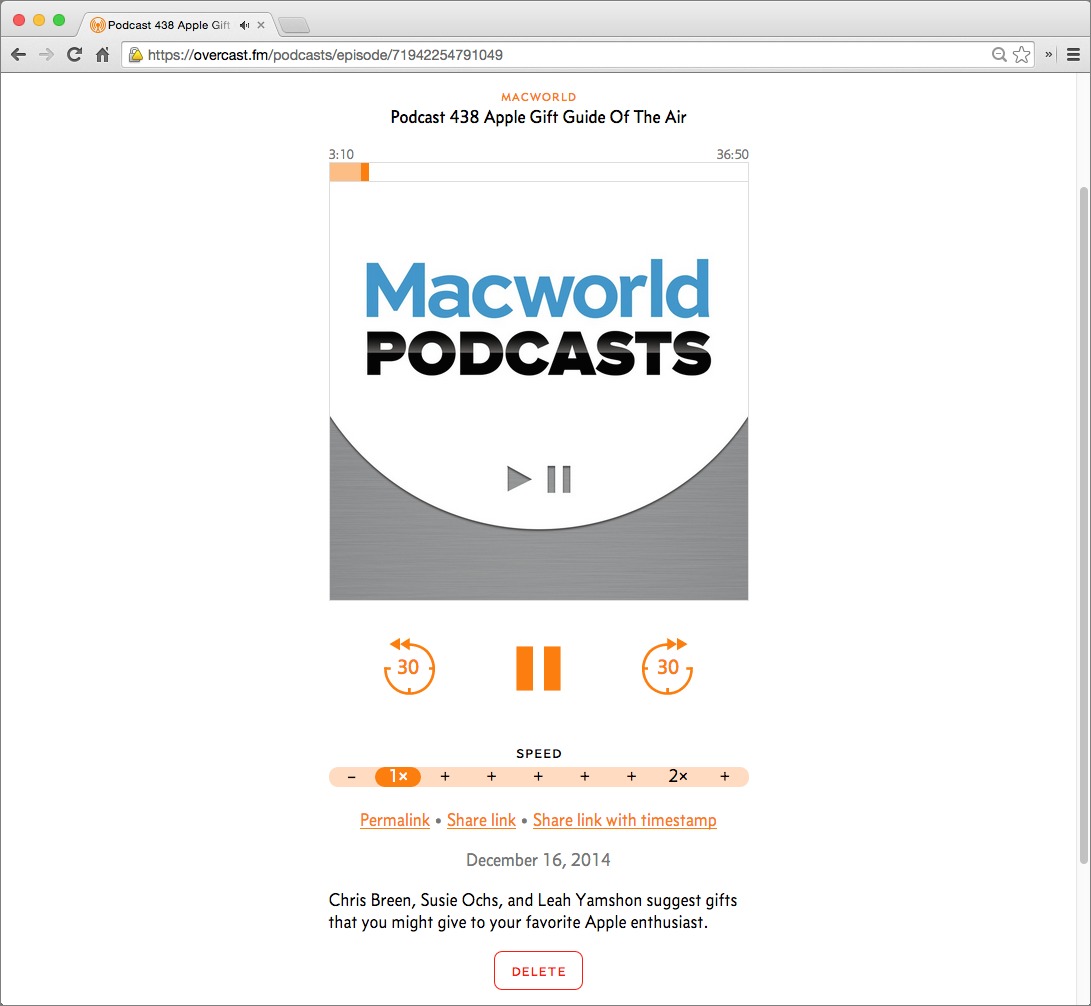 Overcast for iOS and, by extension, the Web player, are free, but users can add advanced functionality to the mobile app via in-app purchases.

Marco Arment also has Web-player improvements on tap, including searching and podcast adding.

Pocket Casts is cross-platform, in the sense that it has apps for both Android and iOS, and its Web client works just as capably on a Chromebook or Windows PC as on a Mac. I realize this may not be an issue for those who rely entirely on Apple devices, but many of us have reason to use other operating systems (I have to use Windows at my day job’s office, and I’m constantly testing Android-based smartphones and tablets). With full cross-platform syncing, Pocket Casts has people like me covered.

Shifty Jelly’s cross-platform approach is one reason I migrated from Instacast to Pocket Casts in iOS, though I must confess that Pocket Casts suits me where Instacast and Downcast do not in ways I can’t fully rationalize. Pocket Casts for the Web is a different dimension of that podcast-client love affair, and I’m head over heels.

My reason for giving Overcast a pass is clearer: It doesn’t do video, and I’m a ravenous consumer of video podcasts. Overcast is popular, recently topping 200,000 downloads in just six months, so Marco Arment is clearly doing something right and should not be pressured to embrace video. There are other podcatchers for that. He is, however, mulling a Mac app and that could be a big win for users.

Regardless of which app best meets your needs, it’s great to have so many options, unlike the old days when iTunes was pretty much the only Mac podcast client in town.