Over the holidays, I found my house full of people sitting around, staring at their phones, and blurting out random questions. The cause? A new iPhone game called Trivia Crack, which has climbed to the top of the App Store charts. And, though my guests were all playing simultaneously (and asking for help from those present), the actual games were against remote friends.

Trivia Crack comes in both an ad-supported free version and a $2.99 paid version. If you like the free version, the paid version is well worth it to get rid of the many annoying video ads.

Trivia Crack is a take on the classic board game Trivial Pursuit. Answering trivia questions is the heart of the game, but there are two distinct gameplay modes: Challenge and Classic. In Challenge mode, you compete against up to ten other players, answering a barrage of questions, and whoever answers the most questions correctly wins. 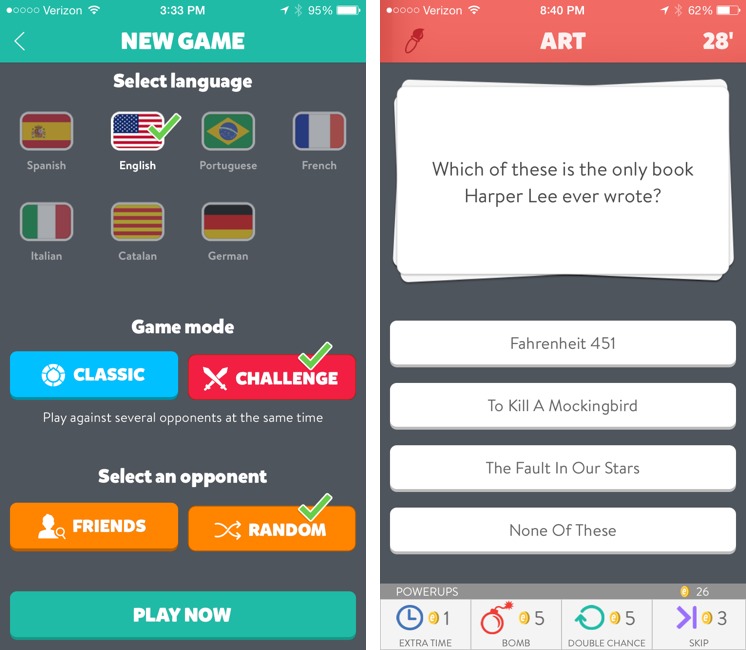 Head-to-head Classic mode is a little less straightforward. As in Trivial Pursuit, you win by collecting a set of colored pieces, called characters, with each color representing a topic: orange for sports, yellow for history, green for science, blue for geography, red for art, and purple for entertainment. The first player to collect all six characters wins.

You begin your turn by spinning the wheel, which randomly selects a category or the crown. If you get a category, you’re asked a question in that category. After three questions — or if the wheel lands on the crown — you can play to win a character of your choice or to challenge your opponent. If you choose to try to win a character, you get to pick the category from those remaining. You can also challenge your opponent to try to steal one of her characters, but that requires wagering one of your characters. Then you both answer a series of questions, and whoever provides the most correct answers wins both characters. 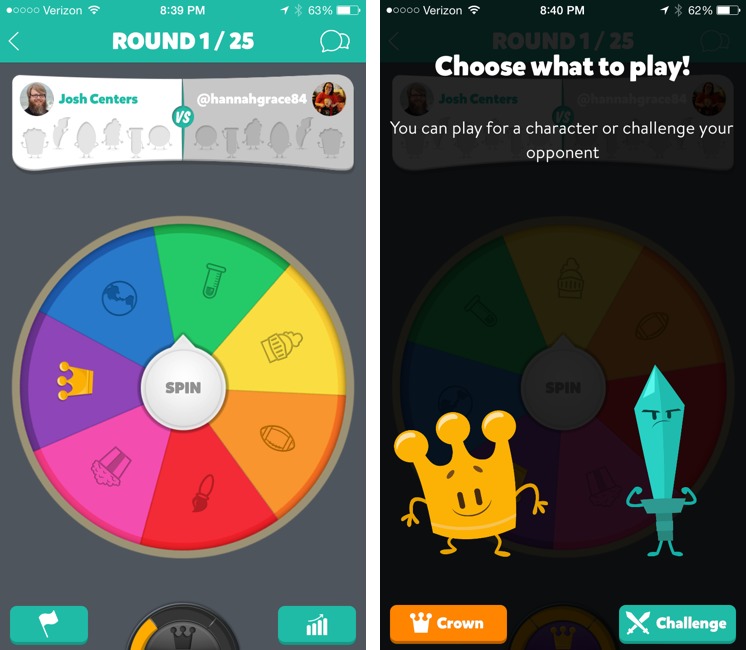 Of course, Trivia Crack wouldn’t be a contemporary iPhone game without purchasable helper items. You’re given three extra spins for free, which let you spin again if you don’t like a given category. More spins can be obtained via in-app purchases, as can coins, which are the game’s primary currency to obtain power-ups. Coins, which you also obtain upon completing a game, can be used to buy bombs to eliminate two wrong answers, extra time to answer questions, double chances to give you a second chance to get the right
answer, and the option to skip to another question.

How much you can play is limited by how many lives you have. You lose a life every time you start a game, and it takes a full hour to regenerate each life, up to a maximum of three lives. Even more annoying than in-app purchases, you can obtain additional lives by begging your Facebook friends to click to give you more. Please don’t do this. Thankfully, it’s not a huge restriction, because a game can take hours or even days to play, and lives don’t affect existing games.

Interestingly, Trivia Crack’s questions are created and vetted by the players. From the Question Factory, you can suggest your own questions, rate suggested questions, and translate questions into other languages. As you might expect, player-generated questions lead to some wonky or poorly worded questions. For example, one question asked who is most identified with physics, giving both Isaac Newton and Albert Einstein as choices. I correctly guessed Newton, but I fail to see how Einstein would have been incorrect. 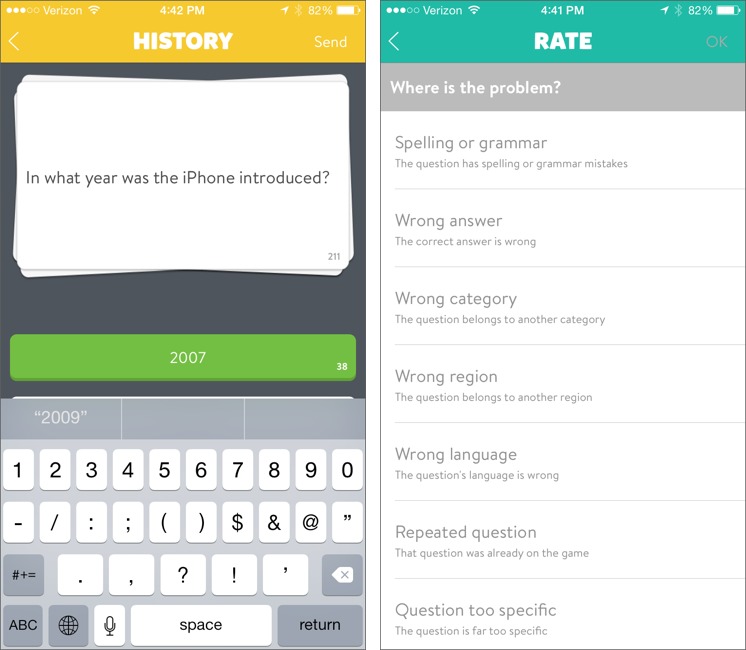 It’s a brilliant, if cynical, business model for Argentinian developer Etermax. Users either spend $2.99 on the app or get hit with numerous video ads, users create and approve the game’s content, and some users pay extra to gain advantages over other players.

I’m somewhat uncomfortable recommending Trivia Crack due to its many questionable practices. Trivia Crack features just about everything I detest in an iPhone game: “pay to win” mechanics, social media begging, and occasionally sloppy user-generated content. What Trivia Crack has in its favor is the network effect: almost all of my friends are playing it, and its gameplay is compelling. Despite its annoyances, it’s a fun way to kill some time with friends, and if you can put up with the ads and resist buying the shortcuts, it’s free to play. However, it’s much more enjoyable if you spend the $2.99 to eliminate ads. And while an opponent technically could purchase his way to victory, I managed to win a good portion of matches
without buying anything. Thankfully, I have frugal friends.