After publishing “The TidBITS Wishlist for Apple in 2015,” (5 January 2015), we received a lot of great feedback from readers. While most people echoed our sentiments, a number offered additional suggestions. Without further ado, here’s a selection of what TidBITS readers would like to see from Apple in 2015.

Do Something about iTunes! — Complaining about iTunes has become a common refrain for Apple enthusiasts, and we don’t disagree. Specific complaints include:

Many users have felt for years that iTunes is terribly broken. But what no one seems to agree on is how to fix it. Considering that complaints have continued — and perhaps even accelerated — after two redesigns, it seems doubtful that Apple knows what to do either.

One approach would be to split up the functionality of iTunes among multiple apps, much as Apple did in iOS: iTunes for iTunes Store purchases, Music for music playback, Podcasts to listen to podcasts, Videos for purchased movies and TV shows, and iTunes U for educational materials. A new app would be necessary to manage syncing and backing up iOS devices. One problem with this solution is that iTunes is also available on Windows, and that would mean that those users (and Apple’s Windows developers) would have to juggle numerous apps instead of just one.

We’d settle for a return to the simplicity of older versions of iTunes. Abandon the pretty — but confusing — visual design and return to iTunes 10.7’s sortable “spreadsheet” interface with a sidebar for navigation. It may not have been as attractive as later versions of iTunes, but it was far easier to use. 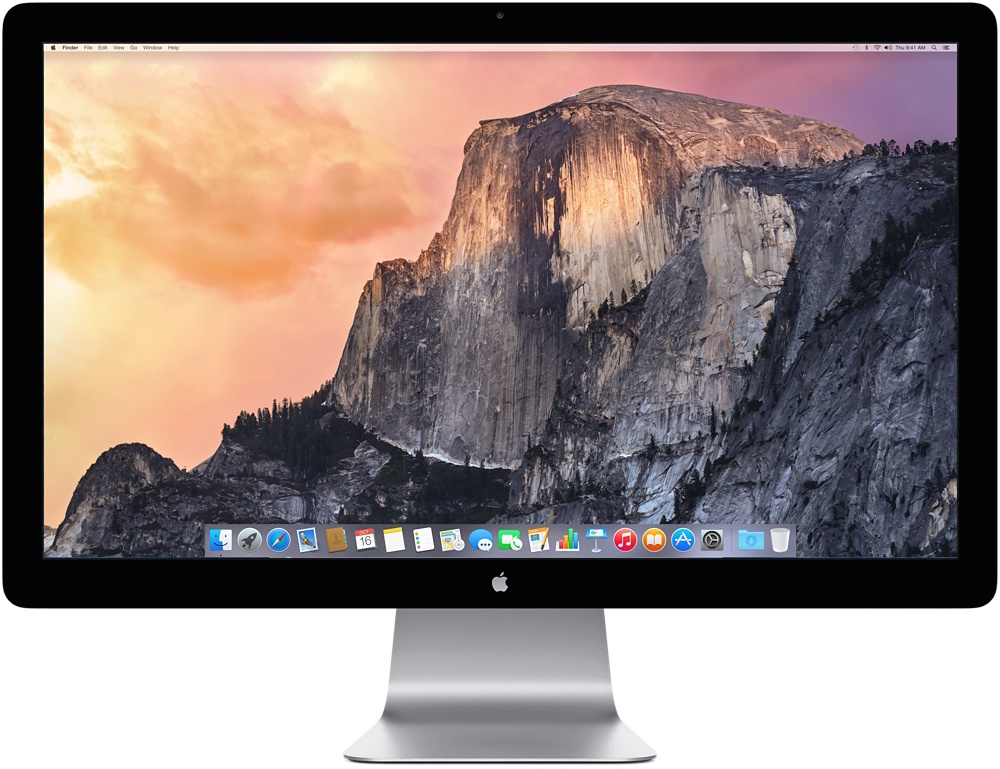 In reality, even if the Thunderbolt Display worked perfectly (many reports indicate that it doesn’t), it’s woefully long in the tooth. It’s still using USB 2.0, the first generation of Thunderbolt, and the original MagSafe connector, although Apple does ship it with a MagSafe 2 adapter.

A more difficult technical barrier to hurdle (due to Thunderbolt bandwidth limitations) is the fact that the Thunderbolt Display is still stuck at a mere 2560 by 1440 resolution, even as the iMac with 5K Retina display has zoomed ahead. On the industrial design side, while the iMac has slimmed down around the edges, the Thunderbolt Display is as chunky as it was in 2011. Its ergonomics remain poor as well — it tilts forward and back, but the screen height can’t be adjusted, forcing some people to stack it on books.

At $999, the Thunderbolt Display is tough to recommend. Dell makes far more adjustable displays with the same image quality and better connectivity for lower prices. If Apple is interested in the monitor game, it needs to step up to the next level. Peter Cohen of iMore agrees.

Let Us Merge Apple Accounts — Mac users who predate iCloud — and that’s a lot of people — could easily have accumulated more than one Apple ID. That was particularly true if you purchased from the online Apple Store or were dealing with your own email address changes. But with the transition from MobileMe to iCloud, Apple made the previously humble Apple ID all-important, while refusing to allow users to merge accounts (see “Apple ID Becomes Mac OS X and iCloud Glue,” 8 September 2011).

Some lucky users quickly standardized on a single Apple ID and let the others molder, but for many of us, that wasn’t possible. It’s all too easy to have one Apple ID for a heavily used iCloud account and another that had been used for all iTunes and App Store purchases. Worse, Apple sometimes required additional Apple IDs for internal reasons — we had to create yet another one to be able to publish on the iBooks Store. It’s a mess.

Sure, you can now sort of group Apple IDs together with Family Sharing, but isn’t it about time Apple let users merge all those old accounts? Alas, at this point, such an option doesn’t seem likely, but it can’t hurt to wish.

A Competitor to the Microsoft Surface — Frequent TidBITS contributor Julio Ojeda-Zapata likes his Microsoft Surface Pro (see “Microsoft Surface: A Tale of Two Computers,” 11 March 2014), which combines the functionalities of a tablet and a laptop. While that’s a tantalizing prospect, many who have tried Windows 8 have been baffled by its mixed interface, which tries to please touchscreen and mouse users equally. Several readers, tired of needing both MacBooks and iPads, suggested Apple could create a similar combination.

Apple has been firm about keeping OS X and iOS separate, but then again, Apple (in the person of Steve Jobs) also said that video on an iPod would be pointless and that no one reads anymore, only to have the company change direction entirely. And if there’s one thing Apple excels at, it’s taking half-baked ideas (MP3 players, mobile phones, and tablet computers, to name a few) and turning them into game-changing products.

While we generally ignore rumors, Mark Gurman of 9to5Mac recently wrote about a rumored 12-inch MacBook Air. This new MacBook Air would be even thinner than ever before, thanks to abandoning all but two ports: a headphone jack and a new USB-C reversible connector.

We’re skeptical that this model is in the works, or, if Apple is indeed working on that form factor, the specifics. It would be surprising to see Apple drop Thunderbolt and MagSafe for USB-C — it seems more likely that Apple would wait for Thunderbolt 3 for a combined digital data and power cable.

But here’s a wild possibility, suggested by developer Marco Arment: what if the long-rumored 12-inch iPad Pro and the now-rumored 12-inch MacBook Air are one and the same? Or perhaps that’s just random speculation — rumormonger Jack March is certain Apple isn’t making a hybrid. You can see why we so seldom cover rumors.

Improve Health — The Health app in iOS 8 promised to combine data from all of your health-tracking apps in one handy place, putting it all into beautiful charts.

Which it sort of does. Sure, it puts the data into charts, but much like Amazon sales charts, they offer little in the way of usable data. For instance, in the screenshot below, there might as well not even be a Y-axis for step data. You can see a rough chart of activity relative to each day, but there’s no baseline to determine how much each data point represents. We just know that each point represents somewhere between 276 and 4,460 steps. 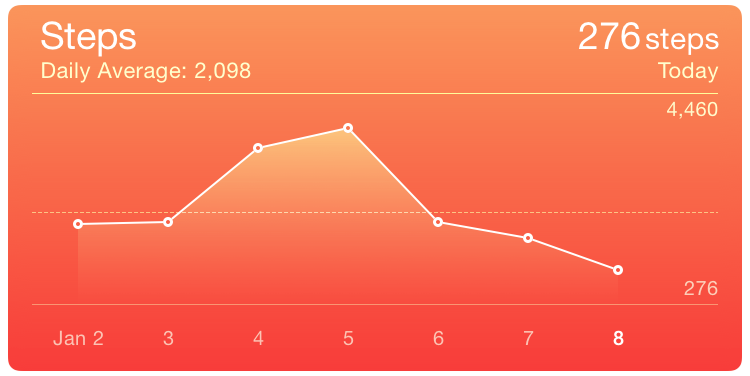 Bringing up All Recorded Data is even less worthwhile, because you see either a screen with a loading spinner that never stops, or an inscrutable collection of data, added seemingly at random. 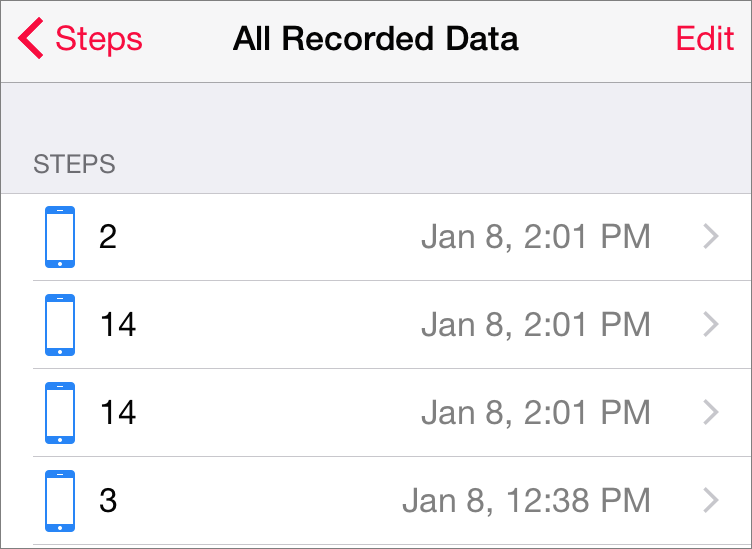 The data in the screenshot above is a perfect example. Why does Health show the steps taken at 2:01 PM in three entries rather than combining them? And why even break it down that far? An hourly summary would probably be sufficient.

Overall, the Health app is weak and sickly, but it seems like a great idea, and with some restorative design, it could be a lot more informative and useful.

Comments About The TidBITS Reader Wishlist for Apple in 2015