It’s a frustrating time to be in Apple’s consumer photography orbit. Millions of people capture photos on their iPhones and iPads, and it’s safe to assume that a large percentage of those folks also use iCloud’s My Photo Stream, the feature for automatically copying newly taken snapshots to iCloud and making them available on other Apple devices.

The whole point of My Photo Stream is to make the photos appear on all your devices automatically, but on the Mac, they can be viewed only in iPhoto or Aperture, Apple’s own photo apps. Alas, both applications are being replaced by a new Photos for OS X app — sometime in “early 2015,” providing even less incentive to use the applications now (see “Aperture’s Golden Hour,” 2 July 2014).

I no longer use either application to manage my photo library (as I explain in my book “Take Control of Your Digital Photos on a Mac”), and yet I can’t ignore them entirely, because they’re the only official ways to view those My Photo Stream photos on the Mac.

iPhoto and Aperture are also the only options for backing up My Photo Stream photos. One of the main limitations of My Photo Stream is that on mobile devices, photos are saved on iCloud’s servers for only 30 days; after that, the oldest ones are deleted from the stream. (The original photo stays on the device used to capture it — Apple deletes just the copies made for My Photo Stream.)

This can lead to a situation where, for example, a photo taken using your iPhone would no longer be accessible on your Mac if you didn’t manually import it within that 30 day window.

Alternatively, you can import the photos to the Mac manually by connecting the iPhone or iPad as if it were a regular digital camera, but that’s a step many people forget to do in this age of iCloud backups. Plus, again, that runs against the intent of My Photo Stream as a feature that makes your photos appear automatically.

Ironically, iPad and iPhone users whose computers run Windows don’t need to worry about any of this. Since Apple doesn’t make a photo-management application for Windows, the iCloud control panel simply stores My Photo Stream images in the Pictures folder on the hard disk.

Diverting the Stream — You’ll notice I referred to iPhoto and Aperture as the only official ways to collect My Photo Stream photos on the Mac. This opens up an opportunity where a third-party developer can arrive to address the situation.

MyPhotostream by We Are Yeah is a $6.99 Mac application that sidesteps iPhoto and Aperture and delivers your My Photo Stream photos in a minimal, uncluttered interface (a free 30-day trial is available). You don’t need to worry about Aperture’s complexity or iPhoto’s sluggishness.

MyPhotostream does require that you’ve set up iCloud’s My Photo Stream feature in iPhoto or Aperture at least once, but from then on you don’t need to open either application.

When I say the application has a “minimal interface,” I’m not playing reviewer buzzword bingo. Opening the app presents a single window with thumbnails for your most recent My Photo Stream images. It doesn’t bother with Shared Photo Streams — photos that appear on the devices of people who subscribe to a shared collection — nor does it care about albums you’ve made. The photos are read-only, so you can’t edit or even delete them in the application. 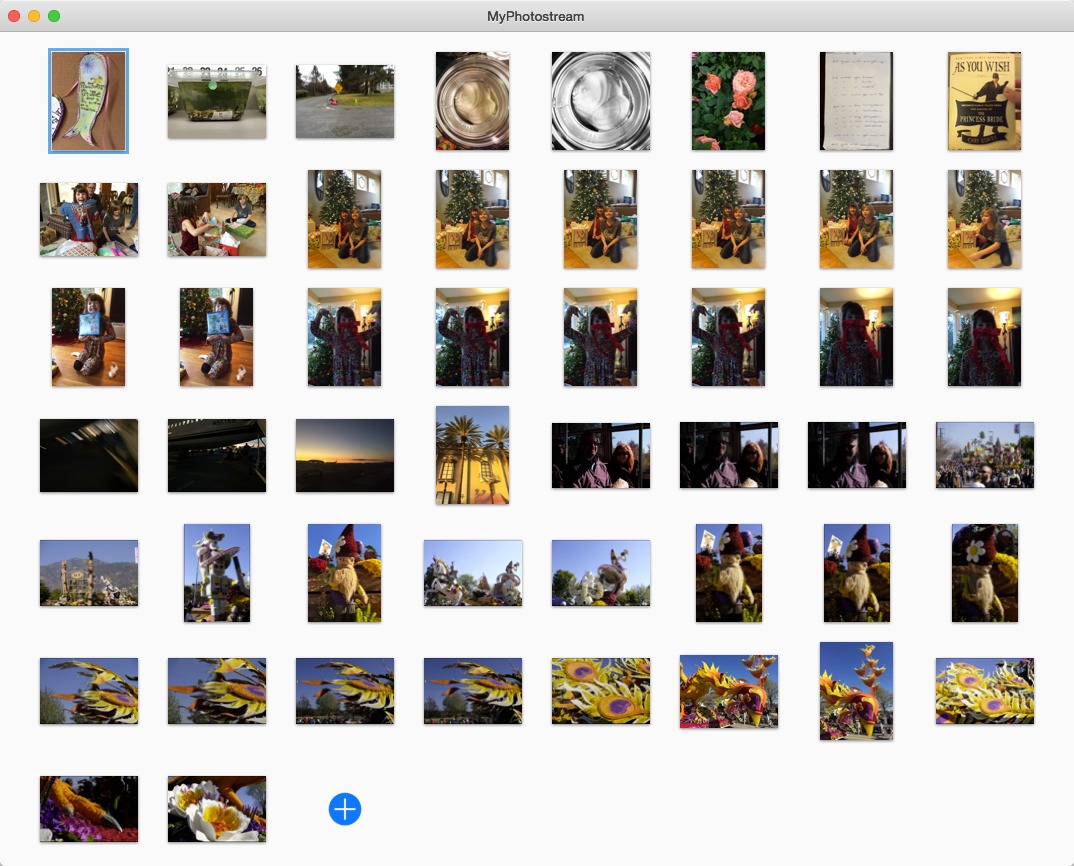 To view a photo, double-click its thumbnail. The image occupies the size of the application window. A toolbar of controls appears when the mouse pointer is moved, enabling you to view the previous or next image, close the photo view and return to the thumbnails, share the photo, or save the photo to your Downloads folder. You can also drag photos to a folder in the Finder. 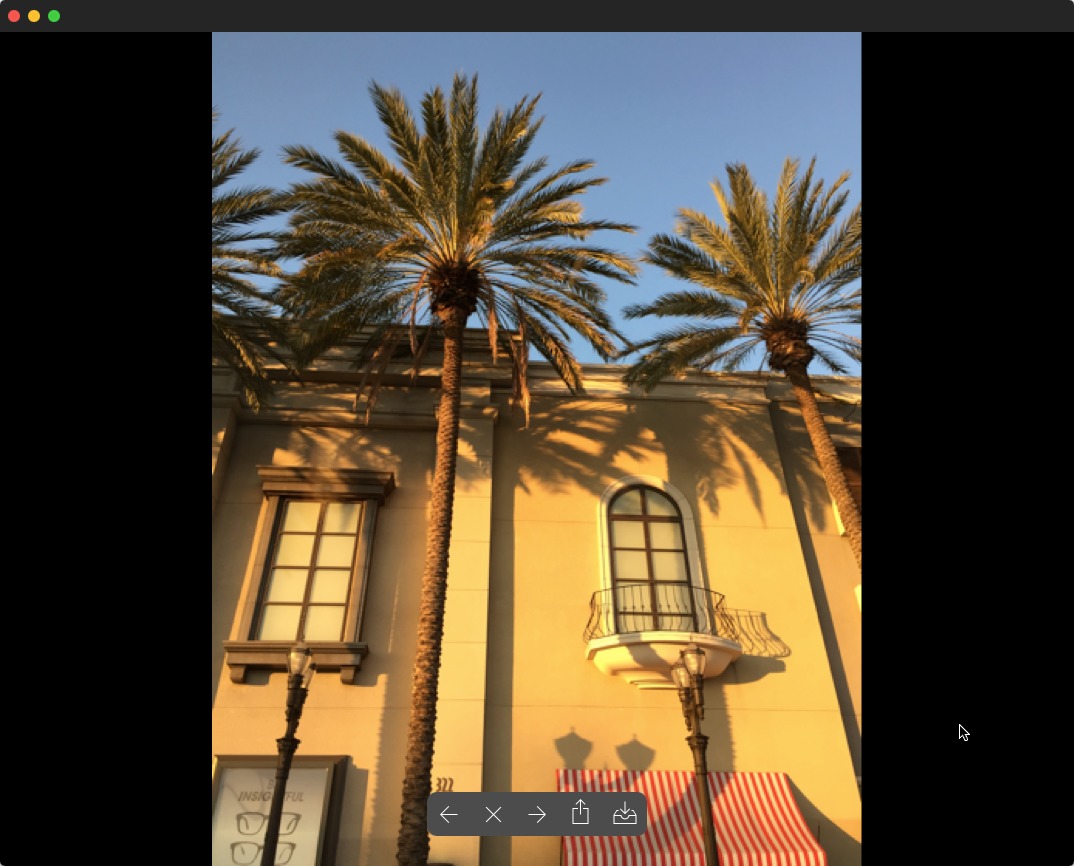 When new photos are added to your My Photo Stream, they appear on the Mac within seconds, heralded by an OS X notification. A Today widget in OS X Yosemite’s Notification Center also shows the most recent eight images.

Limitations and Quirks — Unfortunately, while MyPhotostream provides an easy window to My Photo Stream, it doesn’t fully match the behavior of iPhoto or Aperture when it comes to backing up those images. According to the developer’s FAQ, photos are not copied to the Mac over time:

MyPhotostream shows only the current content of your Photo Stream, that is, up to 1000 photos. However you can select multiple photos at once and copy them to your Mac either by dragging them to a certain folder (e.g., your Desktop) or by clicking the Download icon, which copies the photo to your Downloads folder.

The My Photo Stream photos are stored on disk, squirreled away in ~/Library/Application Support/iLifeAssetManagement/sub/, with each encased in an inscrutably named folder. However, iCloud automatically rotates those photos out after 30 days. For backups, then, a better method is to use something like the Camera Uploads feature of Dropbox on your iOS devices, which drops the photos into a folder on the Mac.

Another functional shortcoming, however, is also present in Apple’s own applications. When you edit a photo on an iOS device in the Photos app, the edits are not carried over to MyPhotostream.

I’m sure the new Photos for OS X application will display edited versions properly, and hopefully developers can tap into that functionality for those who don’t want or need to run the new program.

MyPhotostream exhibits some interface infelicities. For example, the oddly designed View menu desperately wants to be a Preferences dialog, with options for choosing how many thumbnails are displayed at launch. 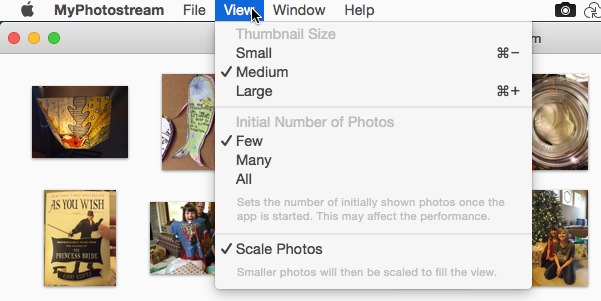 Also, it needs some development polish. Its window defaults to a size of 601 by 496 pixels, or a 4-by-4 grid of medium-sized thumbnails, so you need to resize the window each time you open the application. The setting on the View menu that determines how many images appear (Few, Many, or All) is something MyPhotostream should handle in the background, filling the visible area of the window and caching the rest for display when the user scrolls.

The Photo Stream around Us — We can’t stop taking photos while waiting for Apple to release Photos for OS X, so it’s good that an application like MyPhotostream is stepping in to relieve some of the frustration. Although I have some quibbles about how MyPhotostream presents options to the user, those are superseded by the utility of being able to view My Photo Stream images on my Mac without launching iPhoto or Aperture.

The question is, will MyPhotostream stay on my Mac when Photos for OS X arrives? Again, I wish we knew more about Apple’s replacement, but I suspect it won’t be as streamlined as I’d like. As a Lightroom user, I can still see an advantage of running a small application devoted only to accessing My Photo Stream photos.