When Microsoft rolled out iOS versions of its Word, Excel, and PowerPoint productivity apps early last year (see “Office for iPad: A Deep Look,” 3 April 2014), another of its flagship Office apps, Outlook, was glaringly absent. But an iOS flavor of the ubiquitous mail, calendar, and contact app seemed inevitable.

After all, a Mac variation of Outlook has been available for years (alongside the original Windows version) and even saw a big update in October (see “Microsoft Outlook 15.3 for Mac,” 2 November 2014). What’s more, Microsoft in December snapped up tech startup Acompli, which had developed a mobile app for email, scheduling, contact management, and more.

Sure enough, Microsoft last month released upgraded iOS and Android versions of the Acompli app, but under a familiar name: Outlook. Both are free.

The new Outlook is being positioned as a no-brainer for those already invested in Office-type productivity, and as a highly integrated messaging, scheduling, and contact-management hub for those who don’t want to juggle individual apps.

Multi-service compatibility is another Outlook draw. It works with Google, Yahoo, and iCloud, along with Microsoft’s Exchange ActiveSync and Outlook.com (but not generic IMAP accounts). Cloud-storage services Box, Dropbox, Google Drive and, of course, Microsoft’s OneDrive are also along for the ride. 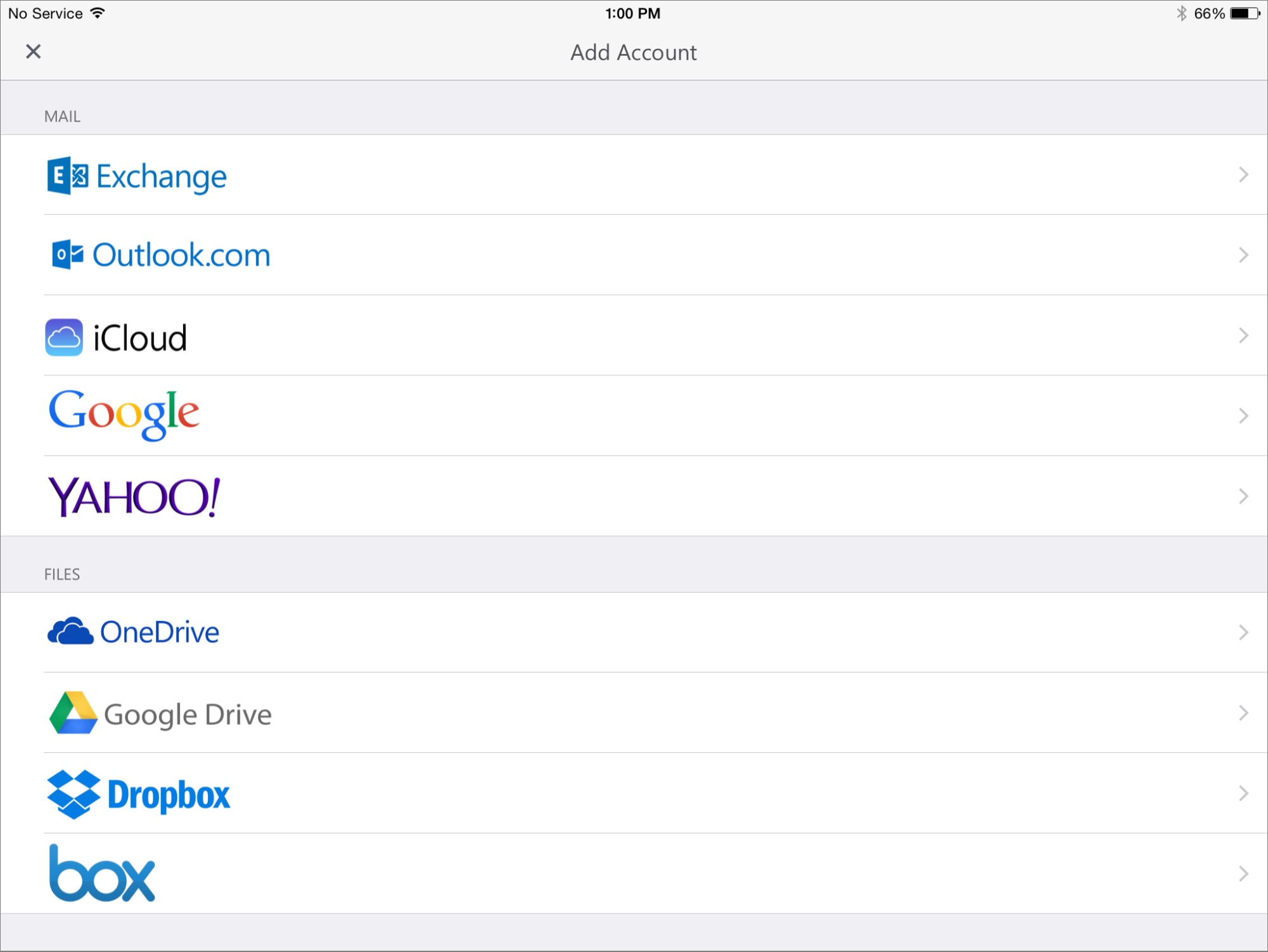 In a holdover from the Acompli period, Outlook has a streamlined interface with Mail, Calendar, Files, and People buttons (plus Settings) along the bottom for easily switching from mode to mode.

It’s worth noting that Apple’s Mail, Calendar, and Contacts apps collectively do most of what Outlook does – and support one service, AOL, that Outlook doesn’t, along with conventional IMAP accounts – but there is something to be said for having all your information in one place. That has long been a Microsoft design goal.

Mail — Once your various email accounts have been set up, they’re accessible in Outlook’s Mail view via a menu that swoops in from the screen’s left edge. That menu offers single-tap access to the inbox for each account, as well as a consolidated inbox, and account subfolders are available with another tap or two. 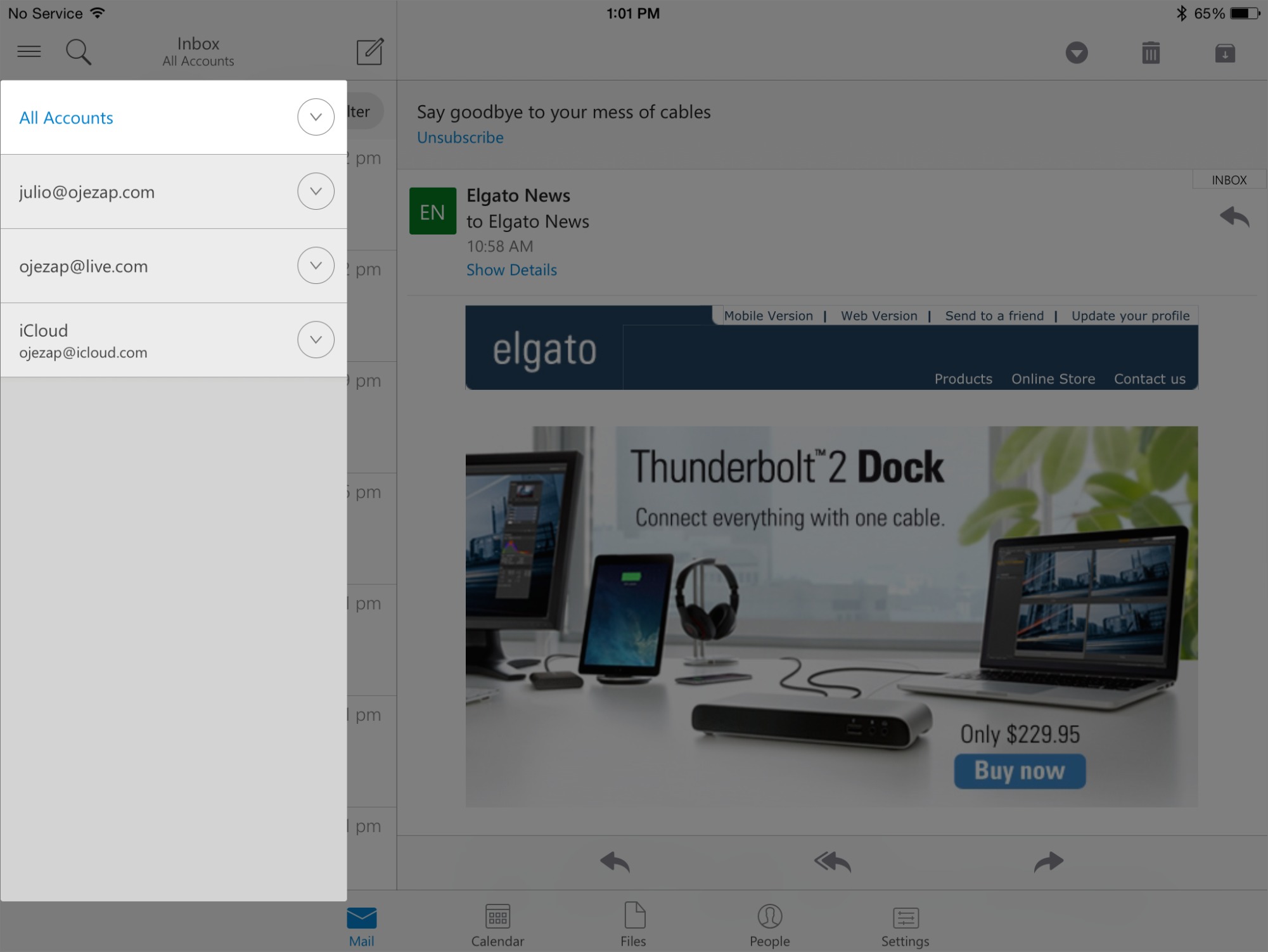 Mail can be filtered in a number of ways. Most notably, messages can be displayed in Focused and Other views, with the former option showing only important missives. Outlook had an initially flawed grasp of what that meant for me – spam made the cut in certain cases, alongside messages from my mother and my best friend – but the app learns over time. Separately, a Quick Filter menu narrows options to unread email, flagged emails, or messages with file attachments. 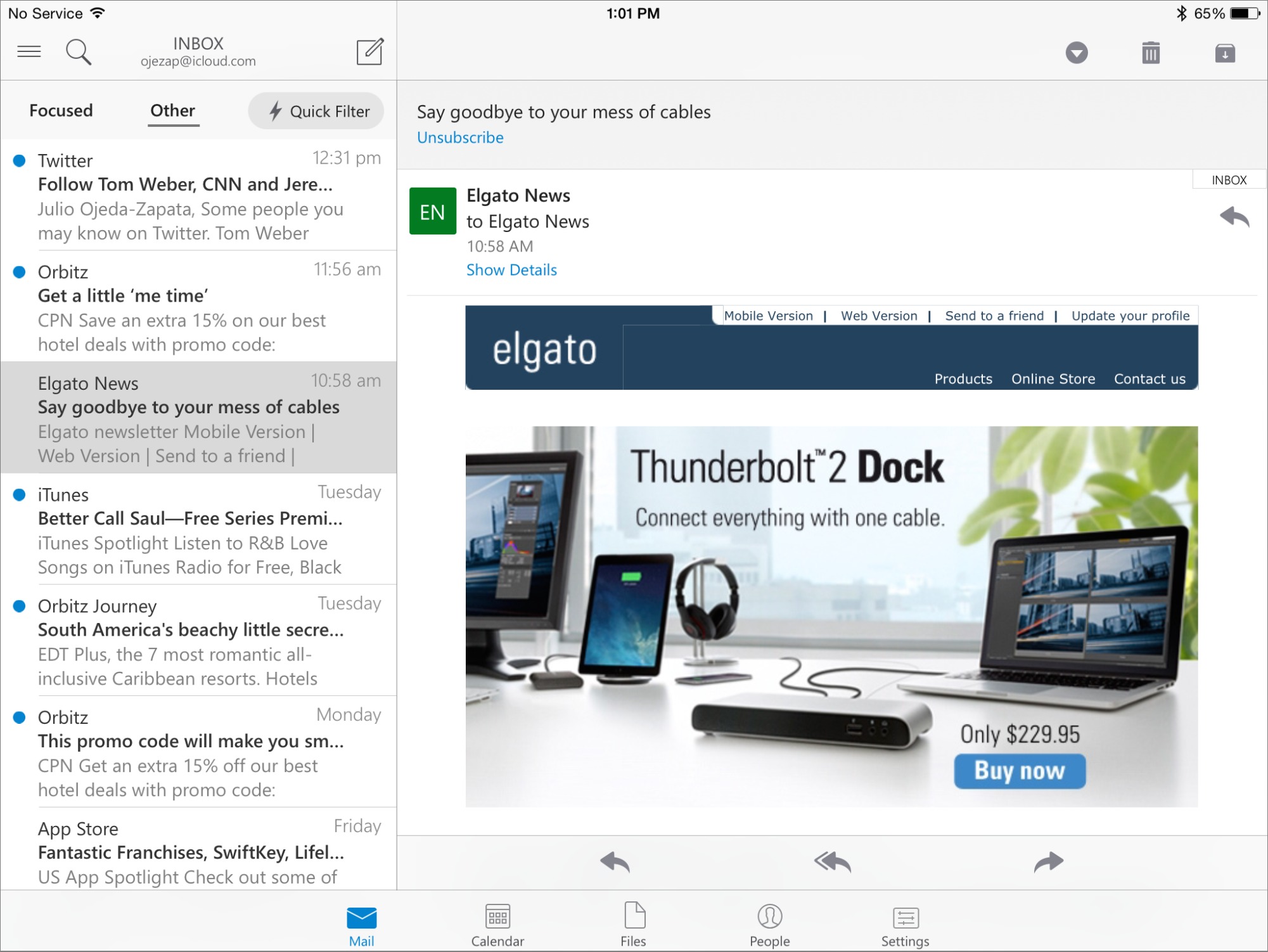 Outlook has familiar Mailbox-style swiping gestures, which can be customized. By default, the app archives a message with a leftward swipe, and prompts to schedule a message to return to your inbox later with a rightward swipe. Either gesture can be reassigned to delete, move, flag, or mark as read/unread. Pressing and holding a message listing opens a bulk editing mode for selecting multiple messages.

One note about Gmail accounts: they work properly in Outlook when accessed via IMAP and I had no trouble there. However, Gmail accounts that are part of the paid Google Apps for Work service also support Exchange ActiveSync, but Outlook for iOS doesn’t support accessing Gmail via Exchange ActiveSync. Microsoft said this is a minor issue, because of tweaks it has made to how Gmail performs via IMAP. For instance, Outlook checks for new messages continually, not at 15 minute intervals, as is often the case in IMAP setups.

You can choose which account to send email from, and you can set a per-account signature, but for those who forward mail into Gmail, for instance, you cannot set an arbitrary return address.

That points out the most notable account-setup limitation: Outlook for iOS lacks an “Other email” option for generic IMAP accounts, which is odd since Outlook for Android does offer such a menu choice (with IMAP configuration options). Hopefully Microsoft will add this to the iOS version soon.

Calendar — As with email, Outlook consolidates calendars from various services, including Google, iCloud, and Yahoo, along with Outlook.com and Exchange ActiveSync. 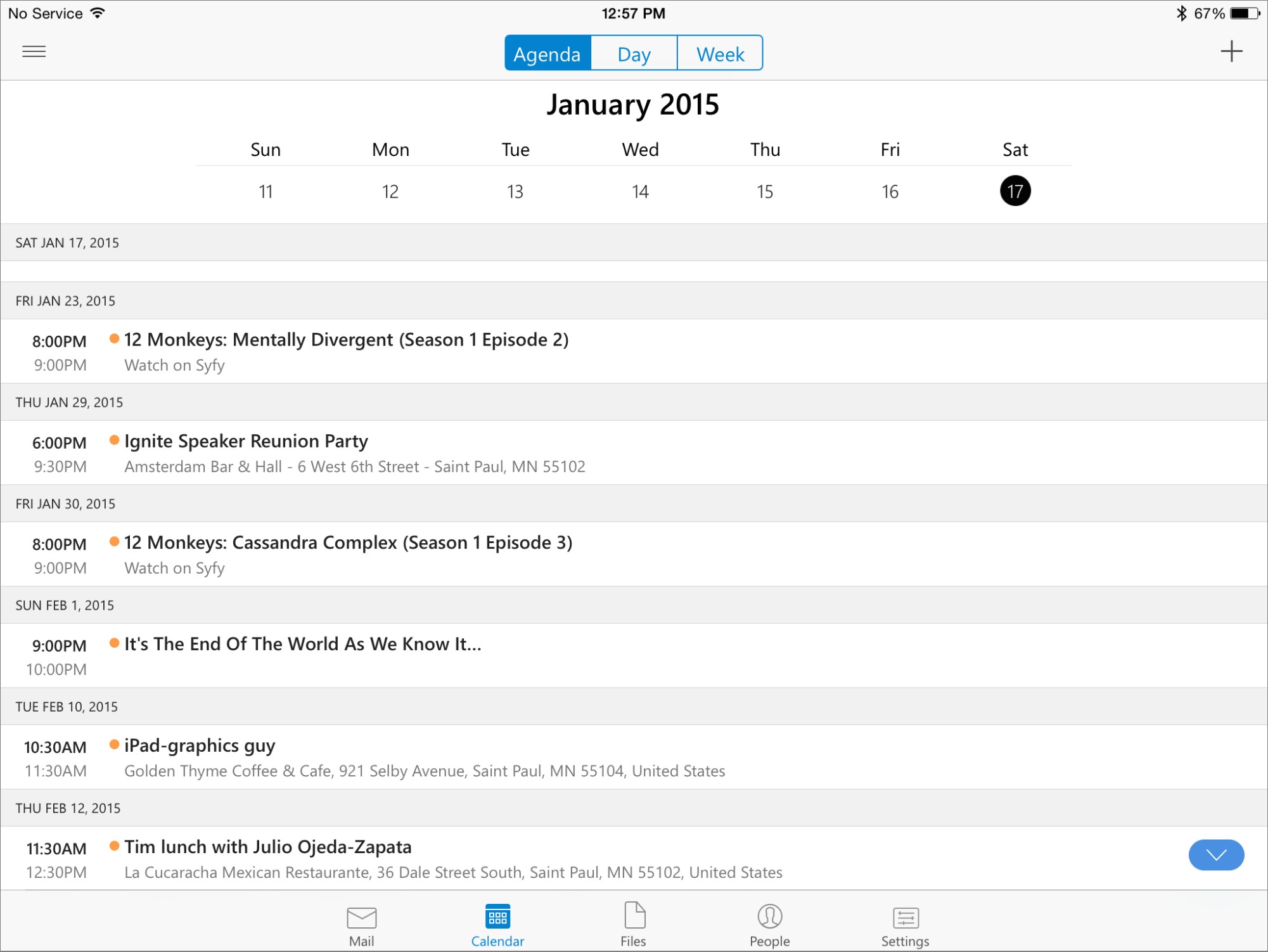 The calendar function is otherwise predictable, with an agenda view, a week view, and a combination day and month view. Events can be assigned reminders, and setting up a meeting is simple enough. Calendar colors are customizable.

Files — This Outlook view got my attention because hunting down files attached to email messages can be a pain. Now such files are shown in their own tidy lists corresponding to each mail service, along with file-storage services Box, Dropbox, and OneDrive. When I configured my Google account, Outlook also added my Google Drive. 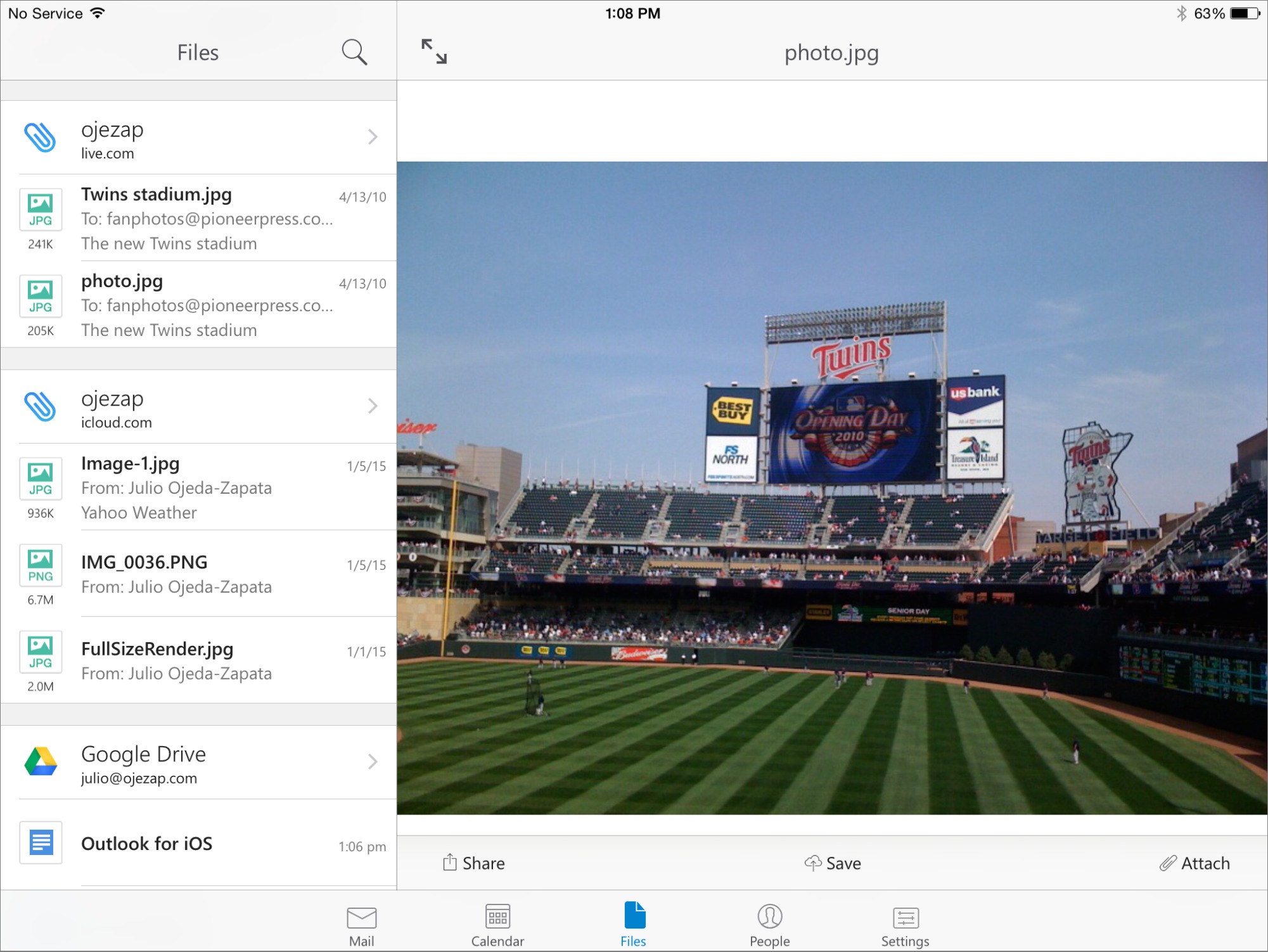 Listed documents can’t be edited within Outlook, but Microsoft gives each mail account the option of attaching files to outgoing messages, sharing them via whatever services the user has configured for that purpose, or saving them to any of the file-storage accounts. Files already in Box, Dropbox, OneDrive, or Google Drive can be shared out or sent as attachments. 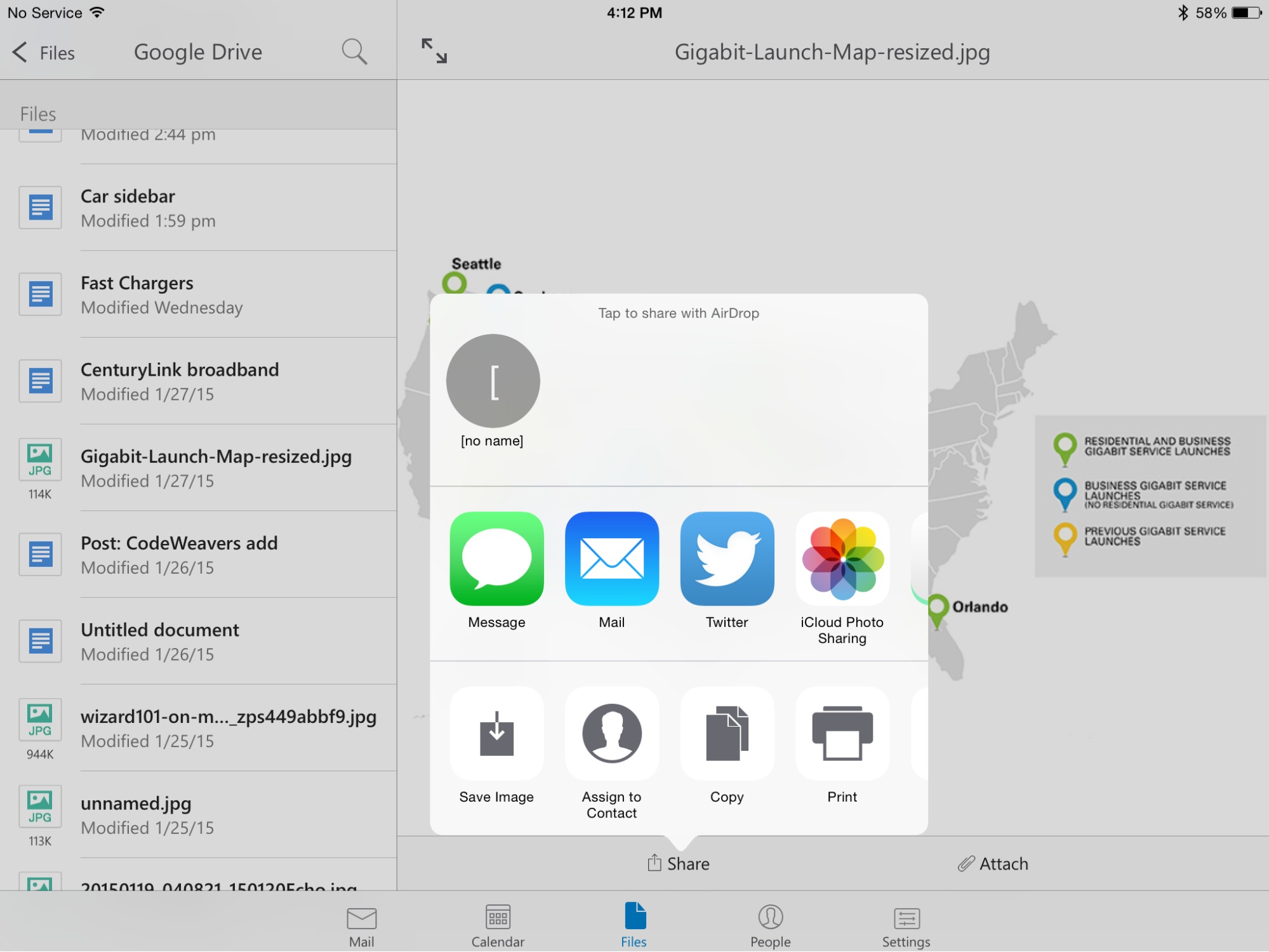 File management is one area where Outlook shines in comparison to Apple Mail, which has no file-only view, and doesn’t let you attach files from, or save files to, the likes of Box and Dropbox. I suspect many people will jump to Outlook for this reason alone.

People — Outlook’s integrated approach carries over to the app’s People view, which lists contacts from each service in its own tidy list, or in a consolidated multi-service view. It’s easy to compose a new message to a person by tapping the pencil button next to that person’s name. 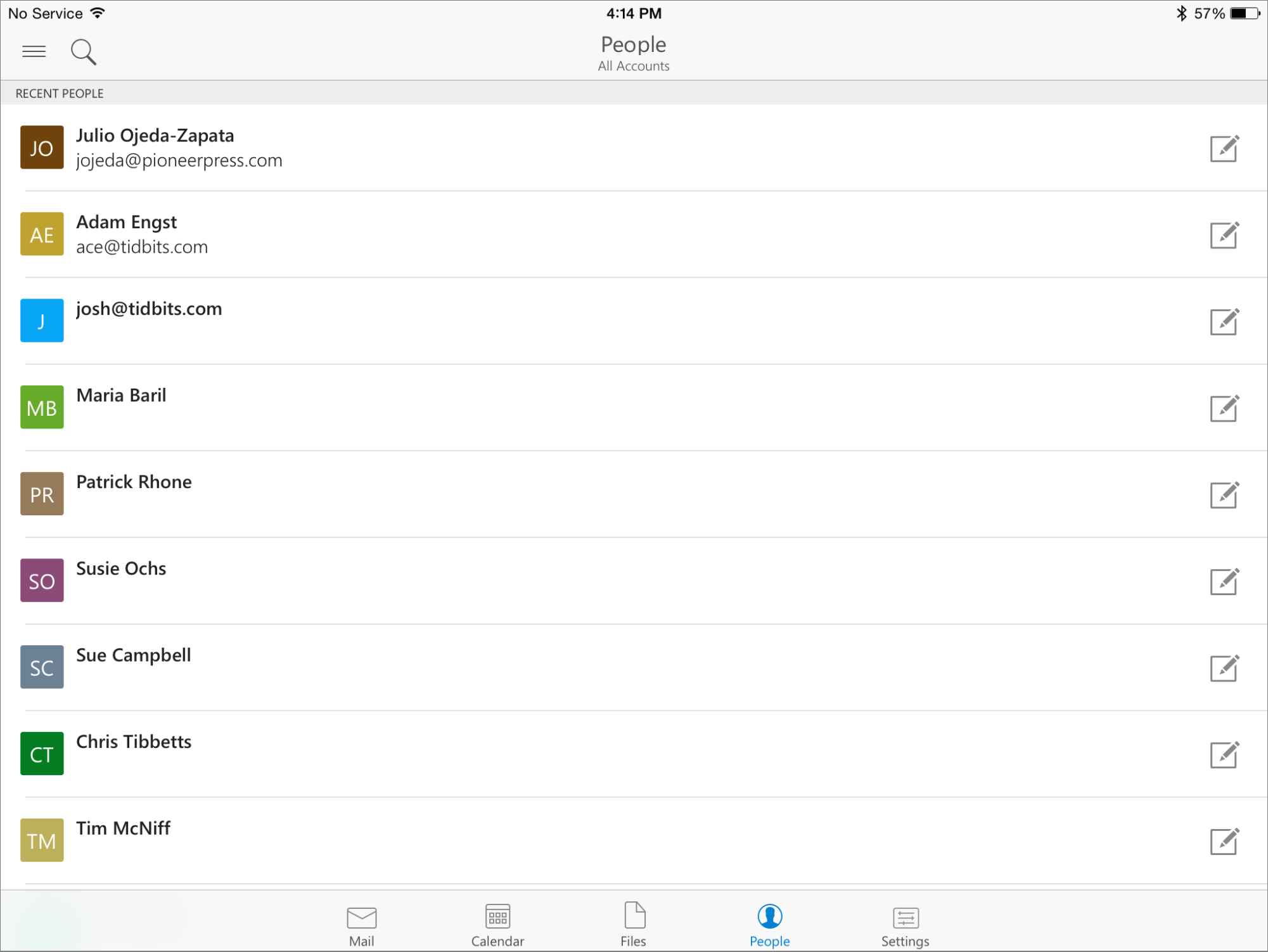 Tap a person’s name and Outlook shows pending meetings and recent file attachments associated with that person, along with recent messages (covering about the last four days). It would be nice if Outlook could expand the scope of the email search, but there’s apparently no way to do that. 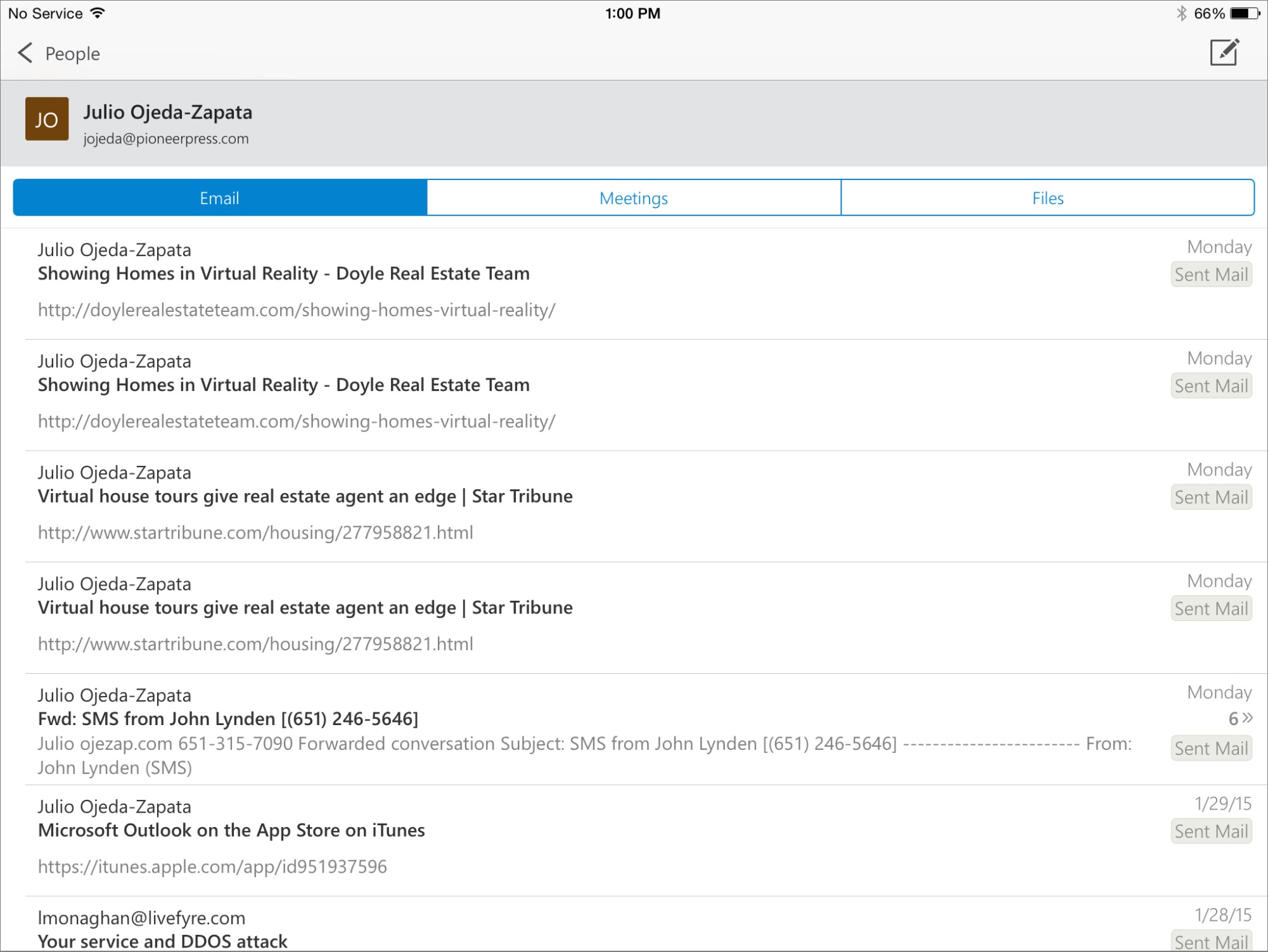 Security Worries — I’ll end with a potential red flag for Microsoft Exchange ActiveSync–focused organizations that are weighing whether to deploy the iOS and Android versions of Outlook.

Security experts have pointed to an apparent flaw in the app that some have considered worrisome enough to halt Outlook’s deployment within organizations using Exchange ActiveSync. Those that have taken this step include the University of Wisconsin and the European Union parliament.

The flaw, discovered by security company Rapid 7, is related to ActiveSync security policies put in place by device administrators to, among other things, prompt device users to create security passcodes.

But, as Rapid 7’s Dirk Sigurdson details, Outlook for iOS and Android ignores ActiveSync policies set up at the server level (apart from Remote Wipe and PIN lock enforcement). He writes:

Your company can define a sophisticated passcode or encryption policy that will have absolutely no impact on devices if this new email client is used by your employees. … If your organization is dependent on ActiveSync policies in any way you should immediately block ActiveSync access to Outlook for iOS and Android.

Microsoft says that the next Exchange ActiveSync policies to be added will be wiping the device after a number of failed password attempts and requiring a PIN after an activity timeout.

Separately, developer and mobile device management expert René Winkelmeyer has expressed concerns about another Outlook design decision held over from the Acompli days. This feature stores user credentials on a cloud service in order to enable Outlook to check quickly for new mail, contacts, and events for accounts using Exchange ActiveSync, iCloud, and Yahoo. It does not store Gmail account credentials, or credentials for accounts that rely on OAuth, like Outlook.com, Dropbox, and Box.

According to Acompli’s security policy, “Each user’s credentials are double-encrypted using a server per-account unique key and then using a client device unique key, therefore the credentials can only be unlocked by the collaboration of both the server and the app at runtime.” A separate Outlook security document clarifies: “This architecture means that in order to gain access to your password, you would have to have access to both our cloud service and have physical access to the unlocked device. This applies to both us as well as anyone who would attempt to gain access from the outside.”

Nevertheless, this a problem for organizations whose security requirements state that their users’ credentials cannot be stored outside of company servers. If you’re concerned about this data storage, removing the account from within the Outlook app offers an option to delete both the account from the device and from the cloud service. 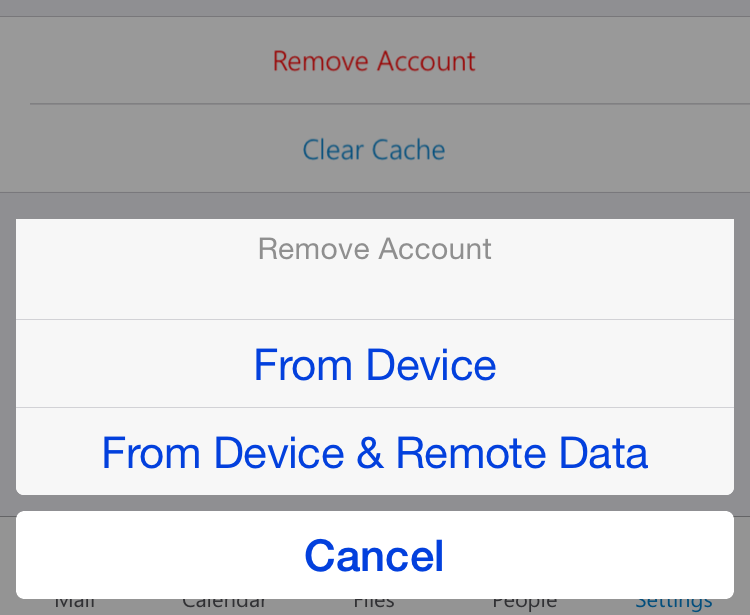 Microsoft has responded to these security concerns with the following statement:

Microsoft values the privacy and security of our customers and we are committed to making Outlook for iOS and Android both loved by users and trusted by IT. That means putting customers in control of their data, both through the design of our products and through transparency on how data is used. We are delivering additional security and management features in the coming months. In the meantime, we’ve provided detailed guidance for IT administrators seeking to restrict use of this app at this time in their organizations.

Bottom Line — In the iOS realm, Outlook has entered a crowded field with dozens of mail and calendar apps jockeying with Apple’s stock apps for user loyalty. But Outlook stands out because it consolidates functions from a number of different apps into a single, simple-to-navigate interface, and because it assembles a variety of email and cloud storage services into an integrated information hub. Its file management features are another big plus.

Large organizations, particularly those dependent on Exchange ActiveSync, may wish to wait until Microsoft has more fully addressed the security concerns before investigating Outlook further. For the rest of us, though, Outlook seems destined to carve out a major slice of the iOS market on the strength of its name and undeniably useful features.