I’m a wannabe “cord cutter,” forever thwarted. I would have canceled my Comcast cable TV service years ago if it were up to me. I am married, though, and my wife has veto power over decisions like this.

She’s hooked on such basic-cable shows as “House Hunters International,” “Love It or List It,” and the suspiciously handsome “Property Brothers” on the HGTV channel. She loves having an on-demand archive of her favorite programs via Comcast’s X1 service, too.

But my case for ditching cable became stronger with a new Internet streaming video service called Sling TV. Aimed squarely at cord cutters, it offers an array of basic-cable channels for $20 per month, with no contractual obligation. No cable or satellite TV service is required (an interesting arrangement, since Sling TV is owned by satellite provider Dish Network).

Do you like sports? Sling TV offers ESPN. How about cooking? Sling TV users get the Food Network and the Cooking Channel. For news junkies, there’s CNN and Bloomberg Television. Kids can load up the Disney Channel, and Spanish-speaking households like mine can watch Galavisión. 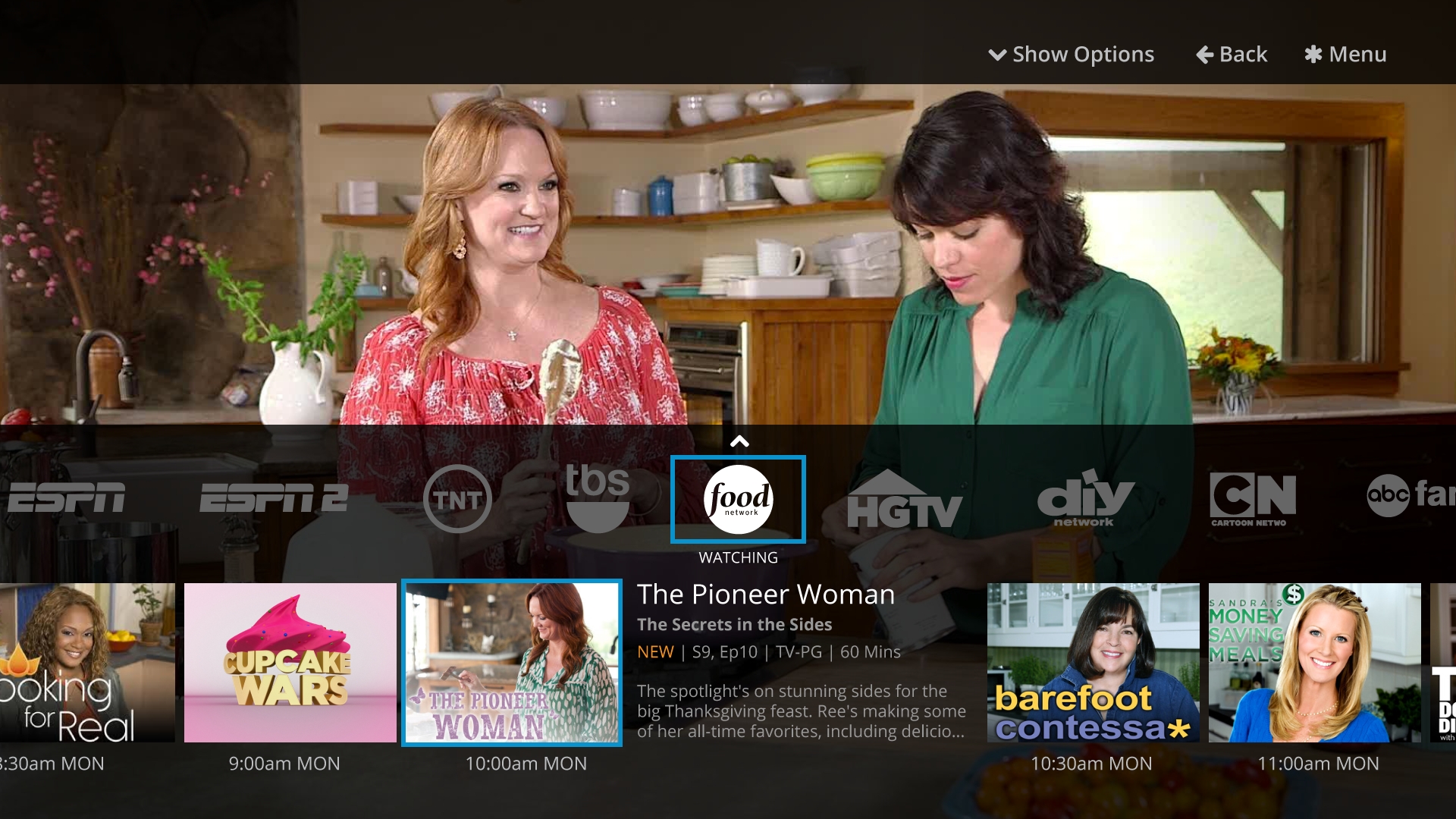 Sling TV has roughly 30 channels, running the gamut from travel and home repair to general-interest programming on such popular channels as TNT and TBS, with more on the way. Sling TV recently announced that it will add AMC, home of “The Walking Dead” and the “Breaking Bad” spinoff “Better Call Saul,” along with Univisión, another Latino channel. And, yes, Sling TV has HGTV for my
wife.

Sling TV also offers add-on channel tiers. For an extra $5 per month, sports fans can expand from ESPN and ESPN2 to a total of 11 sports channels, including the SEC Network and several other ESPN channels. There are also $5 bundles for kids and news junkies. But you are out of luck if you crave Lifetime, A&E, USA, BET, MTV, Bravo, Spike, SyFy, TLC, the History Channel, the Weather Channel, C-Span, Telemundo, Nickelodeon, and many others. 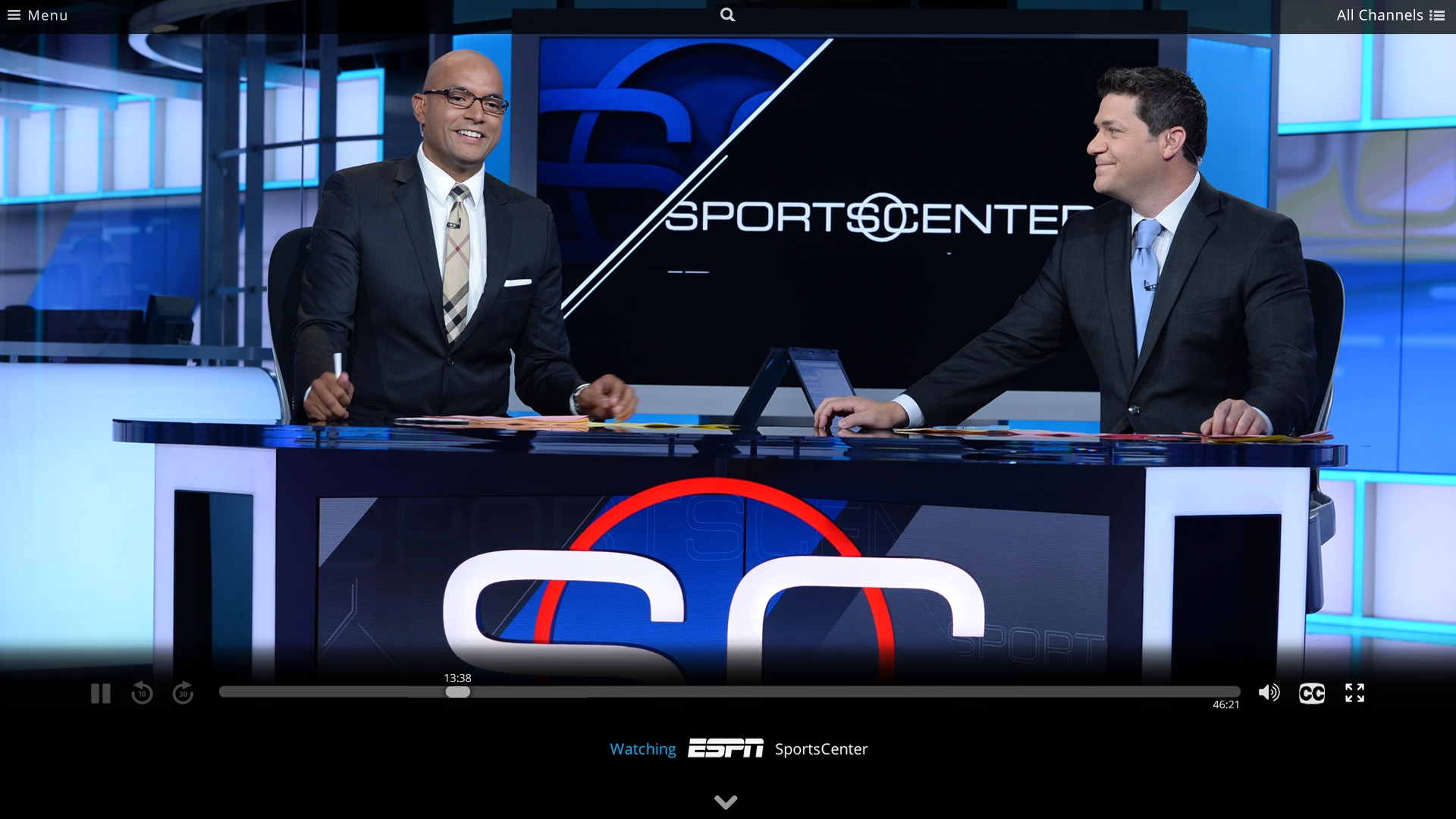 All supported channels are live, just as they are via a cable or satellite provider, and some also include on-demand access to recently aired episodes. CNN is only viewable live, so I can’t record new episodes of Anthony Bourdain’s “Parts Unknown”, but I can watch old episodes of his previous show, “No Reservations,” on the Travel Channel. Live programs can’t be paused, rewound, or fast-forwarded, but archived shows can be. There are no DVR features for recording video for later playback, unlike my Comcast X1
service.

Archived content is limited compared to, say, the on-demand programming available from Comcast (some of it free but much not). While Comcast gives me archives going back seasons, Sling TV provides only recently aired shows.

Sling TV has one major omission: no basic broadcast channels are included. But this is simple to remedy for many people with a rooftop antenna that pulls in those channels in pristine, uncompressed high definition, and for free.

Sling TV also provides a selection of rental movies, such as “Fury,” “Lucy,” and “Guardians of the Galaxy,” much as Google’s Play store, Apple’s iTunes Store, Wal-Mart’s Vudu, and others have long done. As with those others, you pay for films individually; they aren’t included in the monthly fee. No one will join Sling for access to the movies.

But that may change. Sling TV earlier this month said it will soon add the EPIX network with four new channels and 2,000 more video-on-demand titles. The EPIX service will also cost an extra monthly fee, which hasn’t yet been announced.

Best of all, Sling TV is viewable on just about any device.

The service has iOS and Android apps, along with Mac and Windows applications. Users of recent Roku streaming-video TV boxes get access, and Sling TV has just added compatibility with the Amazon Fire TV and Fire TV Stick. Microsoft Xbox One and Google Nexus Player compatibility is coming soon. Devices that are not yet Sling TV-compatible include the Apple TV and Google’s Chromecast streaming stick.

Taking Sling TV for a Spin — I tried out Sling TV on an iPhone 6 Plus, an iPad Air 2, and a MacBook Air with no major problems. I also installed the service on a Windows PC, an Android-based Google Nexus 9 tablet, a Roku 3 streaming box, and both of Amazon’s Fire TV devices. Sling TV generally worked dependably for me, with very little buffering and lag, and only a couple of cryptic errors that forced app restarts.

Sling TV’s interface is nearly identical across the range of compatible computers, mobile devices and TV streamers. It features a basic design with two side-scrolling menus: one for channels and, just below that, another for shows on each channel. This worked reasonably well with both mouse-driven and touch-based platforms, but it felt a bit clunky with the Roku and Fire TV remotes, and the side-scrolling design tested my patience everywhere since I was constantly navigating through dozens of channels. 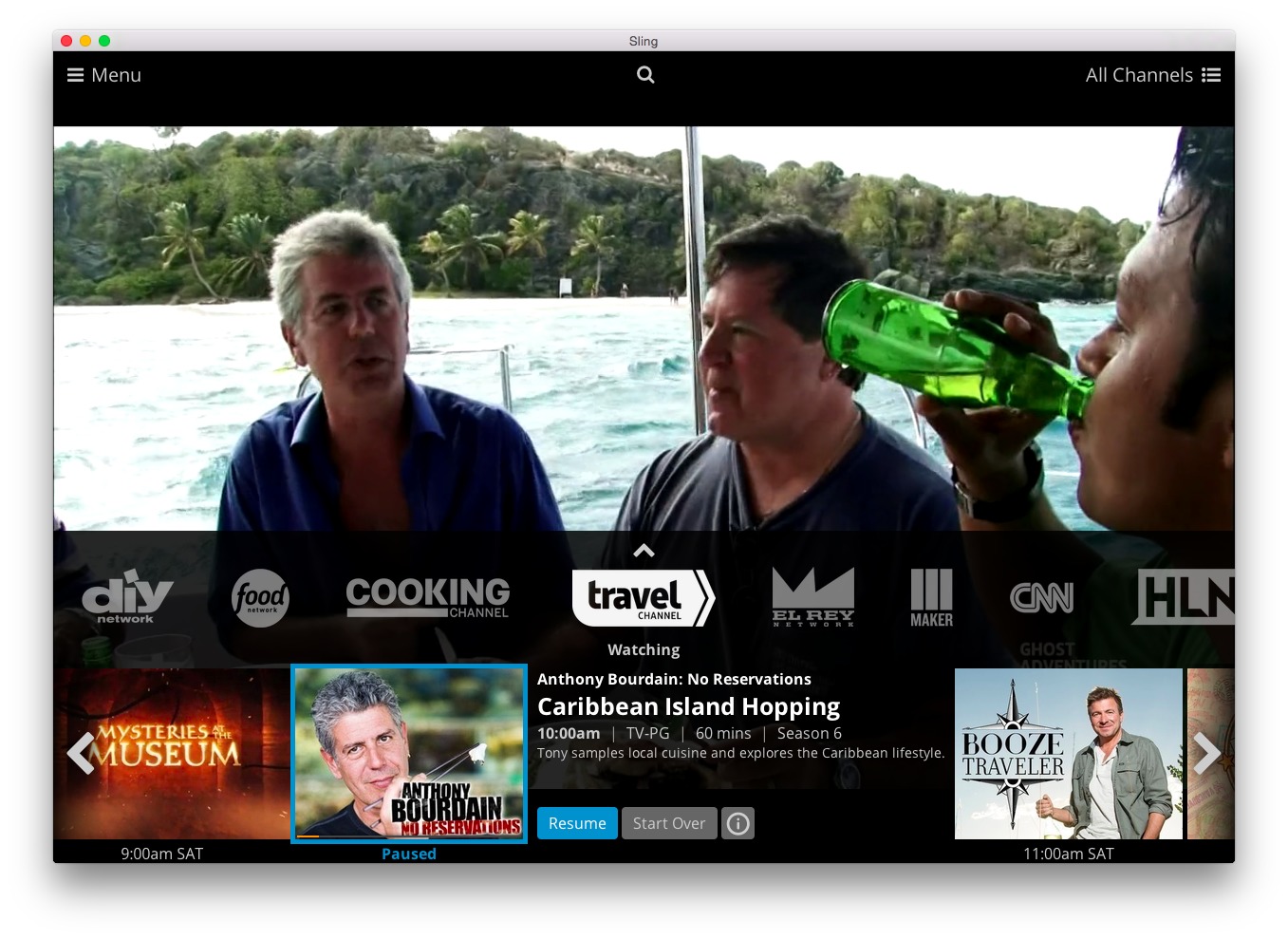 On computers and mobile devices, a drop-down menu on the upper right eased my pain a bit by dividing channels into four categories: sports, entertainment, news, and family. 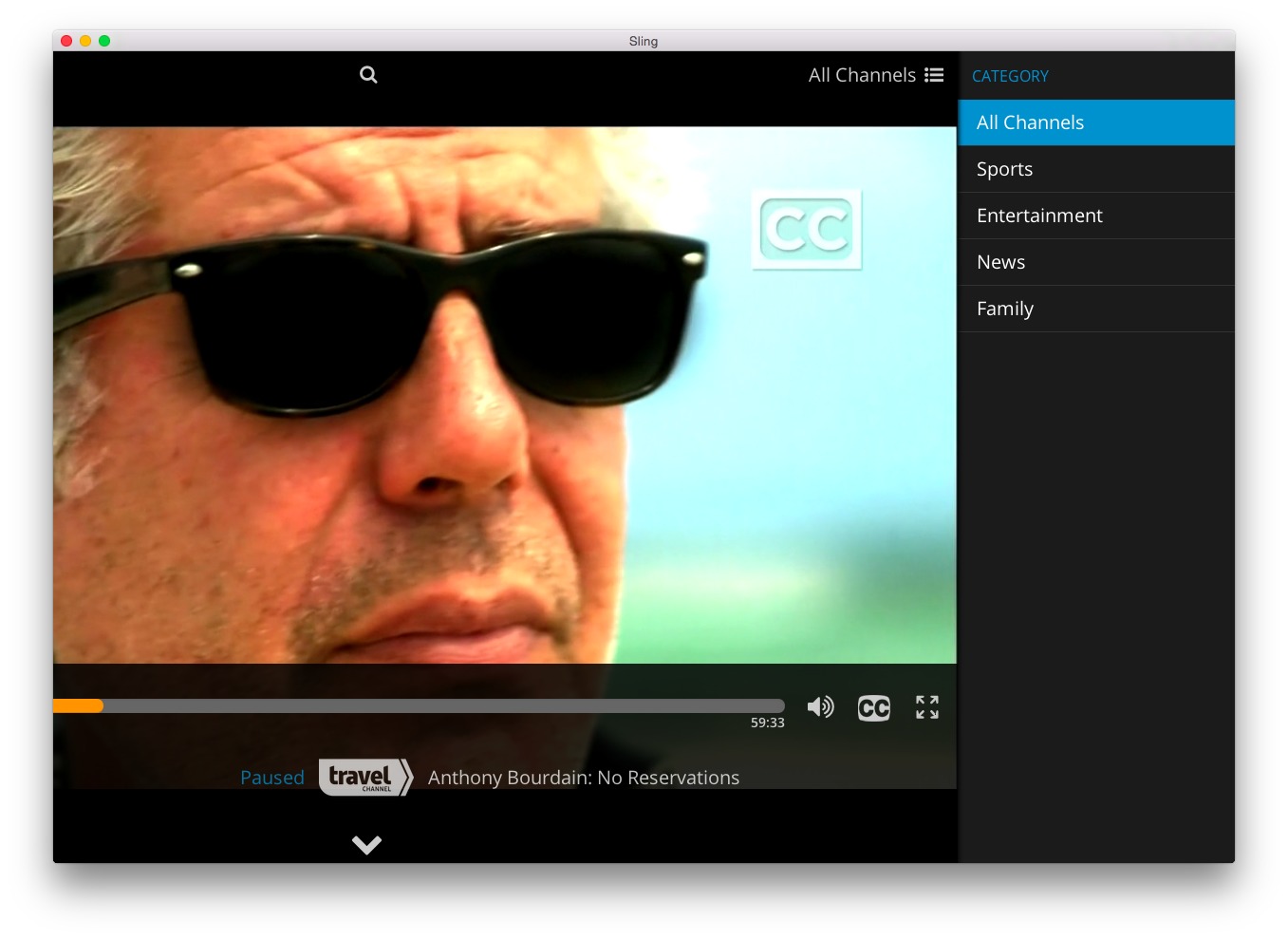 On the upper left there is a second drop-down menu for shifting between Sling TV’s television and movie listings. 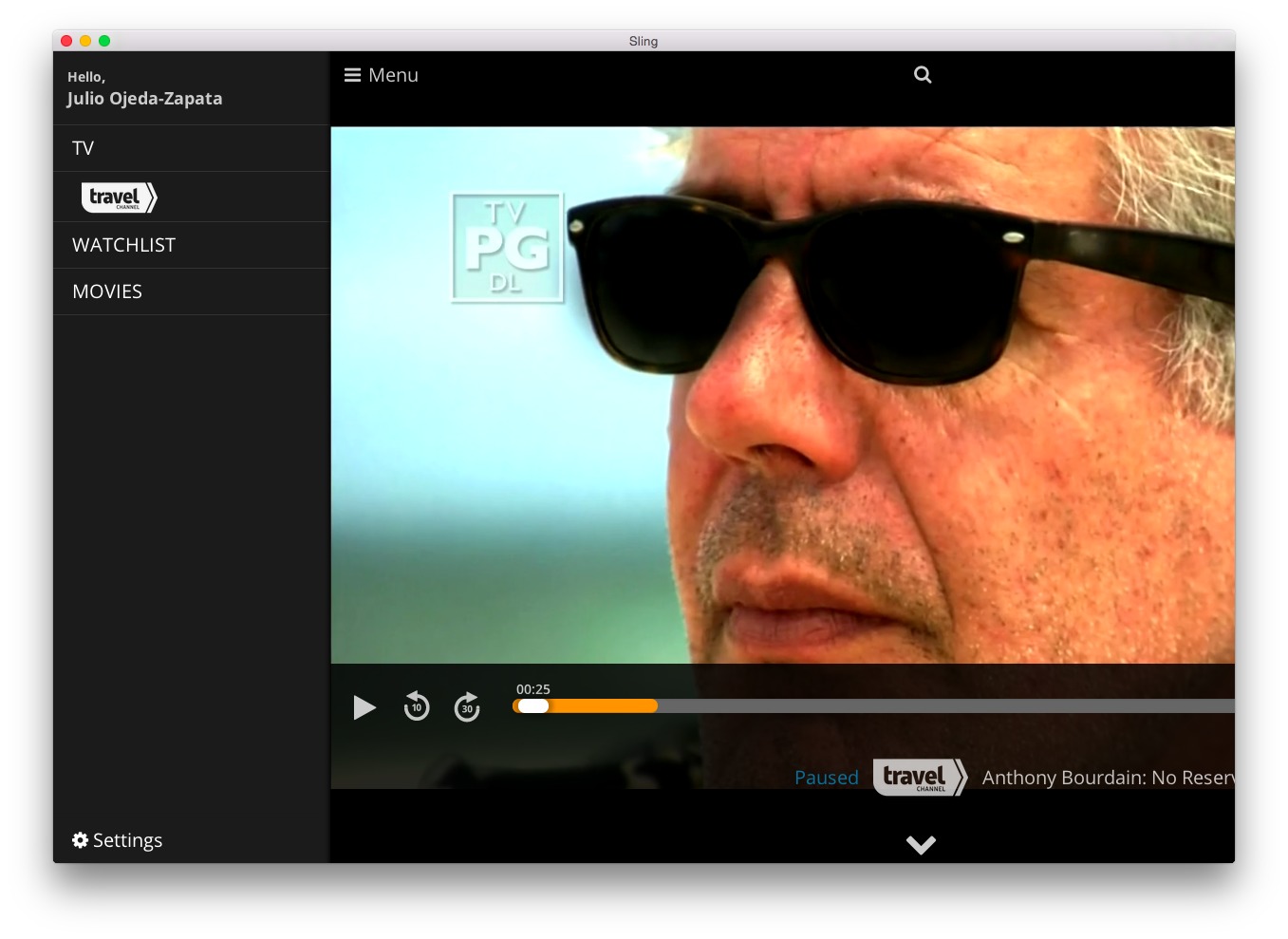 Navigation is slightly different on a TV. On the Fire TV remote, for instance, you tap the menu button to navigate to the movie section, a search engine, and more.

Streaming quality on my computers and mobile gadgets tended to be decent if not HD-pristine via my Comcast broadband and Wi-Fi router. Quality took a hit on my TV, via either Roku or Fire TV, but it was hard for me to tell whether Sling TV or my Wi-Fi network was to blame. I suspect the latter since my living room has tended to be a Wi-Fi problem area and I’ve had trouble with other services too. (That said, TidBITS Managing Editor Josh Centers has also seen poor video quality with Sling TV, even with a wired connection.)

Sling TV is supposed to save your place when viewing a show on one device, so you can pick up where you left off on another gadget later, but I found this to work imperfectly.

I also had a devil of a time remaining logged in to Sling TV on certain devices, such as my iPad and Roku. My multi-device use may have accounted for some of this misbehavior. The service doesn’t allow simultaneous access on multiple devices, so forget about sharing credentials with friends and family, HBO Go-style.

Login problems aside, the iPad Air 2 struck me as the perfect environment for full Sling TV enjoyment with its Retina display, flawless touch interaction, high portability, and nice audio. I suspect Sling TV was conceived with Apple’s tablet primarily in mind. 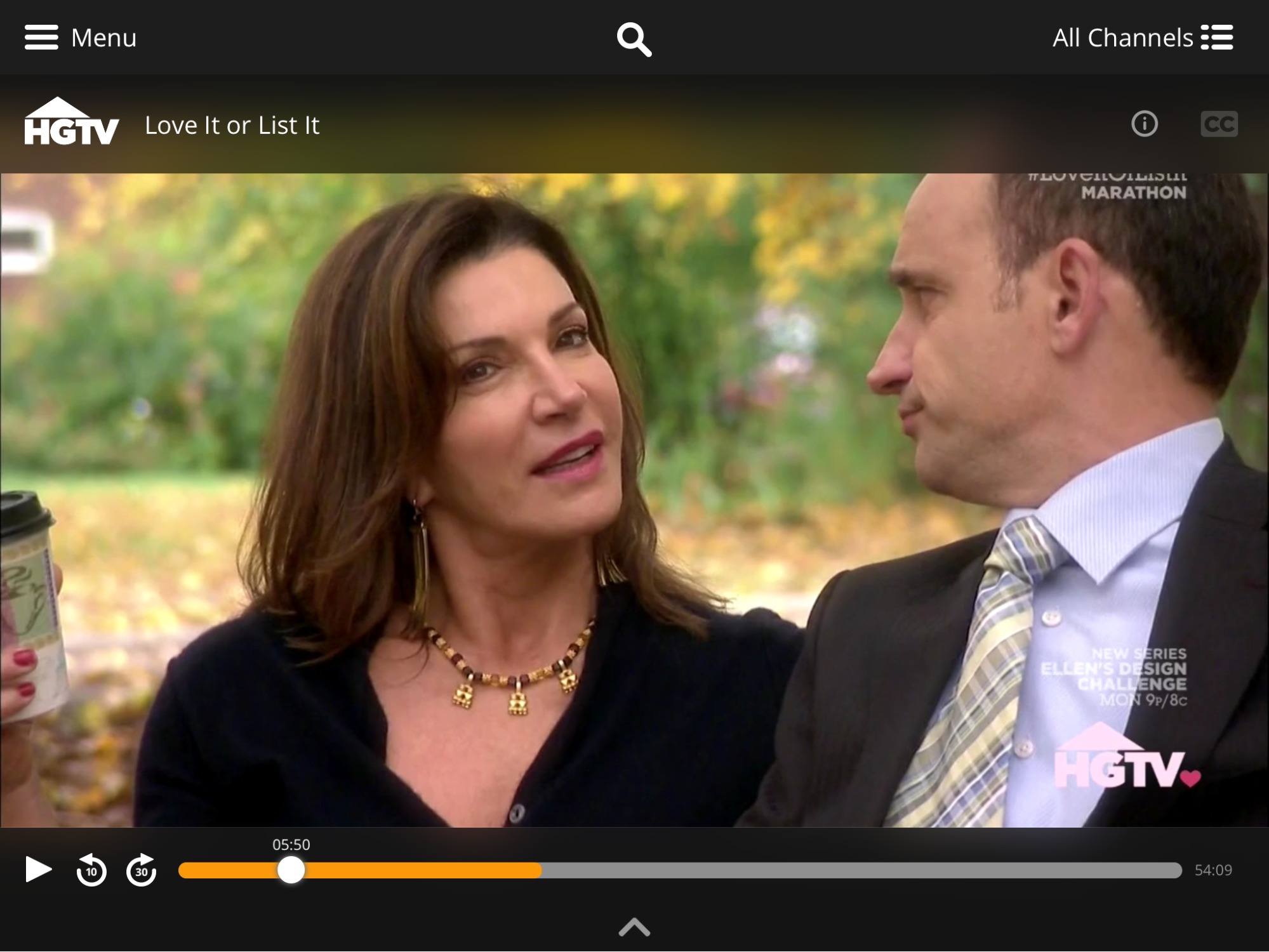 Is It Worth It? — Sling TV is affordably priced at $20 a month for its core channels, and even the $5 add-on bundles are reasonable, but the service has to be a good fit content-wise. If you like the channels the service has, you’ll be tempted to take the leap. My wife and I have no interest in the ESPN channels (the biggest selling point) and its other shows are a mixed bag, so Sling TV is not a slam dunk for us in that regard.

We’d definitely save money, though. Our Comcast bill comes to $175 a month with cable TV, broadband, and telephone service bundled together. If I canceled the cable TV part of the bundle, I’d pay only $70 a month, or $90 with broadband plus Sling TV.

We’d take a hit in terms of features, however, if we threw in our lot with Sling TV. Comcast’s X1 service provides a DVR along with a wealth of on-demand video, a powerful search engine with autocomplete, and movie and TV-episode purchases or rentals, plus pause, rewind and fast-forward for live TV.

Sling TV doesn’t compete well with Comcast X1 at any level other than price. It has no DVR options, a weak search engine, clunkier navigation, and much less on-demand content. When push comes to shove, my wife is more than willing to pay more for Comcast’s superior service, and so we will keep doing so. How that comparison works out for you, only you can say.

But, as I said earlier, I would have canceled cable a long time ago if it were just up to me, and that was before Sling TV came on the scene. Sling TV makes the cord-cutting scenario all the more alluring, and I’m sure many others will feel the same way.

Comments About FunBITS: Sling TV Is Made for Cord Cutters