I’ve lived most of my life in the Los Angeles area, and although L.A. is a sprawling diverse megalopolis, it’s also an insular industry town, with the industry in question being what we Angelenos refer to as “The Industry”: that is, show biz (it’s like no business — I know!). In fact, I am so much an Angeleno that the undergraduate degree I received from UCLA in the mid-1970s was for Motion Picture/Television Production, with an emphasis on screenwriting.

The screenplay format in use back in my student days had remained unchanged since the advent of talking pictures: scene openings had a distinct typographic look, as did action descriptions, scene transitions, and dialog. This format required a deft hand with a typewriter’s tab function, since almost every screenplay element had its own indentation. 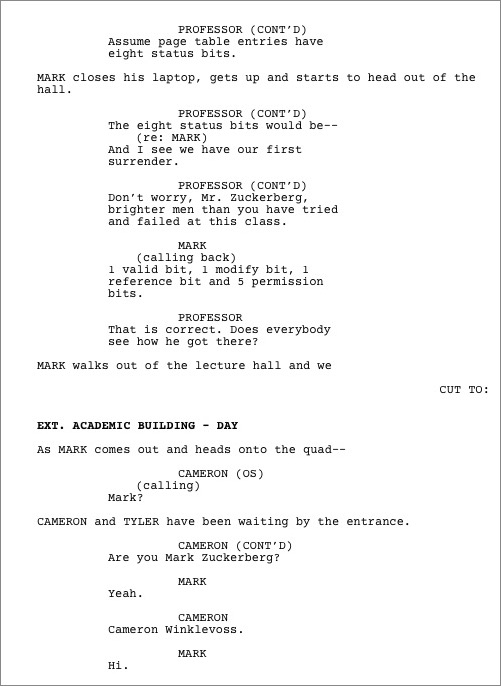 Amazingly, despite all the changes in today’s digitally mediated twenty-first century, the screenplay format remains the same, down to the requirement that the text be in a standard monospaced typewriter font — not, in fact, merely an arbitrary nod to tradition but a practical requirement. As it turns out, a typical screenplay page, properly formatted, often (though certainly not always) works out to about one minute
of screen time. And, in the movie business, running time is money!

More importantly, though, screenplay format is designed for easy reading, annotation, and skimming rather than for the economical use of paper or ease of data entry. It features plenty of space for handwritten notes, and it makes all of a script’s elements visible at a glance. However, unfriendly as the format was to typewriters back in my youth, it is just as unfriendly to word processors today.

Luckily, even though most general-purpose word processors are not designed to support screenplay format effortlessly, computers still make the task of writing a screenplay much easier. Here’s the trick: you don’t need to write in the rigid screenplay format to produce a properly formatted screenplay! Instead, you can defer the formatting until later: back in the day, for example, I used to draft my scenes on a yellow pad by hand and only type them up, in proper format, when they were done. Today, I can compose them in any text editor without worrying about format and have them laid out in proper format later. All I need to do is obey a few simple rules as I write. And what is the source of these rules? A markup system known
as Fountain.

Similar to, and inspired by, the Markdown syntax developed by John Gruber (itself inspired by Ian Feldman’s setext format created with Adam Engst for TidBITS back in 1992), Fountain text can be written with any text editor and then run through a simple converter to produce a formatted screenplay. And, even more so than Markdown, the Fountain syntax is easy to remember and uncluttered, so the text is easy to read and to understand even before it is converted to standard screenplay format.

For example, in a screenplay, scene headings nearly always consist of a single line, in all caps, indicating whether it is an interior or exterior scene (important when budgeting a production) and whether it is day or night (a detail your cinematographer and key grip really want to know). Dialog begins with a character’s name, again in all caps, centered on a line by itself, followed by the speech itself, in a narrow column below the name (possibly prefaced by a parenthetical performance instruction) — easy for an actor to find when skimming the script, and easy for an actor to read when running lines. Transitions, like scene headings, are also in all caps, but they are usually right-aligned, again to make them easy to spot. 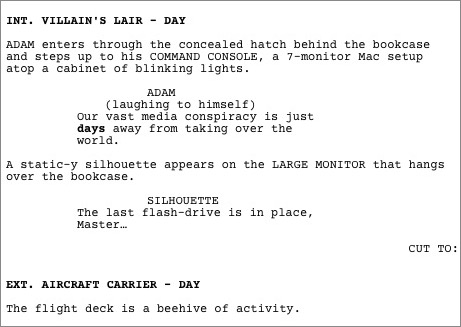 As it so happens, the rigid format turns out to be a boon to the Fountain markup syntax. Take scene headings: they nearly always begin with a key abbreviation, usually INT or EXT, so any line in all caps beginning with one of those abbreviations is easily identifiable as a scene heading. Similarly, dialog is always headed by a character’s name, again in all caps, so any line consisting only of an all-caps word or two (that isn’t INT or EXT) can be identified as the beginning of a dialog
section. Transitions are also in all caps, and they end with “TO:”, so any line of all-caps text ending in “TO:” is considered a transition instruction. And other text? By and large, that is treated as an action description.

As a result, the Fountain version of a scene usually has almost no special extra formatting markup to distract the writer (and, trust me, writers yearn for distractions) — the Fountain text already looks much like a screenplay, just one that is left-justified throughout. 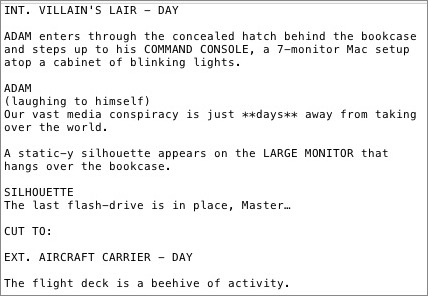 The Fountain syntax, of course, has additional features for adding notes, overriding default formatting (so you can have a character named INT if your screenplay about C compilers requires it), marking deleted passages, and so on. But nearly all of those features are exceptions. Generally, you can learn the Fountain syntax rules you need most often in a matter of minutes, and then you can write your masterpiece with any text editor or word processor
you have handy, whether on a Mac, an iPad, an iPhone, or any other digital device that lets you compose plain text documents.

But what about converting the plain text Fountain documents you create into a properly formatted screenplay? Fortunately, that is not much of a problem either: there is a bevy of apps (including such writer-oriented apps as Literature & Latte’s Scrivener) that can handle Fountain markup, and you can even find Web apps, such as AfterWriting, that can convert Fountain text into screenplay format. There are also apps designed specifically to use the Fountain format, such as Quote-Unquote Apps’ Highland and its companion iOS app for viewing Fountain
files, WeekEnd Read. (I’ll take a closer look at these two in a forthcoming TidBITS article.)

Of course, professional screenwriters with a movie or two under their belts can afford several hundred dollars for high-powered apps like the industry-standard Final Draft to compose their next Oscar-contending script. But for the waiter/barista/screenwriter-about-town hoping to break in to The Industry, Fountain provides an easy low-cost entry to the craft.

(By the way: why the name “Fountain”? It’s a reference to Fountain Avenue, a stretch of road that runs right through the heart of Hollywood.) 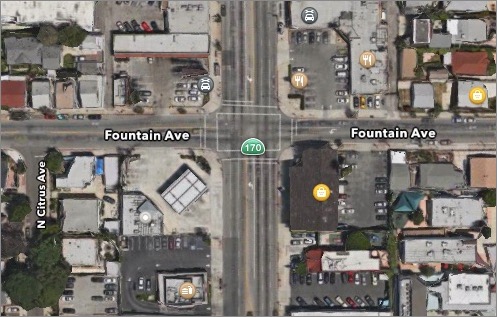 Comments About Formatting Screenplays with Fountain