Broadcasting live video on the Internet isn’t new. Neither is tweeting a link to a live streaming video. But put those two together in a simple package, and you have something that might just be revolutionary. That’s Meerkat, described by its founder as a “live video button for Twitter.”

Personal Broadcasting — The free Meerkat app for iOS 8 makes it easy to stream live video from your iPhone or iPad to your Twitter followers. Just install the app, link it to your Twitter account, and tap Stream. Video from your device’s camera is instantly broadcast to the Internet, and Meerkat sends a tweet from your account with a link to the stream.

If you enter a description of the video before streaming, that will be included in the tweet. For instance, I ran a Meerkat stream called “Taking Your Questions,” where I answered random questions from people on Twitter.

Since your Twitter followers have to join the stream while it’s live, you can schedule a Meerkat stream instead of starting one without warning. When you schedule a stream, Meerkat posts a tweet with the time the stream is supposed to begin. When the time arrives, you receive a notification on your device. As soon as you open the notification, the stream begins and a tweet is posted with a link to the video.

While broadcasting, you see what’s being displayed to your viewers, along with their comments, overlaid with a button to reply to them on Twitter, plus buttons to activate the flash, switch between the rear- and front-facing cameras, and stop the video. Not surprisingly, typing to reply doesn’t work so well unless the iOS device is in a fixed position and you’re using an external keyboard. 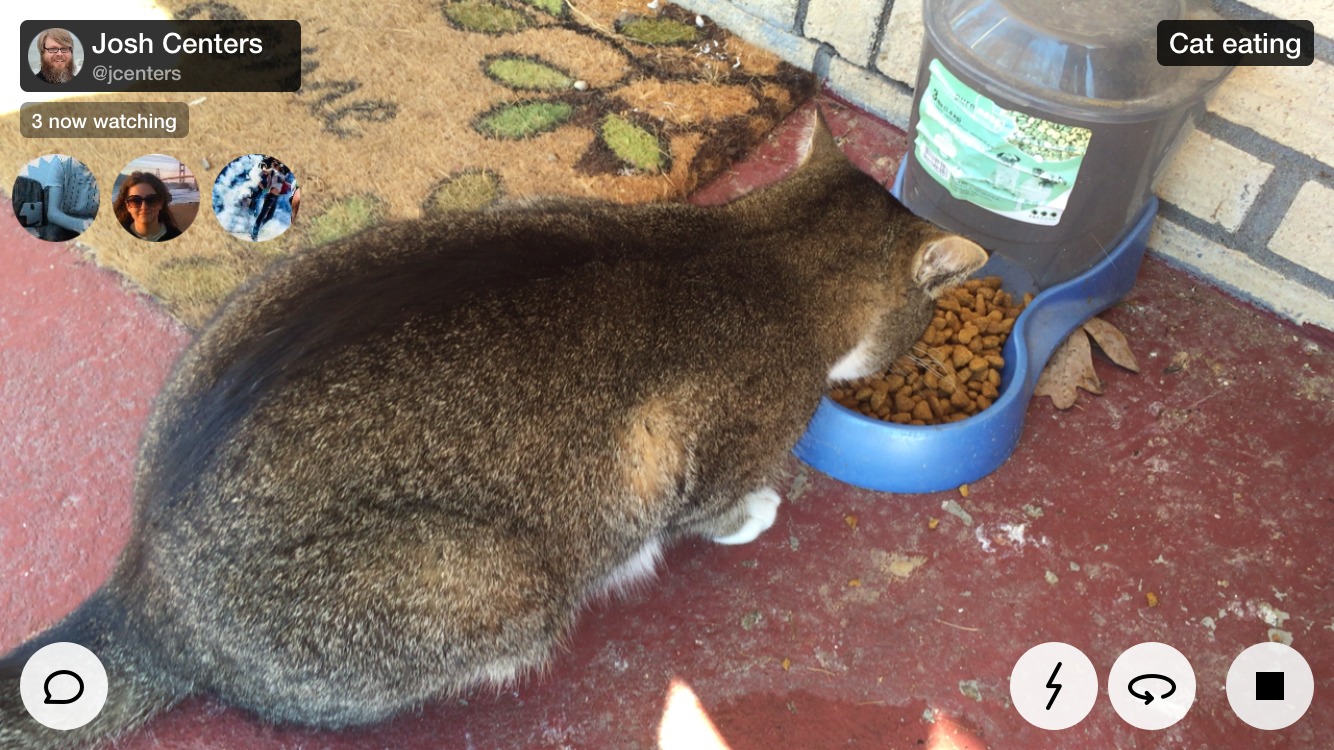 As soon as you tap the Stream button, you’re live on the air, streaming from the device’s rear-facing camera. It’s unfortunate that there’s no option to set things up before the stream starts. Since I often want to address my viewers face-to-virtual-face (and spare them my messy desk), I cover the rear-facing camera with my hand when I start the stream, and switch cameras quickly after it starts.

Before you ask, no, your videos are not automatically saved to some cloud service, although you can save a copy of the finished video to your device. That’s freeing, since it gives you some leeway to express yourself without worrying about a flub going viral. (Of course, as with people taking screenshots of Snapchat, there’s nothing stopping someone from recording you with QuickTime Player.)

500 Million Channels and Nothing On — How would you find Meerkat video to watch, if none of your Twitter friends use it yet? To get started, search Twitter for “#meerkat LIVE” and browse around a bit. To avoid relying on searches or serendipity to know when others are broadcasting, you can follow other Meerkat users, and the app notifies you when one of them begins streaming. Streams can be viewed either in a Web browser or in the app itself.

Until recently, Meerkat would also notify you if someone you follow on Twitter began broadcasting. But Twitter has taken away Meerkat’s access to Twitter’s social graph, just after Twitter announced that it has purchased competing service Periscope. This is incredibly poor behavior on Twitter’s part, especially since apps like Meerkat are exactly what Twitter encouraged developers to create, after the company crippled third-party clients. The message Twitter is sending is: if you develop
something cool with our platform, we will steal it and then cut your product off at the knees.

Viewing Meerkat streams has some rough edges. If you view a stream by clicking a link on Twitter, it works reliably in your Web browser, though you must first log in to Twitter. However, viewing from the app itself is hit or miss. Opening a notification often takes me to the Web stream, instead of the Meerkat app. 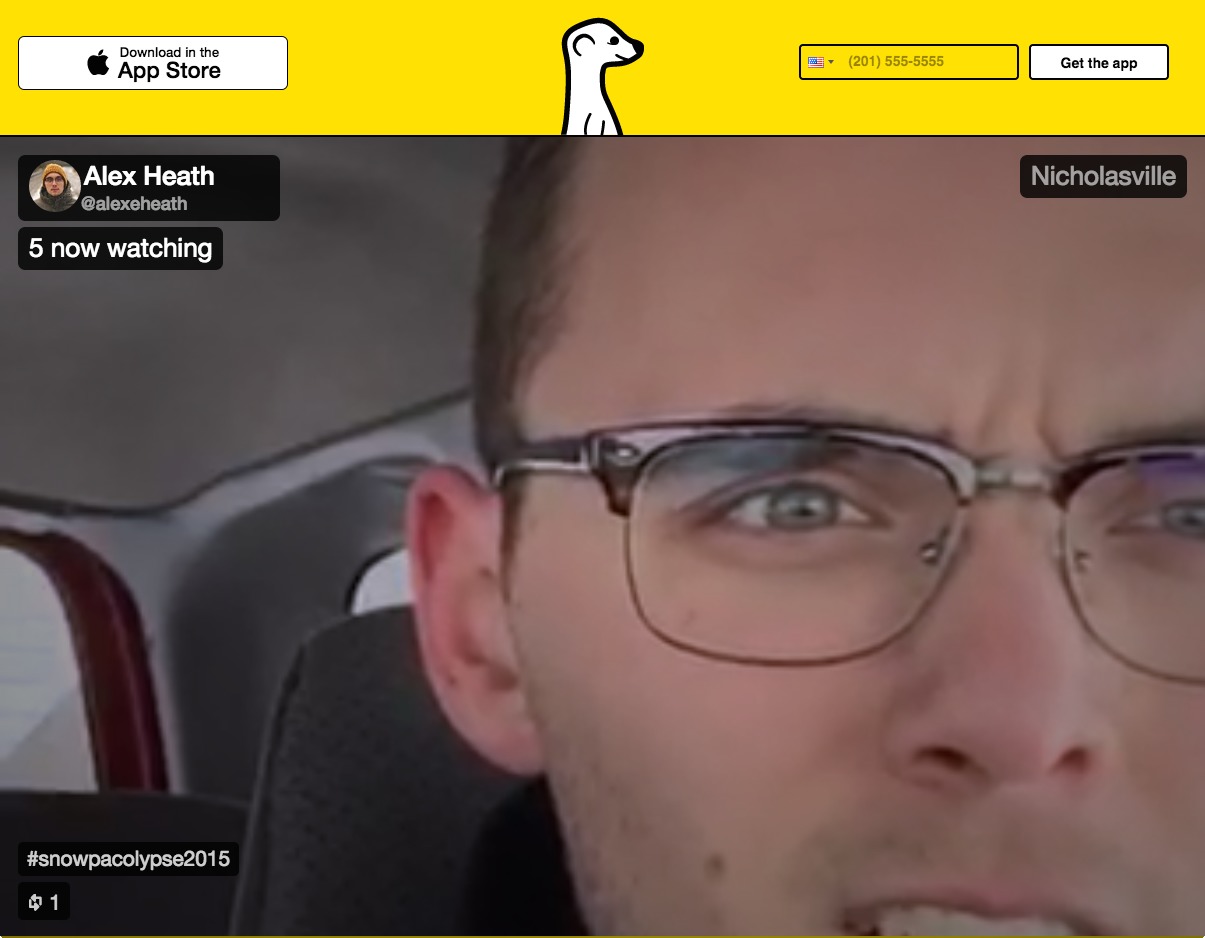 While you’re watching a stream in the app, Meerkat shows you the video, overlaid with bubble portraits of who’s viewing the same stream, as well as Twitter comments from viewers. There are also buttons to comment on the video (which uses Twitter’s @replies), retweet the video, favorite the video, and return to the home screen. 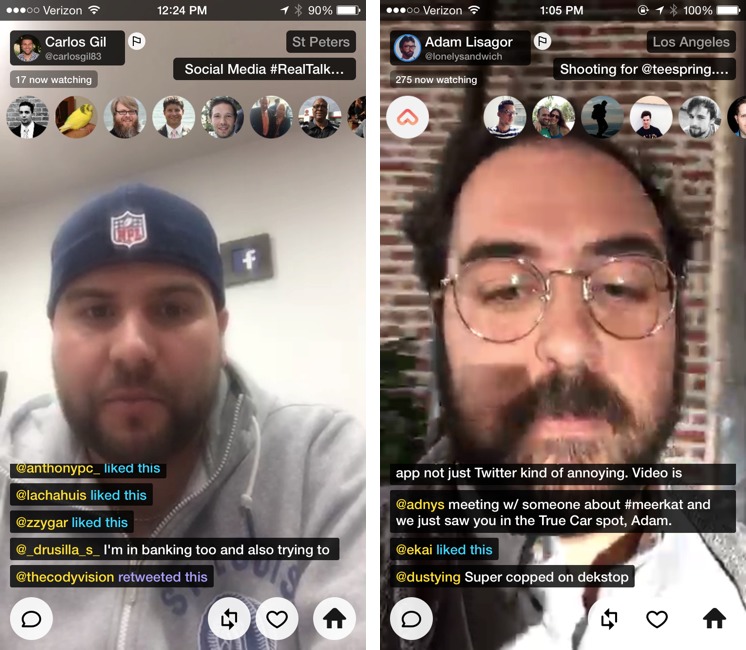 Pondering the Possibilities — Meerkat is such a simple idea, but it is exploding in popularity, at least if the constant notifications I receive about people I follow on Twitter joining are any indication. It has the potential to revolutionize journalism and broadcasting. You could use it to cover a protest, broadcast a city council meeting, or even stream an event for family members, like a graduation. For more active video, you might want something like a Hitcase or Velocity Clip. Of course, it could be used for uh… adult entertainment, and nothing in the rules precludes this.
Thankfully, and almost surprisingly, I haven’t stumbled across anything yet that required eye bleach. 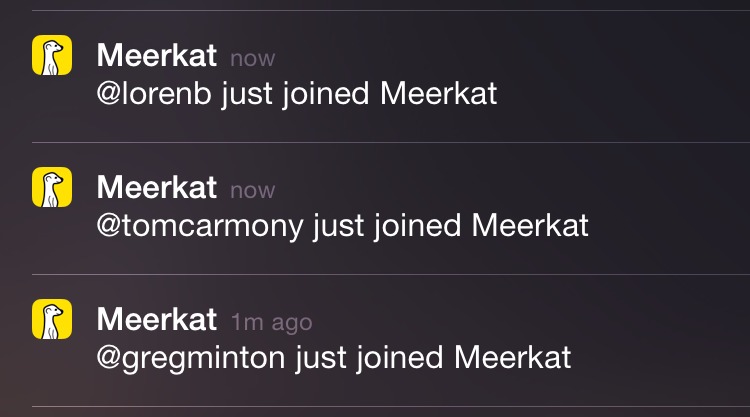 What makes Meerkat so appealing is that it’s not just a platform for streaming video, but also for promoting it. But that has the potential to backfire, especially in these early days when many users are just giving it a spin. Many Meerkat users will launch a stream for only a few seconds, so that by the time you click on it, it’s already over. Promote something worthless and no one will give you a second chance.

If Meerkat is to last, and not become a flash in the pan like social media service Ello, the community needs to develop some conventions and etiquette around streaming so viewers know what they’re going to see, when they’re going to see it, and how long it will last.

If you do want to dip your toe into Meerkat, here are a few suggestions for broadcasting successfully:

Meerkat could make some changes that would help with these points. There needs to be a test or “setup” mode so broadcasters can prepare before going live. Also, Meerkat should have an option to tweet when the stream is finished and delete the original announcement tweet.

Regardless, Meerkat has a lot of potential, and if the community ends up using it in useful and interesting ways, it could become a significant force in democratizing broadcast video.