Contact management is not generally an area so exciting that you need to have smelling salts handy, but even I, with my modest needs, admit that Apple’s own solution, the Contacts apps in iOS and OS X, falls short in places. Fortunately, the folks at BusyMac, not content with creating their own Calendar replacement in the form of the excellent BusyCal, have now moved on to tackle the contacts part of the equation with the $49.99 BusyContacts.

You may not need everything BusyContacts can do, because it’s a lot. But if you’ve felt limited by Apple’s Contacts (or just hate its interface, as TidBITS publisher Adam Engst does), BusyContacts might fill some of the gaps you’ve encountered. In particular, if you need to share contacts among a group of people, say, in a small business, or if you need to log and manage your interactions with people, then BusyContacts is likely what you’re looking for.

I don’t need to avail myself of every feature BusyContacts has to offer, but there are enough niceties and improvements over Apple’s Contacts that I’ve pondered whether I might be better off switching.

Fortunately, it’s not an irreversible, or even a mutually exclusive, decision. BusyContacts essentially piggybacks on OS X’s built-in contact database, so you don’t need to do anything other than authorize it to slurp up your existing contacts. And any changes made in BusyContacts are reflected in Apple’s Contacts (assuming there’s an analogous field).

But BusyContacts also goes beyond integration with Apple’s own internal contacts. As with the built-in Contacts app, you can also grab data from services like Google, Yahoo, and Office 365, as well as any Exchange or CardDAV server. Plus, as this is the era of social networking, it can also download your contacts from Twitter, Facebook, and LinkedIn, if you so desire.

Seeing contacts from all of those different services can be confusing, though like Apple’s Contacts, BusyContacts lets you link cards on different services that belong to the same person. So, for example, rather than seeing separate entries (top screenshot) for John Smith from Facebook and John Smith from your Google Contacts, you instead see a combined version (bottom screenshot) that shows the contact details for both. (Linked contact details are not permanently merged, though if you want to do that, it’s possible too.) 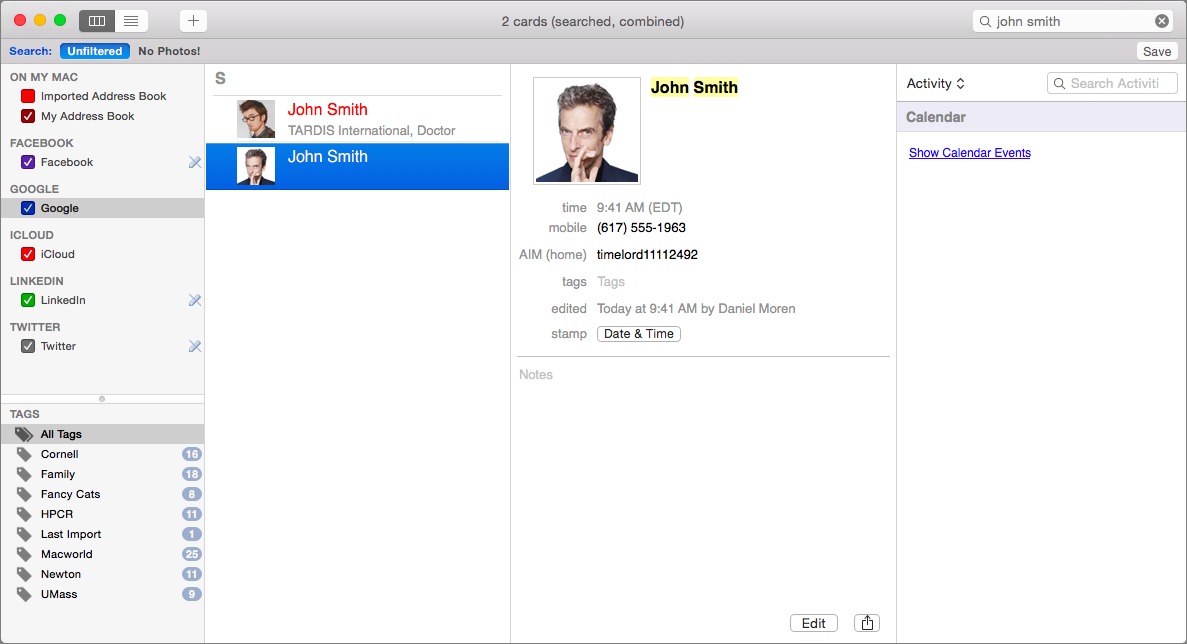 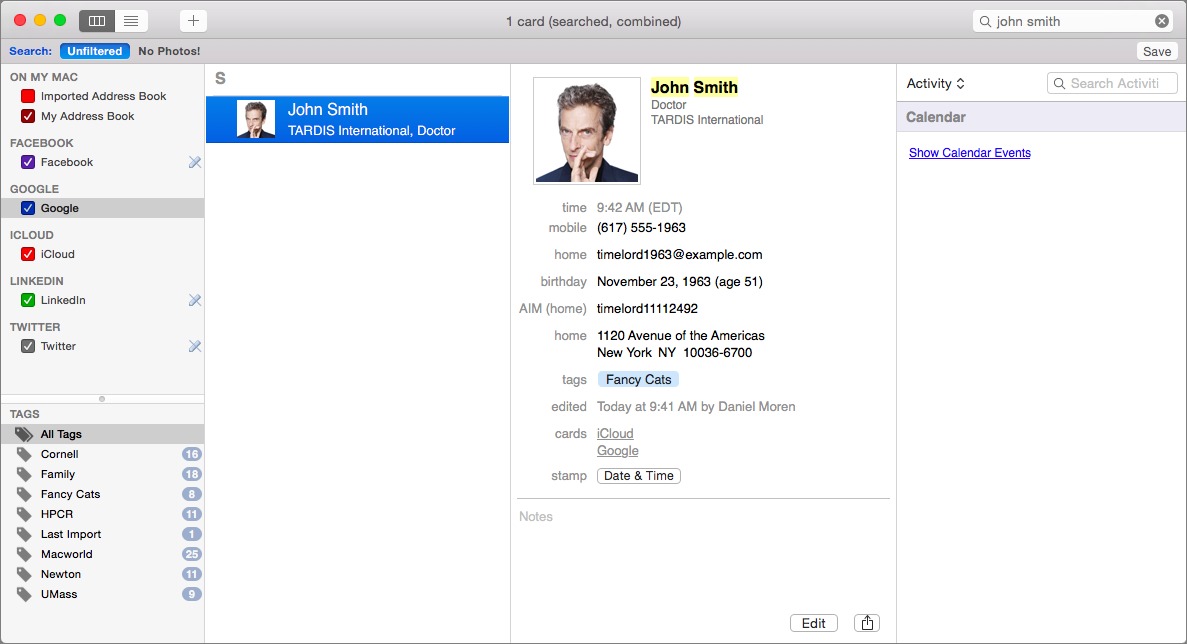 I particularly appreciate that BusyContacts lets you color-code those various accounts, so you can quickly see at a glance which account the information comes from. That carries over to an even more granular level: when you edit a card, icons next to the various entries tell you
if the data comes from a social networking service and, if so, which one.

It’s a bit odd to integrate Twitter into my contacts, in part because not everybody I follow on Twitter is someone I actually know. It’s surreal when scrolling to find celebrities like Nathan Fillion and Neil Gaiman sitting next to my mom and my former boss.

That’s one place where BusyContacts’ useful filtering and tagging tools come in. Tags work essentially like groups in Apple’s Contacts, whereas filters are the equivalent of Smart Groups, letting you specify a set of criteria and then quickly view just the contacts that match them. But BusyContacts’ filters are far more powerful: for one thing, Apple only lets you create Smart Groups where a card matches a single criterion. BusyContacts supports multiple conditions, and you can see cards that match any, all, or none of them. It also lets you match on factors that Contacts doesn’t, so, for example, I can
filter to see just those contacts that don’t have an associated picture.

Another of BusyContacts’ standout features is the Activity List. It links to other apps and services to give you an overview of your interactions with the selected contact, showing you related info from calendar events, email messages, Twitter and Facebook updates, and Messages. That makes it easy to search through that correspondence and remind yourself where you’re having dinner tomorrow night, or the last time you corresponded with someone. 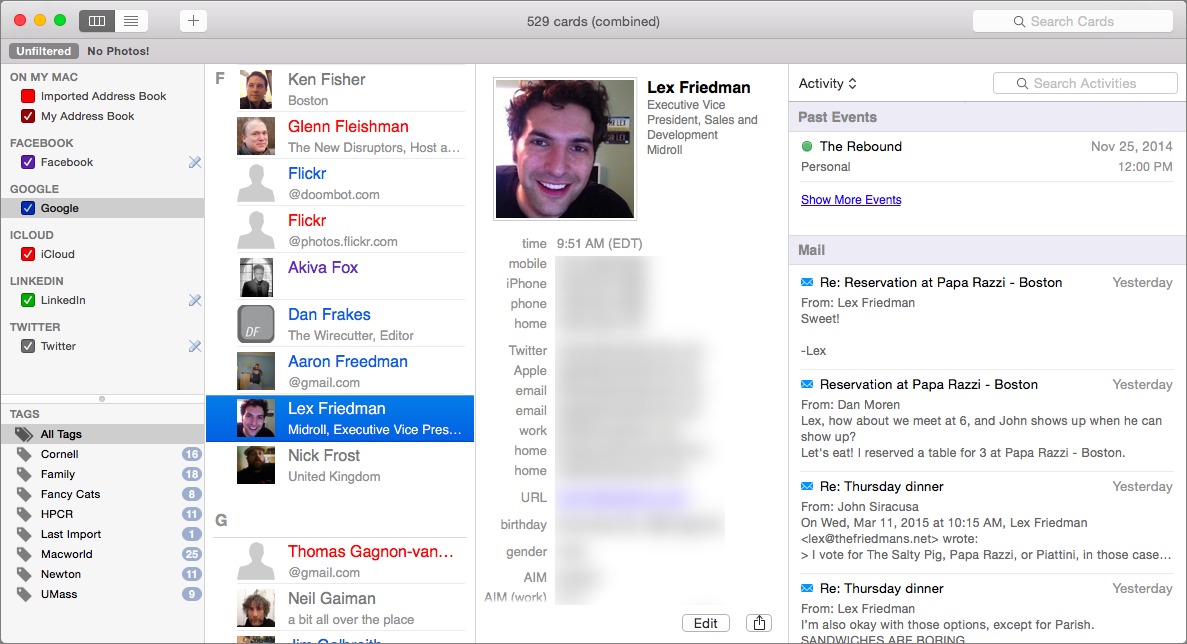 There are a couple of limitations to that list, though. For one thing, you can’t reorganize it, say, by moving calendar events down and Messages up. For another, BusyContacts pulls event info only from BusyCal, not from Apple’s own Calendar database (and you need to remember to associate contacts with events in BusyCal); BusyCal needs to be open, too — otherwise, you just see a “Show Calendar Events” hyperlink that, when clicked, opens BusyCal.

I found a few other peculiarities while testing BusyContacts. For example, you can add a handy “local time” field to contact records, which reminds you before you call your cousin in London that it may be the middle of the night there. But to do so, BusyContacts does a reverse lookup on the area code of the first phone number listed in her record. I have a decent number of friends who have kept their cell phone numbers from college or a previous job, and they can often be time zones away from where they now live.

I also wish I could easily rearrange the information in BusyContacts’ contact records. Reordering phone numbers requires a frustrating copy-and-paste dance; it’d be great if, in that aforementioned example with the area codes, I could simply drag my friend’s home phone number to the top of the list.

Finally, sharing. While BusyContacts makes it possible to share an address book between multiple users (say, you and your spouse), it has to work around the limitations of the services themselves. For Google and iCloud, for example, you need to have both people log into their accounts on any machine using BusyContacts. Sharing over your local network works, but is limited to local address books, which cannot be synced with an iPhone.

That brings up another frustration for me, as someone who uses multiple Macs: BusyContacts worked fine once I got it set up on both my MacBook and my iMac, but the setup is a bit of a pain, since I had to log in to each of my accounts on both machines. It would be nice to have a way to expedite the login process for a second Mac.

And, of course, getting the benefits of BusyContacts on your iOS device is also a bit of a pain, due to the limitations of Apple’s mobile platform. There’s no way to easily “sync” your entire BusyContacts database to your iPhone or iPad without merging all of your contacts into one of your existing syncing accounts (like iCloud, Google, or Exchange) — which may have unintended consequences — or by using a service like Fruux to handle all of your syncing needs. Honestly, what’s really needed is a version of BusyContacts for iOS to let iOS users take advantage of all the features the Mac version provides.

New copies of BusyContacts 1.0 cost $49.99 direct from BusyMac or via the Mac App Store, but upgrades, volume discounts, and special offers are available only directly from BusyMac. For instance, BusyCal owners can sidegrade for $29.99, additional licenses can be added at a discount, staff and students at educational institutions can save 20 percent, and BusyContacts and BusyCal can be purchased in a bundle for $79.98.