I’ve always been conflicted about Apple’s trackpads. I admire their comfort and precision, but I’m just more effective with a mouse. I’m also overwhelmed by all the trackpad features — I can never remember all the multi-finger taps and gestures, much less put them to practical use. So when Apple announced the Force Touch trackpad, with yet more input options, I was skeptical.

“Force Touch,” which sounds like a kung fu fighting move, refers to new capabilities that simulate the sensation of a mechanical click even though the trackpad surface scarcely moves at all. Instead, the trackpad uses sensors to detect finger presses and responds with haptic vibrations. 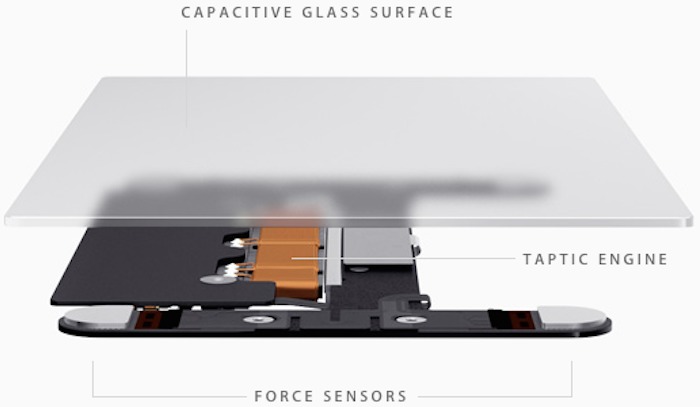 This is almost indistinguishable from a physical click and is likely to fool anyone who is unaware there is a new trackpad. I had to watch my finger clicking on the new trackpad to be certain I wasn’t using an old Apple trackpad with traditional mechanical movement.

TechCrunch’s Matthew Panzarino does a good job of explaining the trackpad technology:

There is a set of vibrating motors underneath that provides “force feedback,” also known as haptics in some applications. This feedback fools your finger into believing that you’ve pressed down on a hinged button, the way your current trackpad works. This feedback relies on phenomenon called lateral force fields (LFFs), which can cause humans to experience vibrations as haptic “textures.” This can give you the feel of a “clickable” surface or even depth. The Force Touch feature of the new trackpad allows you to press “deeper,” giving you additional levels of tapping feedback. The effect is done so well that you actually feel like you’re pressing down deeper into a trackpad that still isn’t moving at all. It’s
so good it’s eerie.

Force Touch is more than a parlor trick. It brings with it new capabilities. In addition to the standard simulated clicking, you can press down a bit more firmly to “force-click.” When you do so, you feel not one but two distinct clicks. And depending on where your cursor is pointing when you do this, different things happen.

Apple has a long list of capabilities on its site, but key examples include force-clicking a file icon to see a Quick Look preview, a point on a map to put a pin in a location, a reminder or event to see the details inspector, a link in Safari or Mail to see an inline Web preview, and text in a Web page or a Mail message to conjure up a window with relevant dictionary or Wikipedia information. It’s unclear exactly how Apple chose these actions, or how they differ conceptually from Control/right-click actions. 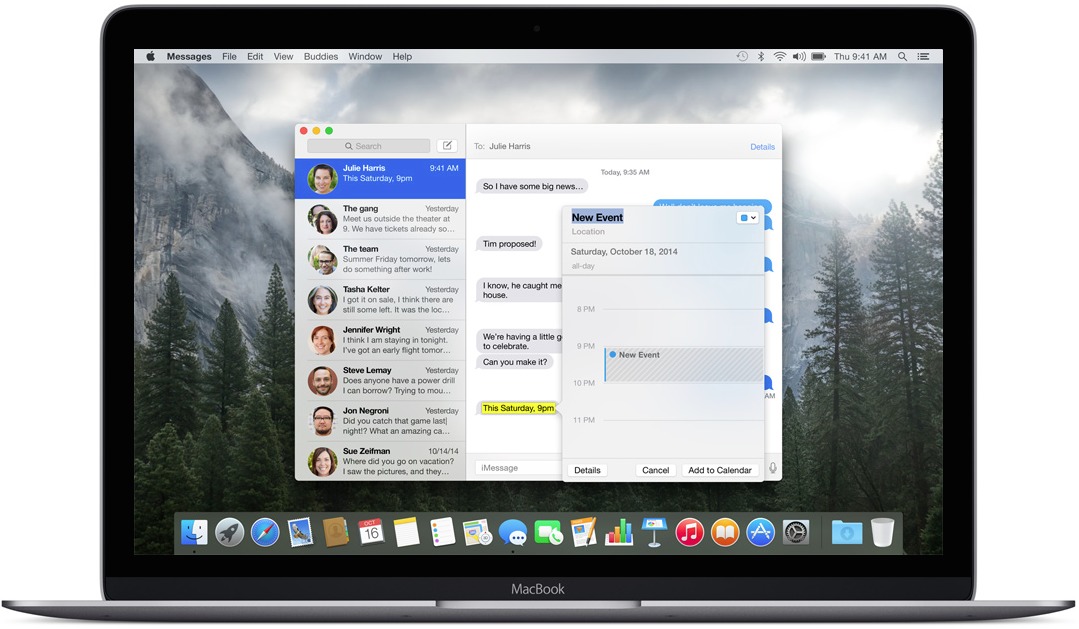 Increasing finger pressure on the trackpad makes video in QuickTime Player and iMovie fast-forward and rewind more quickly, and accelerate zooming in the Maps app. You also feel haptic feedback when aligning annotations in a PDF, dragging an iMovie clip to its maximum length, and snapping an iMovie title into place, among other actions. 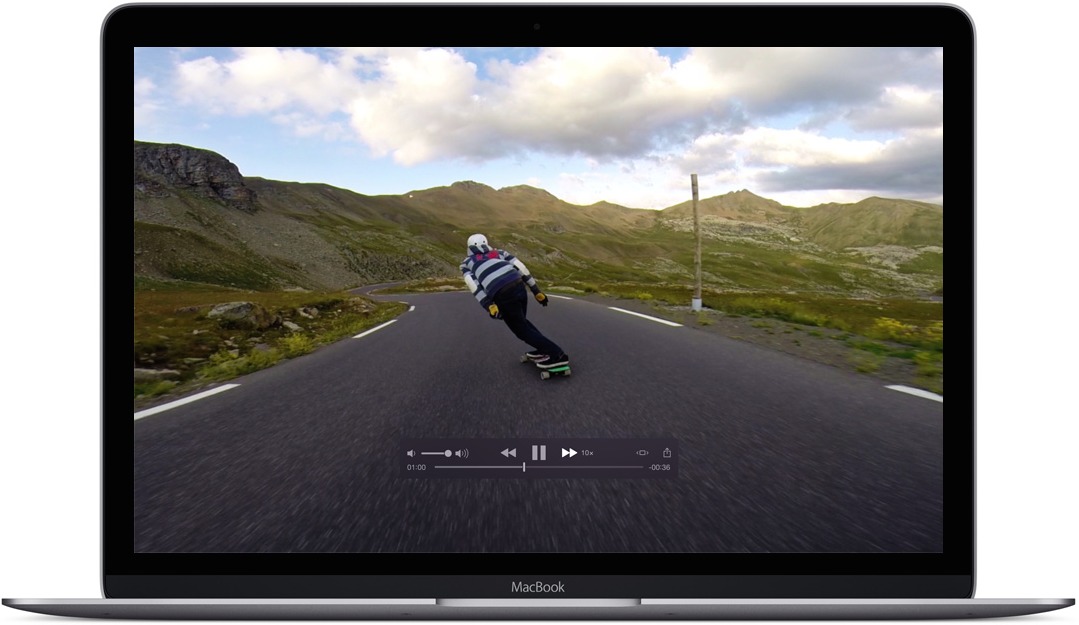 Eventually, third-party developers will be able to tap the trackpad’s new capabilities to, for instance, add pressure sensitivity to drawing applications. Such a feature is already present in Apple’s Preview app, which lets you vary the thickness of a line you’re drawing based on how hard you press the trackpad while doing so. This also works when marking up a Mail attachment. 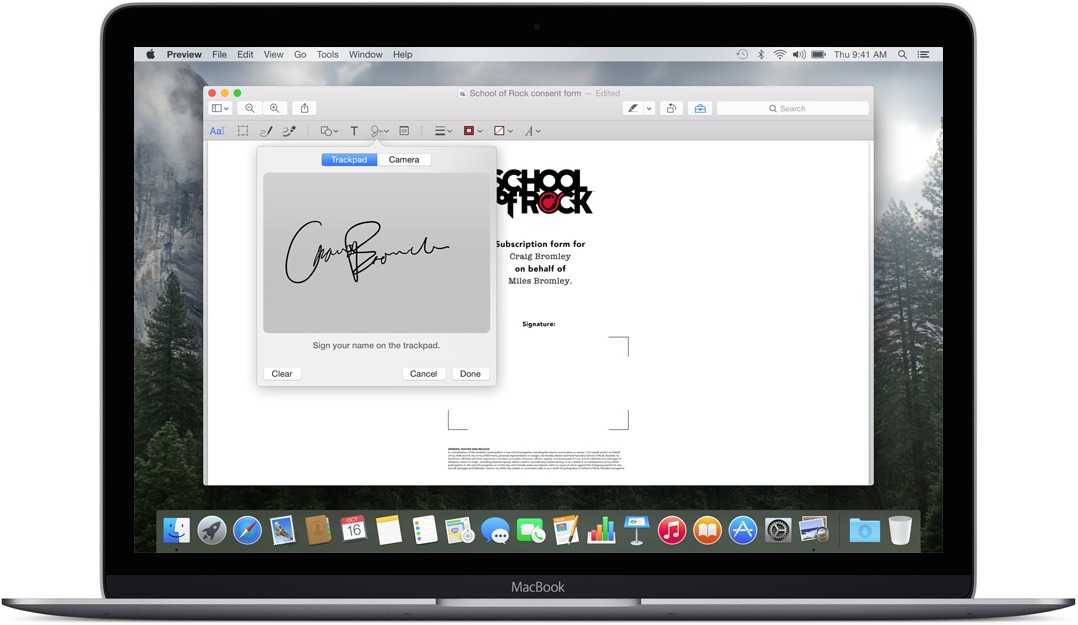 On a more basic level, the new Force Touch trackpad replicates familiar features found on the mechanical trackpad, such as dragging a file with thumb and forefinger. It feels a bit better to do this with the Force Touch trackpad because click pressure can be adjusted from “light” to “firm” in the Trackpad pane of System Preferences, something that wasn’t an option with mechanical clicking. I prefer “medium” pressure.

The Force Touch trackpad retains older capabilities. Tapping lightly with two fingers is still an equivalent of a mouse right-button click. Also present is the one-finger “tap to click” feature that some other Mac users dislike; I’ve long loved it. All the other gestures for dragging, zooming, rotating, and the like are there as well; I’ve just never found them compelling enough to integrate them into my fingers.

I wonder if I’ll come to regard Force Touch as indispensable, or pointless. I can’t answer that with just a few days of use, but I am leaning towards the middle ground of liking, but not needing, the new capabilities.

For example, I typically use Quick Look by selecting a file or folder and then pressing the Space bar. I could force-click the file instead, but is that easier or more convenient? A little bit, maybe.

Going down the list of Force Touch actions, none make me want to cry out, “Wow, I’m glad I can now do that.” But as these become ingrained in the Mac landscape, it’s entirely possible I’ll embrace some of them. They’re not game-changing, but they certainly are cool and fun.

In other words, the Force Touch trackpad alone is no reason to rush out and buy a new MacBook. But the new features are more evidence that Apple leads the way in trackpad design. I expect PC notebook makers to mimic Force Touch capabilities in short order.

Execution is everything, and the Force Touch trackpad has been implemented impeccably as far as I’ve seen so far. It just works, and is a welcome addition to the MacBook line. I hope Apple makes it possible for desktop Mac users to join the Force Touch party too, with an updated Magic Trackpad.

Excellent though it is, I’m still a mouse guy. That said, if key Mac apps start providing interesting Force Touch feedback capabilities that go beyond Apple’s basics, I may have to reconsider.