Late last year, we reported on Apple’s poor handling of developers trying to take advantage of new features in iOS 8. In what publisher Adam Engst described as a “bring me a rock game,” Apple would allow an innovative app into the App Store, only to kick it back out again weeks later (see “iOS 8 App Development Becomes a “Bring Me a Rock” Game,” 15 December 2014).

Thanks to public pressure, Apple has slowly changed its tune, reinstating most of the banned apps. With the return of the free Launcher to the App Store, we can hope that Apple’s frustrating game is finally over.

First, I’d like to commend Cromulent Labs developer Greg Gardner on his patience and persistence. For those who don’t remember, this is what he said about his conversations with Apple:

They basically said that Launcher was a trailblazer in uncharted territories and that they felt that they needed to make an example of it in order to get the word out to developers that its functionality is not acceptable without them having to publish new specific guidelines. And they said that the fact that they aren’t seeing hundreds of similar apps submitted every day is proof to them that taking down Launcher was successful in this regard.

So what does Launcher do that’s so egregious? It installs a widget in your Notification Center that lets you launch apps and perform specific actions. Scary, no? Apart from the widget interface, Launcher is much like power-user favorite Launch Center Pro.

When you first open Launcher, it walks you through a wizard that sets up a few example actions. I gave it access to my contacts, and in return it created launchers to call my wife, FaceTime my mother, message my brother, and email my boss. Assuming that you have these relationships set up in Contacts, Launcher should do something similar for you (to learn how to set up those relationships, see “Making the Most of Contacts in Mavericks,” 15 November 2013). It also created a launcher to open the Music app and another to open its own app. Plus, Launcher tried to make a launcher to have Apple Maps guide me home, but for some reason, it thought my house is somewhere in Nashville. 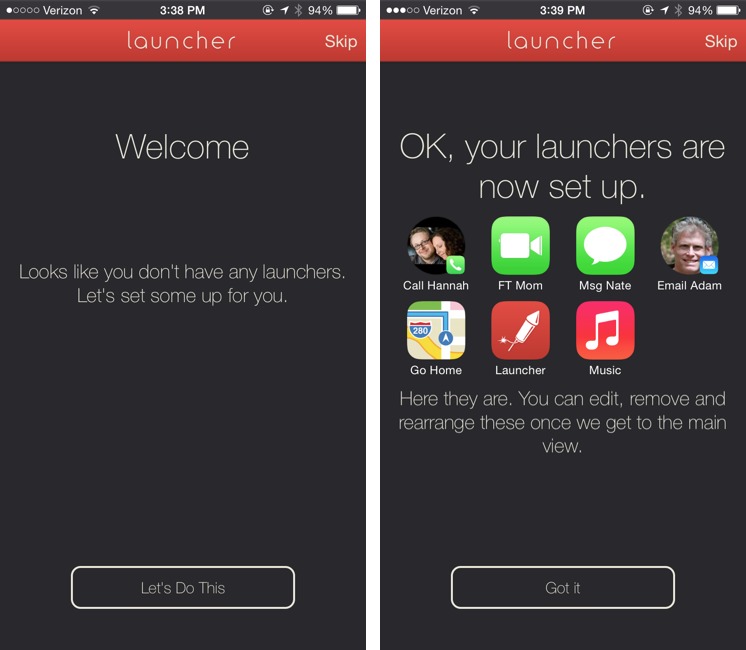 In its free mode, Launcher allows only 8 launchers on the iPhone or 12 on the iPad, but a $3.99 in-app purchase unlocks the pro version, which increases those numbers to 20 on the iPhone and 30 on the iPad. The pro version also lets you customize icon sizes, hide labels, and remove sponsored launchers, which I’ll explain momentarily.

After tapping Add New to add a new launcher, you’re given four choices: 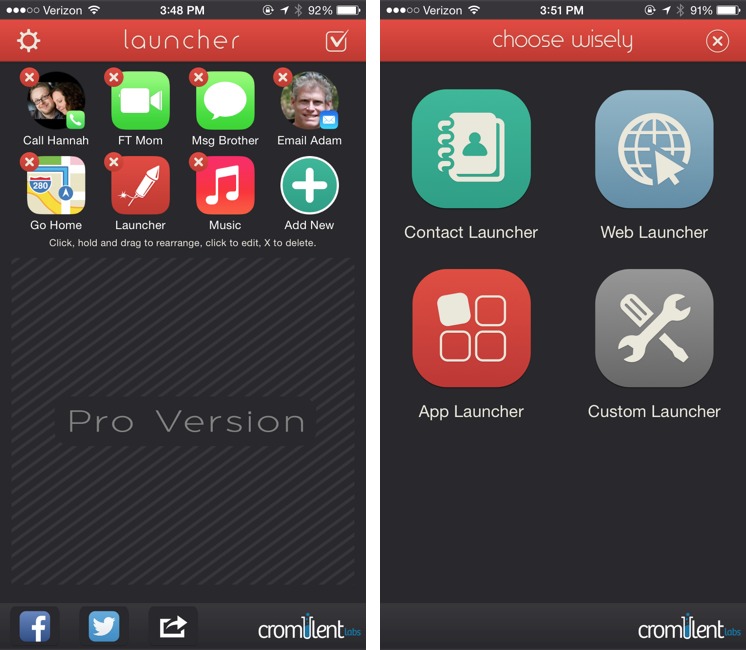 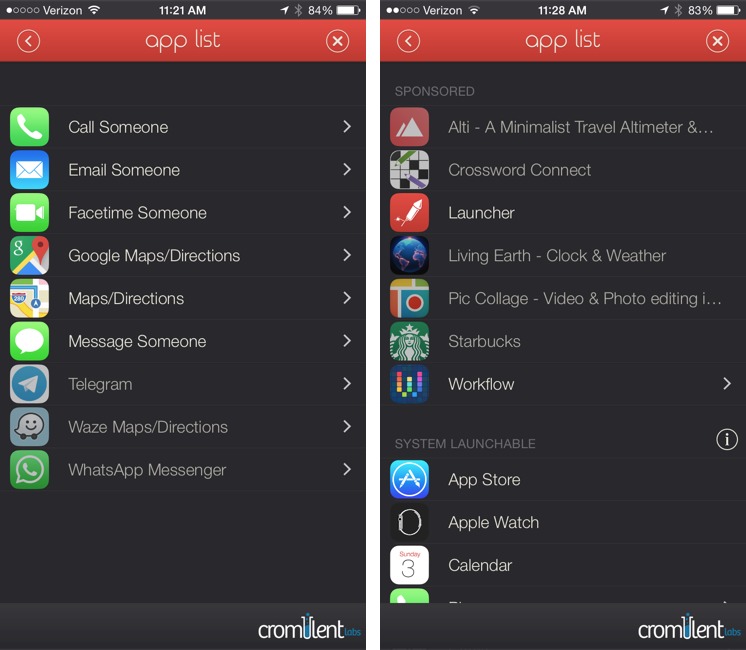 Launcher needs a bit more work, but I’m overlooking its rough edges for a good reason: unlike Launch Center Pro, Launcher lets me launch actions from a Today View widget in Notification Center as well as from within the Launcher app. I’ve always found Launch Center Pro fascinating, but not enough of a productivity win. Why use one app to open another, when opening the second app directly would often be faster?

Because of Launcher’s spot in Notification Center, I can activate my launchers from inside any app, or even from the lock screen (though Touch ID or the passcode is still required). The Notification Center widget removes much of the friction associated with other automation apps.

Also interesting is that Launcher can launch workflows from the Workflow automation app, which I wrote about in “Workflow Is the Next Step for iOS Automation,” (21 December 2014). So, in theory, you could have launchers to call you a car via Uber, order a pizza, tweet the currently playing song, or any of the myriad things Workflow can do.

But again, Workflow integration has some issues. When you create a Workflow launcher, you must type in the workflow’s name, with precise spelling and capitalization. Also, some workflows, when opened from Launcher, cause Workflow to crash. I created a workflow to play a certain genre of music from my library that works fine in the Workflow app, but crashes when activated in Launcher.

Despite its limitations and early quirks, it’s exciting to see Launcher in the App Store, because it means that Apple may finally be ready to open up iOS 8’s full potential to developers. And because Launcher is free, it’s easy to see if it will speed up your iOS usage in a real way.

Comments About Launcher for iOS Finds the Rock