Online video broadcasting is undergoing a renaissance. First there was Meerkat (see “Meerkat Broadcasts Your Video to Twitter,” 11 March 2015), which combined simple video streaming with the network effect of Twitter. Unfortunately for Meerkat’s developers, Twitter had purchased a similar app of its own, and Twitter quickly cut Meerkat off from its social graph.

Following Meerkat’s success, Twitter has released its own take on video streaming, the free Periscope for iPhone. How do the two compare?

Both apps do the same basic thing: stream live video over the Internet and post a link to the stream through your Twitter account (though with Periscope you must tap the Twitter icon before broadcasting). Both apps let you watch live streams as they happen.

The biggest difference between the two is video storage. Meerkat saves videos only to your device, not to the cloud, whereas Periscope can do both, offering an option to save locally and automatically saving to the cloud a replay of any video you broadcast for 24 hours. You can save your own broadcasts, but not the broadcasts of others. Happily, you can cancel replay uploads at the end of a stream, and you can delete replays at any time.

Thanks to replays, Periscope is never a barren wasteland when you open it. Often, when I open Meerkat, there is nothing to watch. In general, Periscope already seems much livelier than Meerkat, perhaps thanks to having full access to Twitter’s social graph. You can choose to follow those whom you also follow on Twitter, but even if you follow no one, Periscope always offers something to watch.

Even broadcasting over Periscope seems livelier. I started a stream, and within seconds I had over 30 viewers. On Meerkat, I was lucky to get a handful of viewers.

Unlike Meerkat, you have a chance to set up your broadcast before going live. Unfortunately, you can’t switch cameras until you’re actually broadcasting, which is incredibly frustrating. But you can decide beforehand whether you wish to share you location with viewers or post a tweet announcing the stream. Also, unlike Meerkat, you can choose to share your stream with only certain viewers by tapping the lock icon on the broadcast screen. 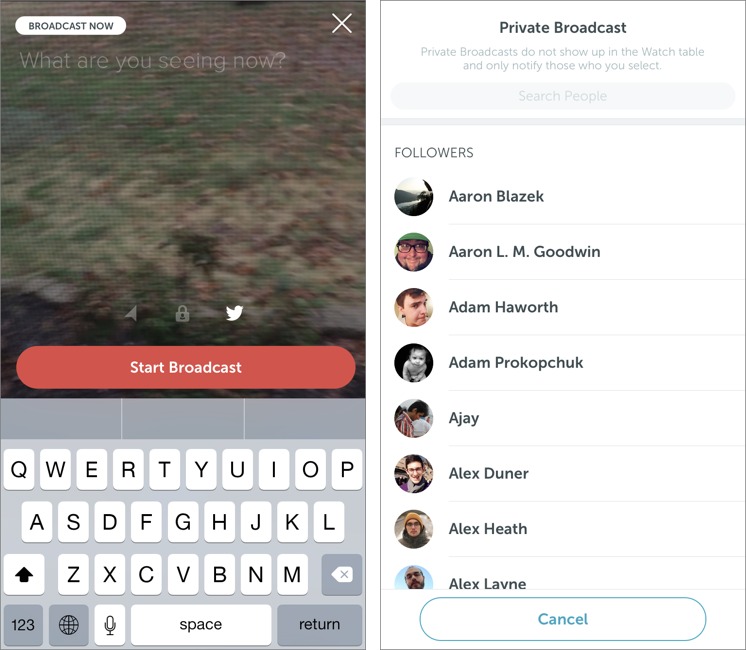 One big advantage Meerkat holds over Periscope is that it allows you to schedule a stream for later. With Periscope, it’s all about the here and now.

While watching a stream, you can post comments, but unlike Meerkat, which uses Twitter @replies for comments, Periscope’s comments stay confined within the app. You can also tap the screen to send “hearts.” You can see not only the hearts you send, but the hearts that all viewers are sending. It’s sort of disconcerting how many can appear at once, but if you’re broadcasting, it’s as if your audience is cheering you on. Also, the more hearts you receive, the higher you’ll get in the “Most Loved” list of recommended people to follow. 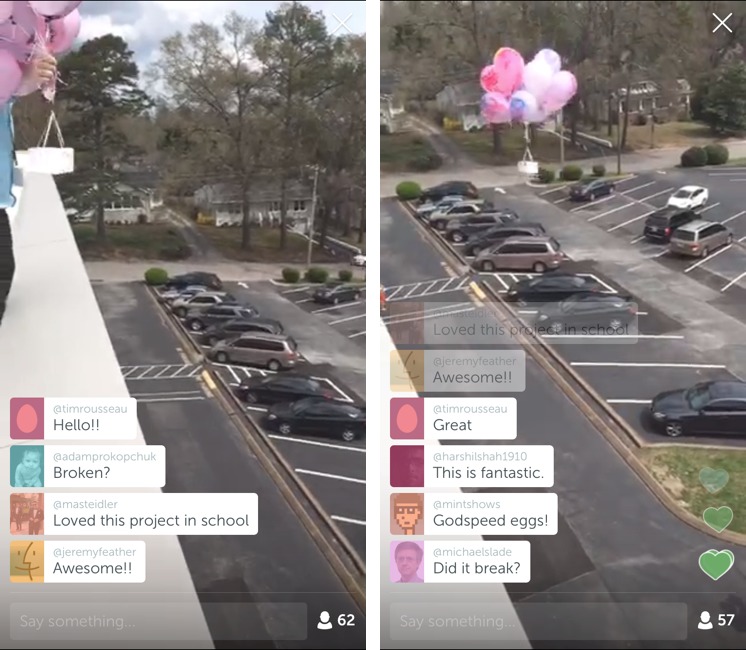 Periscope’s video quality, reliability, and smoothness is superior to Meerkat. Also, there’s less latency, so what you’re actually seeing is closer to live than Meerkat, which is helpful when you’re interacting with your viewers.

Periscope doesn’t let you search for videos, nor does it keep a list of recently viewed videos. So if you stop watching a video stream, you may never find it again. Even pulling up a user’s profile doesn’t show current streams or replays. This is the most frustrating thing about Periscope so far, and something I hope they fix soon.

Also, like Meerkat, Periscope offers a Web player if you click through from a link on Twitter, but its interface is rudimentary — you can watch video, but not interact with it. On the upside, tapping a Periscope link in iOS opens the video in that app, as opposed to Meerkat, which awkwardly tries to open the Web player. 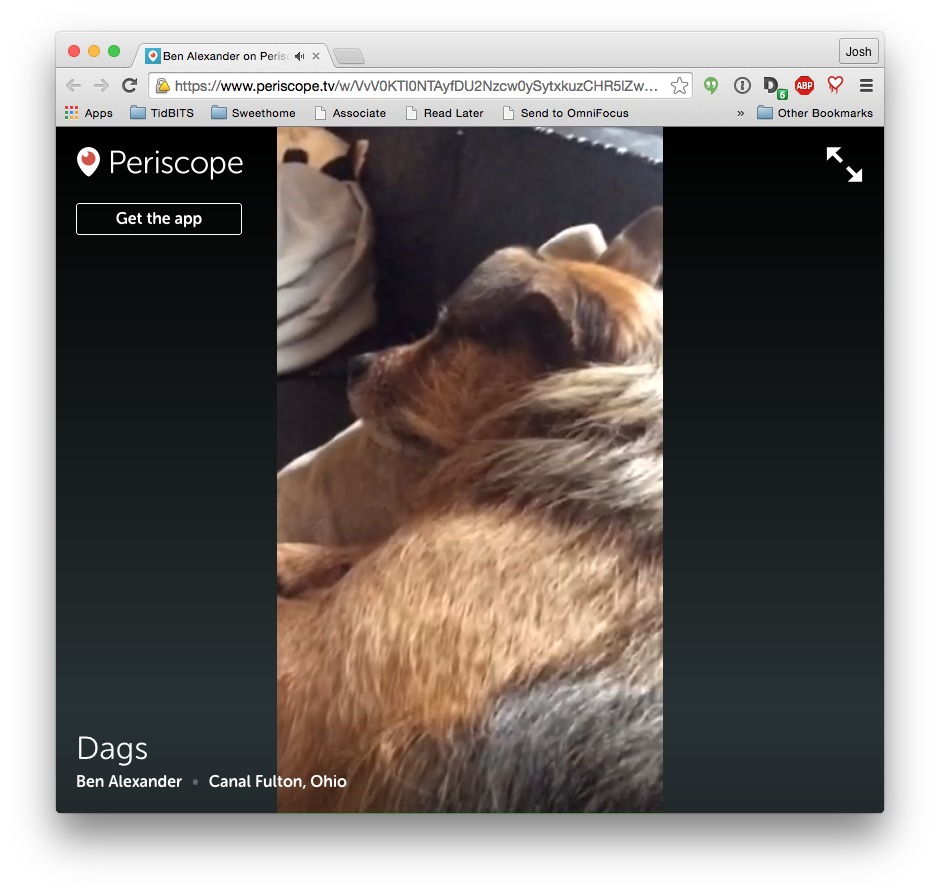 There’s also another key difference between Meerkat and Periscope: adult content isn’t allowed on Periscope. Nudity is kosher, but not, um, activities. This may be moot; I have yet to see anything NC-17 rated on either service.

If anything, both Periscope and Meerkat suffer not from adult content, but boring content. Most streams I’ve seen are people sitting around, eating, ordering food, or driving down the road. Then again, this seems to be how all social networks start. Remember when Twitter and Instagram were all about what people were having for lunch? It takes users time to figure out good ways to use new services, and food is always a safe, yet attractive topic of conversation.

But Periscope had its defining moment on the day of its release. On 26 March 2015, a fire broke out in New York City. Well before news networks could pick up on it, it was already well covered on Periscope. Watching it all unfold was mind-blowing. I can’t remember any other service going from launch to social relevance so quickly. Facebook, Twitter, Instagram, and even YouTube took years. Periscope did it inside a day. 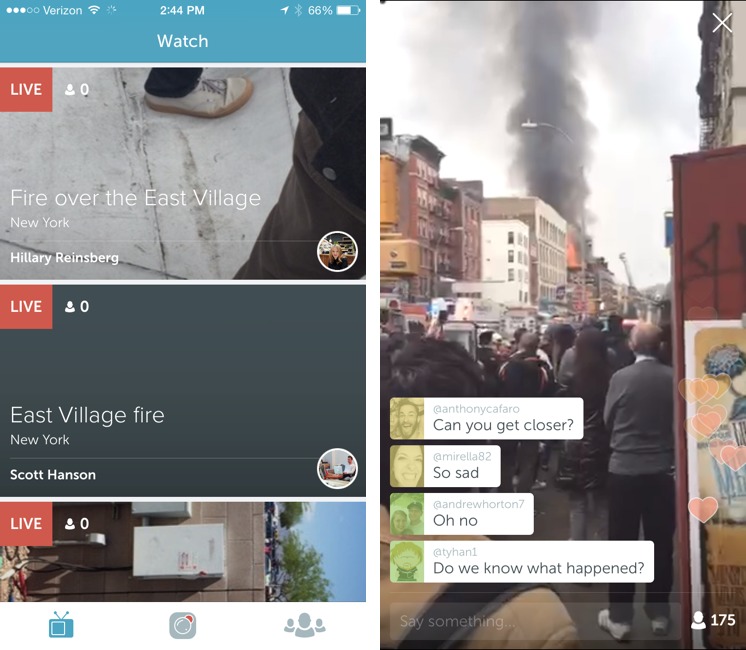 Unfortunately for Meerkat, there’s no comparison when you use the two services side by side. Meerkat might have beaten Periscope to market, but Periscope is everything Meerkat wants to be. Periscope seems to be growing faster than Meerkat did, and there is no danger of Twitter cutting off its own social graph.

Which makes it even more infuriating that Twitter hobbled Meerkat. Twitter didn’t need to — Periscope is the superior product. Twitter’s heavy-handed behavior makes me want to root for Meerkat all the more. If Twitter had more confidence in its product, it could have achieved the same success without essentially telling developers, “If you build something cool with our platform, we will steal the idea and cripple your app.” That’s not quite what happened — Twitter bought Periscope before Meerkat was a thing — but it could certainly look that way.

Privacy is the other concern with Periscope. Twitter isn’t a tiny startup trying to be nice; the company has a known record of selling your tweets to data-mining firms. Twitter is also more than happy to comply with law enforcement requests. Just how temporary are the videos streamed over Periscope? Will they really go away in 24 hours?

There’s also the privacy concern of having your actions unknowingly broadcast to the Internet if you end up in someone else’s Periscope video. But this is nothing new — the era of ubiquitous video monitoring arguably began with the 1991 police beating of Rodney King. And America’s Funniest Home Videos debuted roughly two years before that in 1989. Not to mention all the security and traffic-light cameras that have sprung up since.

Like it or not, Periscope, or something similar, is probably here to stay. With that will come challenges, but also opportunity. Consider what Twitter has done for print news gathering, particularly in places that are dangerous for traditional journalists, and apply that to broadcast TV. We’re facing a whole new era of journalism. The technology may not be new, but the social component is. And ultimately, power comes from the people.