In order to reduce glare for its various displays, Apple uses anti-reflective coatings that should absorb, interfere with, and redirect reflected light rays while allowing transmitted light emanating from your display to pass through to your eyes. As with any material that is adhered to another, this coating may strip off under certain conditions — including extreme heat or cold, uneven pressure, warping, and cleaning with caustic agents — things generally well beyond the intended and supported use of your Mac.

However, owners of some Retina MacBook Pros sold since mid-2012 are reporting that the coatings on their displays are peeling progressively under normal use. When this occurs, the systems show what appears to be light-colored stains on the display. Since the coating is translucent, the separation can’t always be seen easily in dark conditions with the display on, but it’s more apparent when the display is turned off in a bright environment. 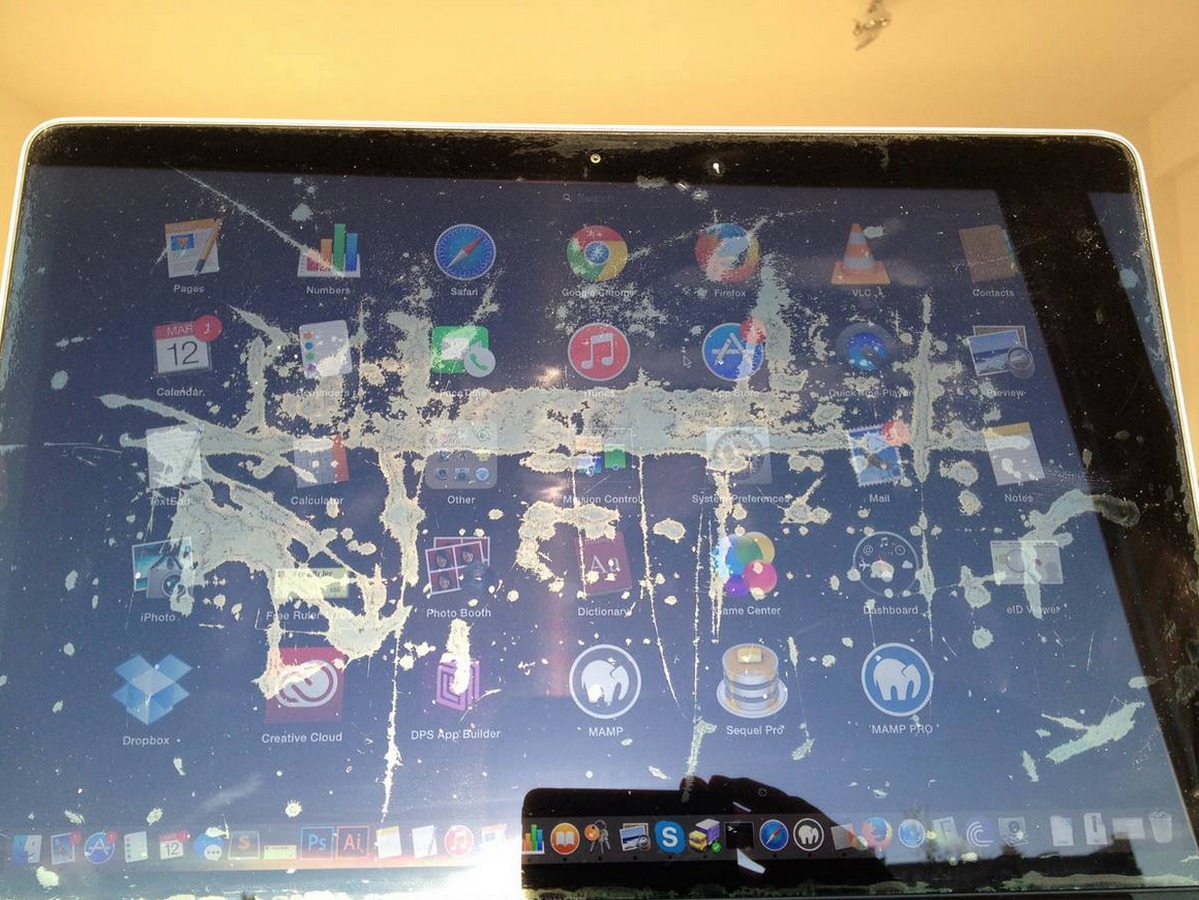 The true extent of this issue is unknown, but it’s sufficiently widespread for disgruntled users to have created a dedicated “Staingate” Web site. Plus, a thread on Apple Support Communities has over 500 posts and nearly 90,000 views, and there’s even a Facebook group with over 800 members.

Though this problem doesn’t necessarily hamper the overall functioning of the Mac, those affected would like their systems to be fixed. Unfortunately, Apple has not (yet) officially recognized the problem. In some cases, Apple has accepted and fixed affected machines, but at other times the company refuses to address the problem, claiming it is purely cosmetic.

Apple’s support has often been customer-friendly and responsive, and the company has a great reputation for being personable with customers. However, Apple’s reputation is often sullied by oddly inconsistent behavior like this. Most recently, before starting an official repair program, Apple was similarly random about fixing graphics issues in certain MacBook Pro models (see “Apple’s Baffling Response to 2011 MacBook Pro Graphics Issues,” 13 February 2015).

If your MacBook Pro’s screen is affected, your first approach is to play ball with Apple in hopes of finding a sympathetic support rep and registering another data point for Apple to track. But if that fails, it’s worth participating in the community that has formed around this issue. With the recent graphics errors in MacBook Pro systems, that community support led to a prominent law firm taking on the issue, which may have encouraged Apple to start a repair program.

I’m unaware of any such legal action currently underway against Apple over the anti-glare coating peeling and delaminating, but affected customers are signing petitions and sites such as Staingate are calling attention to the issue. If enough people report the problem to indicate a manufacturing fault, we may again see Apple forced to issue a repair program for affected Macs.

Even though Apple hasn’t provided consistent support regarding this problem, the company’s inconsistency may work in your favor. If you are affected by this problem and it’s worth it to you to have it fixed, spend a little time visiting nearby Apple Stores and Apple Authorized Service Providers, and contacting Apple’s other support lines. With luck, you might run into a sympathetic technician who will shepherd your MacBook Pro through the repair process.

Meanwhile, if you are concerned about your MacBook Pro’s screen, there are several steps you can take to help prevent damage. First, be sure to avoid using or storing your Mac in extreme conditions for extended periods of time — that includes direct sunlight and particularly hot or cold temperatures (recommended operating temperatures for the MacBook Pro are 50° to 95° F, or 10° to 35° C). Granted, the Mac ought to work fine if you’re only a bit outside these conditions, but if your display is already showing signs of peeling, these precautions may prevent further spread. Additionally, avoid pressing, poking, or scraping
your display, and don’t pick up the MacBook Pro by the screen — the goal is to prevent any warping of its surface that could contribute to coating separation.

Finally, if you are willing to pay for a screen repair, or have already done so, be sure to keep receipts and other documentation related to the repair. Depending on how this situation pans out, such paperwork may be useful for claiming compensation from Apple over costs incurred to fix your system.