No IT administrator in her right mind would set up Macs and iOS devices individually, installing software, configuring settings, and logging users into organizational services for each one. Powerful device-management tools exist for this purpose, which make it possible to efficiently configure, monitor, and maintain Apple devices en masse.

Many in large organizations turn to JAMF Software’s Casper Suite, the enterprise-grade toolkit for managing fleets of Macs and iOS devices across a corporation, government agency, or school district.

But JAMF recently realized Casper Suite is overkill for smaller organizations that are responsible for fewer Apple devices. JAMF co-founder Chip Pearson said this dawned on him when he saw his support staff spending hours on calls with befuddled small-business owners. For such people, he realized, IT is a task, not a career.

So JAMF went back to the drawing board and created a device-management service for modest-sized organizations. Called Bushel, it’s a Web-based toolkit for managing deployment of Apple devices in the dozens, not the hundreds or thousands.

Bushel is much simpler than Casper Suite, and JAMF has made Bushel free in perpetuity for up to three Apple devices per account — plenty to get your feet wet with device management. Additional devices cost $2 per month each, with no long-term contracts necessary.

I’ve been testing Bushel extensively since its release late last year, pretending to be a small-business owner and using the service to manage a handful of Macs and iOS devices. Though this has been fun, it has made one thing clear to me: Bushel is not for consumers (even super geeky ones). It’s intended for organizations, not individuals, even though anyone can play with it.

Getting Started — One of Bushel’s main strengths is its Web-based nature, unlike Casper deployments that generally require software to be installed on corporate servers. Bushel is a Web app, in essence, and is accessible via a browser window on almost any modern computer or mobile device.

To use Bushel, Apple devices must first be “enrolled.” A company’s IT administrator can do this, as can employees with Apple devices if permitted to do so via an open-enrollment program. Enrollment is merely a matter of logging in and installing a bit of software to create a Bushel certificate on the Mac or iOS device.

Once a device is enrolled, it shows up on Bushel’s Web console. This is another strength of the service, since the console has a simple, playful design. (It was originally too simple, but JAMF has been steadily improving it.) Each enrolled device is shown on a card with an iconic representation of the hardware type. There is also a prominent Enroll This Device button. 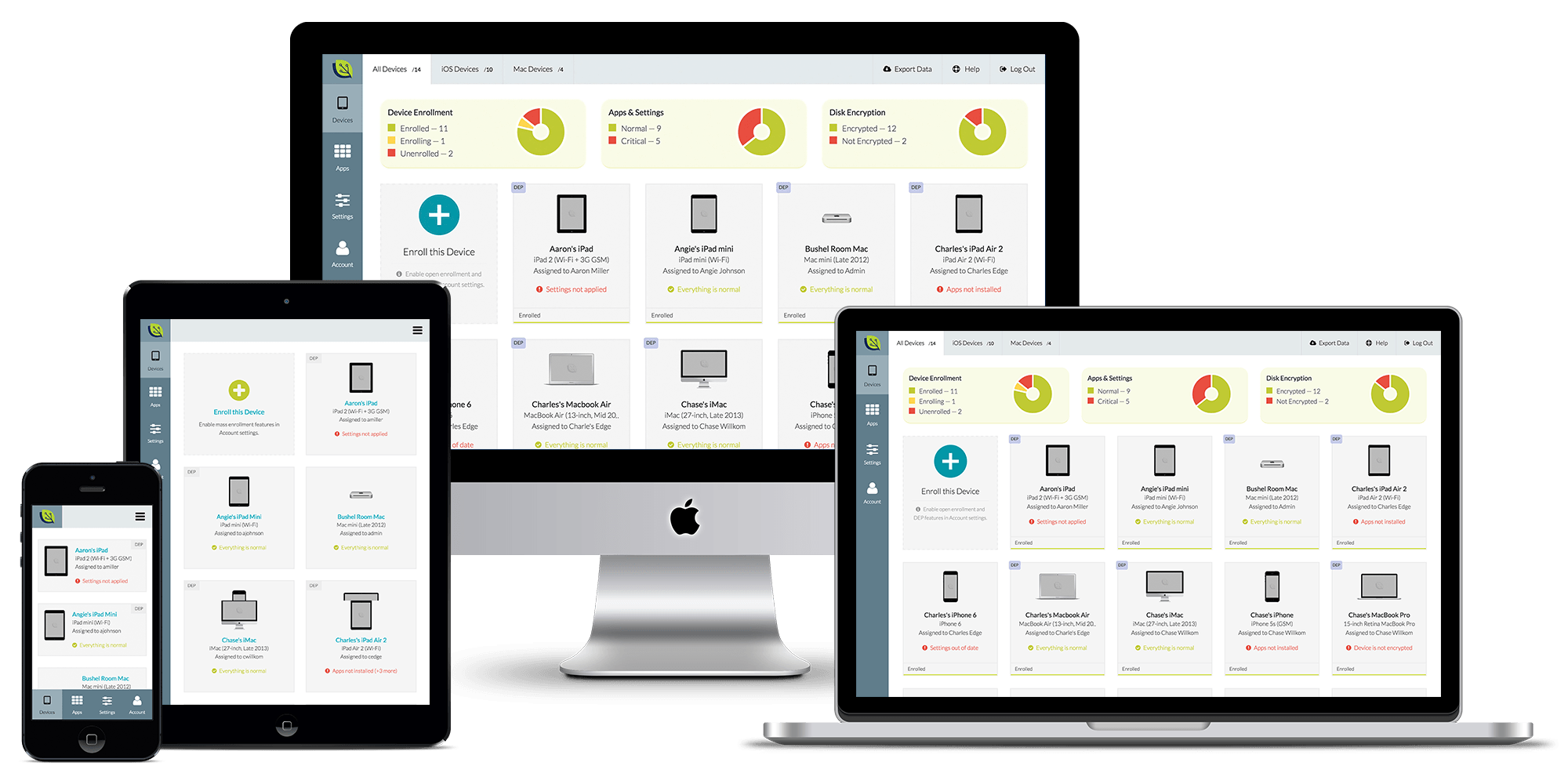 Doughnut-like symbols tell the administrator at a glance if devices are properly enrolled, if storage volumes are properly encrypted, and so on. Fully green doughnuts mean all is well. Any red in the doughnuts means there are problems with one or more devices. If so, an administrator can glance over the device cards to see which don’t show a green “everything is normal” message.

Clicking a gadget card reveals a wealth of data about the corresponding Mac, iPhone, or iPad. The card for my MacBook Pro, for instance, shows which version of Mac OS X is installed, the computer’s warranty status, whether FileVault has been enabled, its available storage capacity, and more. This data is crucial for helping administrators to stay on top of an organization’s device inventory. 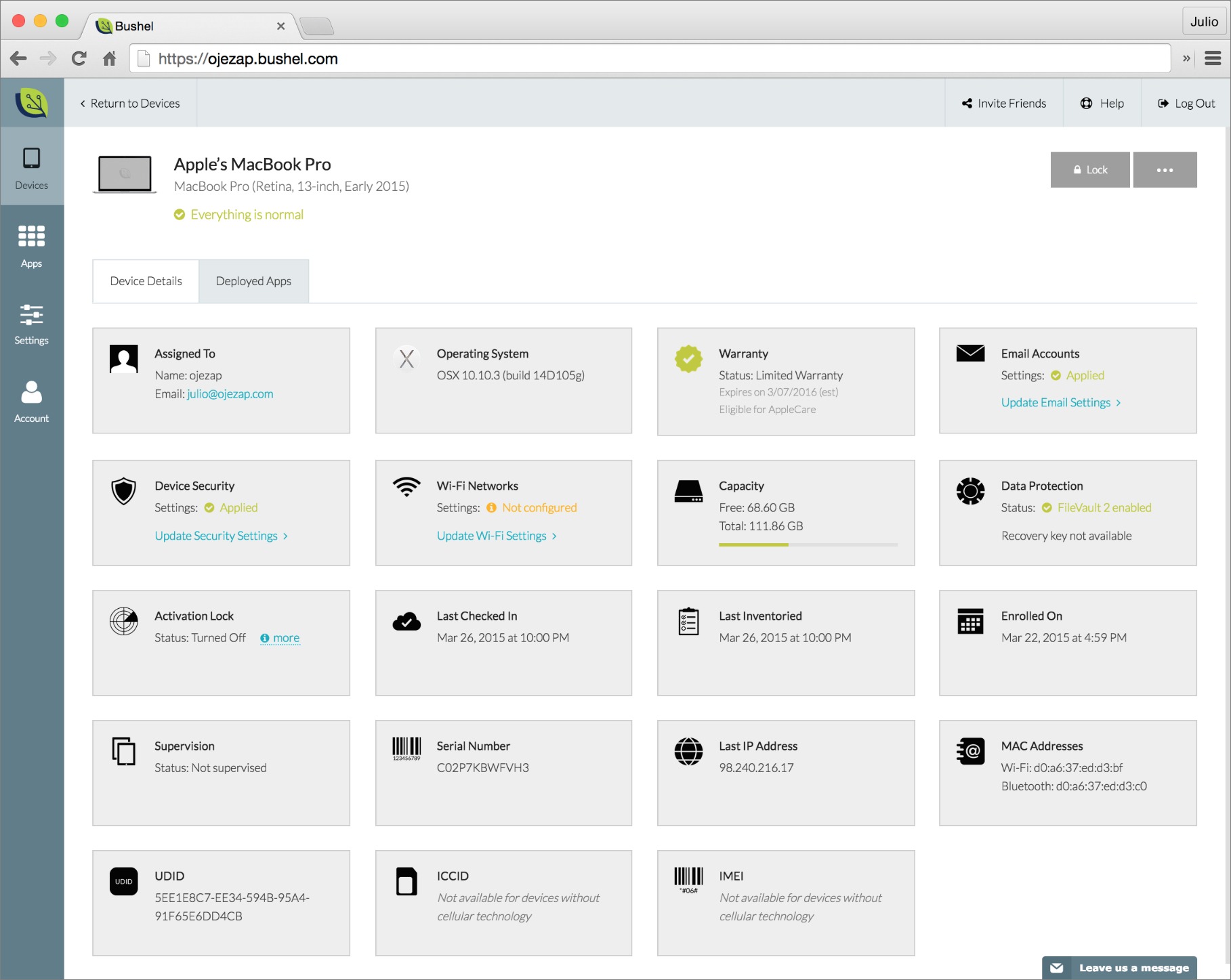 The IT administrator can also implement security policies, such as requiring a password or a passcode, limiting iCloud features on iOS devices, determining Wi-Fi settings, and so on.

Apps and Email — Bushel is designed to make life easier for a small company’s harried IT administrator (who is probably juggling this duty with many other ones). It’s pretty good at that, from what I have seen.

For starters, Bushel automates the installation of Mac and iOS apps. With a single mouse click, I installed a variety of apps on all of my Bushel-enrolled iOS devices, all at once. Later, if I enroll more iOS devices, the apps in my Bushel installation list will automatically be installed on those devices. 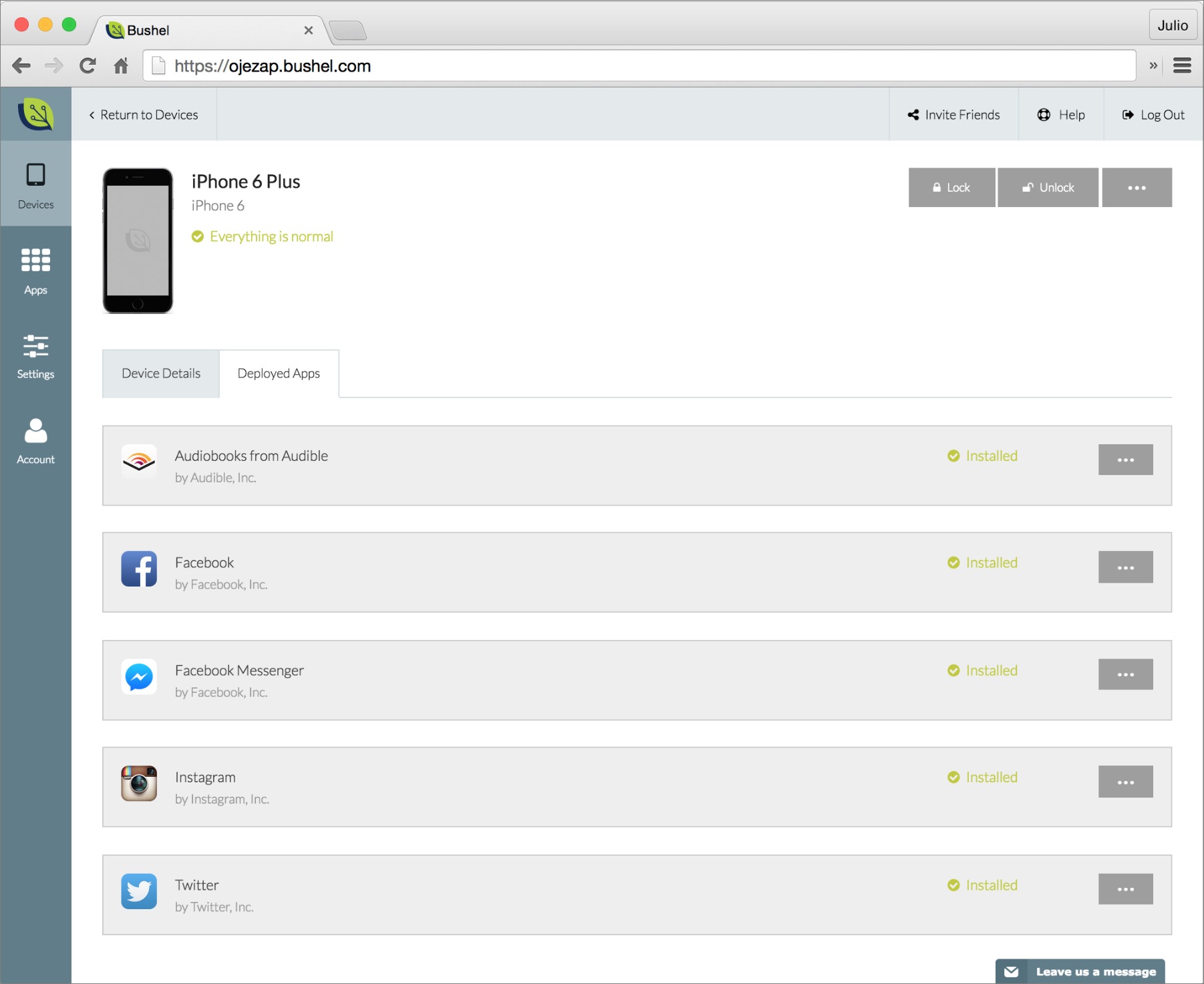 Given that I’m juggling a bunch of Apple gadgets — three Macs, three iPhones, and an iPad — being able to automate numerous app installs was a huge time saver.

But I couldn’t make full use of this app installation feature without access to Apple’s Volume Purchase Program for Business (there’s also one for education), the service that organizations use to purchase an app once and install it on multiple Macs and iOS devices connected to different iTunes accounts. This is one reason Bushel is not intended for individuals.

Bushel does have access to iOS’s App Store and the Mac App Store built in, making it easier for an administrator to find what she needs.

Bushel also automates the configuration of email accounts on devices. Administrators choose an email service: Exchange, Google, Yahoo, or generic IMAP and/or POP accounts. Employees’ devices are then set up automatically by pairing their user names with an employer’s domain name.

On my Macs and iOS devices, for instance, [email protected], associated with my Google Apps for Work account, popped right up in the Mail app.

Advanced Features — IT administrators can automate device enrollments by letting employees do most of the work via an open-enrollment program.

Users are given a URL that takes them to a Bushel signup page. When they enter their usernames and email addresses (and, optionally, an administrator-supplied code), their devices are brought into the fold.

The administrator can determine how long the open enrollment lasts, and even restrict the enrollment to a designated IP address.

IT administrators can also sign up for Apple’s Device Enrollment Program (DEP). Once in the program, Macs and iOS devices purchased by the organization are automatically enrolled in Bushel on activation. Some basic setup routines are omitted in order to get users up and running quickly. This is another portion of Bushel I was unable to test, for obvious reasons.

A Bushel of Apple Devices — I’ve never tried to get my head around JAMF’s Casper Suite because it’s extremely complicated, not to mention irrelevant to me as individual user.

Realistically, Bushel isn’t for me, either, but I can see where it might be someday, were I to become responsible for a group of people and all their Apple devices. I’d embrace Bushel in a heartbeat if I were starting a small business.

For those already in that situation, Bushel looks to be a godsend. JAMF has clearly worked hard to provide key device management features while avoiding feature bloat, because a new Bushel user can master the service in a couple of hours. Overall, it’s simple, easy to understand, and inexpensive — a perfect combination for allowing the part-time IT administrator to get back to her other tasks.

Enterprise Productivity
Cookies & Privacy: We wish we were talking about chocolate-chip cookies here, but our Web site—like nearly all others—relies on a few minor digital cookies. Various laws around the world require us to tell you that fact, so consider yourself informed, if not nourished. By continuing to use this site, you agree to our use of these cookies. Cookie and Privacy Notice