Twitter is a recipe for disaster. Its 140-character limit practically begs for you to broadcast short, half-baked thoughts. Combine that with Twitter’s public nature and world-wide network effect, and one misguided tweet could ruin your life. But sometimes Twitter mobs don’t even need a poorly conceived comment to pile onto users — just ask anyone who has been caught in the crosshairs of the Gamergate controversy (not to be confused with the Gamergate ant).

Ideally, we would all avoid Twitter entirely. As the sage producer of Saturday Night Live, Lorne Michaels, once quipped, “I don’t tweet for a very simple reason, which is that I drink.” However, most of us who depend on publicity for our livelihoods don’t have the luxury of being Lorne Michaels. The same Twitter mob that can send one person into hiding can give another person’s work a global audience. If not for Twitter, which I used to promote my early blog posts and pitch new article ideas, I wouldn’t be working for TidBITS now.

Twitter has another issue, in that tweets are a reflection of the moment they are conceived, and often do not age well. Or one brief tweet might have been supported and expanded upon by surrounding tweets, but when taken out of context years later, could send an entirely different message.

There’s probably no one more aware of Twitter’s double-edged sword than Trevor Noah, who is set to take the helm of The Daily Show when Jon Stewart steps down later this year. Noah, like many of us, used Twitter to get his work noticed. He zoomed from about two thousand followers in September 2009 to over two million today. But after his Daily Show announcement, inquiring minds dug up some off-color tweets from his past, sparking outrage. Comedy Central is standing behind him, but his new career is off to a rough start.

While most of us won’t be TV stars, Twitter can affect our careers in similarly negative ways. Despite the danger, many people can’t stay away. What’s to be done?

So-called “tweet deleters” think they have found a compromise by using scripts and services that delete tweets automatically after a given time. As CBC Radio producer Matthew Lazin-Ryder told Kevin Roose of Fusion, “I don’t laminate and frame my note-pad doodles, why would I preserve my tweets for all time?”

If you wish to become a tweet deleter, there are a few tools that can help. One of the simplest is a free iPhone app, Xpire, which can do four helpful things for your Twitter account: 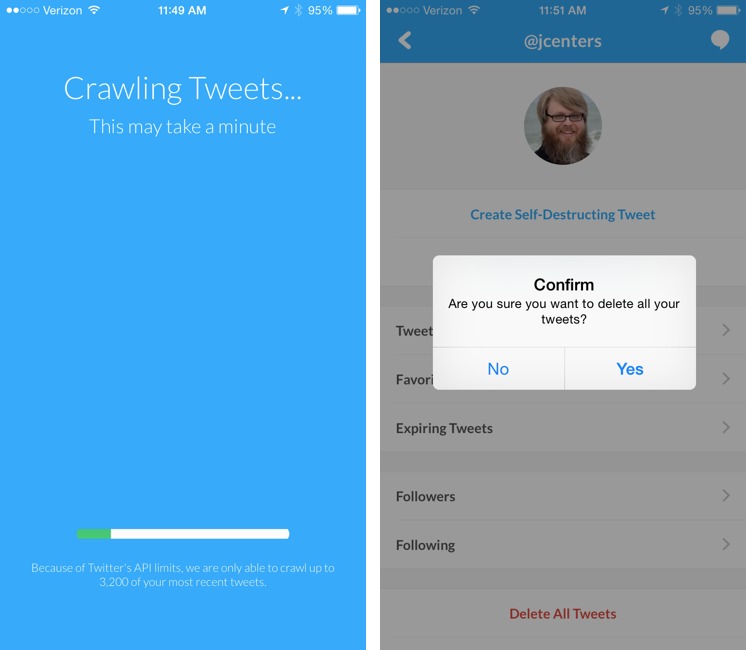 However, Xpire has one major drawback: due to Twitter’s API limits, it can interact with only your 3,200 most recent tweets. Also, though it’s also supposed to work with Facebook, I couldn’t get that functionality to work. Xpire also supports Tumblr, but I don’t have a public Tumblr account to test against.

An alterative free app on the Web is TweetDelete, which also claims to be able to delete all of your tweets, and even automatically delete new tweets after a set time. It too runs up against the 3,200 tweet limit.

Prefer a nuke-and-pave approach? The Twit Wipe site claims to delete almost everything from your Twitter account, including tweets, favorites, and retweets, leaving only who you follow and who follows you intact.

Beware that even if you do delete your old tweets, they may be archived elsewhere. Services like Topsy archive tweets for search and analysis. But deleting tweets from Twitter itself may at least make them harder to find.

Before you blow your entire Twitter history away, you may want to consider saving it for posterity. Thankfully, that’s a built-in Twitter feature. Here’s how to use it: 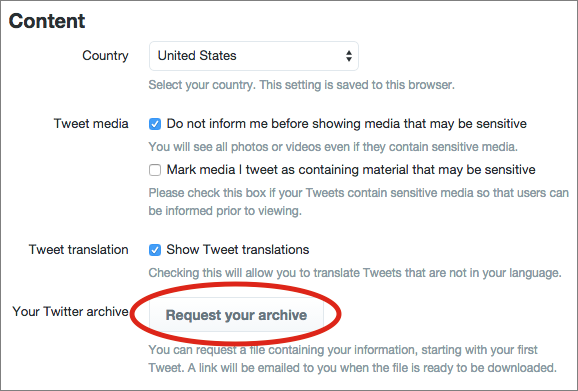 It will take some time to compile your archive for download. Twitter will email you a link when it’s ready. The data comes in a Zip file containing both a CSV file (that can be imported into a spreadsheet or database) and a JSON archive (for viewing in a Web browser).

The Future Will Leave No Trace — As Twitter fights to remain relevant in the ever-fickle social media realm, it needs to consider offering its own automatic tweet-deletion feature, unhampered by the current limitations of its public API.

The next generation of social media is clearly headed in that direction. Many teenagers don’t have Twitter accounts, or rarely use the service, but lots rely on Snapchat, which deletes messages after they are read. Snapchat isn’t perfect (it’s easy to take a screenshot), but its automatic deletion is perfect for many situations.

It’s only common sense. After all, if Twitter is the world’s bar, who wants their bar talk archived for all time?

The company might be reticent to offer such a feature, since it likely wishes to have as much data as possible to sell to advertisers. But nothing prevents Twitter from extracting what meaning it wants from tweets while they are public, and besides, advertisers are undoubtedly more interested in current data — what’s the benefit in trying to sell me on something I tweeted about five years ago?

The entire business model of social media depends on trust. Users have to trust both that their data won’t be sold in ways that could prove harmful and that ill-conceived statements won’t come back to ruin their lives.

In the meantime, think (don’t drink) before you tweet. You can follow my tweets @jcenters, until they vanish in a puff of smoke.

Comments About How to Automatically Delete Your Twitter Trail