Apple has released iOS 8.3, and while the large update doesn’t bring any major new features, it offers a massive list of bug fixes and performance improvements, by far the most of any update to iOS 8 so far. You can download the update via Settings > General > Software Update, or through iTunes.

As always, it’s a good idea to wait a few days to see if the update causes any problems, but so far it appears that iOS 8.3 brings the performance and stability that has been lacking in earlier releases of iOS 8. However, some users are reporting that Touch ID is not working for App Store purchases in iOS 8.3, forcing them to enter their passwords manually. We at TidBITS have not experienced this problem.

With iOS 8.3, iCloud Photo Library is now officially out of beta to coincide with the release of Photos for Mac; we’ll have more about that soon, but we strongly recommend not turning it on for the first time until we’ve completed our research against the final versions of iOS 8.3, OS X 10.10.3 Yosemite, and Photos 1.0 for Mac.

The first change you might notice in iOS 8.3 is the addition of over 300 new emoji. There are new flag emoji, along with a new one for the Apple Watch, but the bulk of the new symbols expand the diversity of emoji with symbols for same-sex couples and for different ethnicities. Some emoji now have selectable skin tones, which you can see by tapping an emoji, and then selecting your preference from the popover. The emoji picker has also been redesigned for seamless scrolling. 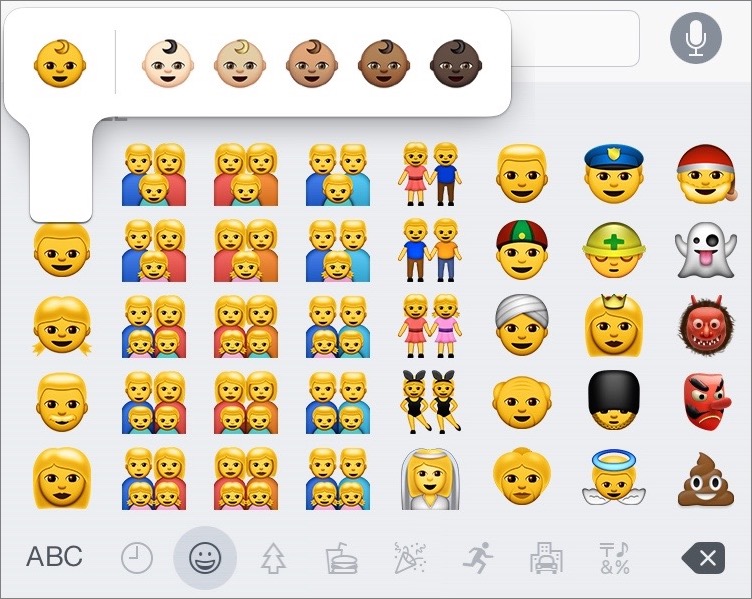 In addition to the new emoji, you might also notice a bit of a speed boost, particularly in these areas that Apple calls out:

I haven’t noticed significant changes on my iPhone 6, however switching between keyboards is now faster, and scrolling through Safari tabs seems smoother.

Another keyboard tweak that you’ll appreciate is the lengthening of the Space bar while entering URLs in Safari. In previous versions of iOS 8, the Go button was lengthened, shortening the Space bar and causing users to type periods accidentally.

Users of Google two-factor authentication will be pleased to learn that when adding a Google account in Settings > Mail, Contacts, Calendars, you can now use your two-factor token instead of an app password.

iOS 8.3 includes a few Wi-Fi and Bluetooth fixes, addressing issues like being continuously prompted for login credentials, devices randomly disconnecting from Wi-Fi networks, and hands-free calls spontaneously disconnecting, as well as an issue where audio playback could stop working with some Bluetooth speakers.

If you’re a Sprint customer, iOS 8.3 now allows Wi-Fi calling, which had previously been exclusive to T-Mobile in the United States. If your carrier supports it, you can enable Wi-Fi calling in Settings > Phone.

You can now download free apps from the App Store without a password. Visit Settings > iTunes & App Store > Password Settings, and under Free Downloads, disable Require Password (you’ll have to enter your iTunes password). Note that the Password Settings menu will not appear if you have Touch ID enabled for App Store purchases in Settings > Touch ID & Passcode (Thanks to Bhasker Bhat for solving that mystery!).

The update fixes a number of orientation quirks, including a fix for stuck orientations, a fix for upside-down orientations on the iPhone 6 Plus, and an issue that prevented apps from rotating. Apple also claims that orientation rotation performance has been improved. We’ve noticed that Safari seems to maintain scroll position when changing orientation in Reader View, which wasn’t reliable before.

Messages in iOS 8.3 now allows you to filter unknown senders in Settings > Messages. When enabled, it disables notifications from senders who are not in Contacts, and it splits messages into two lists: Contacts & SMS and Unknown Senders.

You can also now instruct Siri to place a call via speakerphone.

iOS 8.3 includes many more tweaks than we can list here, including improvements to CarPlay, enterprise connectivity, accessibility, and various miscellaneous fixes.

As always, the iOS update includes a slew of security fixes. Apple has also released Apple TV 7.2 for the third-generation Apple TV with a number of similar security improvements.

Comments About iOS 8.3 Triggers an Avalanche of Improvements