DEVONagent Lite, Express, and Pro 3.9.1 — DEVONtechnologies has updated all three editions of its DEVONagent research software (Lite, Express, and Pro) to version 3.9.1. All three add plug-ins for searching Stack Overflow and GitHub, and the Express and Pro editions also add a recipe scanner that filters results for contained cooking recipes (with support for microdata, RDFa and microformats). DEVONagent Express and Pro also improve HTML-to-text conversion, handling of background tasks, and compatibility with invalid BASE URLs of Web pages. The Pro edition also gains an improved email
scanner (which recognizes email addresses in HTML metadata) and better exporting to DEVONthink (adding application name and version, the name of the search set, and the search query to the comments). (All updates are free. DEVONagent Lite, free, release notes; DEVONagent Express, $4.95 new, release notes; DEVONagent Pro, $49.95 new with a 25 percent discount for TidBITS members, release
notes. 10.7.5+)

iTunes 12.1.2 — Apple has issued iTunes 12.1.2 with support for the newly released Photos app in OS X 10.10 Yosemite (see “Apple Releases OS X 10.10.3 with Photos,” 8 April 2015). The Apple support page also notes that the update “adds several refinements to the Get Info window,” which are mostly evident in the rejiggered Details pane. The fields have been shuffled around to consolidate the album and artist fields at the top, and the track and disc numbering fields have been moved a little higher as well. (Free, 205 MB via direct download or 104 MB via Software Update, 10.7.5+) 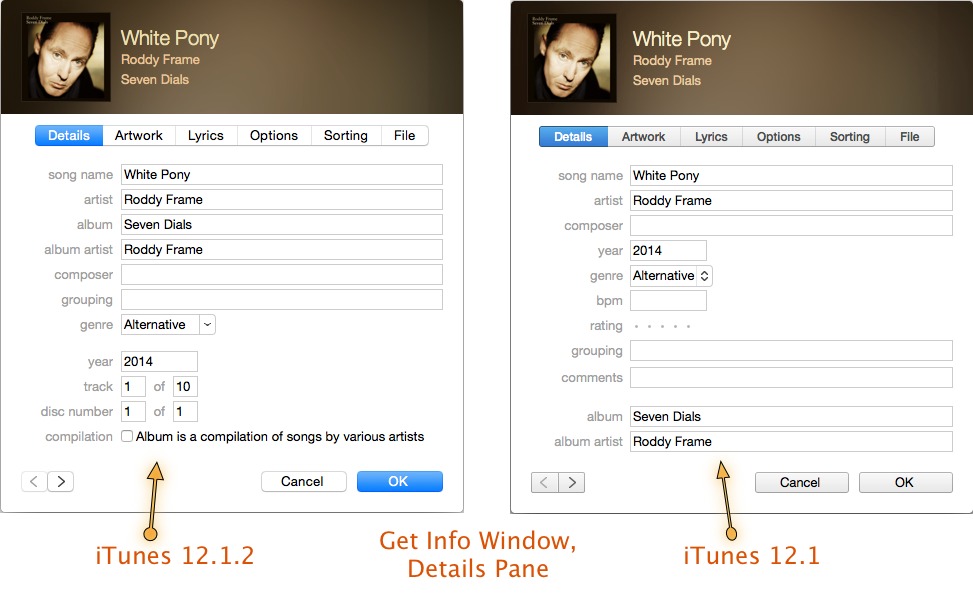 GraphicConverter 9.6.1 — Lemkesoft has issued GraphicConverter 9.6.1, a maintenance release with a modicum of updates to the venerable graphic conversion and editing utility. The release improves HPGL import, adds an option to disable tooltips inside an image, increases a JPEG’s special file size limit to 8192 KB, adds support for PDC metadata date when renaming by EXIF date, fixes a bug during smart crop of large files, addresses an issue related to batch conversion of multi-page PDFs, and fixes a problem with the Copy command in the contextual menu. ($39.95 new from Lemkesoft or the Mac App Store, free update, 234 MB, release notes, 10.7+)

1Password 5.3 — AgileBits has released 1Password 5.3 for Mac, improving how the password manager handles two-step verifications with Time-Based One-Time Passwords (TOTP). Used for adding an extra layer of security when logging into sites such as Dropbox and Tumblr, TOTP logins are one-time passwords that are automatically generated for you and expire within a short period of time. You’ll need to first create a TOTP field for a login item in 1Password. After selecting a login and clicking the Edit button, click a blank label field under the
Section heading, give it a name (such as TOTP), and then press the Tab key twice. Next, click the circular ellipses at the right side and choose One-Time Password from the pop-up menu. From there, you can copy and paste a text code into the text field, or click the QR code icon that appears and move the barcode scanner that appears over the QR code that’s provided by your online account. (For more on adding TOTP to 1Password 5.3, see this tutorial video.)

Security Update 2015-004 (Mountain Lion, Mavericks) — Apple has issued Security Update 2015-004 for OS X 10.8 Mountain Lion and 10.9 Mavericks, mirroring many of the security fixes that are included with the concurrently released 10.10.3 Yosemite (see “Apple Releases OS X 10.10.3 with Photos,” 8 April 2015). The wide-ranging security update patches multiple vulnerabilities in Apache, a use-after-free issue in CoreAnimation, multiple memory corruption issues in the processing of font files, a memory corruption issue that existed in the handling of .sgi files, several issues related to IOHIDFamily, and multiple vulnerabilities in OpenSSL. Security Update 2015-004 is available via Software Update or via direct download from Apple’s Support Downloads Web site. (Free. For 10.8.5 Mountain Lion, 176 MB; for 10.9.5 Mavericks, 112 MB)

Safari 8.0.5, 7.1.5, and 6.2.5 — Apple has released Safari 8.0.5 for OS X 10.10 Yosemite, along with Safari 7.1.5 for 10.9 Mavericks and Safari 6.2.5 for 10.8 Mountain Lion. All three improve AutoFill compatibility with Web page forms and prevent saving of Web site favicon URLs used in Private Browsing. Additionally, the updates patch several security vulnerabilities, including an issue in Safari’s client certificate matching for SSL authentication that could enable tracking by malicious Web sites, an inability to purge browsing history completely (as well as an issue that could reveal browsing history when
responding to push notifications in Private Browsing), and multiple memory corruption issues in WebKit. All three versions of Safari are available only via Software Update. (Free)