I am a militantly self-reliant Apple Store shopper. I have nothing against the smiling Apple workers in the colorful t-shirts, but I just want to be left alone.

To get a decent look at the new Apple Watch and its accessories, though, I needed to make an attitude adjustment — and an appointment.

Since 10 April 2015, Apple has been offering would-be Apple Watch buyers 15-minute, one-on-one sessions as a way to get more comfortable with both the smartwatch and the prospect of dropping a hefty sum for the timepiece and its assorted bands.

Without such an appointment, your options are more limited. You can gape at the different watch models — the basic Apple Watch Sport, the “intermediate” stainless-steel Apple Watch, and the high-end gold Apple Watch Edition — along with their various bands in a retail-store display case. But you cannot touch them because they are under glass. 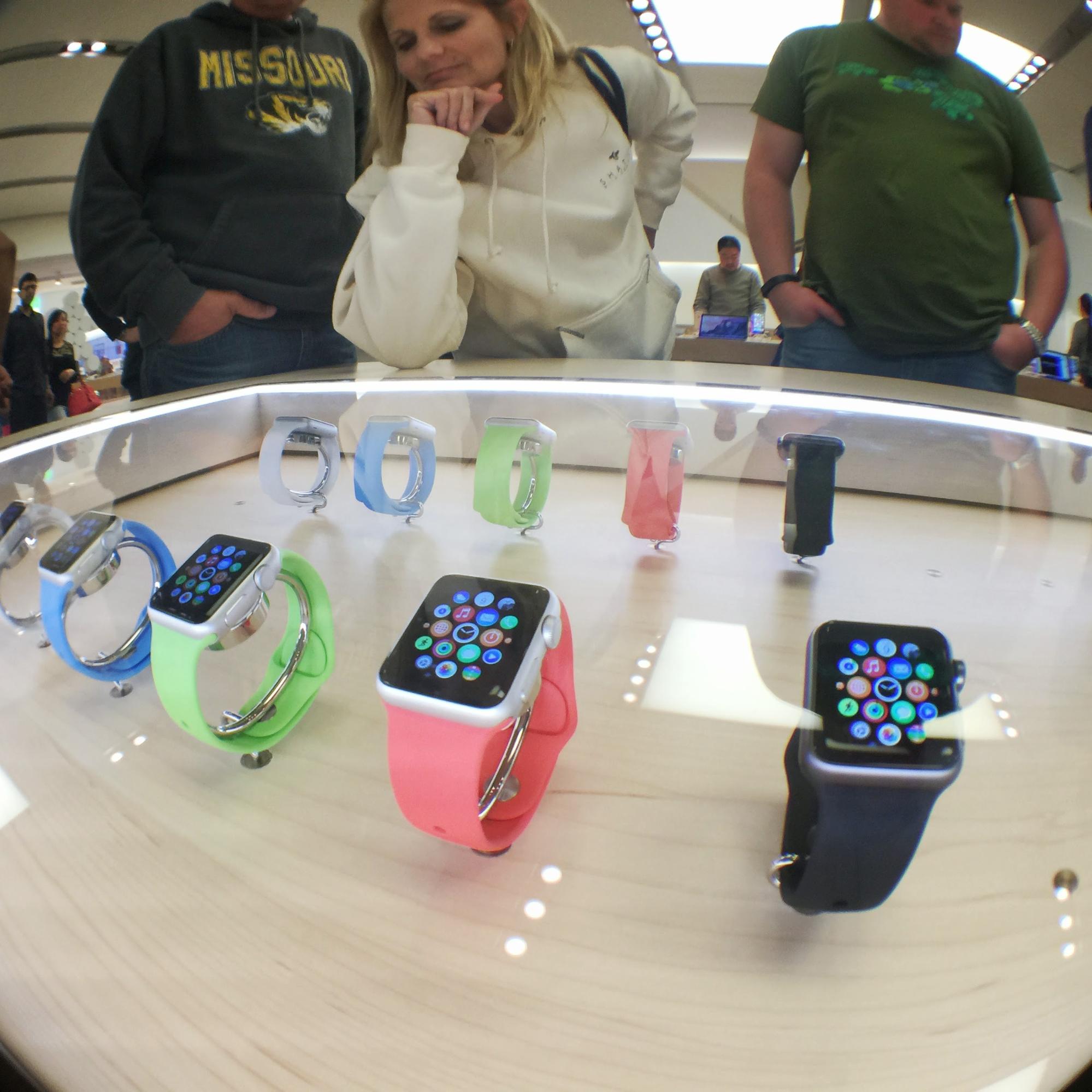 Functional sample timepieces are on demo tables, but their basic black bands are embedded in table-top displays and cannot be swapped out with other bands, such as the fancier leather and metal variants. The demo watches are for interface interaction only.

So, suppressing my distaste for retail interaction, I made an Apple Watch appointment and resigned myself to an up-close-and-personal exchange with a store staffer. In fact, I made multiple appointments at four of the five Twin Cities, Minnesota stores closest to my St. Paul home.

To my surprise, I had fun. The try-on sessions were more enlightening than I expected, and the employees were without exception enchanting people. I came away impressed with how Apple is taking a new retail tack to build buzz about its latest product. It appears to be a winning strategy.

Those who have tried the Apple Watch in stores have reportedly been likelier to buy them, according to retail analysts who interviewed store staffers. Opening weekend sales of the Apple Watch are being pegged by analysts at about 2.3 million, though it is odd that the normally forthcoming Apple has said nothing official about pre-order volume. And the start of in-store Apple Watch sales has reportedly been pushed to at least June.

Making an Appointment — The road to Apple Watch enlightenment begins on Apple’s site — specifically, on an Apple Store’s Web site, which has a link to an appointment page. 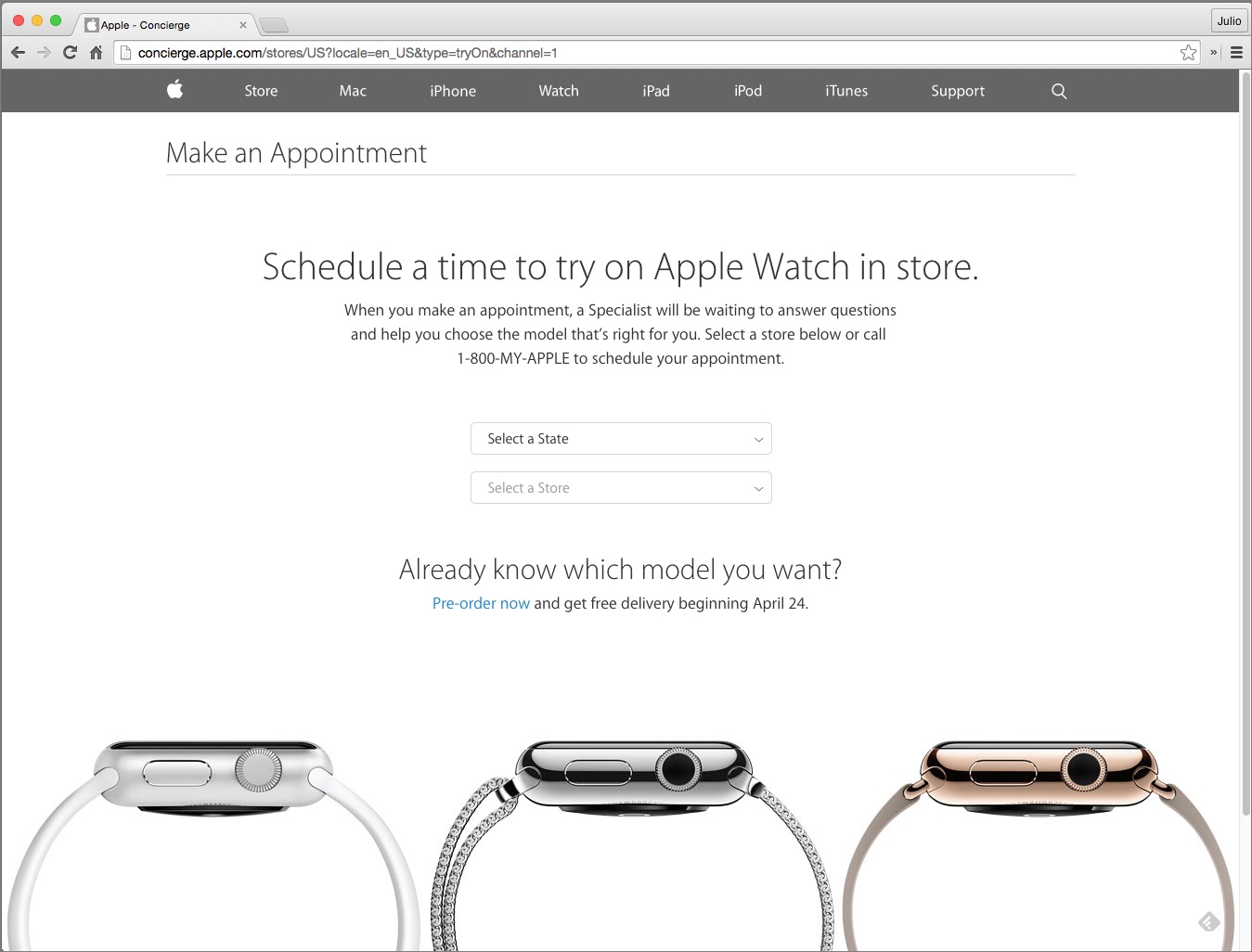 On that page, I was prompted to confirm my state and store, and then asked to log in to my iCloud account. I then tapped an available time slot to lock in an appointment. 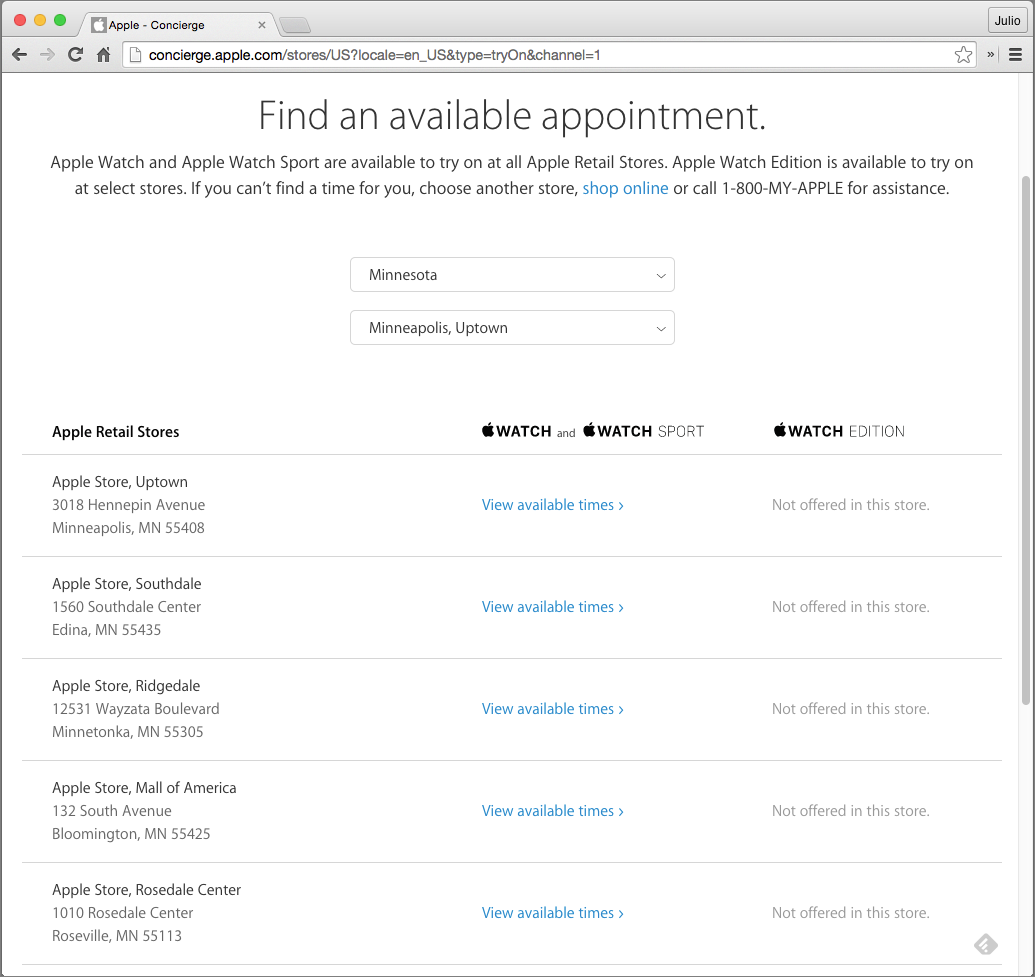 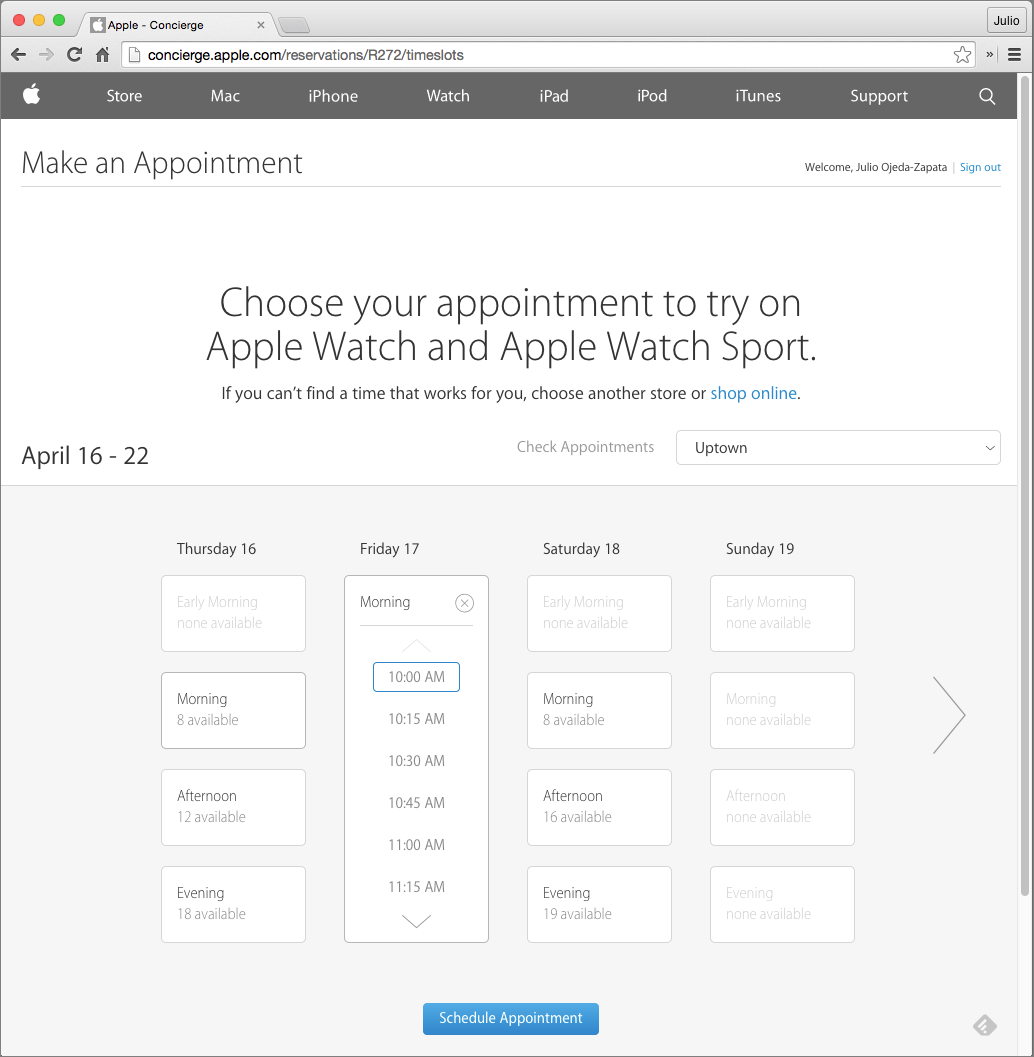 Arriving at the store just prior to my designated time, I checked in with an Apple employee who had a list of appointments on a handheld iOS gadget. I was then handed off to another staffer who would lead my try-on session.

Secret Watch Drawer — An Apple Watch try-on has an air of mystery because the watches are hidden away in demo table drawers that can be opened only by Apple store employees. They used some kind of RFID chip attached to their iOS gadgets to unlock the drawers with a tap. 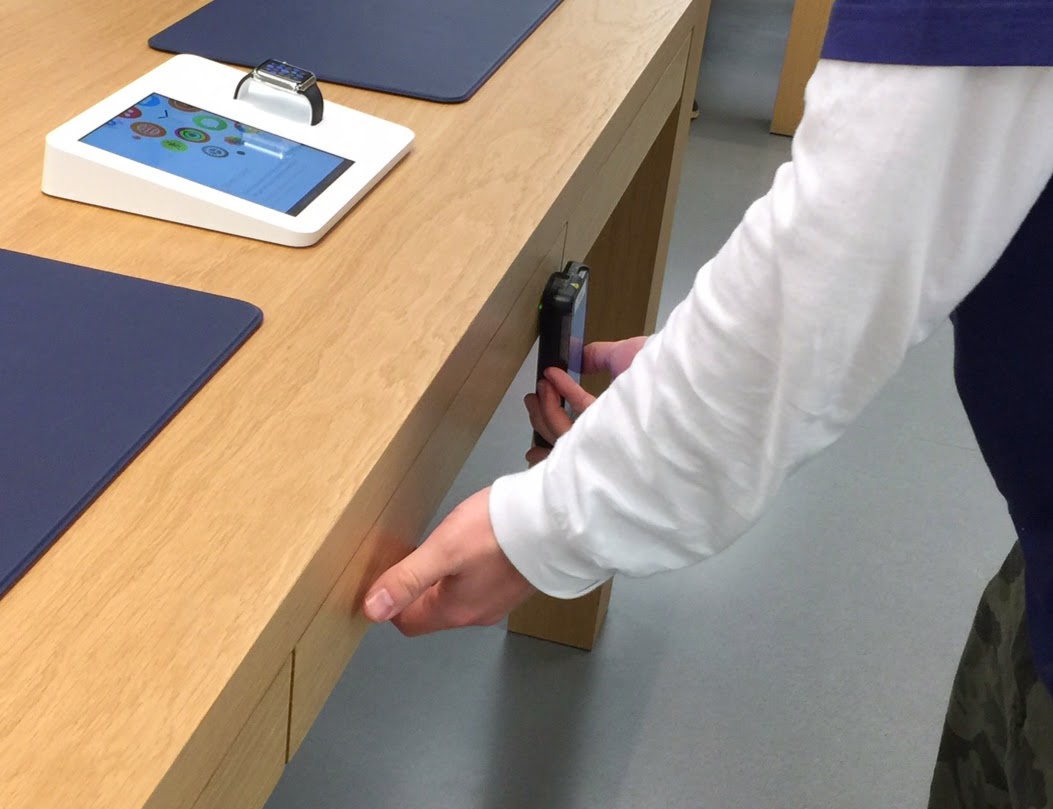 In the drawer, various watch-and-band combinations are organized tidily in compartments, each with its own charger. 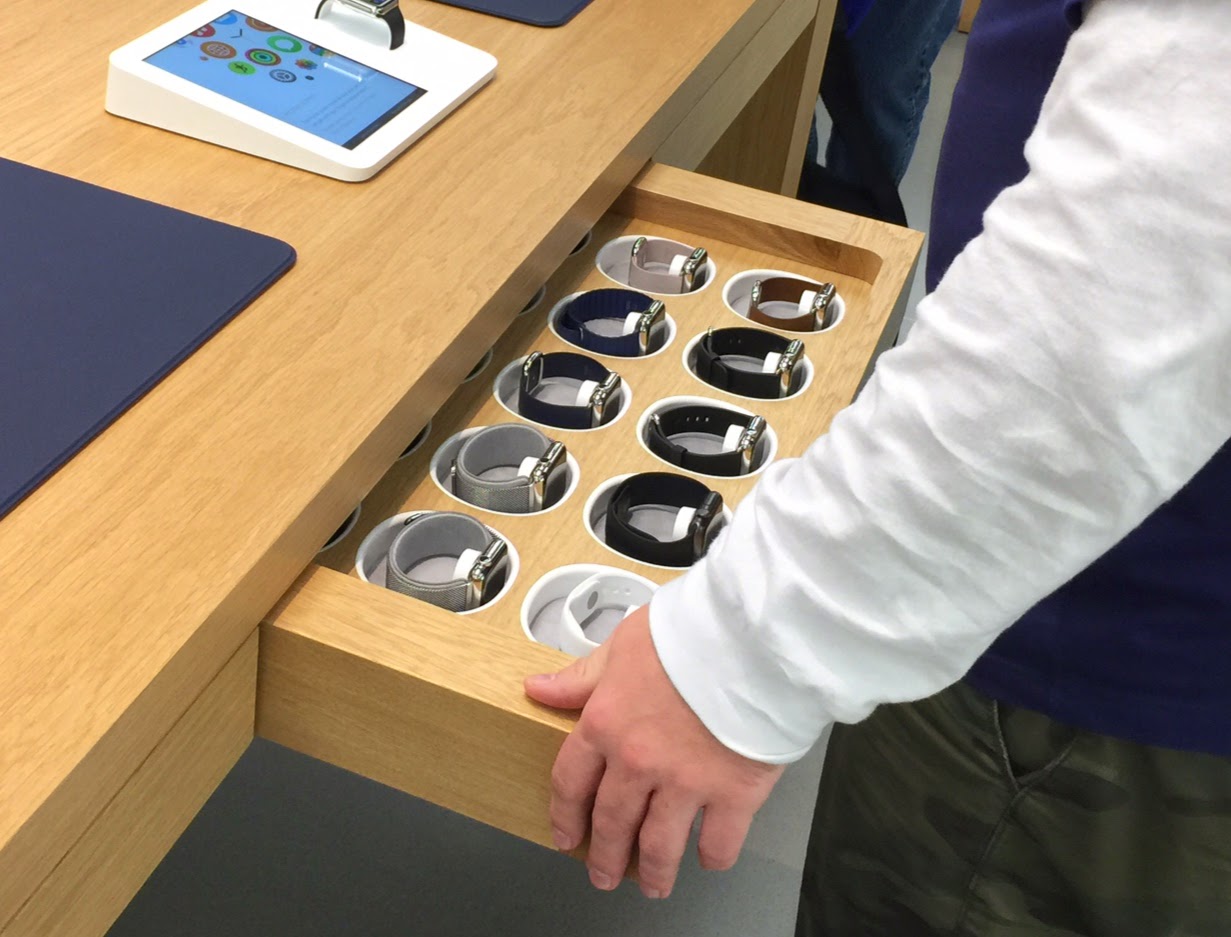 I pointed to the watches I wanted to try, and they were promptly strapped to my wrist. I had enough time for a half-dozen such try-ons during a typical session. 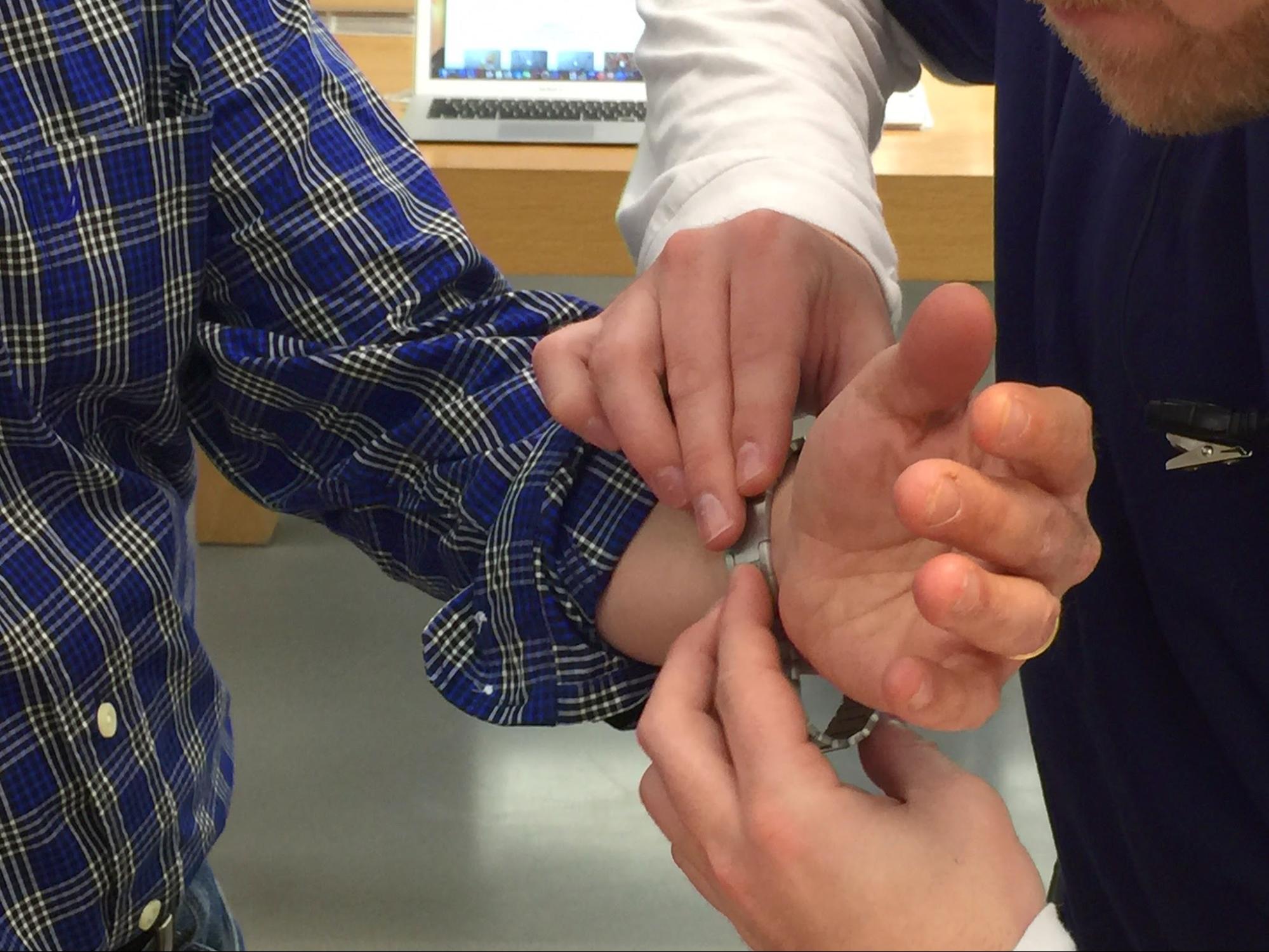 But the Apple staffers would not grant every wish. At one store, I wanted to try some of the fancier bands with the entry-level Apple Watch Sport, which is doable in the strictly mechanical sense. For reasons I could not glean, my request was politely but summarily denied. That is odd because this has not been a problem at other stores, according to tech-blog posts I’ve read.

Picture taking is a part of the experience. Store workers will sometimes volunteer to use a visitor’s phone for getting choice shots. I brought my buddy Mark Fawcett along for one of my appointments to document my session. Management was fine with this — though at one point they politely asked that photos showing the store employee’s face not be posted online.

No Edition for Me — Most who yearn to try on the fancy Apple Watch Edition are in for a disappointment. Apple Watch Edition try-on appointments are being taken at only a small percentage of Apple Stores and, to my surprise, none are in the Twin Cities. To see the watch, I would need to drive about eight hours to Chicago (where, curiously, not one but two stores offer such ritzy try-ons).

I’ll pass. Realistically, even the stainless-steel model is out of my price range, so it’s not like touching an Apple Watch Edition has any practical purpose for me. Still, I must confess to bafflement at why I can’t try it at my local stores when they’re showing it off in display cases. 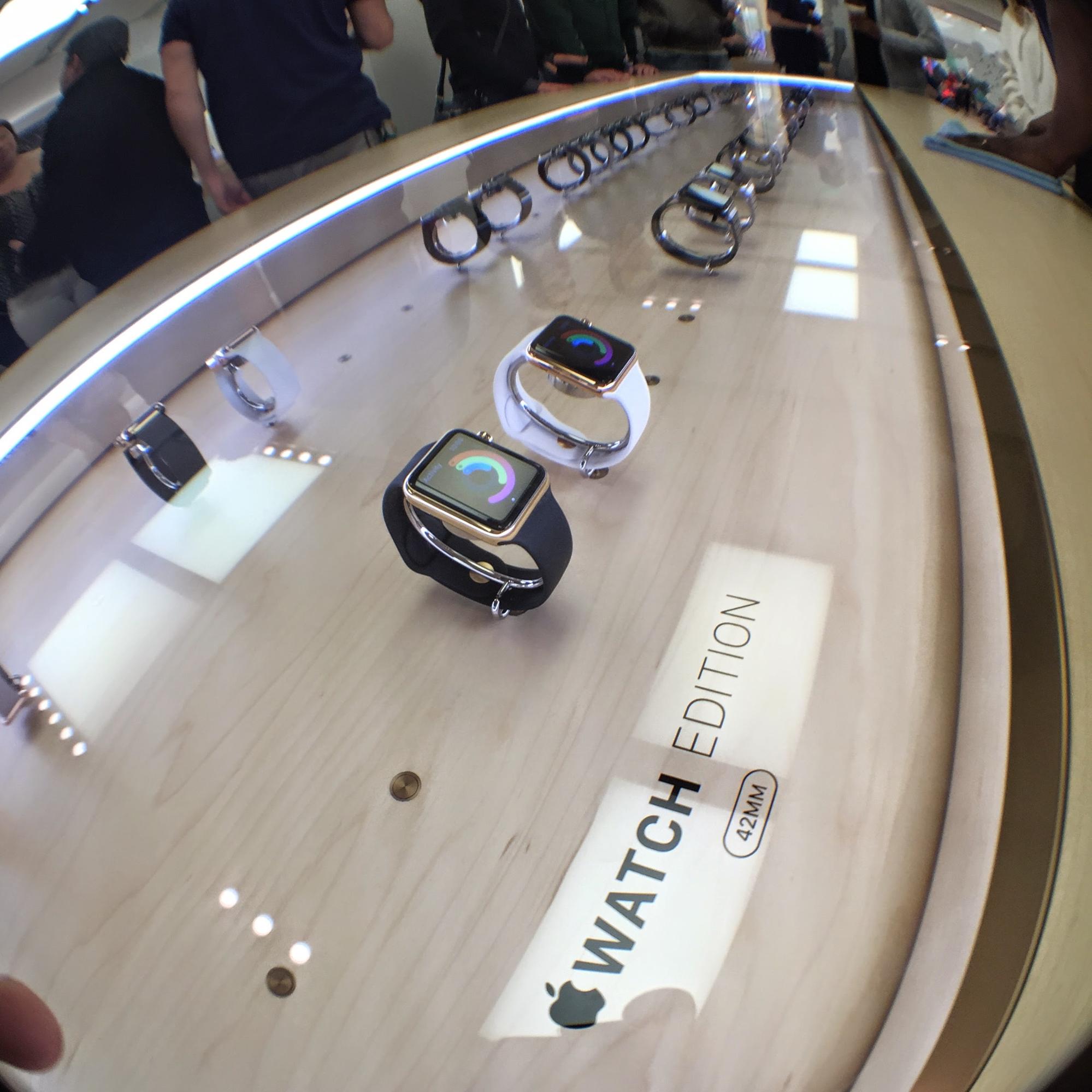 Which Watch Size? — The try-on sessions were extremely useful in answering questions that had nagged at me ever since the Apple Watch was revealed in September. The biggest of these: which watch size is best for me, 38mm or 42mm?

I had made a number of early, tentative assumptions that turned out to be off the mark. I have petite wrists, for instance, so I was sure the smaller watch would be an ideal fit. I had scrutinized pictures and videos of both watch configurations, and the bigger model seemed hideously bulky to me even on wrists wider than mine.

So, when trying on the watches, I was surprised to find I disliked the 38mm one. It struck me as intolerably small. The 42mm version felt and looked just right. Big it is.

Which Watch Bands? — Shopping for watch bands is more complicated because there are lots of them in a variety of styles, colors, and materials, including leather, metal, and a rubber called “fluoroelastomer.” The watch bands might be the most important reason Apple started providing try-on sessions, since they’re reminiscent of jewelry-store visits — and the Apple Watch is, for all intents and purposes, jewelry.

As with the watches, I learned a lot about the bands, and found myself discarding some of my online-spawned opinions.

Sport Band: Realistically, this is the only band I would buy to stay within budget. An entry-level Apple Watch Sport comes with three fluoroelastomer pieces that can be configured into either of two bands of differing sizes. My big worry? Sport Bands seemed stiff and plasticky in photos, but they are actually very soft and comfortable, if not breathable. 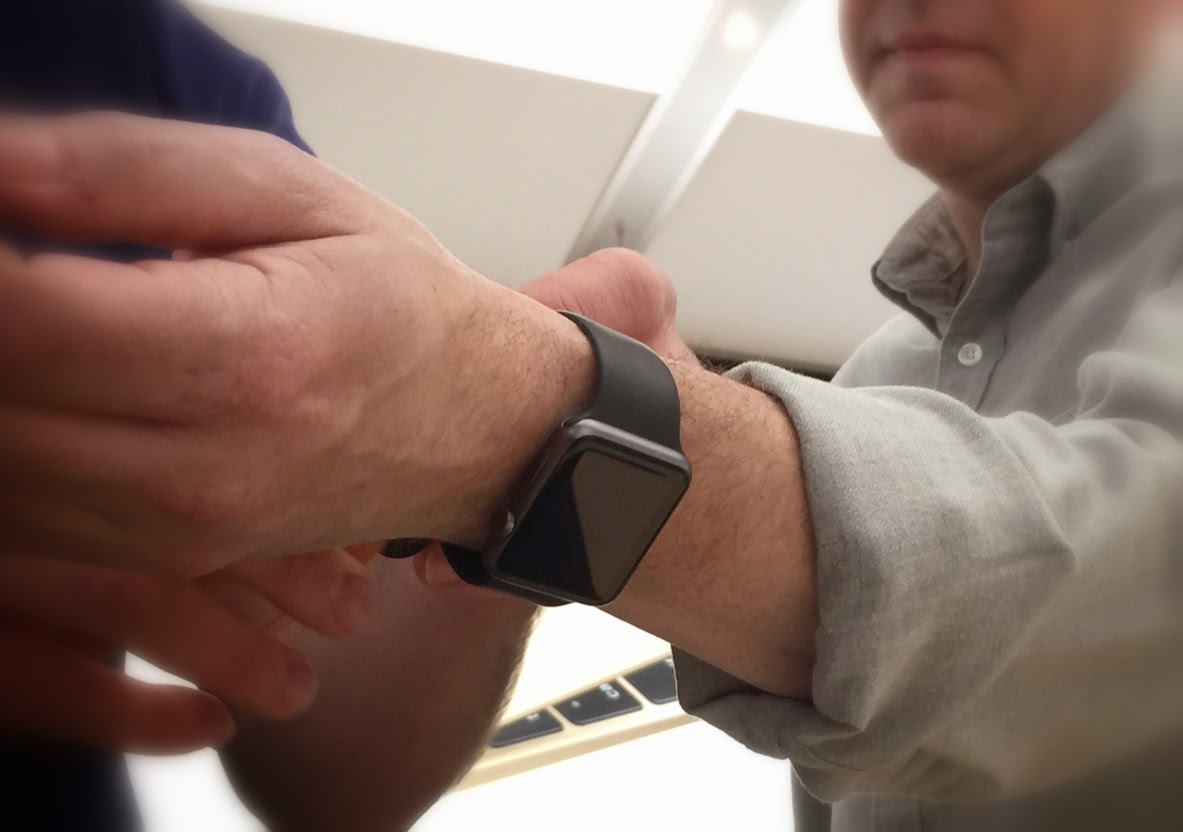 Milanese Loop: Made out of stainless-steel mesh, this band wraps comfortably around the wrist and snaps into place with a magnet. I had dismissed it out of hand based on Internet intel (too feminine for my taste), but I found myself liking it a lot in the store. For dudes, it helps to think of the metal mesh as chainmail. 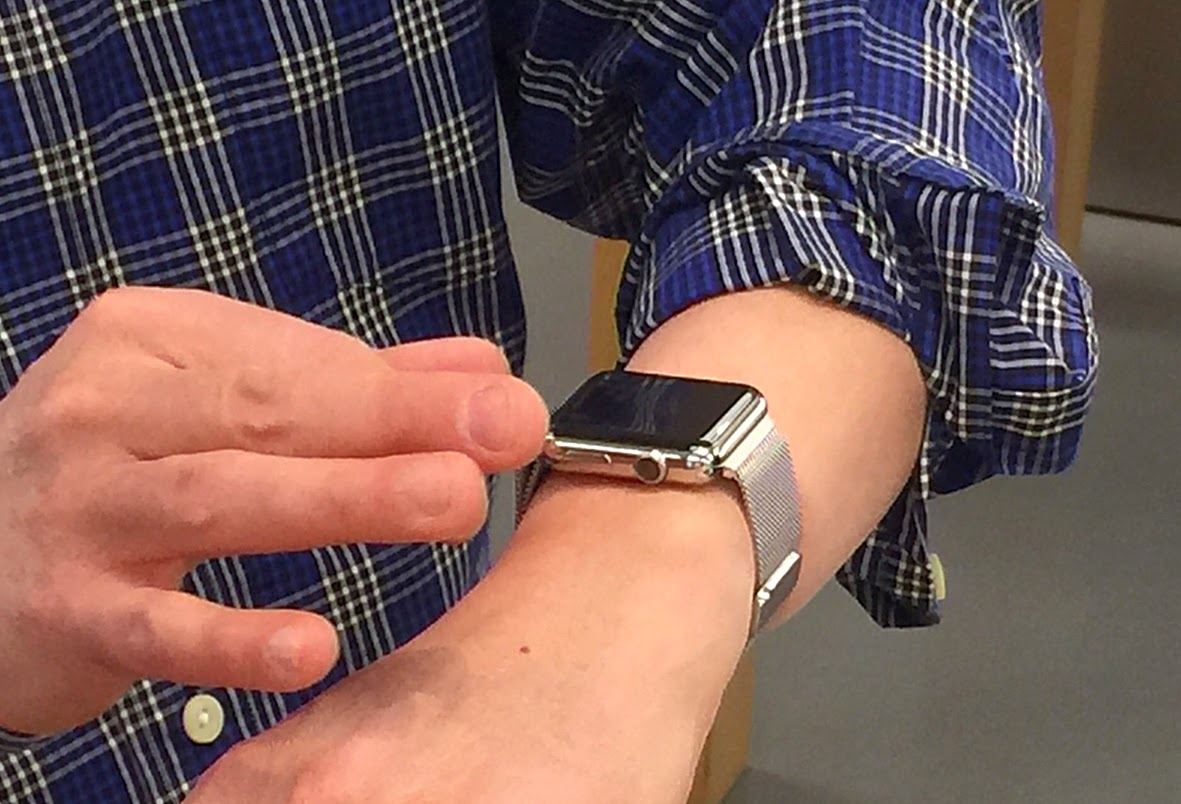 Link Bracelet: This rather masculine metal band is made of interlocking links that can be removed without tools (just push a little button) for a better fit. The band doesn’t suit me, but it’s one my dad would use. Some have voiced concern about arm hair getting snagged in the spaces between links, but that didn’t happen to me. 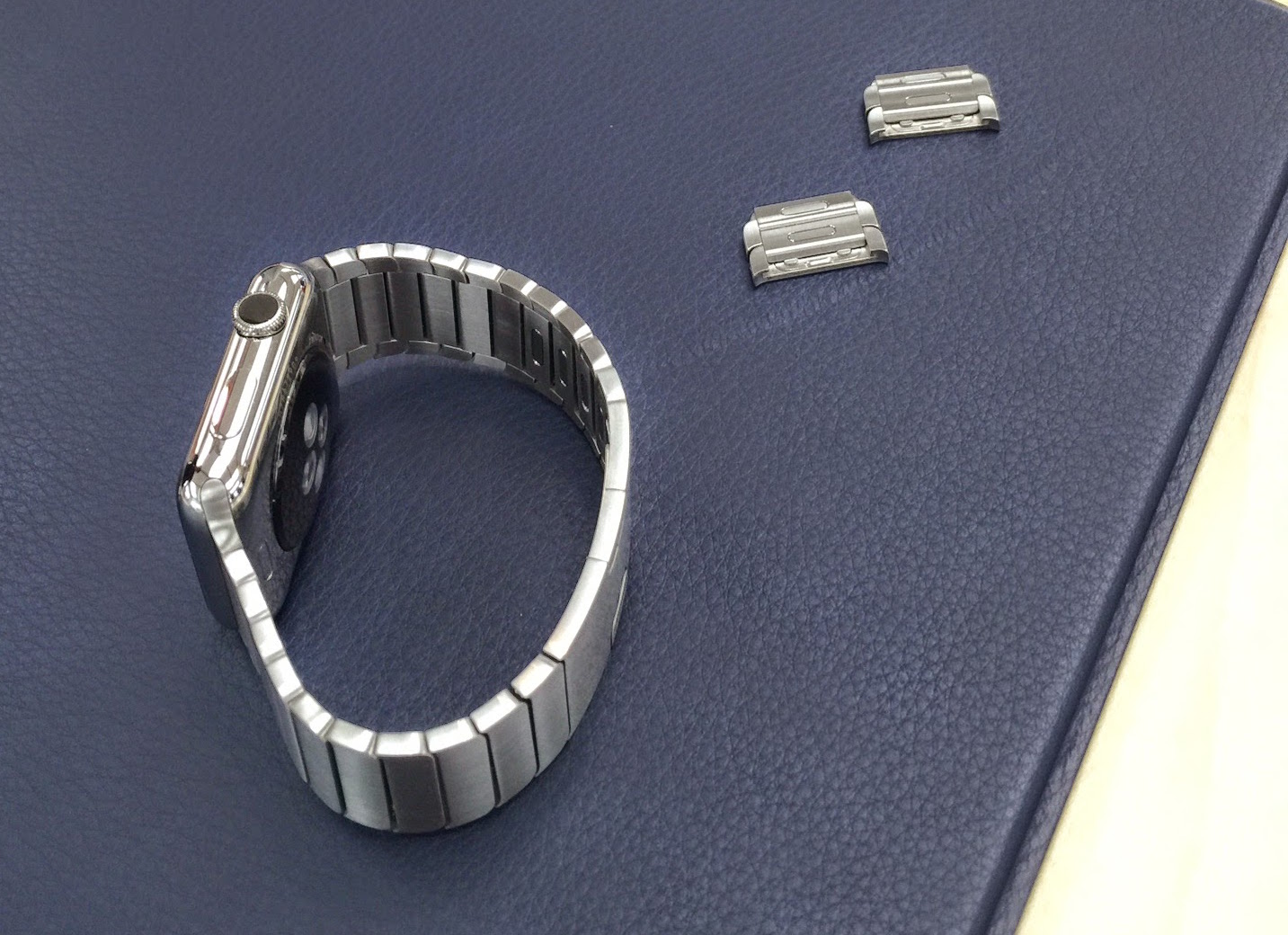 Leather Loop: This band works roughly on the same principle as the Milanese Loop, with a long Italian-leather strip that wraps around a wrist, and snaps into position with magnets. The band’s quilted design has a vaguely “2001: A Space Odyssey” vibe and is a bit more comfortable than the metal bands. I like it a lot. 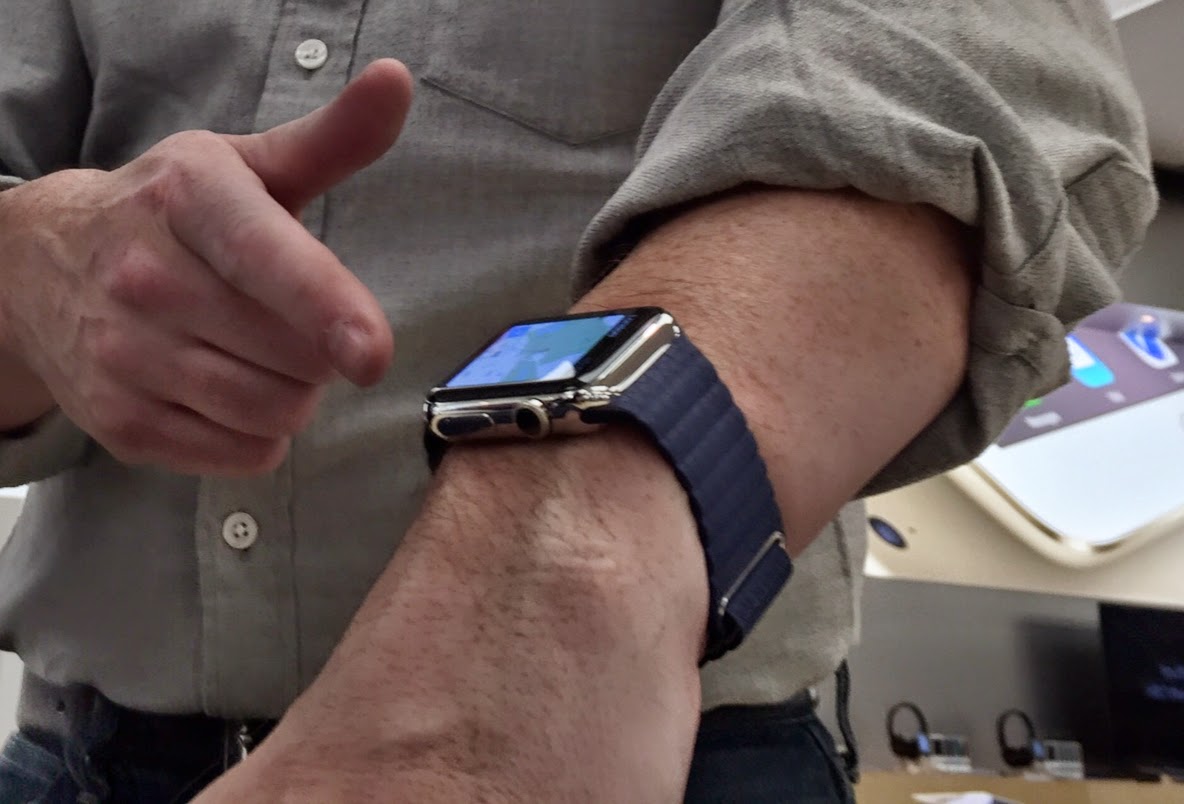 Classic Buckle: Back when I wore wristwatches decades ago, I had a fondness for supple leather bands with clearly visible stitching. Apple has nothing like that, but its Classic Buckle comes closest. This band’s Netherlands origins aren’t a selling point, and it honestly does not look all that sophisticated to me, but I like simplicity, and this watch band delivers. I’d get it in black. 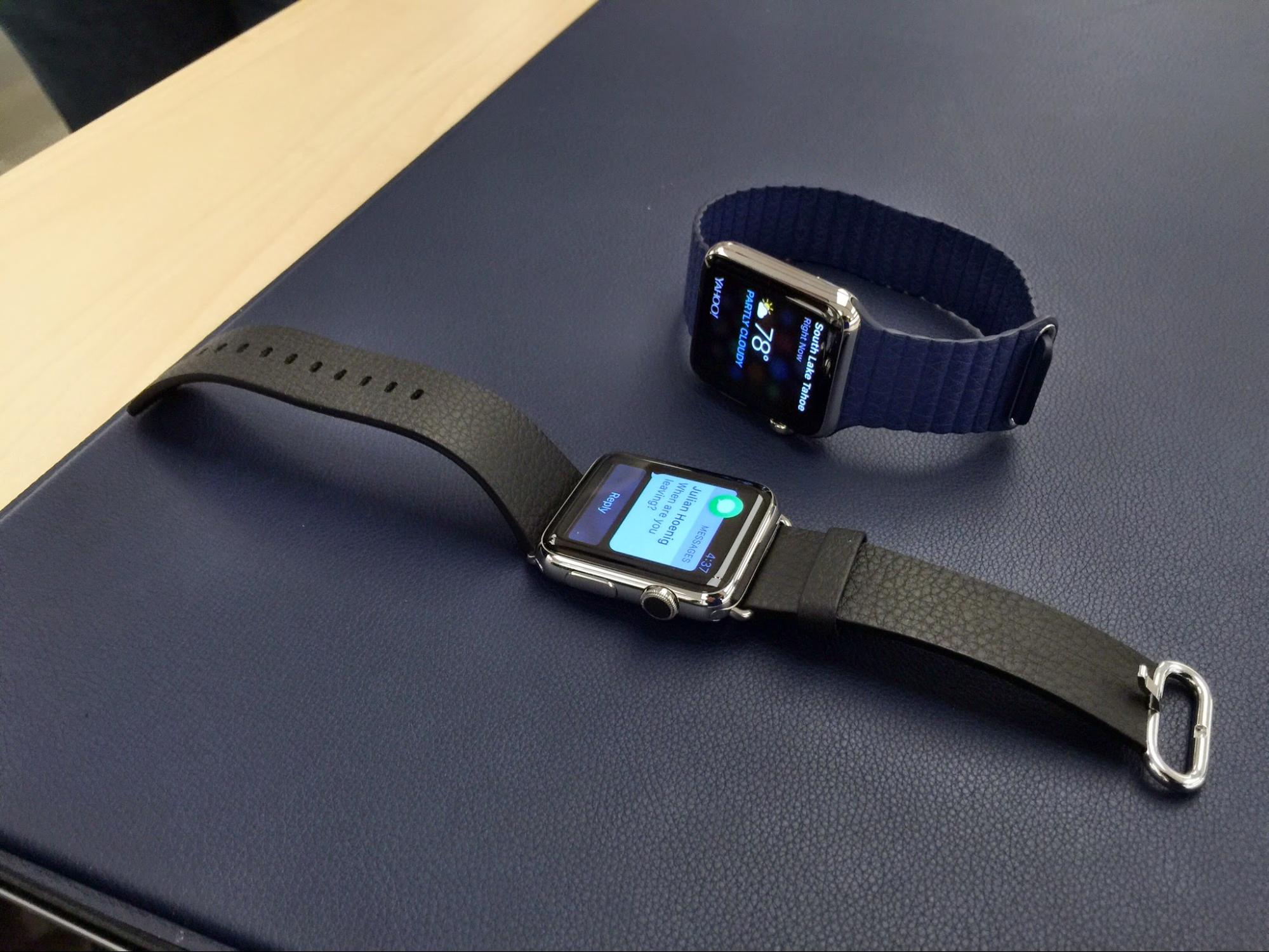 Modern Buckle: I like this band the least, mostly because of its big, garish metal buckle consisting of two magnetic pieces that snap together. The band is French leather with an inner layer of Vectran, once used by NASA for the Mars Rover’s landing airbags. Despite that impressive heritage, I felt goofy wearing it.

A Promising Smartwatch — I’m not in a position to pass judgment on the Apple Watch based on demos with only stock Apple apps. But I did like what I saw and think it shows promise.

Learning how to use it takes a little while, so I placed my MacBook next to a demo unit at the Mall of America’s Apple Store in order to train myself via Apple’s own guided-tour videos. I felt competent within about 15 or 20 minutes.

The main interface, consisting of a cloud of app icons, is genius. Siri makes a bit more sense to me on a watch than on a phone, and it understood me remarkably well amid the store noise.

A few random observations: I love the Mickey Mouse watch face. The heartbeat-sending thing is still stupid. Pictures on such a cramped screen seem pointless, but the Apple Watch may be a game-changing gadget for phone calls, messaging, mapping, music control, and as an Apple TV remote.

I saw little of the sluggishness that bedeviled tech journalists lucky enough to score early review units, but I was trying retail-demo devices in a virginal state, without any third-party apps in still-rough form to muck up the works.

Overall (and this a very preliminary assessment), I like the Apple Watch a lot. I’m looking forward to more thorough testing.

Strap Up! — I was initially skeptical of Apple’s try-on program, dismissing it as a hype-generating stunt. It is that, but I also enjoyed the process more than I thought I would, and I came away with an improved understanding of the Apple Watch ecosystem — and with many of my preconceptions dismissed.

If you have not ordered an Apple Watch yet (or, heck, even if you have) and you are near an Apple outlet, make an appointment, and go have fun. I promise you won’t regret it. 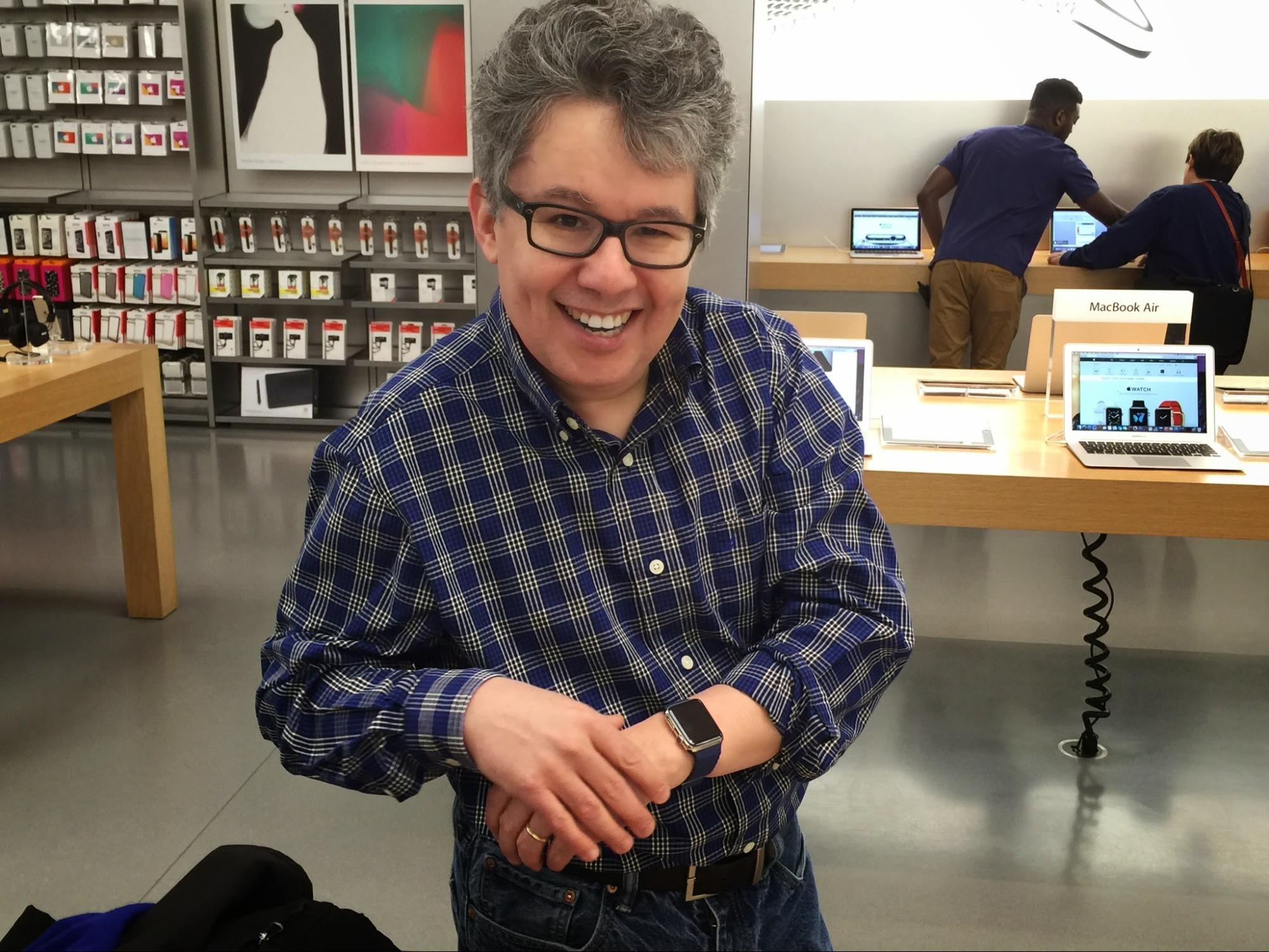 Comments About Apple Watch Try-Ons Are Both Hype and Help