On 28 April 2015, Dropbox announced a new commenting system for files stored in the Dropbox cloud so that you can “have conversations around Dropbox files, both on the files you own and the files people share with you.”

Since we at both TidBITS and Take Control Books use shared Dropbox folders to work collaboratively on a variety of projects, I asked my colleagues if this new feature might soon become part of our ever-evolving workflow. I was asked to look into it and report back. (Thanks, folks!)

To begin with, the commenting system is available only in your browser, either via Dropbox’s own Web interface or the Microsoft Office Online interface with which Dropbox is integrated. That’s not to say the Finder on your Mac can’t play a part: you can choose to create or look at comments with the Finder’s contextual menu when you have Dropbox installed. To do that, Control-click any file stored in Dropbox to see a Comment on this File menu item. 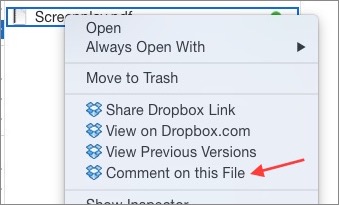 That’s as far as the Dropbox commenting system’s Finder integration goes: when you select that menu item, your default browser opens to the file within the Dropbox Web interface, and the rest of your commenting activities take place in the Comments sidebar there.

Also note that the Finder contextual menu item, and Dropbox’s commenting system itself, applies only to files, not to any folders that might house project files (and about which you might want to open a general conversation), nor to documents that are Mac packages, such as Pages or Numbers documents, and thus appear in the Dropbox Web interface as folders.

After you compose a comment, you click Post, and Dropbox sends your comment via email to everyone with whom the file is shared. The message includes both the comment and a link that opens the Dropbox Web interface so the recipient can respond. 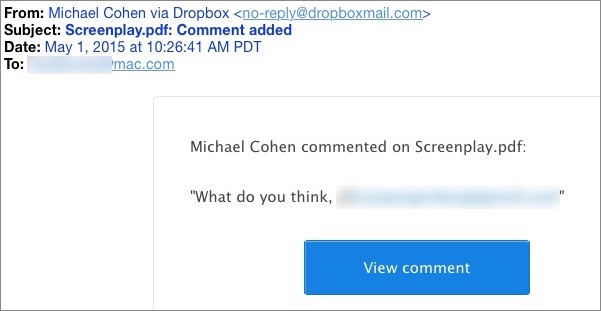 Your discussions are not limited to those users with whom a file is shared; if you include an email address prefaced by @ (for example, “@[email protected]”), which Dropbox calls an “@mention,” a message is sent to that address as well. @mentions effectively share the file as a read-only document with the recipient of the email, who can then comment on and download it.

If you don’t want a shared file to be open for comments, you can disable comments on a file-by-file basis, using the Options menu in each file’s Comments sidebar. 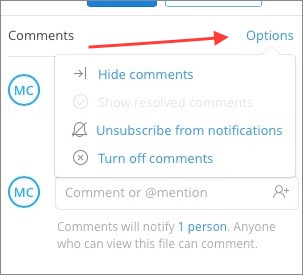 After playing around with Dropbox’s commenting feature for a while, I have to say that while it may be valuable for some, I don’t think it’s a good fit for us at TidBITS and Take Control, due to its file-specific nature and lack of notification control.

Consider Take Control: each Take Control author has a shared Dropbox folder to which many other Take Control authors, as well as editors, have access. Comments on a book manuscript in the Dropbox Web interface would send an email message to everyone with access to the file, even though most of those people would not be involved with that particular project. Without a way to direct notifications to just a subset of those who share the file, the commenting system is useless for conversations about a book project. Furthermore, Dropbox comments might be useful to send a group email to everyone sharing a folder of commonly used assets (such as our Nisus Writer Pro macros), but, alas, comments can be attached only to specific files, not
folders.

In the case of TidBITS, our articles are not stored in Dropbox but in a Subversion repository, so Dropbox comments would be of no use for those. And, while we do share some more general materials via Dropbox, we would again be more likely to comment on a folder containing shared assets for a specific project than on individual files in that folder.

So, for us anyway, Dropbox’s new commenting feature is interesting, but not particularly useful. In fact, without a way to direct comments at just a subset of users, or to apply comments to shared folders, I’m hard-pressed to think of specific use cases where Dropbox comments would be better than alternative methods of having a conversation about a document.

That said, if you can think of good scenario for Dropbox comments, use our commenting system to let us know.