There’s a never-ending stream of tweets, blog posts, and think pieces talking about the state of women in tech. But Jean MacDonald (formerly of TidBITS sponsor Smile), decided to do something about it. In the summer of 2013, she and some friends launched App Camp for Girls, a summer camp that teaches 8th and 9th grade girls how to be developers. This summer, the program will be bigger than ever, with camps in Vancouver, Seattle, and Portland (Oregon).

I’m way too old and bearded to be an app camper, but at last year’s Macworld/iWorld I was lucky enough to attend an App Camp for Girls open house, a two-hour version of the week-long camp (see “App Camp for Girls Rocks Macworld/iWorld,” 11 April 2014). While there, the organizers passed around iPod touches loaded with the quiz apps previous campers had made. The hand-drawn art in the apps was adorable, and I was sad that TidBITS readers couldn’t try them out for themselves.

The App Camp Quiz Compendium is composed of 15 short personality quizzes created by teams at previous App Camps. You can find out what kind of penguin you are (I am apparently a sporty penguin), what super power you have, which social media app you are, or which Hogwarts house you belong to. 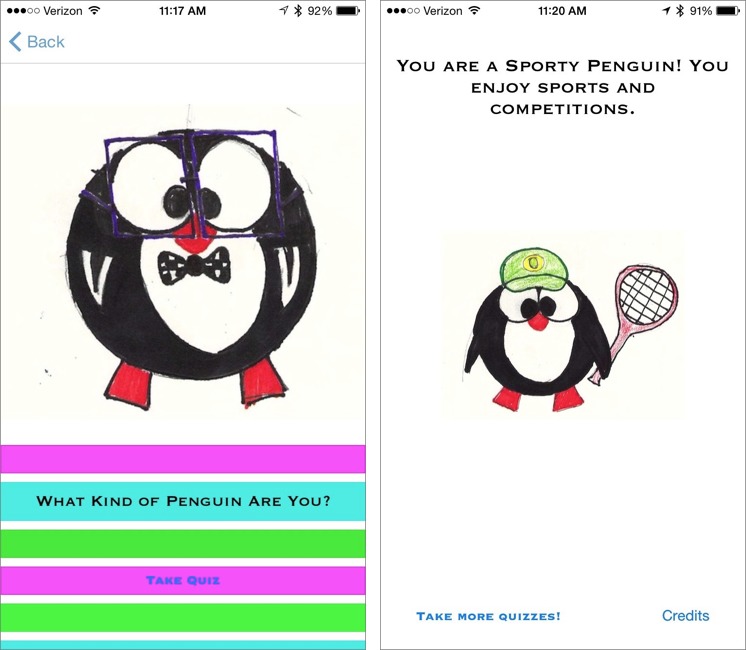 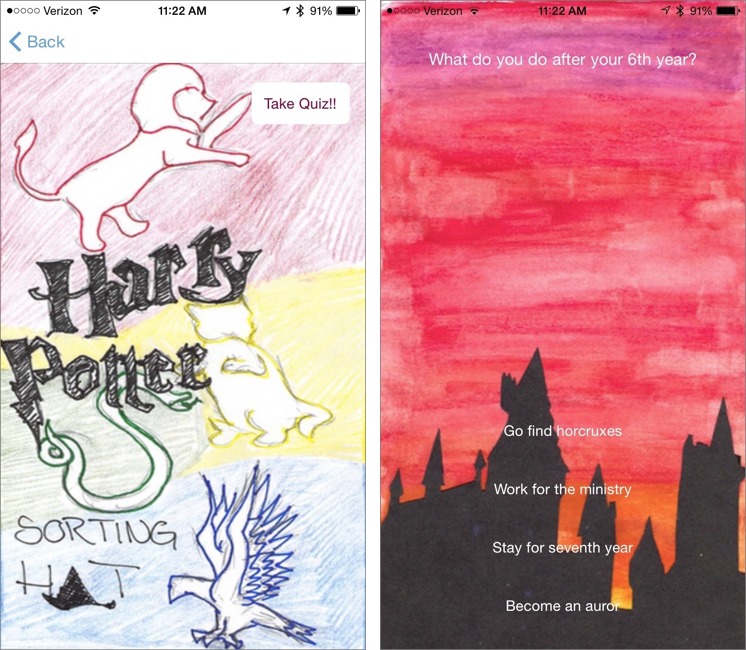 Unsurprisingly, there isn’t much to the quizzes themselves, but the artwork is charming. Hand-drawn art is rare in iOS, and it’s one of those things that either looks great or awful. Thankfully in the case of the App Camp Quiz Compendium, it’s the former.

The App Camp Quiz Compendium offers a few minutes of amusement for $0.99, but more importantly, its sales support a great educational endeavor. Over the course of a single week, App Camp for Girls provides a broad introduction to the process of app development, from brainstorming and designing ideas to building and pitching apps. I’ve seen what App Camp for Girls does first hand, and in my opinion, it could serve as a blueprint for how we educate children about technology and business more generally.

App Camp for Girls Just for Fun
Cookies & Privacy: We wish we were talking about chocolate-chip cookies here, but our Web site—like nearly all others—relies on a few minor digital cookies. Various laws around the world require us to tell you that fact, so consider yourself informed, if not nourished. By continuing to use this site, you agree to our use of these cookies. Cookie and Privacy Notice