So as you may have noticed, we haven’t had many FunBITS pieces lately. That hasn’t been intentional, it’s just that we’ve been busy with other things. But once I saw the free Ditty for Messenger, I knew I had to dust off the ol’ FunBITS desk to tell you about it.

Ditty is the contemporary version of a singing telegram. You enter a message of up to 70 characters, choose a song, and Ditty creates a custom music video out of your message. Ditty includes a generous helping of free songs, such as Beethoven’s Fifth Symphony, Hallelujah, Hail to the Chief, Vesti La Giubba, and Zarathustra. Other songs are available as in-app purchases for $0.99 each, such as The Gambler, Girls Just Wanna Have Fun, I Fought the Law, and Like a Virgin.

Creating your ditty is as easy as choosing a song, typing the message, and tapping the Play button. It then takes a minute or so to create the video, which consists of your music selection, a computerized voice singing your message, and animated text to provide both visual panache and to make sure the message is clear. Like most text-to-speech algorithms, Ditty sometimes mangles pronunciations, so the text is useful. 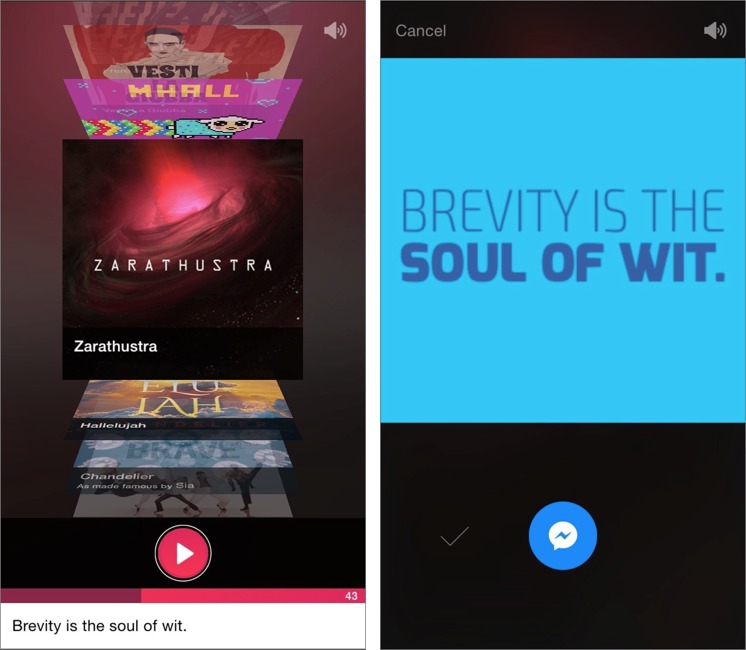 Another oddity is constructing a message so the speech cadence isn’t all wrong, placing the wrong emphasis on the wrong words. I don’t have any solid advice here other than to experiment and see what works.

When you’re happy with the end result, you have two options for sharing: sending the video via Facebook Messenger (thus, Ditty for Messenger) or you can save the video to your iOS device’s Camera Roll. It’s a bit ridiculous that Facebook Messenger is the only built-in sharing method supported, though it’s easy enough to share elsewhere from within Photos. Check out the video that I exported from Ditty to YouTube.

Despite its quirks, Ditty offers free, silly fun with your friends.