When I tell people I’ve written well over 50 books, they tend to narrow their eyes in disbelief, as though waiting for a punch line. But I’m neither joking nor bragging; that’s just what happens when you write books one after the other, pretty much full-time, for 12 years or so. In any case, 50 of those books have been Take Control titles, and having reached that milestone, I think it’s appropriate to have a little celebratory party. That’ll happen on 23 May 2015, and you’re invited!

More on the party in a moment. First, I’d like to share a few thoughts about the unusual experience of writing Take Control books for a living.

The Story — I’d known Adam Engst since the mid-1990s, when I was working at Nisus Software, and I was already a long-time TidBITS subscriber. Adam was gracious enough to write the foreword to my 2003 book “50 Fast Mac OS X Techniques,” and a few months after that book was published, he called me to see if I might be interested in joining him, Tonya, and several other Mac authors and editors for a little “experiment” in electronic publishing. He described the vision for what would eventually become Take Control, and I thought it sounded interesting. I’d recently been laid off from Kensington (where I’d managed software development), meaning I had time on my
hands and needed extra cash.

So I wrote what turned out to be the first book in the series, “Take Control of Upgrading to Panther.” Much to my astonishment, it was an instant, runaway hit. Since that book was so successful and I still didn’t have a job, I agreed to start on another book, about Apple Mail, immediately thereafter. That book was so long that we split it into two titles (one of which dealt exclusively with spam). Those sold well too, so I kept at it. I’d finish a book and immediately start writing another one. Within a few months, I gave up looking for a job, because I was earning a healthy living from Take Control royalties, and I got to work at home, on my own schedule. Although I did other stuff on the side (like creating a briefly popular
Web site called Interesting Thing of the Day), writing Take Control books soon took up most of my time and produced most of my income.

I’ve lost track of the figures over the years, but I think I’ve written somewhere between a quarter and a third of all the titles Take Control has published. That’s not due to extraordinary effort but rather the fact that it was the path of least resistance. People kept buying my books, so I kept writing them. And along the way I began writing for Macworld and other publications, speaking at conferences and user group meetings, and branching out in other interesting ways. It even enabled me to spend five and a half years living in Paris — and then move back to California and buy a house. It’s been a pretty good gig!

“Take Control of Security for Mac Users” is my 50th Take Control title. (It depends on how you count, but I’ll explain how I came up with that figure at the end of this article.) That’s hard even for me to fathom sometimes, but as I look back on all those books, all those thousands of pages of text, I find that it’s been quite a learning experience.

What I’ve Learned — In no particular order, here are some of the things that come to mind as I scan my Take Control titles:

The Future — Take Control is constantly evolving and trying new things, and I’m sure it will look much different in five or ten years. I plan to keep on writing Take Control books for as long as the ratio of time to money makes sense. However, I have to say that writing books at this pace (and keeping a large selection of them updated over a period of years) is exhausting. Last year I wrote seven new Take Control titles, plus updates and new editions, and that’s just not sustainable — even for me.

So I’m trying to shift to an approach where I write fewer titles but work harder to sell more copies of each. Part of that is giving titles a longer shelf life by choosing topics that won’t go completely out of date with the next version of OS X. “Evergreen” titles like “Take Control of Your Online Privacy,” “Take Control of Your Passwords,” and “Take Control of Your Paperless Office” are becoming more attractive than those I know will be all but useless a year from now.

Along the same lines, I’m starting to favor platform-neutral books. Some titles will always be Apple-specific, but when I can write about something like passwords or the cloud in a way that anyone can benefit from, regardless of which devices they use, I give myself an opportunity to expand my audience that much more.

And, although marketing is not my idea of a good time, I’m trying to learn more about it and try new approaches to publicizing and advertising my books. If I could write a mere two or three books a year and sell enough copies to make a living, that would be a pretty relaxing pace for me!

I’m also branching out into new areas, such as my fledgling site Joe On Tech. My long-term plan is to use that site to attract readers that are outside the current demographic for TidBITS and Take Control.

Party On — By my rough count, I’ve sold about 196,000 Take Control books since 2003. I don’t have the patience to figure out how many unique customers that works out to, but let’s just say many tens of thousands. I wish I could invite all of them over to my house for a barbecue to celebrate Book #50, but since that might pose some wee logistical challenges, let’s do the next best thing and have a virtual party!

On Saturday, 23 May 2015, from roughly 10:45 AM to noon Pacific Daylight Time, I’ll be in a Google Hangout, to which you’re all invited. You’ll have to supply your own food and drinks, but I’ll provide what you might call “party favors” for all attendees. I’ll tell stories, show you some interesting artifacts, and answer questions about anything (Mac stuff, writing, food, my time in France, whatever). There will also be guest appearances from other TidBITS and Take Control personalities. If you’ve ever wanted to hang out and chat with a very slightly famous author, this is your golden opportunity.

To join the party (which you can sign up for ahead of time), go to Joe Kissell’s 50th Take Control Book Party on Google Hangouts On Air. Once there, you can click the Yes or Maybe buttons to indicate that you want to attend. We’re not entirely certain what happens after that, but we anticipate that Google will send you reminders if you sign up early. (If you don’t want to log in with a Google account, it seems that you can just start the video at the appropriate time, but you won’t be able to comment or ask questions.) It would be good to have Google Chrome installed (since it’s likely to work better than Safari or Firefox), and you’ll probably need the Hangouts plug-in, if you want to install that ahead of time. Once the party starts, click the triangular Play button on the video to join in, and you can click a grid-like icon at the top of the screen to reveal the Q&A app’s sidebar, from which you can ask and vote for questions. 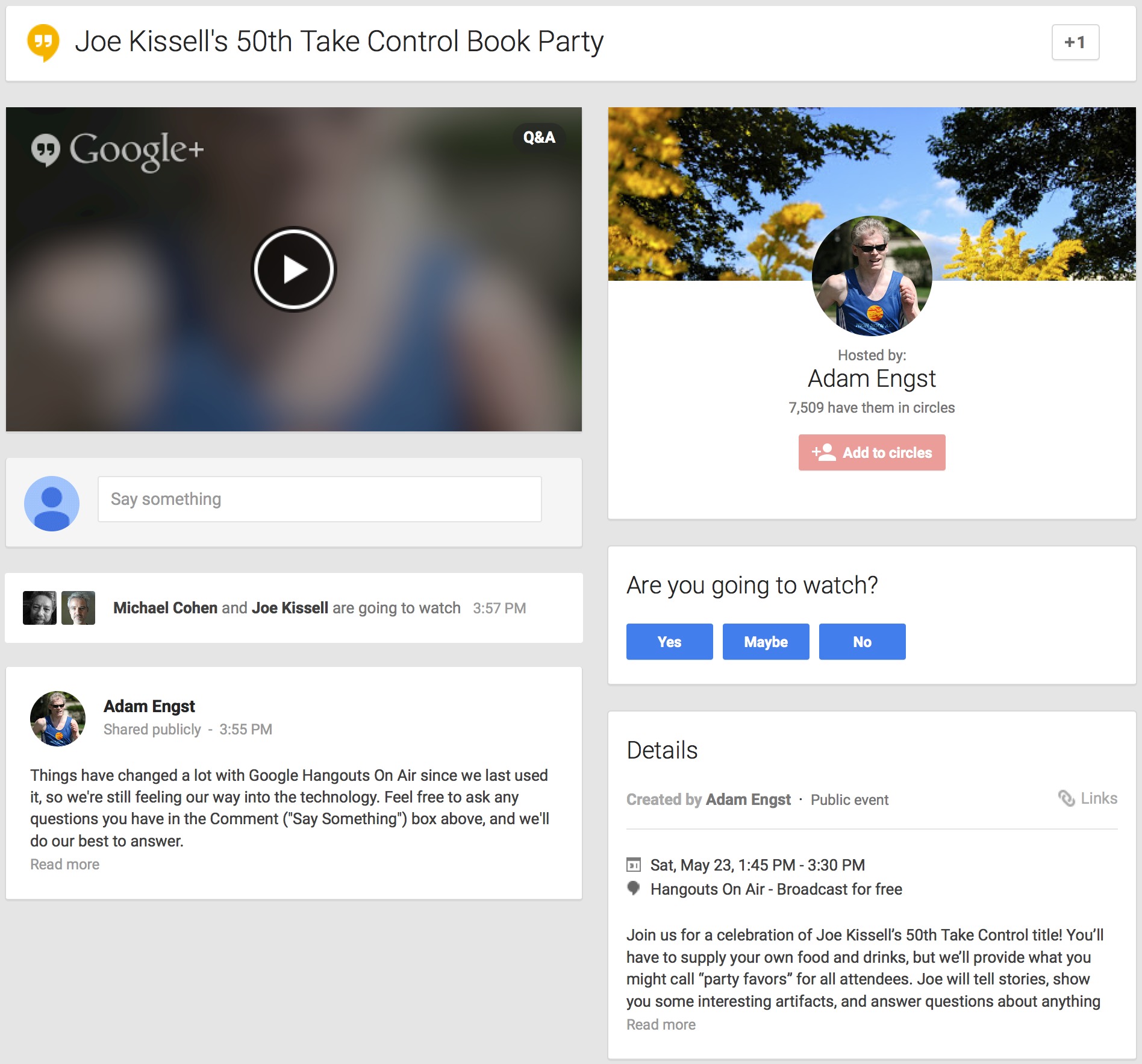 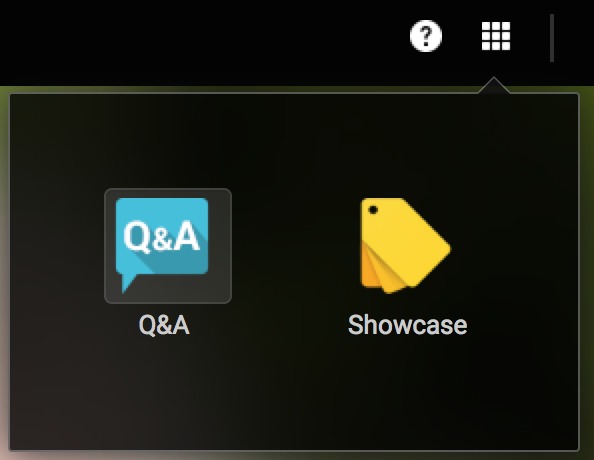 And now, a coda about the confusing task of counting books.

A One, and a Two, and… — Although I’m comfortable saying I’ve written “over 50” books, I can’t give you an exact number. Counting my own books is a curiously difficult undertaking, especially when it comes to Take Control.

After my first book was published in 1996 (“The Nisus Way”), I could say unambiguously that I had written one book. (Unless you want to count “Arnold and Sam, the Two Dragons,” which I wrote when I was seven, or my Master’s thesis in Linguistics from 1991. We’ll ignore those.) My second conventional book (“Cyberdog: Live Objects on the Internet”) had a coauthor, so I wasn’t sure if I could claim to have written two books at that point, or 1.6 books. But by the time I’d written “50 Fast Mac OS X Techniques,” I felt that rounding up to a total of three was reasonable. (Add “Mac Security Bible” from 2010, and we’re at a solid four old-fashioned, printed books.)

When Take Control came along, we had a number of discussions about whether these newfangled ebooks (some of which were also available in print-on-demand form) even counted as “books” at all. Part of me wanted to downplay their significance; after all, there is a qualitative difference between a 600-page paper book put out by a major mainstream publisher and a 90-page PDF from a tiny, unknown publisher in Ithaca, NY. But the process of writing, editing, and publishing a Take Control ebook is almost identical to what I’d gone through with conventional books, the only difference being the very last step of how (or whether) the book is printed. The quality is arguably better, because a number of experts weigh in on the text before
it’s published. And length is irrelevant; just count the number of pages in a Dr. Seuss book! So I quickly came around to the position that Take Control titles are every bit as deserving of the term “book” as anything else I’d written.

So, you could pretty much pick any number and make a case that I’ve written that many Take Control books, but the way I came up with 50 was by counting distinct titles. Here they are, in the order in which they were published:

And yes, I’m already working on Book #51! I have no idea how high this list will eventually go, only that I’m not planning to stop any time soon.

Hope to see you at the party on May 23rd!