But how you install the update isn’t immediately obvious. Don’t bother looking in the settings on the watch itself. Instead, open the Apple Watch app on your iPhone, and then, in the My Watch view, tap General > Software Update. Before you tap Download and Install, you need to do the following: 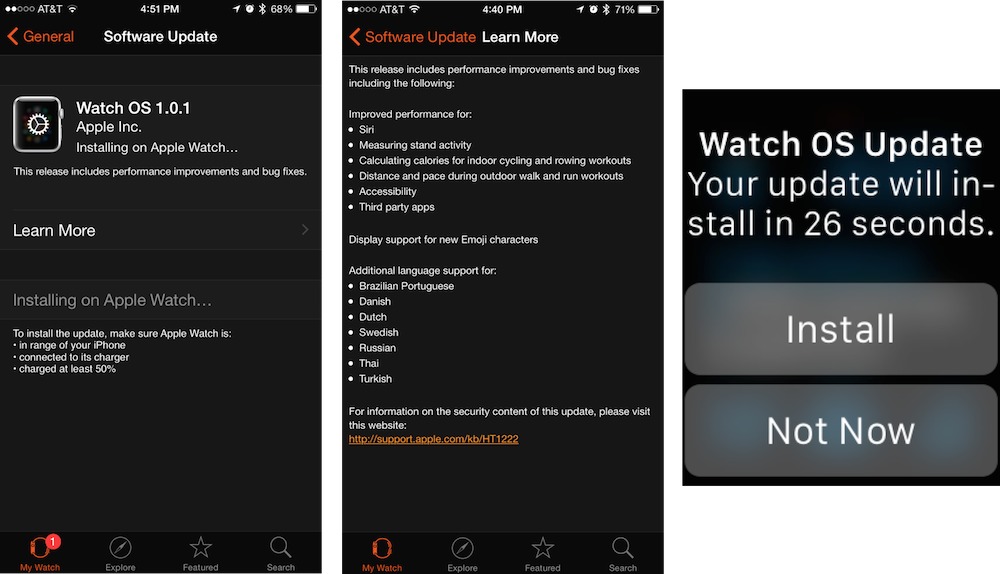 Apple’s goal here would seem to be to prevent a partial update from bricking your watch, since it’s not as though you can just connect it to iTunes like you can with an iOS device. It also wouldn’t be a bad idea to make sure your iPhone has enough battery power to run for 10–30 minutes, or to connect it to a charger during the update.

If for some reason the update won’t install, first try restarting your iPhone by holding the Sleep/Wake button until the Slide to Power Off switch appears, sliding it to the right, and then pressing the Sleep/Wake button again to turn the phone back on. If that doesn’t do the trick, try rebooting the Apple Watch by holding the side button until the Power Off switch appears, slide the switch from left to right to turn the watch off, and then press the side button again to turn the watch back on.

So far, we haven’t noticed any major changes with the update. Various functions may be slightly faster, but it’s hard to say for sure.

Apple Watch
Cookies & Privacy: We wish we were talking about chocolate-chip cookies here, but our Web site—like nearly all others—relies on a few minor digital cookies. Various laws around the world require us to tell you that fact, so consider yourself informed, if not nourished. By continuing to use this site, you agree to our use of these cookies. Cookie and Privacy Notice