I schedule many, many events. When you’re trying to line up six panelists for a podcast, email quickly becomes unwieldy, which is when I turn to Doodle, a Web service that allows you to poll people about their availability and figure out which time works best for as many people as possible.

For event organizers, starting a Doodle poll involves opening its Web interface and clicking Schedule an Event. You can create a Doodle account for free, but you don’t even need to do that in order to schedule an event or register your availability for someone else’s. An account is merely a matter of convenience if you use Doodle frequently, letting you keep track of all your open polls, both as an administrator and a participant.

When creating an event, all you have to enter is a name — descriptions and locations are optional. You can pick days from a monthly calendar or choose more specific times from a detailed weekly calendar view. There’s also a free text option if you don’t want to lock your event down to specific dates — i.e. “every other Monday.“ 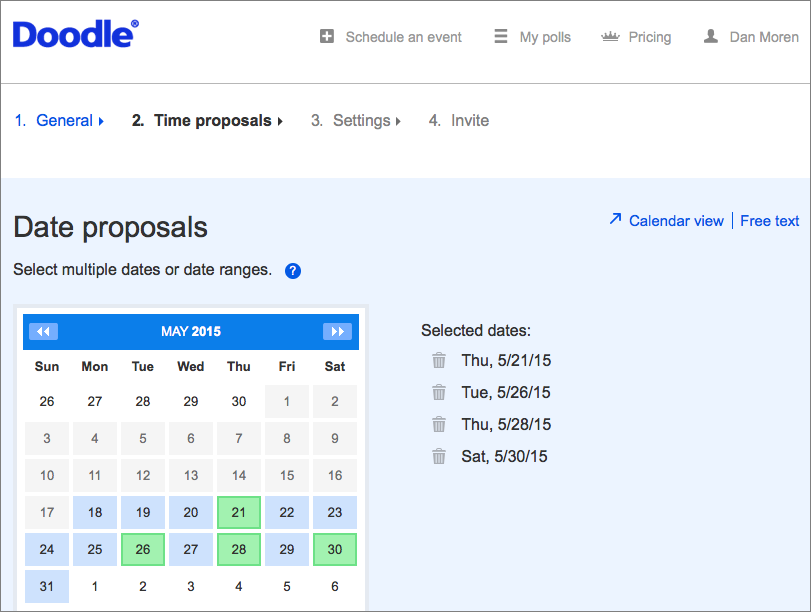 In today’s far-flung virtual society, it’s particularly helpful that Doodle offers support for time zones, letting you associate the times you offer with a particular time zone. That makes it much easier to wrangle participants from across the country or around the world. Also helpful is how the service gives you the option of adding as many time slots as you could reasonably want, as well as letting you copy your list of time slots from one day to the others, so you don’t have to tediously duplicate all that info.

By default, invitees can mark whether they are available or not at a specific time; as an advanced option, you can allow people to choose an “If Need Be” option. You can also limit participants to choosing only one time period, and close the poll after a certain number of people have entered their availability. In the latter case, it would at times be more convenient if you could specify closing the poll once a quorum of people have selected a time in common. Finally, you can create “hidden” polls, in which the results are shown only to the administrator, not to other participants.

Doodle conducts most of its business by email, sending messages to the people you invite to the poll (or letting you send the link manually to anyone you want to participate). That’s a plus, because email remains the lowest common denominator for electronic communication. The fact that participants don’t have to sign up for Doodle in order to register their availability is also great, since it removes barriers to people actually filling out the poll. 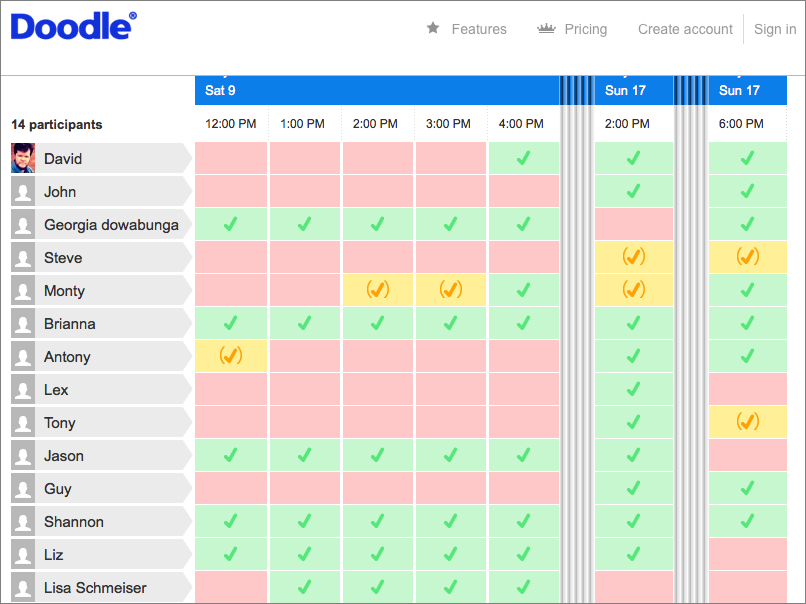 The Web interface for Doodle is pretty good, if not the most attractive. As an administrator, I particularly like the efficient way it collapses time slots with fewer responses, highlighting the times that the most people have in common. Color coding of slots — green, yellow, red — makes it easy to see at a glance when people are available. As a participant, it’s easy enough to click a link and fill out availability — I’ve used a Google Sheet for attendance tracking before, and it works well, but it takes far more setup than Doodle
does to get the same level of features and polish.

Doodle also has a free iOS app, and while it has recently been redesigned, I still have a few issues with it. First, there’s no iPad native version; it’s iPhone-only.

Second, I find the app’s interface difficult to use at times. For example, when I loaded a poll that I had created, it showed me a long scrolling list of times but acted as though I hadn’t filled it out — which I hadn’t, since as the creator of the poll, I had only put down times that worked for me. While it also displayed the number of people who said they could make a certain time, it wasn’t immediately obvious that tapping that number would show me who was available at that time — as opposed to anywhere else in that row, which marked my availability. There’s no demarcation at all between those two tap areas. It’s also hard to figure out at a glance who is available at the various times and compare
them. To its credit, the app does at least identify which times have the most people in common. 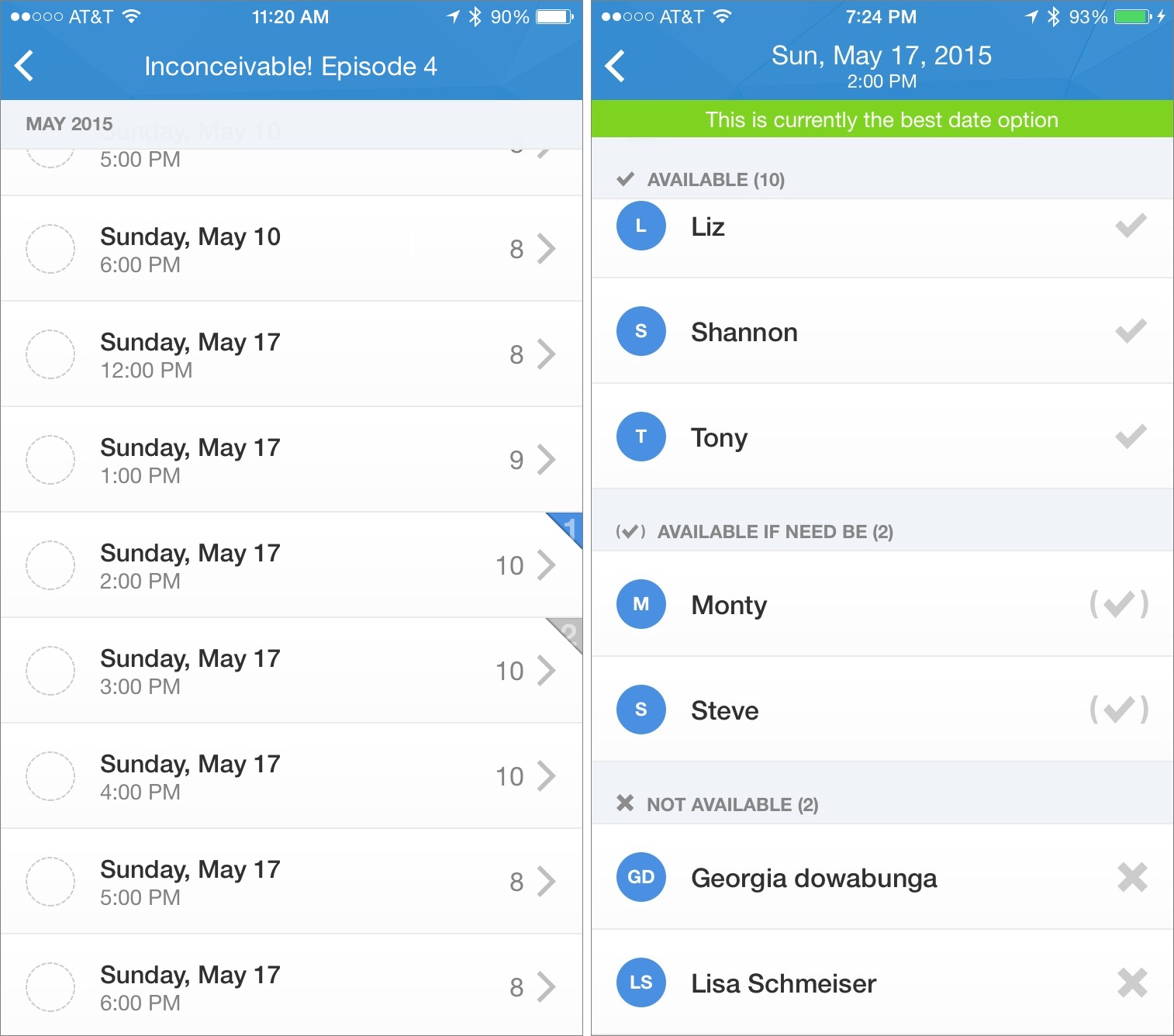 But my biggest frustration is also one of Doodle’s smartest moves. So much of Doodle is free that you’d be excused for wondering how the company makes enough money to keep the service afloat. Though the service does have ads, Doodle also offers premium features, some of which are pretty niche: SSL encryption if you’re concerned about the security of your poll, the option to request additional information (like postal address), and automatic reminders.

But the most attractive of the premium features, at least to me, is integration with your existing calendars from Google, Outlook, iCloud, and so on. This is particularly a big deal on the mobile app, because when I open a poll in it, I constantly need to flip back and forth between the Doodle app and my calendar to figure out if I’m available at the times listed. That integration will cost you $39 a year; businesses can also opt for an additional level of customization starting at $69 per year and rising depending on the number of premium users.

Overall, despite my gripes with the iPhone app, I find Doodle to be an invaluable scheduling tool. It turns what used to be a painful process of email lists, reply chains, and hair-pulling into something that is pretty much seamless. With such a low learning curve, it’s entirely worthwhile to invest the time in setting it up. And if you can afford to pay for the premium level of calendar integration, doing so makes Doodle even better.