We’re pleased to welcome as our latest long-term TidBITS sponsor Mapbox, makers of the Mapbox mapping platform for designers, developers, and cartography geeks of all stripes. Mapbox isn’t for home users, but it’s a compelling service for those who are integrating location into a mobile or Web-based app.

The company got its start helping international NGOs make data-driven decisions through location-based data, from mapping malaria in Western Africa to tracking the Afghanistan elections. Working with open-source tools and data, Mapbox launched its platform in 2011, signing up the White House, the Federal Communications Commission, and the Department of Education as early enterprise customers, with organizations like NPR and Foursquare integrating Mapbox maps soon after. Since then, Mapbox has maintained its open approach, relying on open mapping data from OpenStreetMap (think Wikipedia for maps) and making all its tools open source, including iD, the map editor for OpenStreetMap.

As with anything that involves location data, privacy is a key question. Mapbox worked with the Electronic Frontier Foundation to make sure they were doing everything right, which includes allowing all users to opt out of data collection, keeping data on a mobile device for no more than 60 seconds, aggregating collected data online and throwing away the details within 24 hours, and locking down access to stored data even for employees. It’s a thoughtful design that allows data to be fed back to the OpenStreetMap project without impacting the privacy of any contributor.

Mapbox’s numerous design options and features have made it a favorite of companies that want to use location data in their apps — the fact that it takes only a single line of code to add Mapbox to an iOS or Mac app doesn’t hurt either. For instance, Pinterest’s Place Pins are powered by a custom Mapbox map, as are the custom maps used by The Financial Times.

Since Mapbox is free to those who have up to 50,000 active mobile users and 50,000 views on the Web, it has also become popular with small developers. Other plans include a $5-per-month Basic plan, a $49-per-month Standard plan, and a $499-per-month Premium plan, along with custom Enterprise plans for large-scale users.

If you want try out what’s possible with Mapbox without coding anything, there are two quick options, both of which are free (though they do require an account). The online Mapbox Editor lets you choose a map style and add markers and interactivity. For more flexibility, there’s the open-source Mapbox Studio app. I won’t pretend to know much about cartography, and I’m certainly no designer, but it took me only a few minutes to create this map (in the Pirates style!) of one of my running routes, with data from my Garmin Forerunner GPS watch. 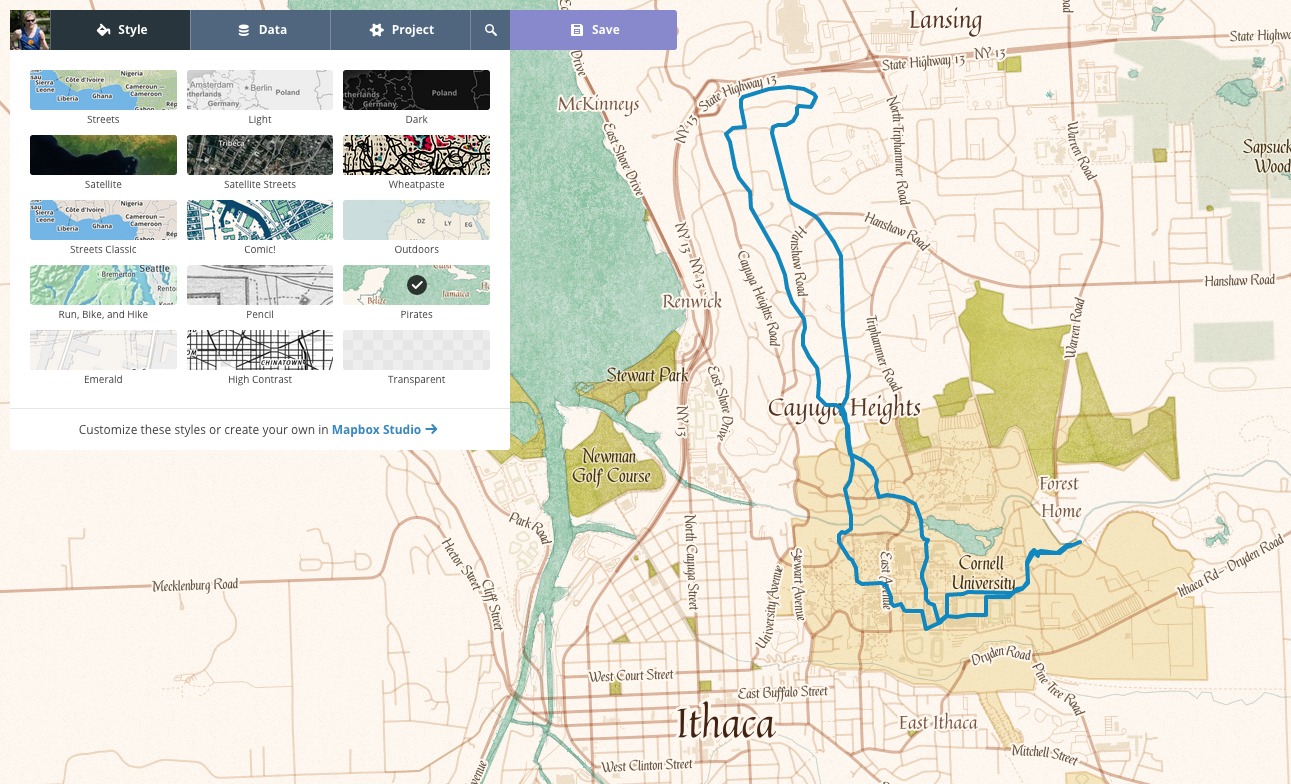 Thanks to Mapbox for their support of TidBITS and the Apple community!

Enterprise Inside TidBITS Media Creation
Cookies & Privacy: We wish we were talking about chocolate-chip cookies here, but our Web site—like nearly all others—relies on a few minor digital cookies. Various laws around the world require us to tell you that fact, so consider yourself informed, if not nourished. By continuing to use this site, you agree to our use of these cookies. Cookie and Privacy Notice