The largely opaque combination of Photos and iCloud Photo Library is out of control. I can’t guarantee these issues will apply to everyone, but consider yourself warned.

I recently wrote about how enabling iCloud Photo Library causes Photos to monopolize your Internet connection as it uploads your photos to iCloud, and I offered a way to mitigate the annoyance (see “How to Throttle iCloud Photo Library Uploads,” 20 May 2015). It took over a week for my 27,000+ photos to upload, and that’s using an Internet connection with 5 Mbps of upstream bandwidth, throttled to 3.5 Mbps.

Luckily, unlike many people, I don’t have a data cap for my Time Warner Internet connection, so at least that wasn’t a problem for me, as it might be for you. Where I did run into trouble is with my iPhone, on which I’m using the Optimize iPhone Storage option to reduce the amount of data transferred and stored. Tonya, Tristan, and I now share 2 GB of data on our family plan, and before last month, we had never come close to using that much, since we’re still accustomed to having only 250 MB each. So you can imagine my surprise shortly after I enabled iCloud Photo Library when AT&T texted me to say that I was approaching my 2 GB limit. I looked through the cellular data usage screen in Settings > Cellular, and pored over the
app-specific information in DataMan Pro, but all I was able to determine was that lots of data had been used in the Documents & Sync category of System Services.

There are no settings to prevent iCloud Photo Library from working over cellular, and while I disabled cellular data for the Photos app, that made no difference. I could turn off cellular data in general (and I did once or twice, but that’s a hard thing to remember every time you leave the house), but by the end of the billing period, AT&T had hit me with $30 of overage charges for two $15 blocks of 1 GB of additional data.

This is shockingly poor design on Apple’s part, and I hope to see it fixed in iOS 9. The entire point of iCloud Photo Library is to transfer huge quantities of image data, and it’s disrespectful for Apple not to provide a switch to prevent iCloud Photo Library from chewing through cellular data.

A question was recently posed on the discussion page for the iCloud chapter of Jason Snell’s massively popular “Photos for Mac: A Take Control Crash Course,” asking if repairing the Photos library (by holding down Command-Option at launch) would force everything to be uploaded to iCloud Photo Library again.

I couldn’t imagine that this would be the case, and said so initially in my reply while I was waiting for my test repair to finish. And when I looked at the iCloud pane of Photos’ preferences window at first, there was no notable activity. A few minutes later, though, I looked back, and it said that it was uploading 27,552 items. Not good. However, some apps, like CrashPlan, report that they’re doing more than they are, because they’re actually analyzing the data, not uploading, and they eventually realize that no new data needs to be uploaded; I hoped briefly that this was the case here too.

Unfortunately, when I looked at the Network view in Activity Monitor, the nsurlsessiond process had clearly started sending a large quantity of data. And some spelunking in Console revealed this log entry: 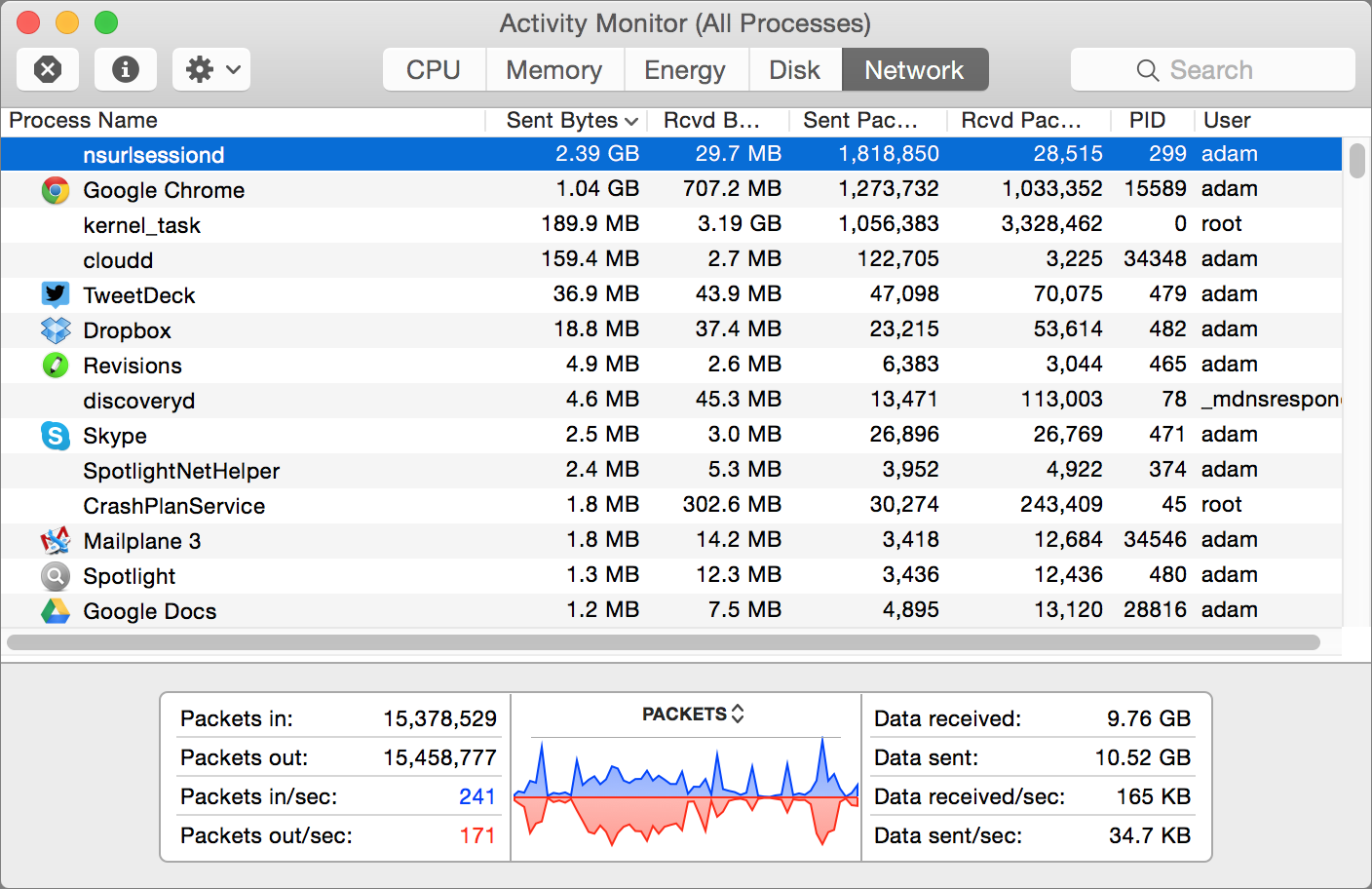 Although I was initially concerned that Photos would upload my entire library again, and that iCloud Photo Library would download it all to my iPhone again, potentially incurring additional overage charges, it appears now that the situation isn’t that worrisome.

Over the course of several days, Photos counted down from the initial 27,552 items to upload. It did impact my Internet performance until I enabled Network Link Conditioner to throttle it, but even so, the upload process worked much faster than the initial seeding to iCloud Photo Library. In the end, the nsurlsessiond process sent 7.67 GB of data, and a another process called cloudd also uploaded several gigabytes that might have been related, but that’s nothing compared to the 111 GB size of my full Photos library. Even better, as far as I can tell, my iPhone hasn’t had to download any notable amount of data again. Hopefully, others will share my experience.

However, Spotlight (in the form of the mds process) has been going nuts on my Mac for many hours after the upload. There’s no way to know exactly what it’s doing, but a commenter on this article also noted that Photos uploaded a lot of data to iCloud Photo Library after he restored his Mac from a Time Machine backup. Spotlight indexing data isn’t backed up by Time Machine, so that points to iCloud Photo Library relying on Spotlight in some core fashion.

Regardless of what’s happening behind the scenes, the takeaway message is that certain actions, like repairing a Photos library or restoring from backup, can trigger a significant, if not complete, iCloud Photo Library upload. Those actions often aren’t optional, but beware that they have additional consequences when iCloud Photo Library is enabled.