Apple users have been in love with docks since the days of the original iPod dock. Sadly, Apple has not consistently met this need for iPhone users over the years.

The company once sold Lightning-based docks for the iPhone 5c and 5s (the latter backward-compatible with the iPhone 5, see “A Game of Docks: Apple Versus Twelve South,” 25 September 2013). But these cradles were so customized to their corresponding phones, with grooves contoured precisely for the handsets’ bottoms, that they were rendered obsolete with the arrival of the iPhone 6 and 6 Plus. After that, Apple provided no dock at all. This caused me no end of frustration.

Now, at last, Apple has released the iPhone Lightning Dock, with a much more accommodating base. It will work with any Lightning-based iPhone or iPod touch, often even if it’s in a protective case, which wasn’t true of Apple’s earlier Lightning docks.

The new dock is a delightfully minimalist, shiny-white contraption. It is little more than a pedestal with a Lightning prong protruding from it.

It is not, however, the only dock I have considered. Months ago, without an updated Apple dock in sight, I began scrutinizing third-party alternatives.

My key criteria for such a dock: it must accommodate all Lightning-era iPhone models, ranging from the relatively compact iPhone 5 to the comparatively large iPhone 6 Plus — and do so not only with a naked iPhone but with one in a protective case.

I tested with an iPhone 6 and iPhone 6 Plus that I sheathed in cases of varying bulk from the likes of Incipio, Seidio, and Zuna Designz. If a dock works with these iPhones and cases, it will presumably work with any future iPhone, assuming Apple makes no huge design shifts, such as a switch from Lightning to USB-C for charging and syncing.

My dock requirements helped me narrow down my choices to just three iPhone cradles in addition to Apple’s offering.

Grovemade — Most iPhone docks have a design flaw: they aren’t heavy enough to allow for one-handed gadget removal, without a second hand to hold down the dock during device extraction.

Grovemade addresses this first-world problem with heavy metal docks that, for a bit of aesthetic pizzazz, feature real wooden covers. The overall effect is groovy, if a bit over the top for my tastes, with a choice of black- or silver-colored steel for the dock, and maple or walnut for a cover. You must supply your own Lightning cable. 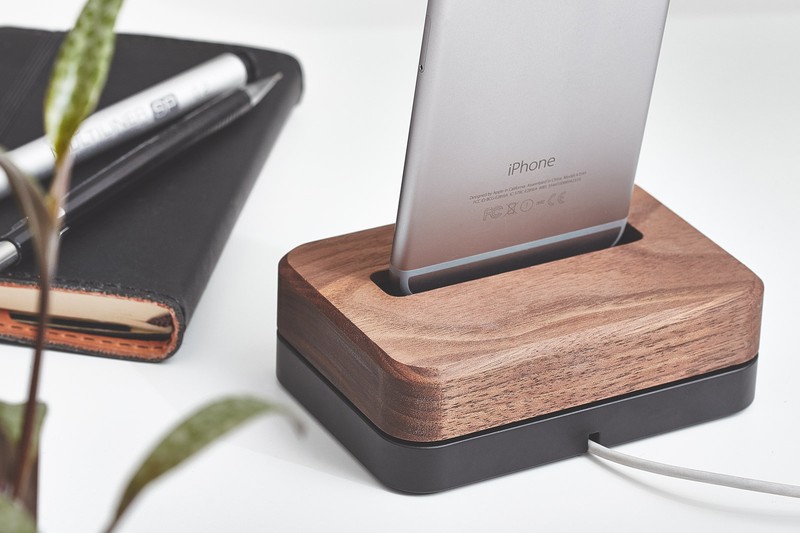 Setting up my loaner dock — a walnut variant with a black base — was tricky because of an unusual internal design it shares with all the other dock variants.

Assembly partly involves inserting a plastic component (vaguely resembling scissors or pliers) that holds the Lightning prong in place. Beware: the plastic piece is fragile, and I broke two before I figured out how to insert the component properly. (The dock kit as provided to consumers contains two; luckily I was able to beg Grovemade PR for replacements.)

Once I completed the procedure, I found the Lightning prong was a bit askew. This meant my iPhones rested at a slight angle when docked. I imagine most will not be overly bothered, but it drove this OCD sufferer crazy. No amount of futzing and component swapping fixed the problem.

But the three-pound dock functioned as advertised in letting me remove my iPhone with a one-handed yank. This isn’t possible with the other, more-lightweight docks, which require two-handed extraction.

The Grovemade dock in all of its permutations costs $99. A “special edition” version in brass and walnut runs $149.

The wooden caps are available with slots in a variety of sizes to accommodate different iPhone models, but I suggest getting your cap with the largest available opening so it will work with any iPhone or iPod touch, even in many protective cases — past, present or future.

Belkin — This longstanding creator of Apple accessories has an extensive line of docks for iOS devices, including those with Lightning ports, 30-pin variants and even micro-USB — the last of those three would apply to iPhones in battery cases, such as Mophie models, that have micro-USB ports for simultaneous charging of the phones and cases.

For the purposes of this article, I’ll focus on Belkin’s $29.99 Cradle with Audio Port for iPhone 5, which is older than most but more versatile than newer Belkin docks in spite of its name.

The Cradle with Audio Port meets my key criterion of accommodating all iPhones (and even, in this case, iPads) — naked or in cases.

I emphasize this point since newer Belkin docks are far less accommodating, accepting only the thinnest of iPhone cases. This is partly because the Lightning prongs built into those docks are flush with accessories’ bottoms.

These problematic iPhone docks include the Mixit Lightning ChargeSync Dock and the Express Dock for iPad.

Belkin notes that its newer docks are intended to be used with cases that have “a wide port opening for a full user experience.”

The Cradle With Audio Port has a different design: it consists of two attractively understated and magnetically joined pieces, one silver and one black, which you separate in order to add your own Lightning cable.

That cord threads along a hidden canal in the dock’s bottom, and the Lightning connector pops out of a hole on top. The connector rests high enough to accommodate just about any conventional iPhone sheath (excluding huge versions for waterproofing from the likes of OtterBox). 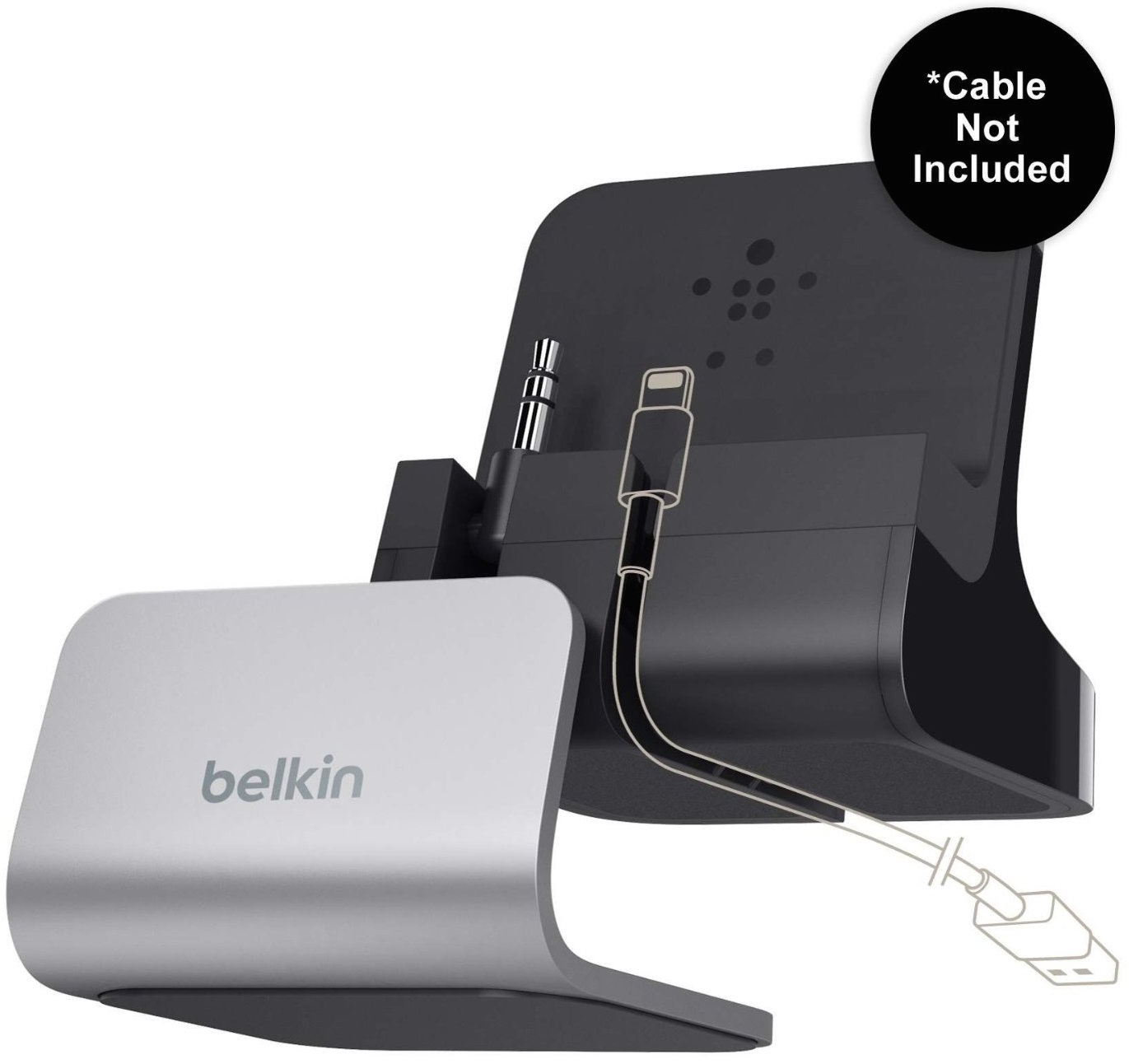 This cradle’s use of an add-on cable requires occasional futzing to re-seat the prong if it wiggles upward from its dock orifice, but this is a minor problem.

The Cradle with Audio Port has another small issue, as its name suggests. It incorporates a 3.5-millimeter audio plug that slips into the audio port of a docked iPhone 5 or iPhone 5s, along with an audio port in the back for jacking into external speakers. This feature won’t work with larger iPhone 6 and 6 Plus models because their audio ports don’t line up properly with the cradle’s audio plug.

Fortunately, the plug folds down into the dock base if it isn’t needed, which means current-model iPhones will fit into the cradle just dandy — though without access to its built-in audio features. 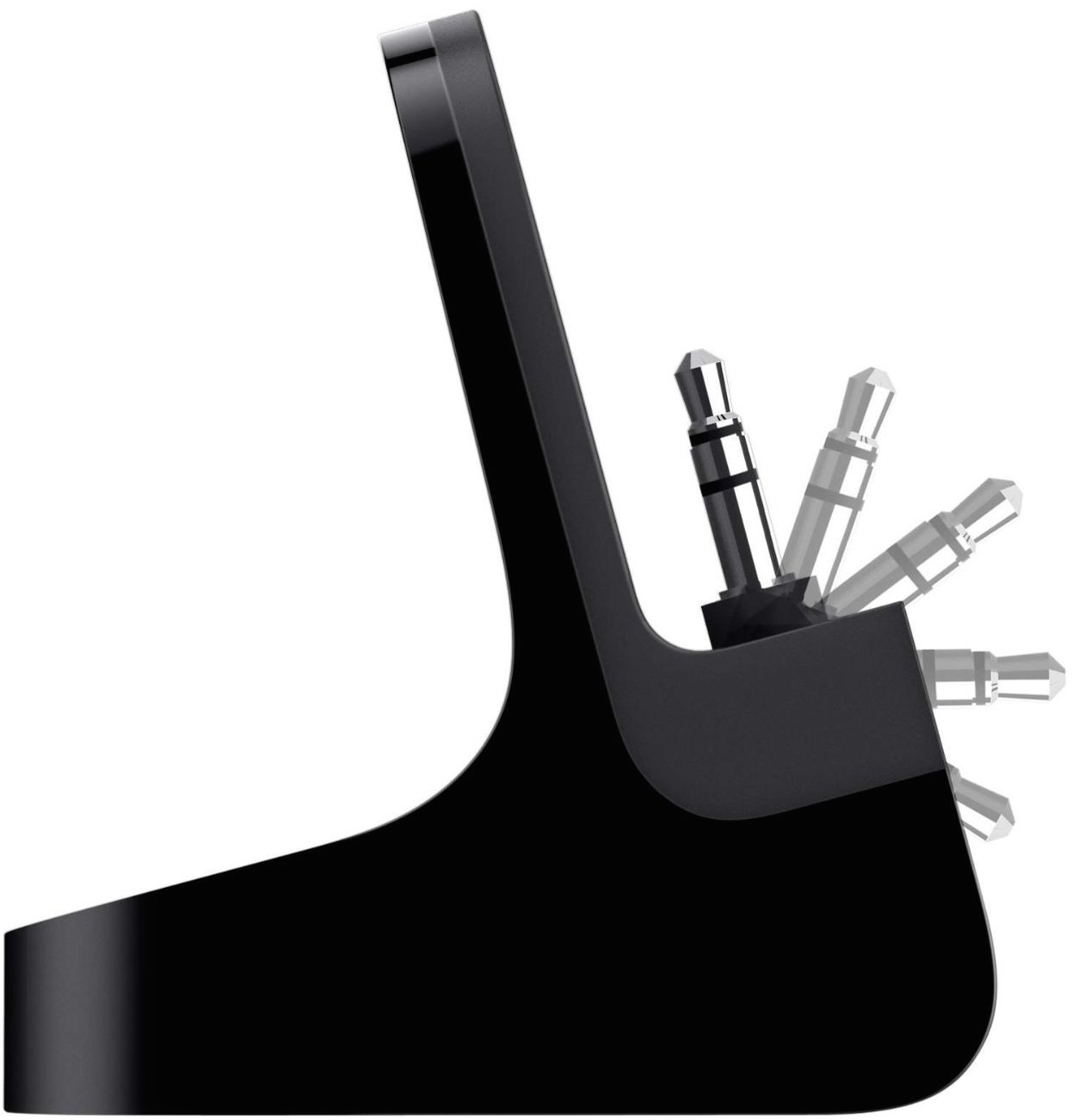 Unlike the Grovemade dock, the Belkin dock is not hefty enough to allow one-handed handset removal – that is, without another hand holding the dock down to keep it from being lifted up along with the phone.

Twelve South — This high-profile accessory maker has offered a HiRise dock with a unique pedestal design for a while. 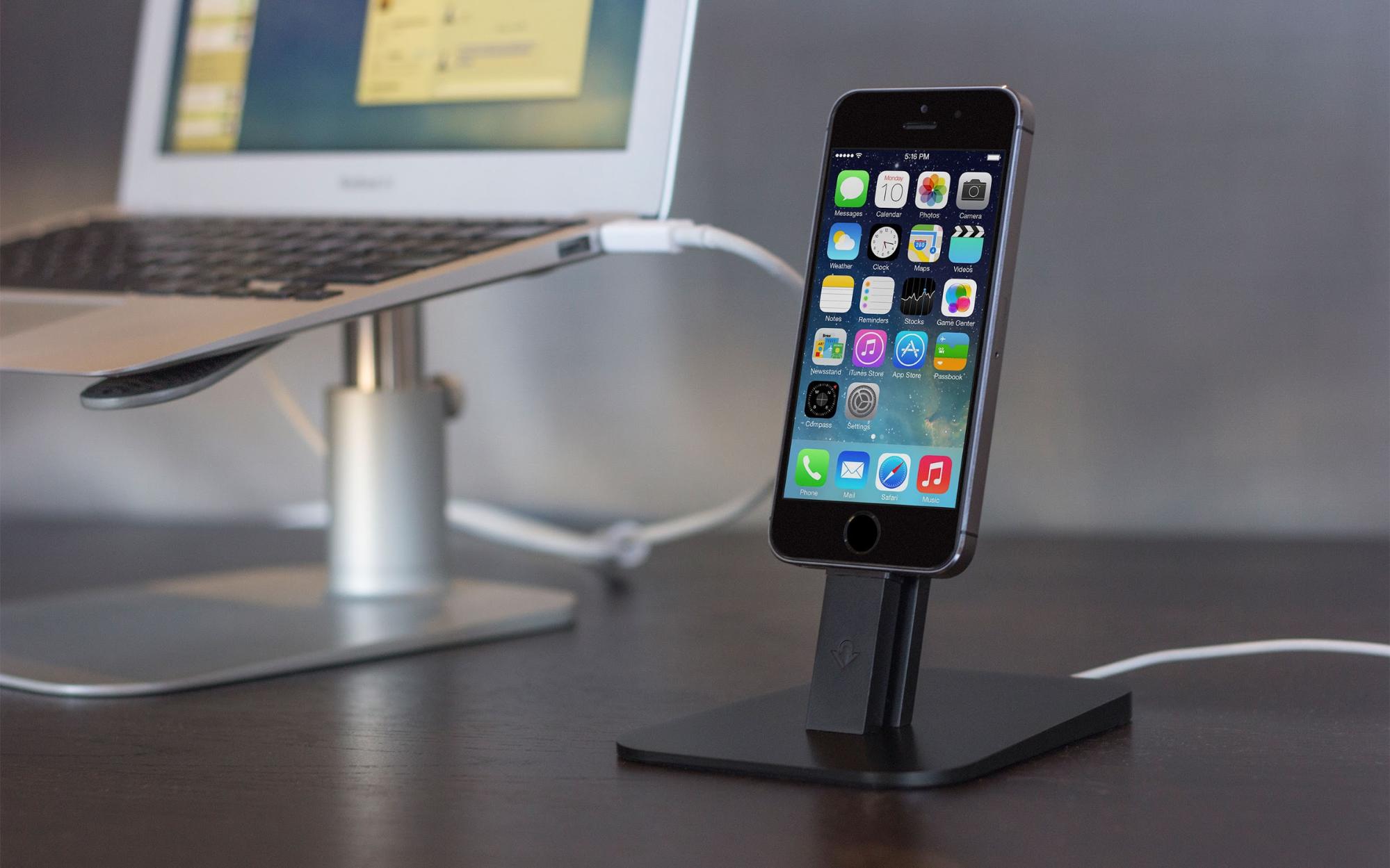 I won’t spend a ton of time on it since TidBITS Managing Editor Josh Centers reviewed the dock a while back (see “A Game of Docks: Apple Versus Twelve South,” 25 September 2013).

Josh highlighted the dock’s flexibility in accommodating any Lightning-based iPhone, with or without a case, or even an iPad mini (but not a full-size iPad). But, he added, “with great flexibility comes great complexity. The HiRise is less of a dock and more of a hobby kit.”

That is still somewhat true, though with design refinements to make assembly a bit easier, and I must say I enjoyed putting together my review unit. My loaner is a slightly updated version, the $59.99 HiRise Deluxe, which didn’t exist when Josh wrote his piece. (The original HiRise is still sold in its hobby-kit form for $34.99.) 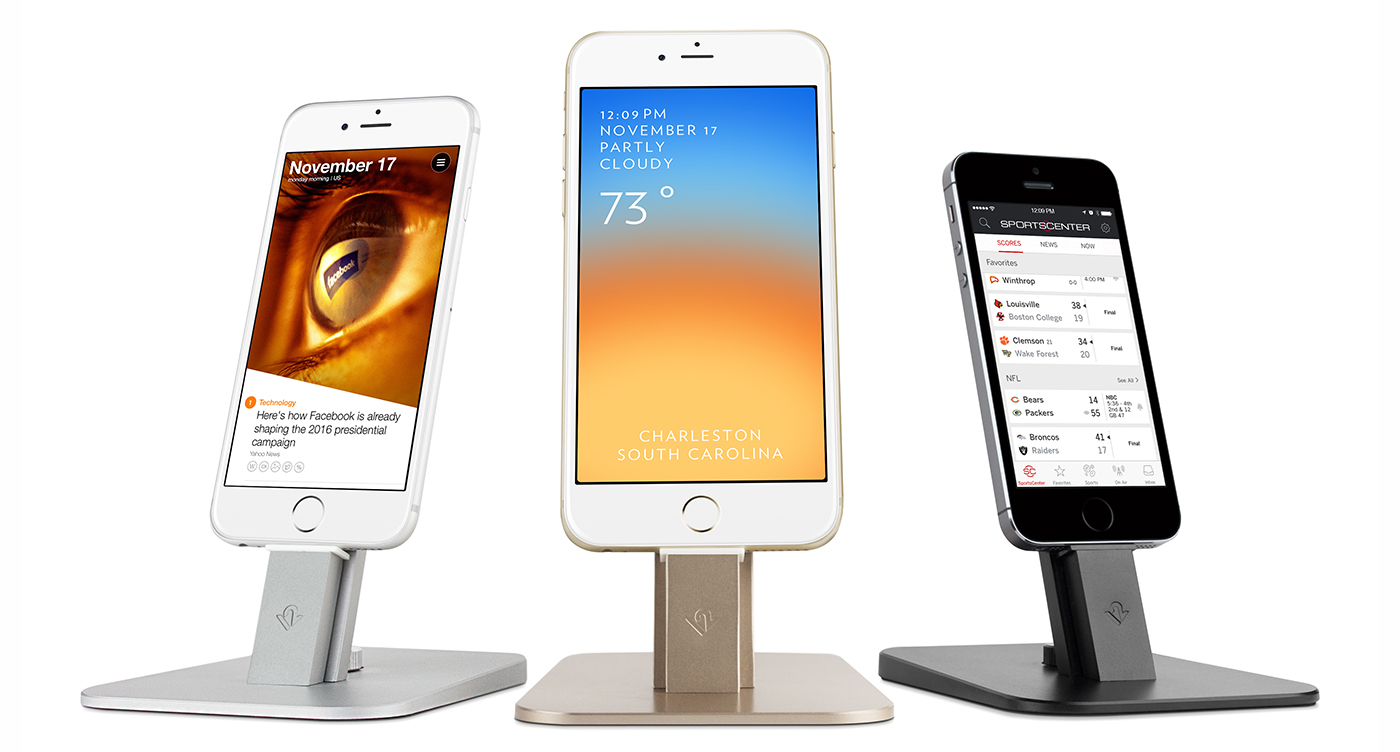 Enhancements in the HiRise Deluxe version include a gold option along with silver and black, a metal dial for easier adjustability, a subtly restyled base, and inclusion of a micro-USB cord (along with a Lightning variant) for those using an iPhone in a battery case. 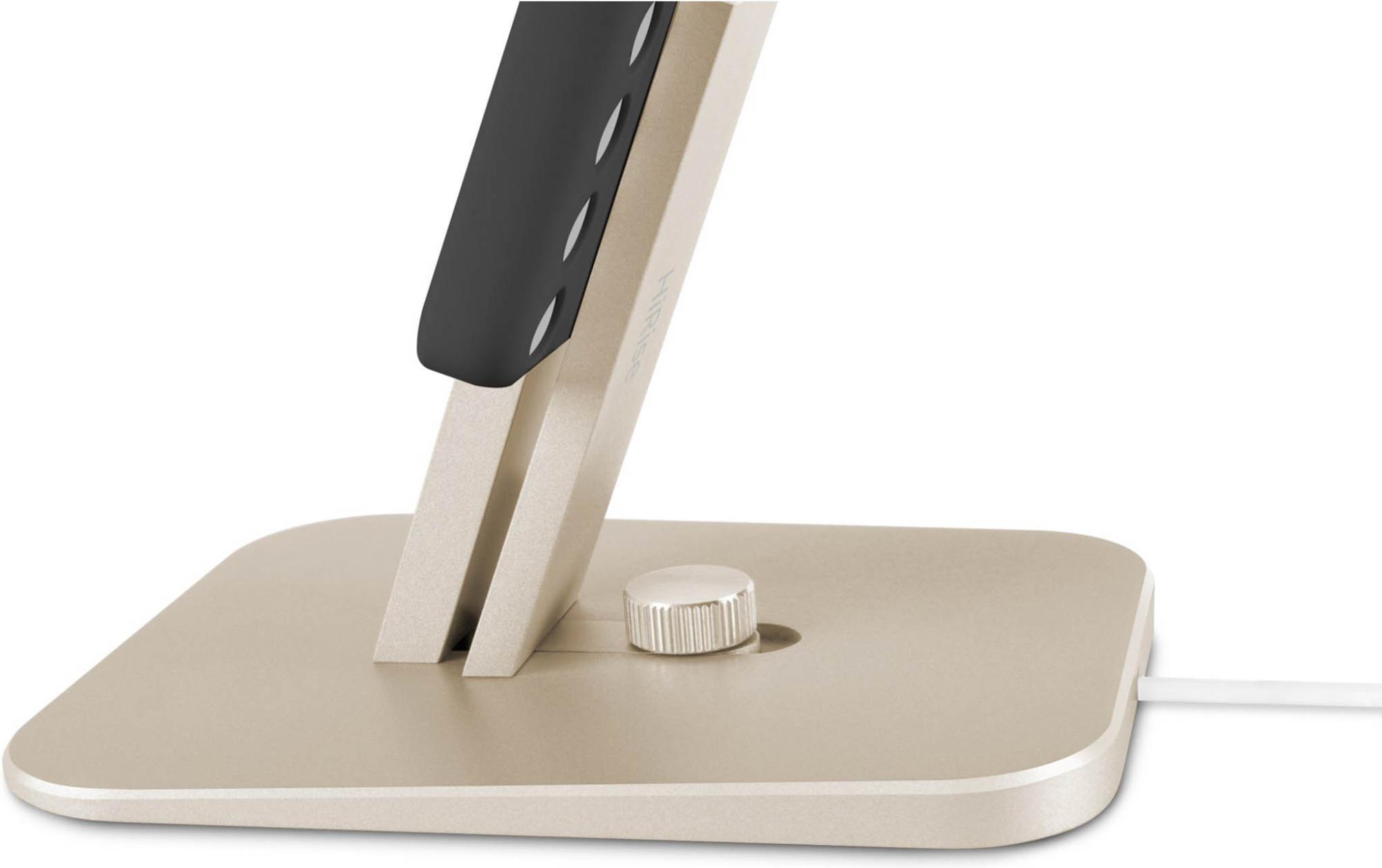 One of the bundled cords in the HiRise Deluxe kit is required since they’re customized for the stand, which means a standard Apple Lightning cord or generic micro-USB cable won’t work. Twelve South throws in tiny plastic spacers to make the Lightning or micro-USB prong sit at different heights depending on how thick your iOS device (with or without a case) is.

The HiRise Deluxe, like the Belkin dock, is not heavy enough for one-handed phone removal – at least not the standard way, which involves grabbing the phone with one hand, and lifting upward. Try this, and the stand also rises, still attached to the bottom of the handset. But Twelve South suggests a clever workaround that requires a minor hand contortion.

Apple — The $39 iPhone Lightning Dock is One Infinite Loop’s KISS (keep it simple, stupid) reply to third-party accessory suppliers. Indeed, the makers of the third-party docks in this roundup have tended to overthink things a bit; that is particularly true of the complex Grovemade and Twelve South offerings.

The Apple cradle could not get any simpler: it’s a small, white platform with a Lightning connector near the front edge, protruding at a backward angle, along with ports in the back for a Lightning cord (not included) and a 3.5-millimeter audio jack. 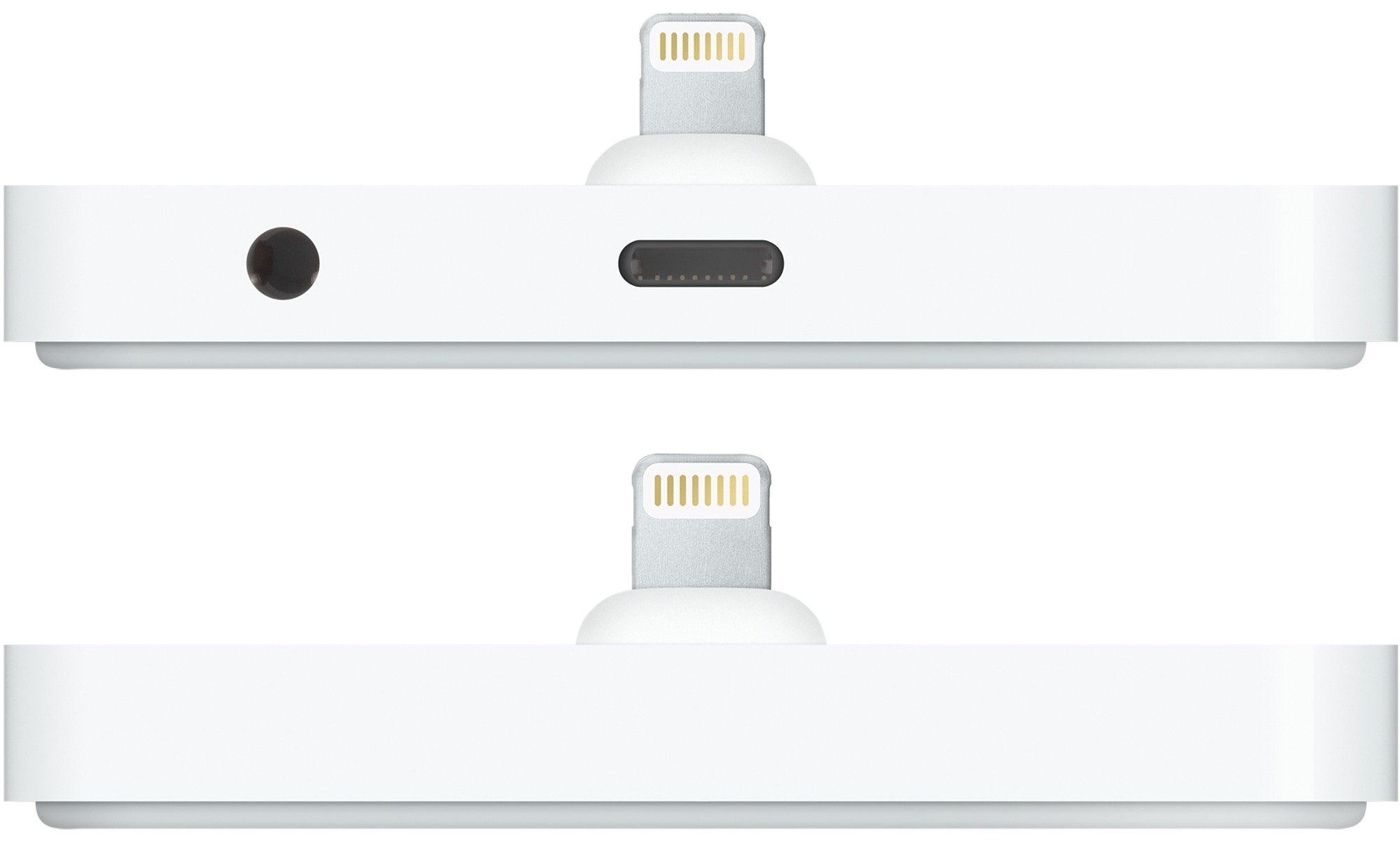 There are no moving parts, and nothing to put together (aside from having to plug in a Lightning cable that you supply and, optionally, an audio cable). The dock just works with minimum fuss.

The audio port can be used with external speakers or as a completely functional replacement for the iPhone’s headphone port (which is inaccessible when the handset is docked). Plug in your Apple EarPods, and they have full control of the phone, just as though they were jacked directly into the device.

Apple has taken care to make its dock compatible with many third-party cases, including its own (though it makes no mention of cases from other companies). All of my sample third-party cases worked with it, except for one iPhone 6 Plus model, the Zuna Drive case from Zuna Designz, which is on the bulkier side.

As with most other docks, you’ll have to hold down the Apple dock with one hand while using the other to pull the handset loose.

Conclusion — For iPhone owners, all the docks in this roundup are fine choices, at least in terms of compatibility with many third-party iPhone cases.

Belkin’s dock is a bit on the fiddly side, but it’s compact and attractive, and it accommodates iPads as well as iPhones.

The Grovemade product is a bit of a Frankendock, and I’m not wild about its aesthetics, but it mostly works as advertised. It’s the only one with enough heft to allow easy one-handed handset removal.

Twelve South’s HiRise Deluxe is an excellent option, once you have puzzled through its complex assembly. It has a clever design, and compatibility with iPad mini tablets is a plus.

In the end, though, Apple’s own iPhone Lightning Dock has the cleanest and simplest design, and that makes it my favorite of the bunch.

Comments About Apple’s New iPhone Dock Versus the Competition