New technologies can be exciting, but it often takes us a while to figure out how to take advantage of them, as is happening now with the Apple Watch. Back in the early 1990s, CD-ROM was the tech du jour, and developers were inspired by how much more data they could store than floppy disks. You could even play video on a computer! And, like little kids with a new toy, developers went a bit overboard (our own Michael Cohen was on the ground floor of the CD-ROM revolution; see “The Birth of the Ebook,” 17 July 2014).

Interactive movies were nothing new, even then. They date back to the 1960s, and Don Bluth’s Dragon’s Lair was a smash-hit when it debuted in 1983. But with the sudden accessibility of CD-ROM technology, the genre came back with a vengeance. The market was flooded with games based on full-motion video, such as Under a Killing Moon, The Beast Within: A Gabriel Knight Mystery, and the controversial Phantasmagoria.

The problem was, almost all of them were terrible (I listed the better ones). Technology at the time severely limited the video quality. The acting fell somewhere between a workplace instructional video and late-night Cinemax. But most of all, the gameplay was often lousy. Since everything in the game had to be (expensively) pre-recorded, many interactive movies had fixed paths, and you had to know the exact thing to do at the exact time, or be faced with a frustrating “game over” screen. I wasted more time than I care to admit playing Johnny Mnemonic, and I don’t think I completed even five percent of the game.

Not only were interactive movies bad, they were expensive to make. Ground Zero: Texas, a truly awful game, cost Sega between $2 and $3 million, which was astronomical at the time. It wasn’t long before the technology gave way to 3D rendering.

But maybe the format has a second chance. Her Story is an interactive movie for the iPhone, iPad, and Mac that breathes life into a dead art form. It was created by Sam Barlow, creator of Silent Hill: Shattered Memories, and stars actress and musician Viva Seifert. The multi-platform desktop version costs $5.99 from the Her Story Web site, while the iOS version costs $4.99. Note that it’s a large download — the iOS version is a hefty 1.76 GB. For this review, I played through Her Story on my iPhone 6.

Her Story is a game only in the loosest sense of the word. You sit at an old computer terminal, searching for and viewing short clips of an interrogation from 1994 (about the height of the last interactive movie craze). The goal of the game is to watch all of the clips, and you’ll know you’re done once you receive an instant message. The interactivity of the game comes from how you reveal the story. It’s possible to skip straight to solving the mystery of what exactly happened, or you could take a long, winding path that leaves behind more questions than answers. Fortunately, you can pin video clips you find interesting, so they’re easily accessible later. You can also tag clips with your own notes. 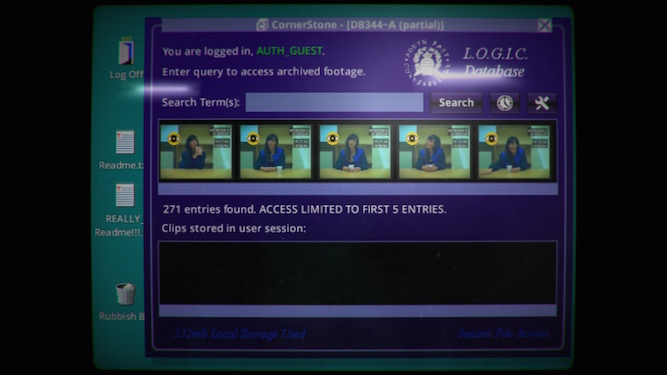 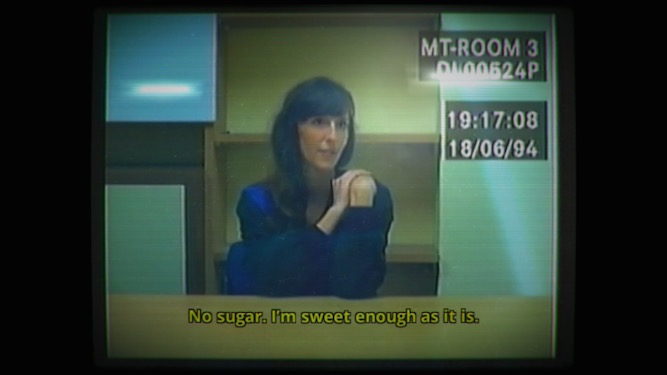 If that description seems vague, I apologize, but I can’t say much without giving away major plot points; I’d hate to spoil such a lovely, twisted plot! Seifert gives a believable performance, and fans of “True Detective” and “Twin Peaks” will enjoy watching the macabre story unfold. Once you start uncovering the
backstory to the main plot, you won’t want to stop. Note that there is some adult language, so this isn’t a game to play while the kids are around.

One of the great things about Her Story is that you don’t have to be a gamer to enjoy it. If you know how to use a search engine and watch video, you have the skills to play the game. It takes only an hour or two to discover and watch all the clips (about the length of a feature-length film), but you’ll probably have as many questions as answers by the end, so it’s worth replaying. I’m looking forward to trying a group viewing in the living room with AirPlay.

If you feel at sea after getting started, I can offer some tips. Her Story starts you off with a few pre-loaded clips. Watch those, taking notes about keywords to search for, like names or events — having a notebook at hand isn’t a bad idea. When you reach the end of the clips, search for those keywords to discover more. Sometimes you might hit a dead end, and if you do, try searching for random keywords until you find something new. Following these tips, you should be able to discover all of the clips in a reasonable amount of time.

I also recommend checking out the settings, accessible by tapping the wrench icon. By default, the in-game computer monitor has an annoying glare, which you can disable with the Anti-Glare Filter setting. Also, you can tap Delete Session Data to start the game over from the beginning.

Her Story succeeds where others failed because Barlow understands the limitations of the medium. Prior attempts at interactive movies tried to blend traditional video game mechanics with pre-recorded video, and the two just aren’t compatible. Her Story is true to its medium, by being less of an interactive experience and more of a passive one. And Barlow wisely minimized both set and actors to maximize quality without a huge budget. The only set is an interrogation room, and Seifert is the only actress.

The irony is that while 3D game development has become exorbitantly expensive, video production becomes ever cheaper. A modern big-studio game can cost up to $140 million to produce, making the millions spent on Ground Zero: Texas chump change, even taking inflation into account. And that game could probably be remade today, with better production values, by high schoolers equipped with iPhones and Macs.

For many small developers, the question might be: “Why spend millions of dollars trying to create film-quality graphics when we can do real video for thousands of dollars?” Granted, a 3D render will never have an on-set tantrum like an actor might, at least unless the game’s AI engine is being tweaked simultaneously.

Who knows, maybe Her Story will inspire a new wave of interactive movies that take advantage of both the huge leaps in film production and the spread of mobile devices. As developers look at how to bring in more casual players and non-gamers, the relatively passive interactive movie format might just be the ticket.